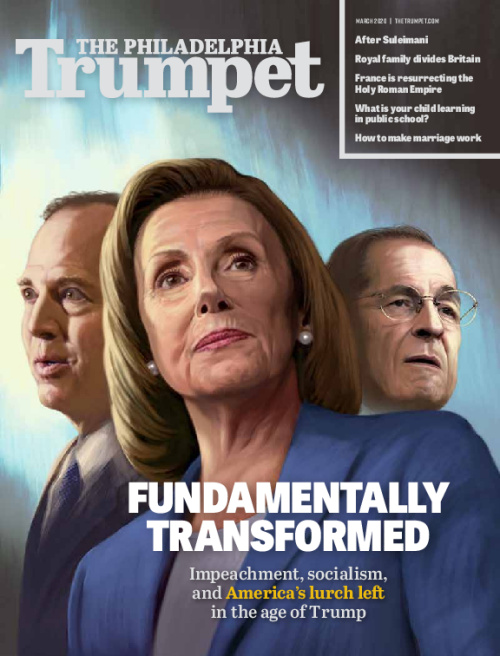 From 2018 to 2019, the value of German armament exports rose from $4.8 billion to more than $8 billion. Controversial sales to “third countries” outside the European Union and NATO rose by almost a billion euros. These weapons are often purchased by regimes that commit human rights violations and are directly used in regional conflicts. Yet last year, Germany supplied firepower to Algeria, Egypt, the United Arab Emirates, Qatar and Indonesia, among others.

Germany’s Ministry of Economic Affairs states: “Arms exports are not a means of economic policy. Whether arms exports are approved depends on foreign and security policy considerations in each individual case.”

German weapons exports are a tool for building not only Germany’s weapons industry and national security, but also strategic partnerships and alliances. Psalm 83 prophesies that Germany, the modern descendant of ancient Assyria, will ally itself with some of the Arab nations it is currently arming. Daniel 11:40-45 show that this alliance will eventually fight Iran.

United States President Donald Trump shut down the most significant energy project in the world on Dec. 20, 2019, by signing into law the 2020 National Defense Authorization Act. The law sanctions companies involved in the project, and as soon as the president signed it, Allseas, the Swiss-Dutch engineering company laying pipe for the Russian-German Nord Stream 2 pipeline, immediately stopped work.

Whether work will resume on the last 13 percent of the project remains to be seen, but even a delay helps Poland, which is working on several projects to end its dependence on Russian energy, including a pipeline with Norway.

The Nord Stream 2 project is one of the best examples of Germany turning away from its former ally, the United States, and toward its former enemy and historic adversary, Russia. Germany is actually expanding Russian power in Central and Eastern Europe rather than continuing NATO’s policy of keeping Russia out. The situation is so serious that the U.S. used a powerful economic weapon that it only rarely employs.

Trumpet editor in chief Gerald Flurry described the significance of this pipeline conflict in “Germany and Russia’s Secret War Against America,” showing that a prophecy in Jeremiah 1:13 applies to modern Germany. It describes “a seething pot; and the face thereof is toward the north.”

“This symbolic language is describing modern Germany,” wrote Mr. Flurry. “Beneath the surface, that nation is full of simmering dissatisfaction with the current world order. Germans are angry at the U.S., and especially furious with President Trump. The imperialistic ambition that prompted Germany to start both world wars is alive and well. It is ‘seething’!”

This sends an alarming message about America’s declining popularity in Europe. Germany has been an ally of the U.S. for decades because of American financial support and shared democratic ideals. But that stable relationship is quickly deteriorating. An increasing percentage of Germans are beginning to despise their allies on the other side of the Atlantic.

Clearly, America’s alliance with Germany and the post-World War ii order is crumbling. The Bible prophesies that not only would these two nations fall out, but that Germany will actually lead an attack against America. To understand where the current political crisis between Germany and America is heading, read our article “Europe and America: They’ve Lost That Loving Feeling.”

Ethiopia is suffering severe divisions, and elections scheduled for May could become violent. Africa’s second-most populous nation is divided between supporters of a stronger central government and supporters of stronger individual states, as well as between its nine regions, between ethnicities, and between Christians and Muslims. Conflicts between Ethiopians often become violent and are now reaching a new extreme.

In 2018, the division left hundreds of Ethiopians dead and almost 2.9 million displaced. The central government is weak, and conflict is expected to worsen ahead of May 2020 national elections.

Daniel 11:40 prophesies of a power bloc called “the king of the south.” The fulfillment of this prophecy is modern radical Islam, led by Iran. Ethiopia is specifically mentioned as part of this bloc. Radical Islam thrives in civil unrest, and Iran has worked in Central and East Africa for decades. Watch for Iran to take advantage of Ethiopia’s volatility.

A Chinese freight train passed through the Marmaray Tunnel in Turkey in November 2019 on its way to Europe, marking the completion of a major transit point of the Trans-Asian Railway.

“[I]t will be remembered as the first freight train to pass from China across central Asia and under the Bosporus Strait, using the Marmaray tunnel,” Geoffrey Aronson wrote for the American Conservative on Dec. 6, 2019, calling the railway route the “Suez Canal of our era” and an “Iron Silk Road” that is not just a major “time saver,” but provides “the added bonus of circumventing sea routes now controlled by the West.”

Hundreds of related infrastructure projects in more than 60 nations are linking Asia and Europe economically in an unprecedented way.

Bible prophecy forecasts a powerful “mart of nations” trade bloc will form in our lifetimes. Isaiah 23 and Ezekiel 27 show that “Chittim” (modern China) and “Tyre” (a symbol of modern Europe’s economic power), Japan, Russia and other powers will form a powerful trade bloc that will briefly control global commerce. Deuteronomy 28:52 shows that this trade partnership will harm the descendants of ancient Israel, particularly the United States and the United Kingdom. Request Isaiah’s End-Time Vision to learn more.

New alliances forming in the Mediterranean

On January 2, Israel, Cyprus and Greece signed a deal to build a new pipeline that will pump gas reserves from Israeli and Cypriot waters into Greece. A later project is planned to connect Italy. The $7 billion pipeline is expected to supply 10 percent of Europe’s natural gas needs.

Turkey, which was left out of the deal, is working to thwart it. It signed an agreement on Nov. 27, 2019, with the Libyan Government of National Accord that sets the two nations’ maritime boundaries to cut straight across the proposed pipeline route. Turkey, which already has a major military presence on Cyprus, is also planning to establish a naval base in Northern Cyprus and to send drilling ships into Cypriot waters.

Although its population and economy are small, Cyprus occupies an important strategic location. Watch for Turkey and Europe to maneuver for control of the island. To understand the critical role Cyprus may well play in end-time events, read Gerald Flurry’s article “Why Germany Conquered Cyprus.”

Since January, nearly two dozen nations have been involved in several separate maritime security missions in and around the Persian Gulf in response to recent attacks by Iran.

On Nov. 7, 2019, a U.S.-led naval coalition launched Operation Sentinel from its headquarters in Bahrain to secure global trade in the Persian Gulf. Warships are escorting cargo vessels just 15 miles off the Iranian coast through the Strait of Hormuz, an important waterway serving one third of the world’s maritime oil shipments. The coalition force has been joined by Albania, Australia, Bahrain, Israel, Kuwait, Qatar, Saudi Arabia, the United Arab Emirates and the United Kingdom.

France’s defense minister announced on November 24 that, instead of Europe joining the U.S. coalition, France would lead its own “European maritime surveillance mission,” which has been joined by Belgium, Denmark, Italy, the Netherlands, Norway, Spain and Sweden.

Iran conducted joint naval drills in the Indian Ocean with China and Russia starting December 27. Iranian leaders also called for further military cooperation with China, especially in the production of destroyers and submarines. Meanwhile, Japan and India are running their own independent naval operations.

In October, the Trumpet wrote, “Iran is taking aim at the most volatile region on Earth: the oil-producing and shipping sector of the Persian Gulf. This change of policy means that the Middle East is now a lot more dangerous.” Daniel 11:40 says this is leading to a spectacular military clash between Europe and Iran. The Persian Gulf is becoming crowded with foreign militaries. But even if war does not ignite now, tension will grow, and warfare will soon become reality.

Wildfires are ravaging Australia in an unprecedented bushfire season that has incinerated 41,000 square miles, killed roughly 1 billion animals, destroyed more than 2,200 homes, and killed at least 27 people. Navy ships and military aircraft have been delivering supplies such as food, water and fuel to areas cut off by the fires. Prime Minister Scott Morrison has warned that this national emergency may continue for months. Smoke from the conflagration has even reached New Zealand, 1,300 miles away.

Many are blaming the fires on climate change, but man-made carbon dioxide emissions are not the primary cause of Australia’s bushfire crisis. Arsonists have been found to be most directly responsible. But the ultimate cause for their sheer destructiveness is found in Leviticus 26:3-4: “If ye walk in my statutes, and keep my commandments, and do them; Then I will give you rain in due season, and the land shall yield her increase, and the trees of the field shall yield their fruit.”

Instead of blaming the climate change or the government, Australians need to look at themselves. As Trumpet editor in chief Gerald Flurry wrote in “The Deadly Climate Change Deception,” “God will continue to ratchet up the weather disasters until we finally begin to listen to Him!”

On January 6, Malaysia commissioned its first of four Chinese-built Keris-class warships to be built in the coming months, a sign of China’s increasing influence over a nation that controls one of the world’s most important maritime choke points.

The Royal Malaysian Navy wrote that the acquisition marks a milestone for military ties between the two as it is “the first capital defense asset acquired from China” by Malaysia. The contract follows an equally momentous decision by Malaysia in April to let China resume construction on the East Coast Rail Link, which will connect to Port Klang, one of the primary ports controlling passage through the Strait of Malacca, the world’s second-most heavily trafficked maritime choke point for crude oil shipments, surpassed only by the Strait of Hormuz.

The Strait of Malacca is one of dozens of the world’s most important passages that were controlled by Great Britain, then the United States, but that are now falling under the influence of nations like China. As China, Europe and other powers take control of more passages, the British and the Americans will find themselves “besieged,” as prophesied in Deuteronomy 28:52. See “China Is Steering the World Toward War.”

Global debt has ballooned to a record high of more than $250 trillion, according to a Nov, 14, 2019, report from the Institute of International Finance. Global debt has grown by $78 trillion since the 2008 financial crisis, while the global economy has only grown by $28 trillion.

More than 60 percent of the debt is owed by the United States and China, the report continues. Around the world, “there are increasing questions about the marginal utility of further borrowing—and a lot of concern that a continued ramp-up in debt could spark a fresh crisis.”

The world is reaching the limits of the growth that can be squeezed out of deficit spending. Further spending risks are causing a crisis. Economists now have a choice to make: Stop spending and risk destabilizing the global economy, or keep spending until national economies crash under their debt loads.

In Deuteronomy 28, God warns that debt problems are one of the curses that come from disobedience. The world’s current economic woes are not the cause of its problems. Instead, they are one of many symptoms that point to the greater problem: rebellion against God’s law.

China is building an alarming number of warships

The Chinese Navy is bringing an eye-popping number of new warships online, including the commissioning on Dec. 17, 2019, of its first indigenously built aircraft carrier. The Type-002 carrier, named the Shandong, can carry 36 J-16 fighter jets, a dozen more than China’s first aircraft carrier, the Soviet-built Kuznetsov-class Liaoning. The Chinese Navy now also has 30 destroyers, 48 frigates, 42 corvettes and over a hundred smaller hulls, along with 62 ballistic missile and attack submarines, some of which are nuclear-powered. Many more vessels are under construction.