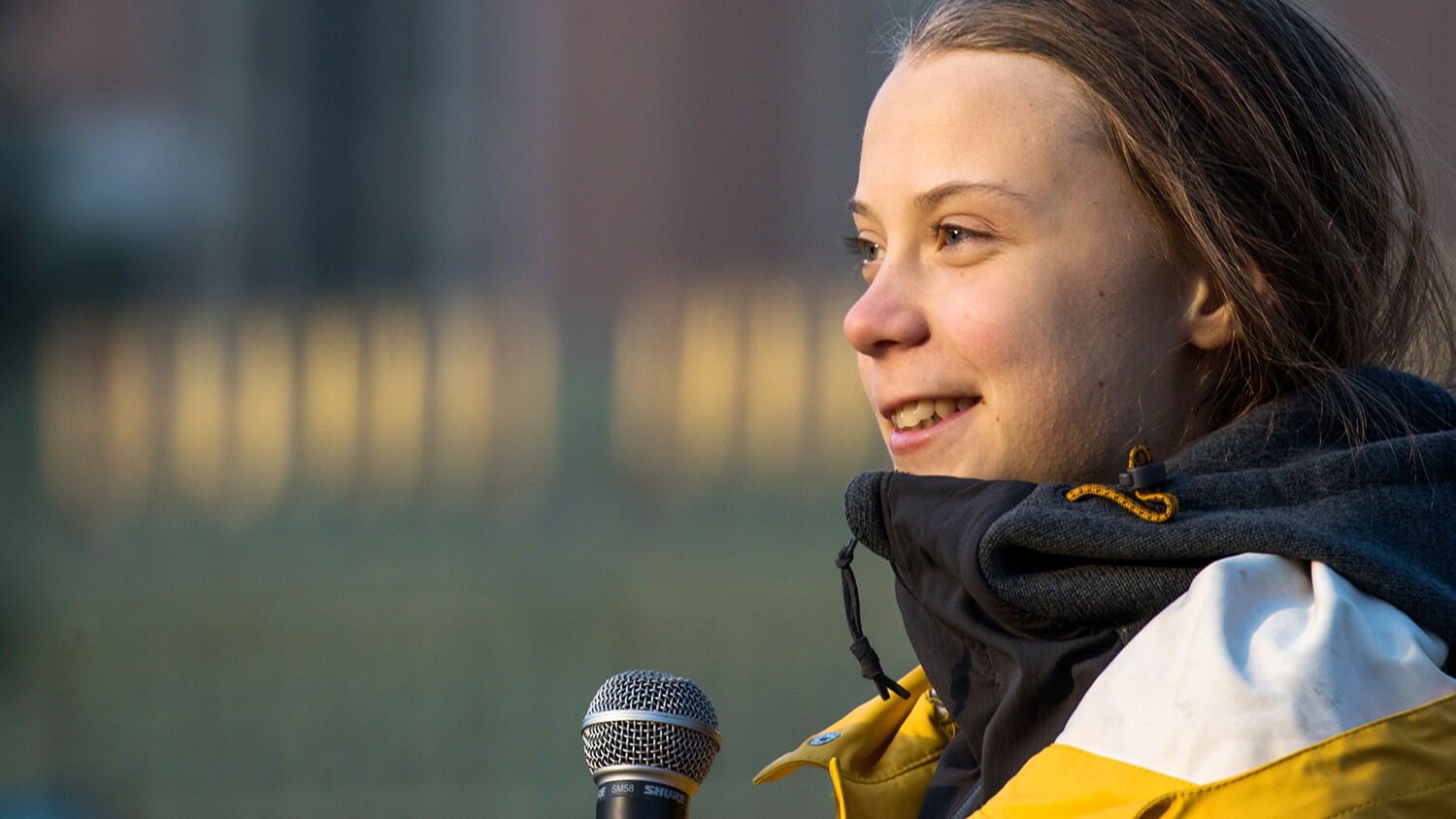 Greta Thunberg, the young climate change activist from Sweden, was named Time magazine’s 2019 Person of the Year—a potential symbol of one of the biggest trends of 2019. At 16 years old, she has become the pioneer and symbol of a youth movement that is spreading across the globe.

Greta Thunberg is an ordinary teenage girl who, in summoning the courage to speak truth to power, became the icon of a generation #TIMEPOY https://t.co/6X9Bit3V6F

Greta’s road to activism is quite literally a depressing one.

According to Time, Greta’s climate obsession began when she was 11 years old. She fell into a “deep depression” with periods of “endless sadness” after a class about the effects of climate change. She couldn’t reconcile how the planet could be in such danger and yet no one was prioritizing the issue. During this period, she barely spoke or ate. She came close to hospitalization due to the malnutrition that has stunted her growth.

This excessive reaction is a hallmark characteristic of Greta’s Asperger syndrome. Asperger’s is often characterized by an inability to understand social cues and an intense or obsessive interest in one specific subject. Individuals with Asperger’s see the world very literally and have trouble understanding humor, sarcasm and irony. Time says this is her greatest asset. “She dislikes crowds; ignores small talk; and speaks in direct, uncomplicated sentences. She cannot be flattered or distracted. She is not impressed by other people’s celebrity, nor does she seem to have interest in her own growing fame. But these very qualities have helped make her a global sensation.”

To help her overcome this depression, Greta’s parents encouraged her to take action. In August 2018, Greta began skipping school to strike alone outside the Swedish Parliament. And since her lone protest went viral, she has become a media sensation and an almost global hero.

But what the media as a whole refuses to report is how this young girl has been exploited. Contrary to early reporting, it is no accident that Greta’s protest made headlines. The founder of the social media platform “We Have No Time,” which posted Greta’s first protest online, didn’t happen to stumble across Greta as first believed. In fact, Ingmar Rentzhog had met Greta’s mother three to four months beforehand and was notified of the lone protest a week before it happened by another climate activist. Rentzhog’s Facebook post of Greta’s lone protest quickly went viral.

Ever since, Greta’s vulnerabilities continue to be exploited. In her article “The Weaponization of Western Children,” Melanie Phillips wrote:

What was so distressing was to see this very vulnerable child’s anguish and rage at the world’s failure to put modernity itself into reverse, in order to combat a supposedly unstoppable apocalypse for which no plausible evidence whatever exists but over which nightmarish vision she and countless others are being terrified out of their wits by worthless or outright fraudulent studies which they have been led to believe constitute “settled” and unchallengeable science … and through which bogus emergency they are being used and manipulated to create global hysteria.

The coverage Greta has received is akin to worship. The Time article naming Greta “person of the year” stated:

[Greta] emerged as a standard bearer in a generational battle, an avatar of youth activists across the globe fighting for everything from gun control to democratic representation. Her global climate strike is the largest and most international of all the youth movements, but it’s hardly the only one: Teenagers in the U.S. are organizing against gun violence and flocking to progressive candidates; students in Hong Kong are battling for democratic representation; and young people from South America to Europe are agitating for remaking the global economy. Thunberg is not aligned with these disparate protests, but her insistent presence has come to represent the fury of youth worldwide.

Time credits her with not only the surge in climate protests, but also many other youth movements around the globe. And in it, she has earned the admiration of the rich and powerful. This teenager has been worshiped by and become a sort of moral guide for scholars and world leaders alike. Time continued:

In the 16 months since [her first lone protest], she has addressed heads of state at the UN [United Nations], met with the pope, sparred with the president of the United States, and inspired 4 million people to join the global climate strike on Sept. 20, 2019, in what was the largest climate demonstration in human history. Her image has been celebrated in murals and Halloween costumes, and her name has been attached to everything from bike shares to beetles. Margaret Atwood compared her to Joan of Arc.

Actor Leonardo DiCaprio said that Greta, and the young people she has inspired, “set an example of true leadership that we so desperately need right now.” Prince Harry said that every country, community, school, friendship group and family “needs their own Greta—someone who can lead the way ….”

This 10-year-old is leading the fight against climate change in Colombia - on the streets and in the Senate.

The praise by these celebrities and leaders is the embodiment of an end-time prophecy in Isaiah 3: “As for my people, children are their oppressors, and women rule over them. O my people, they which lead thee cause thee to err, and destroy the way of thy paths” (verse 12).

This is an exact description of our society today. Children are rising up to oppress us and women are increasingly leading in our homes, in our nations and in every facet of society. And the vast majority of people are not only passively tolerant toward this phenomenon, but are actively promoting its rise.

In the language of the Time’s article: “She is a reminder that the people in charge now will not be in charge forever, and that the young people who are inheriting dysfunctional governments, broken economies and an increasingly unliveable planet know just how much the adults have failed them.” Greta has “become the voice of millions, a symbol of a rising global rebellion.”

This is the exact fulfillment of Isaiah 3! Children are rising in rebellion and oppressing the populace.

And leaders are acting as if these children have become their moral guides. French President Emmanuel Macron said, “When you are a leader and every week you have young people demonstrating with such a message, you cannot remain neutral. They helped me change.” Hillary Clinton said that Greta’s UN speech should be required viewing for every lawmaker. Former president of Ireland, Mary Robinson, said that when she would talk about the effects of climate change it would fall on deaf ears, but “having children say, ‘We have no future,’ is far more effective. When children say something like that, adults feel very bad.” Guardian columnist Jonathan Freedland wrote: “Children skipping classes to take the moral lead is an indictment of adult complacency.”

We have reached the “apotheosis,” or climax, of “St. Greta,” as the Spectator sarcastically put it.

What we are seeing is a complete reversal of the roles God established in family and society. It is being turned upside-down. Children are now ruling over adults who simply bow down in submission.

In his book The Missing Dimension in Sex, Herbert W. Armstrong wrote, “Few people stop to realize to what extent the teenagers have taken over. They pretty well dominate the world picture. Isaiah foretold this day.”

But as Mr. Armstrong brought out in a World Tomorrow radio broadcast, this phenomenon is primarily not the children’s fault: “That 90 percent of the youth problem is irresponsibility of parents and the main trouble, my friends, is that we do not teach respect for authority. … God Almighty is the Supreme Ruler of the universe, and we have the kind of teaching that doesn’t want to acknowledge any authority, doesn’t want to obey; submit to any obedience. We don’t like to submit to law.” Further in the broadcast, Mr. Armstrong said that there is “nothing more important in life to learn than respect for authority and obedience.”

God blames parents for what these children are doing. The parents have failed in their duty to discipline their children and teach them respect for authority.

This upside-down society is not the way God intended it to function. The government God established is ultimately about learning to submit to God as our supreme authority. For more information about true government, read Trumpet editor in chief Gerald Flurry’s booklet God’s Family Government.