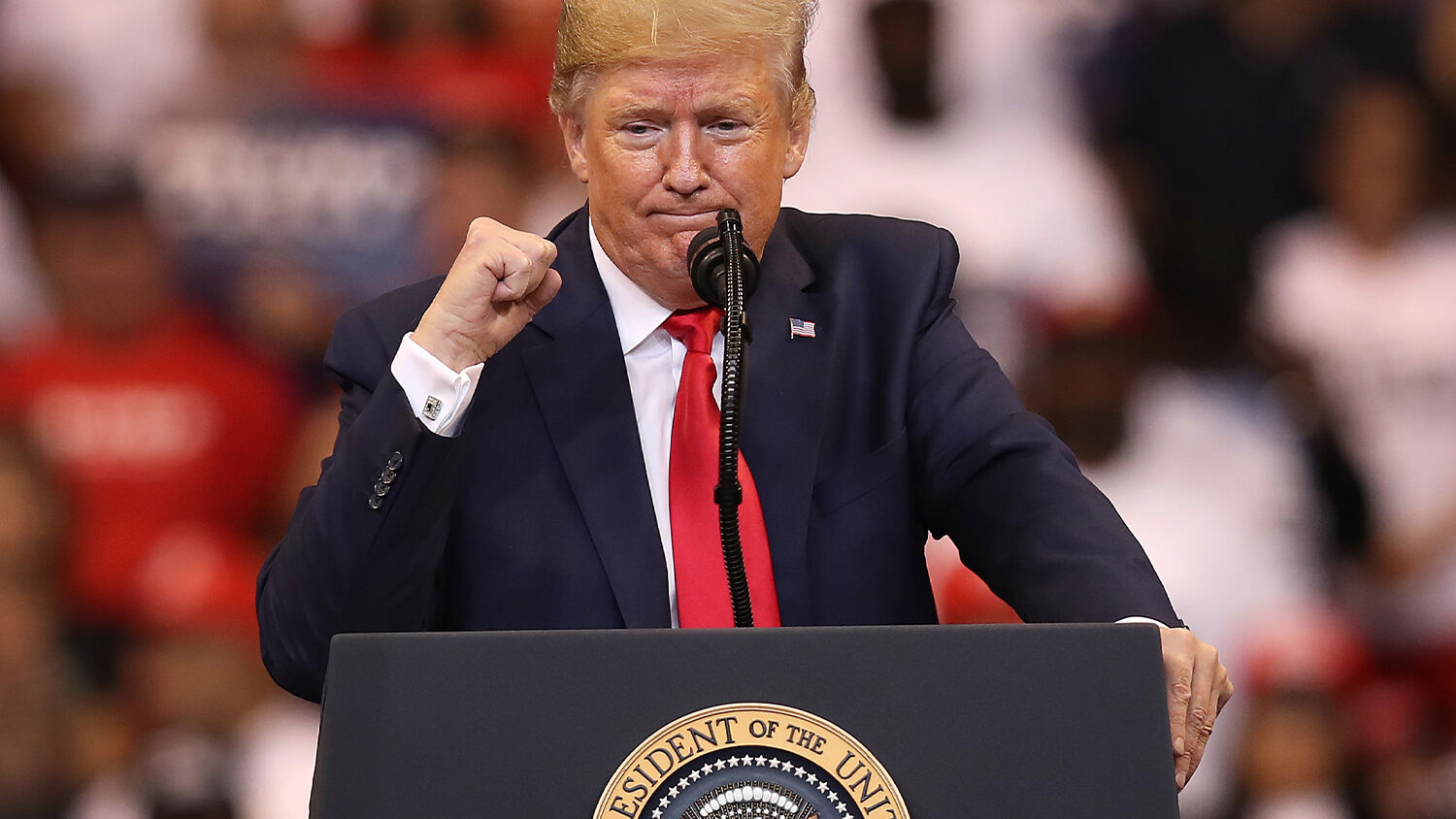 The United States Senate confirmed President Donald Trump’s appointment of Judge Robert Luck to the Eleventh Circuit Court of Appeals on November 19, which gives Republican appointees an 11-to-9 majority over Democrat appointees. Before President Trump took office in 2017, the court had a Democratic majority. His appointments have also “flipped” the Second Circuit and Third Circuit Courts of Appeals.

In recent decades, the Democratic Party has increasingly resorted to using judicial activism to advance its agenda. Mostly Democrat-appointed federal judges have ruled against the Trump administration 63 times, hindering him on immigration, gun control and the environment. Yet, these rulings were based on a judicial philosophy that states that the Constitution evolves and changes over time, and can therefore mean whatever judges decide it means in a particular case. Most Democrat-appointed federal judges reject the Constitution as the unchanging Supreme law of the land.

President Trump’s appointments of more than 150 federal judges, including 46 appellate judges and two Supreme Court justices, is a counterattack against anti-Constitutional radical leftism in the Democratic Party that has increasingly resorted to judicial activism to bypass the law and advance its agenda.

Germany is the world’s fourth-largest exporter of armaments, and its arms industry is on track to possibly set another record in 2019. The German Press Agency reported that in the first 10 months of 2019, the German government approved arms exports valued at $8.2 billion to Algeria, Australia, Egypt, Hungary, Norway, Qatar, South Korea, Turkey, the United Kingdom and the United States. It is likely that German exports for 2019 broke its previous $8.9 billion record from 2015.

The Economic Ministry states on its website that arms exports are not resources for economic policies but for building strategic partnerships and alliances, helping maintain Germany’s arms industry and thus its national security.

Germany is not yet fully asserting itself against other nations, but it is using one of its strengths, exports, to ensure that when that time comes, it and its allies will be exceptionally well armed.

On a Nov. 23-25 visit to Japan to memorialize the bombings of Hiroshima and Nagasaki, Pope Francis declared not only the use but the mere possession of nuclear weapons “immoral” and “to be condemned.” He is the first pope to do so. And on his flight home, he announced that his declaration against nuclear weapons will be added to the catechism, Vatican News reported.

Nuclear weapons are obviously some of mankind’s most hideous inventions, but the pope is not just making a philosophical point. He is applying pressure on the United States specifically, since U.S. bombs destroyed the two cities and the U.S. is one of the two foremost nuclear-armed nations on the planet.

On his flight, Pope Francis also stated that “international organizations don’t succeed” at containing conflicts because certain nations have veto power. The U.S. is one of the most prominent users of that power.

Pope Francis has an agenda. In 2015, he facilitated a revival of U.S.-Cuba relations. In 2016, an American election year, he staged a photo-op at the U.S.-Mexico border. Asked about presidential candidate Donald Trump’s plan for a border wall, he replied that “a person who thinks only about building walls, wherever they may be, and not building bridges, is not Christian.” Watch for the pope to continue using his unique power to criticize, pressure and weaken the United States, using his office to help drive an anti-American European policy.

German and Israeli pilots fly together

Airmen from Israel, the United States, Greece, Germany and Italy participated in the Blue Flag 2019 fighter exercise in Israel November 3-14. The exercise included 1,000 participants and 70 aircraft from the five countries.

Germany and Italy combined sent 12 aircraft, the same number contributed by the United States. Germany’s Spangdahlem Air Base contributed around 250 airmen, and Israel held its “most advanced air drill” with Germany. An Israeli pilot flew in a Eurofighter, and a German pilot flew an Israeli Air Force F-16. “It was kind of emotional,” German Air Force Lt. Col. Manuel Last said; “it was a great experience.”

When asked what the name of the German air force, “Luftwaffe,” means to him, one Israeli pilot said, “Every cooperation with Germany and Israel is very emotional. … We cannot erase the past. But we are looking ahead. And the relationship between our air forces is based on trust.”

Germany and Italy once joined forces to kill all Jews. Now Israel is trusting these two nations for protection, even as anti-Semitism is again resurging in Europe, rather than trusting in God. The Bible prophesies that God will use Germany to punish Israel in a historic and deadly betrayal.

On Nov. 18, 2019, the New York Times and Intercept reported on leaked files from Iran’s Ministry of Intelligence and Security. Hundreds of pages of documents reveal a secret 2014 meeting between Iran’s Quds Force and the Muslim Brotherhood at a hotel in Turkey.

Though the Shiite Iranians and the Sunni Muslim Brotherhood have a deep religious rivalry, Muslim Brotherhood leaders said that the two sides should “focus on joint grounds for cooperation,” join forces in Yemen against Saudi Arabia, their “common enemy,” and “defuse” the Sunni-Shiite conflict in Iraq.

In its home country of Egypt, however, the Muslim Brotherhood fears that accepting Iran’s support against the government will discredit the movement. But this could change.

Iran and the Muslim Brotherhood share the goals of destroying Israel and strengthening political Islam. “Iran sees the Brotherhood as a bridge for improving relations with the Sunni Muslim world,” including several “Sunni Islamist groups hostile towards Iran,” the Carnegie Middle East Center wrote.

With the primarily Sunni nations of Algeria, Egypt and Libya in political upheaval, Iran could partner with the Brotherhood to boost its radical Islamist influence across North Africa. Prophecies in Daniel 11:40-43 show it will succeed. In the meantime, as the leaked Iran-Muslim Brotherhood documents reveal, the radicals are waiting for “the right political context to reemerge as a force in Egypt.

United States Secretary of State Mike Pompeo announced on Nov. 18, 2019, that the U.S. no longer regards Israeli settlements in the West Bank as illegal. “After carefully studying all sides of the legal debate, this administration agrees with President Reagan,” he said . “The establishment of Israeli civilian settlements in the West Bank is not per se inconsistent with international law.”

The announcement rejects European diplomatic dogma and even American policy under previous presidents, including the Obama administration’s policy that these settlements were a “flagrant violation under international law.”

“Monday will long be remembered as a turning point in Middle East history,” Israeli journalist Caroline Glick wrote, calling the announcement “the most significant shift in U.S. Middle East policy in the past generation” (Nov. 22, 2019).

A Jerusalem Post opinion article stated, “For both Jews and evangelical Christians, Trump has completed a fulfillment of prophecy” (Nov. 19, 2019).

In “Saving America From the Radical Left—Temporarily,” Trumpet editor in chief Gerald Flurry revealed from Bible prophecy that God is using the Trump administration to bring a resurgence to America. “What we are seeing is actually a modern-day fulfillment of what happened in ancient Israel under Jeroboam ii. … Yet like anciently, this is only a temporary resurgence” (Trumpet, May-June 2018).

This resurgence benefits Israel, but when it ends, Israelis will turn to Germany for help (Hosea 5:13), a mistake that will prove fatal.

Russian President Vladimir Putin and Chinese President Xi Jinping supervised the opening on Dec. 2, 2019, of a 1,865-mile-long “Power of Siberia” pipeline, which carries gas from the Kovytka and Chayandinskoye fields in eastern Siberia to Heilongjiang, Jilin and Liaoning, China. Once it reaches full capacity, it will pump 1.3 trillion cubic feet of Russian gas into China each year, almost 10 percent of China’s entire gas supply. The 30-year, $400 billion contract is Russia’s most important since the fall of the Soviet Union.

“This is a genuinely historical event, not only for the global energy market but above all for us, for Russia and China,” said Putin, who oversaw the launch via video link from Sochi, Russia. Overseeing the launch from Beijing, Xi called the project a “landmark” and a “paradigm of the deep convergence of both countries’ interests.”

Editor in chief Gerald Flurry wrote in the May-June 2014 Trumpet issue, “When these Asian nations—extremely powerful nuclear-armed countries—begin to show solidarity with each other regarding moves like that, what does that portend for the world? I tell you it is woe to the world.” To understand the Bible prophecies behind Mr. Flurry’s analysis of Asian geopolitics, order your free copy of Russia and China in Prophecy.

Hong Kong has been filled with turmoil since mid-March 2019, with street protesters clashing in the streets and demanding freedom from the Chinese Communist Party, which governs the mainland. Chinese Foreign Minister Wang Yi asserted that despite the vote, Hong Kong will remain part of China “no matter what happens.”

So far, the Communist Party has not used its overwhelming power to crush the protests. But it values the peninsula and its islands as crucial for controlling trade routes through the South China Sea, so expect China to get control. Trumpet editor in chief Gerald Flurry wrote in July 2016: “[T]he American military is retreating, and other great powers are coming in to fill the vacuum. … Whoever controls these vital sea gates controls one third of the world’s maritime commerce.”

To learn more about China and its role in end-time prophecy, read Mr. Flurry’s article “China Is Steering the World Toward War.”

Belarus and Russia are preparing to establish a single government over both nations in preparation for creating a “Union State of Russia and Belarus” by 2021. Belarussian ambassador to Russia Vladimir Syamashka said in an interview with Tut.by on Nov. 29, 2019, that Russian President Vladimir Putin and Belarussian President Alexander Lukashenko are working toward “the creation of a single parliament and government with executive authority.”

According to Russia’s constitution, Putin’s presidential term will end in 2024. When his first two terms ended in 2008, he retained power by arranging for a surrogate to take the presidency while he became prime minister. This time, he could become head of the Union State of Russia and Belarus and make the office more powerful than whoever would succeed him as Russian president.

Putin famously called the collapse of the Soviet Union the “greatest geopolitical catastrophe of the [20th] century,” and has worked to rebuild Russian power over former Soviet nations like Georgia, parts of Ukraine and Belarus.

Trumpet editor in chief Gerald Flurry writes in his booklet The Prophesied ‘Prince of Russia’ that Putin’s position is prophesied in the Bible. He states that an Asian force of 200 million soldiers (Revelation 9:16) will almost certainly be led by the “prince of Rosh, Meshech, and Tubal” (Ezekiel 38:2; Young’s Literal Translation), a reference to modern Russia, including Moscow and Tobolsk.