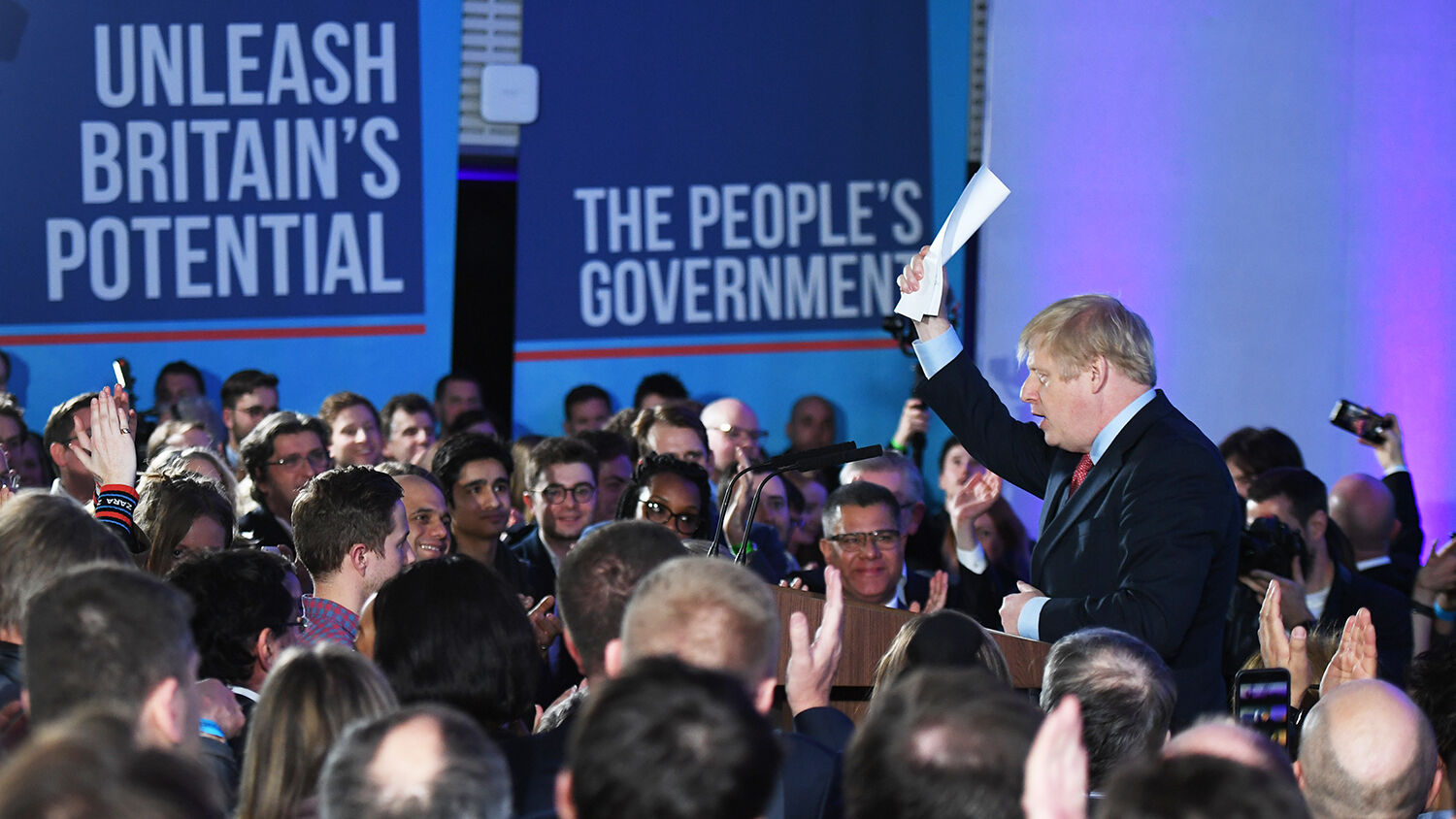 British Prime Minister and leader of the Conservative Party Boris Johnson speaks to supporters and press as the Conservatives celebrate a sweeping election victory on December 13 in London, England.
Chris J Ratcliffe/Getty Images

Britain’s election is over and Conservative leader Boris Johnson is on course to secure a 78-seat majority in Parliament. In his victory speech last night, Mr. Johnson said yesterday’s overwhelming victory was a “stonking mandate” to get Brexit done.

With just one result yet to be announced, the Conservatives have won 364 seats in Parliament—the greatest Conservative majority since 1987 under Margaret Thatcher.

Meanwhile, the opposition Labour Party experienced its worst result since 1935, picking up only 203 seats.

The results show that this election was all about Brexit. In June 2016, many traditionally Labour constituencies voted to leave the European Union. Since then, the Labour Party has done all it could to overturn the vote and keep Britain part of the EU. The Labour Party campaigned to hold a second referendum—but one that offered only options of no Brexit or a deal that is not really Brexit. In addition to its anti-democratic stance on Brexit, Labour was hurt by its embrace of numerous far-left Marxist politics, as well as its tolerance of anti-Semitism.

The result is the collapse of the so-called “red wall.” For decades, huge swathes of Northern England typically voted Labour. Yesterday, Conservatives made dramatic inroads into this territory, Labour’s heartland. In some instances, constituencies that have elected Labour members of Parliament since before World War ii voted Conservative.

No Conservative government has had this kind of majority since Mrs. Thatcher. This gives Mr. Johnson tremendous power. Previous Conservative leaders, such as Theresa May, have had only a slim majority, which meant that only a handful of dissenters could block laws and hold the government to ransom. With a 78-seat majority, Boris Johnson will not have to worry about such a scenario. Although Britain has had a Conservative-led government for nearly 10 years, this next government will be very different.

Mr. Johnson’s entire campaign revolved around getting Brexit done and Britain now seems set to leave the European Union by the end of January.

This is a remarkable shift for Britain, and it is right in line with a major forecast by the Bible for Britain and America.

For years we have forecast that Britain would leave the European Union.

In 1945, broadcasting as World War ii came to a close, the late Herbert W. Armstrong predicted that Germany would rise again within “a European union.” As this union took shape, and some talked of Britain joining, he wrote, “Germany is the economic and military heart of Europe. Probably Germany will lead and dominate the coming United States of Europe. But Britain will be no part of it!”

When Britain joined the European Union in 1973, Mr. Armstrong forecast that we would regret it, writing, “Britain is going to look back on Monday, Jan. 1, 1973, in all probability, as a most tragically historic date—a date fraught with ominous potentialities! For that date marked the United Kingdom’s entry into the European Community.”

Over a decade after Britain joined the Common Market, Mr. Armstrong continued to forecast that Britain would not be part of this European superpower. “[T]he soon-coming resurrected ‘Holy Roman Empire’—a sort of soon-coming ‘United States of Europe’—a union of 10 nations [will] rise up out of or following the Common Market of today (Revelation 17),” he wrote in his 1985 book Mystery of the Ages, published less than a year before he died. “Britain will not be in that empire soon to come.” Since Mr. Armstrong’s death, the Trumpet has continued to warn that the European Union would form a superstate, and that Britain would not be part of it. That unwavering forecast is based on Bible prophecy. And that prophecy is being fulfilled right now.

In about a month’s time, if Mr. Johnson keeps his word, Britain will finally be out of the EU—despite the best efforts of an overwhelmingly pro-EU elite.

But there’s another critical prophecy related to these events.

Since 2016, the Trumpet has explained the prophecy in Amos 7 that describes an end-time King Jeroboam. The Prophet Amos lived in the eighth century b.c., during the reign of Jeroboam ii over the kingdom of Israel. While Amos delivered a message to Jeroboam ii anciently, his message was prophetic and applies to the end-time descendants of Israel: Britain and America. Amos was forecasting a future leader who would have accomplishments similar to those of Jeroboam ii.

The history of Jeroboam ii’s reign is recorded in 2 Kings 14. “For the Lord saw the affliction of Israel, that it was very bitter: for there was not any shut up, nor any left, nor any helper for Israel. And the Lord said not that he would blot out the name of Israel from under heaven: but he saved them by the hand of Jeroboam the son of Joash” (verses 26-27). The kingdom of Israel was in deep trouble at the time, and God rescued it through its king. The nation experienced a resurgence—expanding in power and territorial control.

“Israel was nearing collapse!” wrote Trumpet editor in chief Gerald Flurry in August. But God intervened to save the nation. “God was merciful, and used Jeroboam to oversee one last age of prosperity” (“Can President Trump Get Control of His Own Divided Government?”).

The nations of America and Britain are the end-time descendants of Manasseh and Ephraim, the two leading tribes in Israel. The prophecy in Amos 7 shows that these nations would come close to collapse, but experience a resurgence much like the one that occurred under Jeroboam ii in the eighth century b.c.

Britain voted for Brexit in June 2016, and America voted for Donald Trump in November 2016. Both votes were a massive defeat for the traditional elites. Those elites have pulled out all the stops to override the vote of the people and take back control of the government. In the United Kingdom there’s been a concerted push to overturn the Brexit referendum. If it succeeded, Britain would be shackled to a hostile, rising European superpower. In the U.S., intelligence services spied on Mr. Trump, and the radical left is trying to push him from power by impeaching him.

This is about more than Mr. Trump or Brexit. It is about who controls our nations. Are we really democracies—or are our leaders and policies chosen by an undemocratic elite? That elite was “getting control of the government,” wrote Mr. Flurry. “Justice in the land was destroyed. Rule of law was twisted and perverted. People were losing faith in the government. If this trend had continued, it would have meant the end of our republic!

“But God was not ready for that. He was going to save America—along with Britain and the Jewish nation” (ibid).

God used Donald Trump to save America from the radical left and lead an incredible resurgence of power and prosperity. Is Britain experiencing the same trend? With Mr. Johnson’s strong majority, supported by President Trump, it certainly looks like Britain might be experiencing a similar resurgence!

Congratulations to Boris Johnson on his great WIN! Britain and the United States will now be free to strike a massive new Trade Deal after BREXIT. This deal has the potential to be far bigger and more lucrative than any deal that could be made with the E.U. Celebrate Boris!

As far as Bible prophecy is concerned, yesterday’s vote was significant for those two reasons: It increases the chances of Britain leaving the EU, and it is very likely part of a national resurgence underway in the UK.

It’s easy to get excited about the prospect of a resurgent Britain and America, growing in wealth, power and prestige. But before we celebrate too much, it is important to understand the full prophetic picture. Anciently, the resurgence under Jeroboam ii was temporary. The resurgence in America and Britain will also be short-lived. As Mr. Flurry wrote, “[T]he national resurgence brought about by this end-time Jeroboam is only temporary. Prophecy is clear that America’s ultimate fate [and Britain’s too] is just as devastating, and even far worse, than the kingdom of Israel’s was anciently!”

America and Britain are riddled with lawlessness and sin. This embrace of sin will have devastating consequences. Is Prime Minister Johnson or President Trump going to fix—or even confront—our nations’ problems of sexual immorality, drug use, corruption, rebellion against Judeo-Christian values, and the destruction of the traditional family? President Trump has not followed President Abraham Lincoln’s example in addressing the nation’s sins and calling on God for forgiveness. Mr. Johnson has been a strong supporter of the lesbian-gay-bisexual-transgender movement. He is not married to his live-in girlfriend—a fact that is not remarkable to anyone in the UK anymore.

Unless these nations repent of their addiction to sin, we will not solve the mammoth and endless crises brought on by sin.

We certainly will not be able to solve the massive division in both Britain and America. Tim Stanley at the Telegraph wrote that “the left poured a bucket of bile over the Tories in this election. They portrayed them as heartless monsters from the black lagoon, hell-bent on selling off the nhs to Donald Trump.” The left lost this election, but the hatred and division remains, and it will only intensify. These election results show that other dangers also lay ahead. For example, the Scottish National Party won 48 out of Scotland’s 59 seats. In Northern Ireland, parties that want to separate from the UK and unify with the Republic of Ireland achieved their best result ever. This means both Scotland and Northern Ireland will now probably push harder to break away from the UK.

It is natural to rejoice when you see your country resurgent. But we have to be careful not to place our hope in these human politicians. Instead, there is an even more powerful source for hope and optimism.

The real good news in Britain is that Bible prophecy is being fulfilled before your eyes. Britain is coming out of the European Union, just as we said it would for decades. Fulfilled prophecy is proof of an Almighty God with a plan for mankind. This is where you can really invest your trust.

In his August cover article for the Trumpet magazine, Mr. Flurry wrote: “How wonderful that God reveals that spectacular future in advance, to give us all hope as we face such horrifying times. How marvelous that He explains the events that lead to that future, including what it means when a Jeroboam-type leader comes along and shocks everyone—especially the opposition—by turning things around in America. How magnificent to understand these events in the context of the larger prophetic panorama!”

Bible prophecy gives us a hope of much more than a temporary resurgence. It forecasts some dark times once that resurgence is over. But the major picture is a spectacular vision of hope that dwarfs any suffering.

Use the fulfilled prophecy as motivation to study and dig into that vision. “That should make your imagination soar! See that vision! Be moved and stirred by it—and turn with your whole heart to the God who will transform that vision into reality!” wrote Mr. Flurry.

To understand God’s plan for Britain, America and the whole world, read our free book The United States and Britain in Prophecy, by Herbert W. Armstrong. This book explains why God is working with our people—and how His purpose contains great hope for everyone that has ever lived.