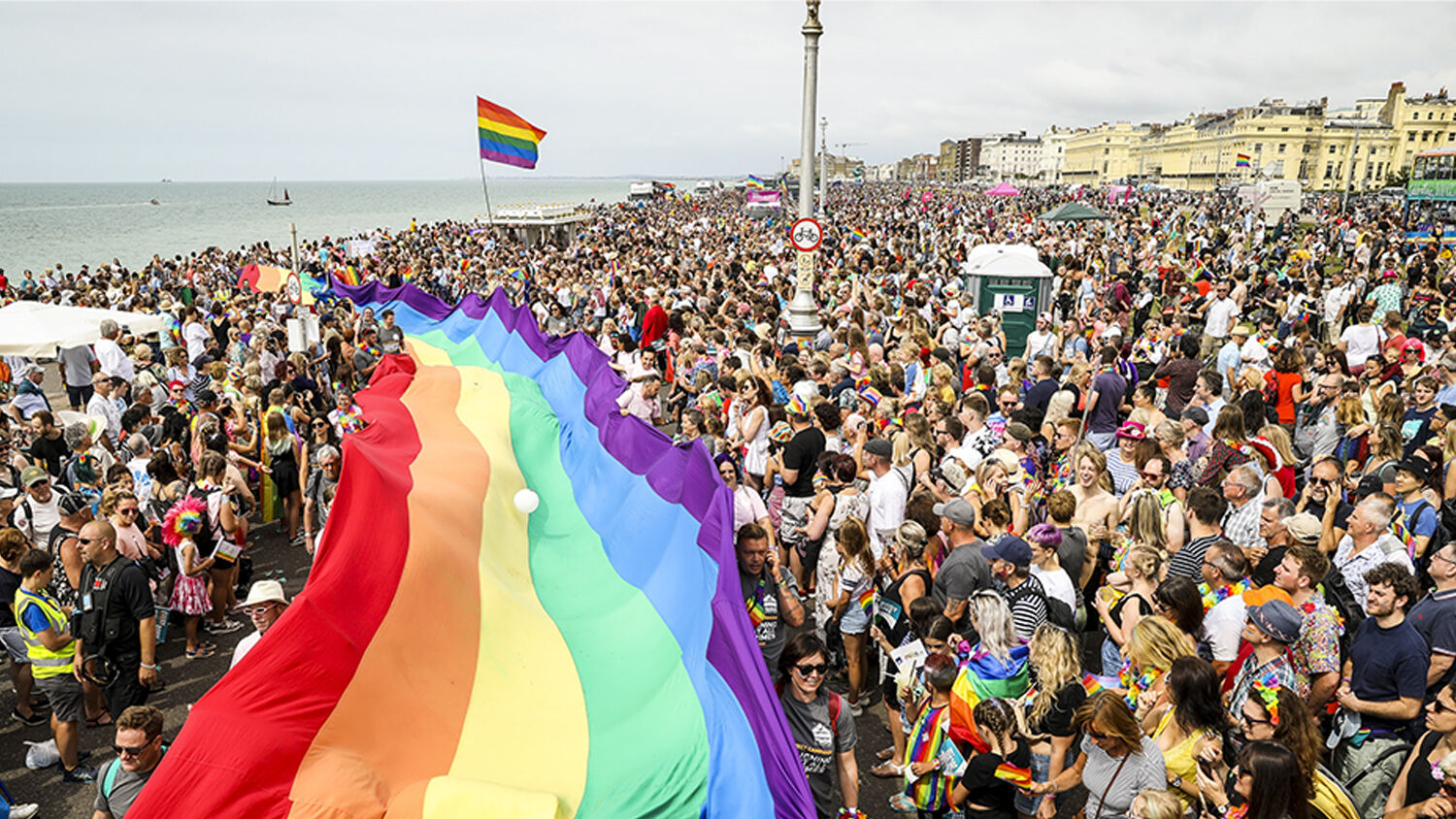 A giant rainbow Pride flag is carried along the sea front during Brighton Pride 2019 on August 03, 2019 in Brighton, England.
Getty Images

Desmond Napoles is a drag performer, fashion model and actor. He performs at lesbian-gay-bisexual-transgender-queer parades, on stages and on runways across the United States. He calls himself “Desmond Is Amazing.” He is 12.

A video of this child was posted on YouTube about a year ago. It has been “liked” by 2,700 viewers, and it has been “disliked” by 48,000 viewers. At a ratio of 18:1, people do not like seeing a child turn into a sexual deviant.

Yet do you know who posted this particular video? Good Morning America, the most popular morning television show in the largest television market on Earth. And they presented it not only as if it were normal, but as if it were heroic. As Desmond strutted in, the audience gave raucous applause, grinning ear to ear. He was embraced by fawning, almost awestruck hosts. At the end of the segment, Desmond was surrounded onstage by adult drag queens.

The average American’s disgust for such a horrible thing happening to a child was not reflected on the show. Good Morning America made the story of the then 11-year-old prepubescent drag queen dressing like a prostitute seem laudable, and certainly normal and acceptable.

This reveals more than just the enormous divide between the media’s liberal elites and the average human being. Something much more sinister is at work.

How many of this show’s 4 million-plus viewers reacted with aversion to what they were seeing, yet saw their favorite hosts and others in the studio gushing with adoration—and then questioned themselves? Maybe Desmond Is Amazing is normal? Maybe this isn’t as bad as I think? Maybe I’m the one who’s wrong for being disgusted?

That segment was mainstreaming wickedness. Its obvious intent was to present as normal and good something the vast majority of people still believe is deviant and wrong. It turned evil into good, and good into evil.

The radical left does this all the time.

We are experiencing a global campaign to make gender perversion normal. Entertainment, news and advertising media are full of homosexual, bisexual, transgender and other sexual deviance. One gets the impression that millions of average people are experimenting with their sexuality or gender, and millions of others have no issue with transgenderism and gender fluidity.

In fact, only 0.6 percent of American adults identify as transgender. The figures are roughly the same in other nations.

In mainstreaming evil, one of the left’s greatest success stories is homosexuality. In our society, the debate over homosexuality is over. It is considered entirely normal by both the left and right. Judging by homosexuals’ influence on Western culture, you could assume that many average people are homosexual. Over 10 percent of tv characters are lgbtq—but Gay and Lesbian Alliance Against Defamation wants that figure bumped up to 20 percent by 2025.

In fact, even with the negative stigma gone, only 4.5 percent of American adults identify as homosexual.

This isn’t bigotry or hate. This is fact. Transgender and gender-confused people, and even homosexuals, are part of a tiny, in some cases, minuscule, minority. Yet these groups have a powerful presence and incredible influence in society. How did it get to be this way?

The radical left has been incredibly successful at normalizing the most extreme of beliefs!

This mainstreaming of minority views and opinions occurs daily on all sorts of issues, including climate change, gender inequality and feminism. You even see it in political issues, such as the presidency of Donald Trump, or Brexit. Media personalities convey the impression that the overwhelming majority of the population believe Donald Trump should be impeached, or that Britain should remain in the European Union. They create the impression that Trump supporters and Brexiteers are part of a small minority of radical, far-right bigots. In fact, 63 million people voted for Donald Trump, and a clear majority of the British people voted to leave the EU—and still want to leave the EU today.

Only one mind can come up with a strategy this sinister. Only one being can persuade people to turn evil into good and good into evil. The Bible clearly reveals the presence of a devil. Revelation 12:9 says that there is a devil “which deceiveth the whole world.” Jesus Christ called the devil “a liar, and the father of it” (John 8:44).

Biblical passages in Isaiah 14 and Ezekiel 28, among others, show that Satan has employed this strategy of mainstreaming evil from the very beginning. He sold rebellion, immorality and lawlessness as right and good.

When very powerful, very influential forces, including the prince of the power of the air himself (Ephesians 2:2), are pumping huge amounts of evil into the mainstream, what are you to do? The Apostle Paul gives the answer in 2 Thessalonians 2: “Therefore, brethren, stand fast, and hold the traditions which ye have been taught, whether by word, or our epistle” (verse 15).

To avoid deception, hold fast to the truth. Defend the law. Value tradition. Build your life around the knowledge of God. Love it with all your being. Let God’s Word be the standard by which you measure all truth. Don’t let your moral compass be moved by the elites, by crowd, or by the fake crowd. Rely on the power of God.

In an upside-down world, it’s the only way.