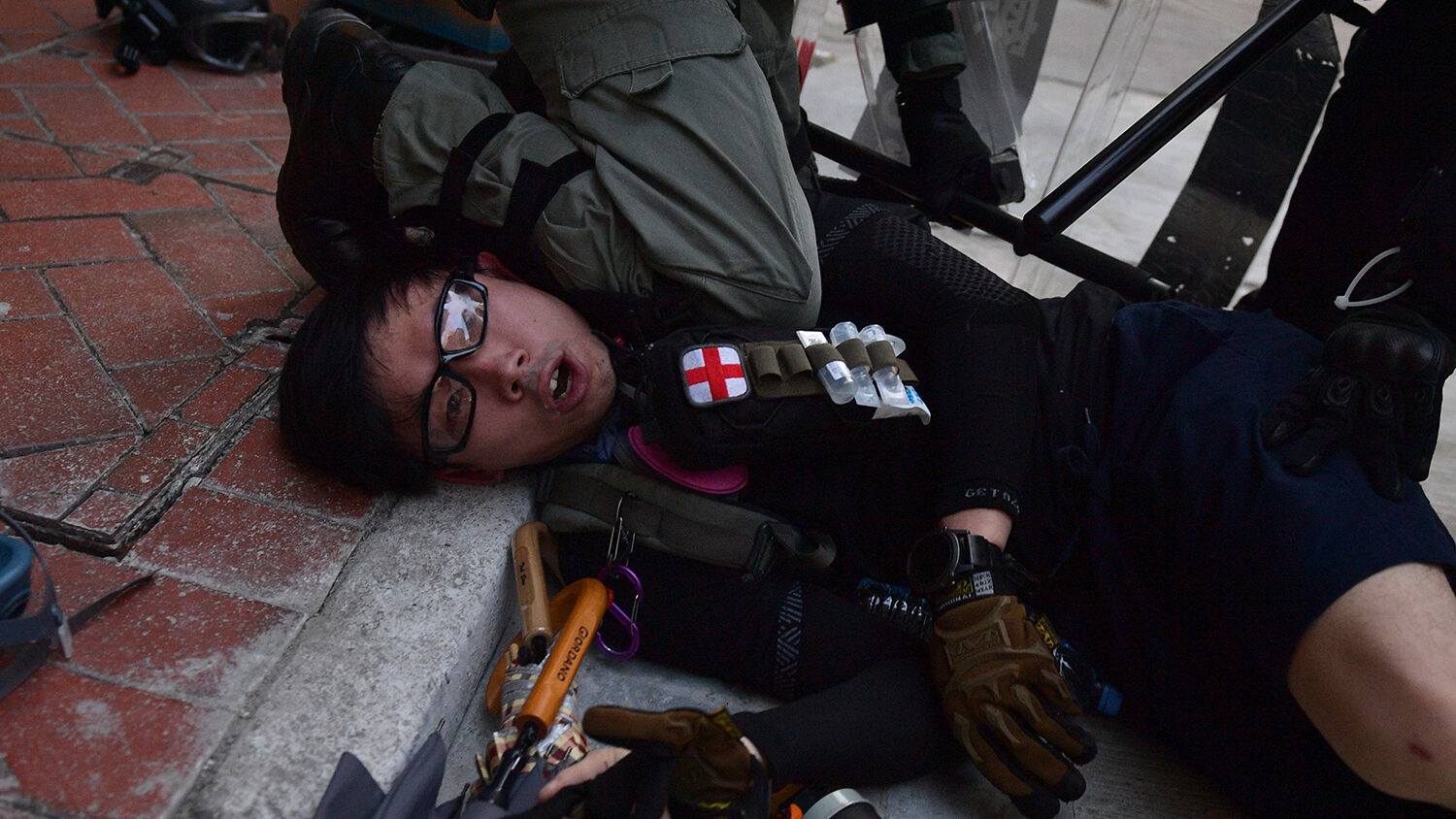 Hong Kong police detain a protester during demonstrations in the Wanchai district in Hong Kong on October 1.
NICOLAS ASFOURI/AFP/Getty Images

And there is no let-up in sight to the multiplying hatred and anger.

As China celebrated the 70th anniversary of its Communist founding on October 1, Hong Kong experienced one of its most violent days of protests. And the anger threatens to increase.

That day, Chinese President Xi Jinping stood before thousands of military personnel and fearsome weaponry, boldly declaring that “no force … can shake the foundation” of his nation. Some 1,300 miles to the south, thousands of Hong Kongers took to the streets in defiance of such a claim.

The city went into lockdown as the streets filled with protesters fighting the police with poles, stones, corrosive liquids and petrol bombs. It was the largest day of simultaneous protests since the unrest began. At least 13 protests led to the shutdown of 47 public transport stations and more than 25 shopping centers.

The approximately 6,000 police deployed that day arrested almost 270 people, more than on any other day of protests. The police fired 900 rubber bullets and used more rounds of tear gas than in the first two months of protests combined.

An 18-year-old student was shot in the chest, becoming the first protester to be injured with a live round since the protests began. The full extent of this incident may not yet be fully realized, but many warn it could breathe new life into the angry protests.

The Civil Human Rights Front, which has organized several large protests, posted the following on Facebook: “We will be even more united, even more determined in our resistance. From now on, October 1st will be an anniversary for the suppression of Hong Kong people with live rounds.” Protests have ramped up in the days following the reported shooting, leading to police calls for citywide curfews and other laws to keep people off the streets.

There has been a tragic escalation of tensions, and Hong Kong has become a tinder box. The explosion of anger today should be condemned, but it is the result of the brutal actions of the authorities to what were initially peaceful protests. It is particularly worrying to see credible reports that China has doubled the number of troops in Hong Kong to 12,000 ….

It is important to understand how frightening it must be to live in Hong Kong today. If you were one of the 2 million people (in a region of 7 million) who have been on the streets over the last 100 days to demand basic human rights and universal suffrage, there is a good chance that you would have seen your friends and family beaten, sprayed with tear gas, and arbitrarily arrested.

Those taking part in legitimate protests have had to wear masks for fear of being kidnapped and taken to mainland China for a prearranged show trial.

Quillette detailed the example of one young man who traveled from mainland China to Hong Kong to take part in the protests. He held up a sign reading, “I come from the mainland. Thank you, Hong Kongers! Don’t give up, fight for freedom!” Once he returned to the mainland, the police arrested him. They threatened to beat him to death for betraying China. When he was released 10 days later, he fled to Thailand.

With reports that China is quietly boosting troop numbers in Hong Kong, many fear the Communists will succeed in getting control. But Hong Kong isn’t the only place they’re after. “If Xi manages to break the will of Hong Kong, there can be little doubt that he will cast his gaze across the Taiwan Strait for his next target,” wrote Quillette.

Pro-democracy lawmaker Ray Chan said, “Hong Kong and Taiwan are both at the front line of the global fight to stop Beijing’s creeping authoritarianism and control. Our cooperation and mutual support will be key to defending our freedom.”

Trumpet editor in chief Gerald Flurry wrote in July 2016, “China is intimidating the nations of Southeast Asia into submission to its will. It is forcing these countries to do what it wants. Everything is headed in the direction of war.” We see China’s push for dominance on display in Hong Kong. But China won’t stop there. It will keep pushing outward. It will keep working to take over the South China Sea, a vital trade route through which $5.3 trillion in trade passes each year. That’s one third of international maritime commerce.

It is prophecies such as this that reveal why the British handover of Hong Kong to China in 1997 was such a momentous day and why the Trumpet continues to prophesy the continued degradation of Hong Kong’s freedom until it falls under complete control of China. Their lax stance against China and their handover of such pivotal sea gates will ultimately lead to Britain’s and America’s demise.

To understand where the raging protests in Hong Kong are headed, please read Mr. Flurry’s article “China Is Steering the World Toward War.”