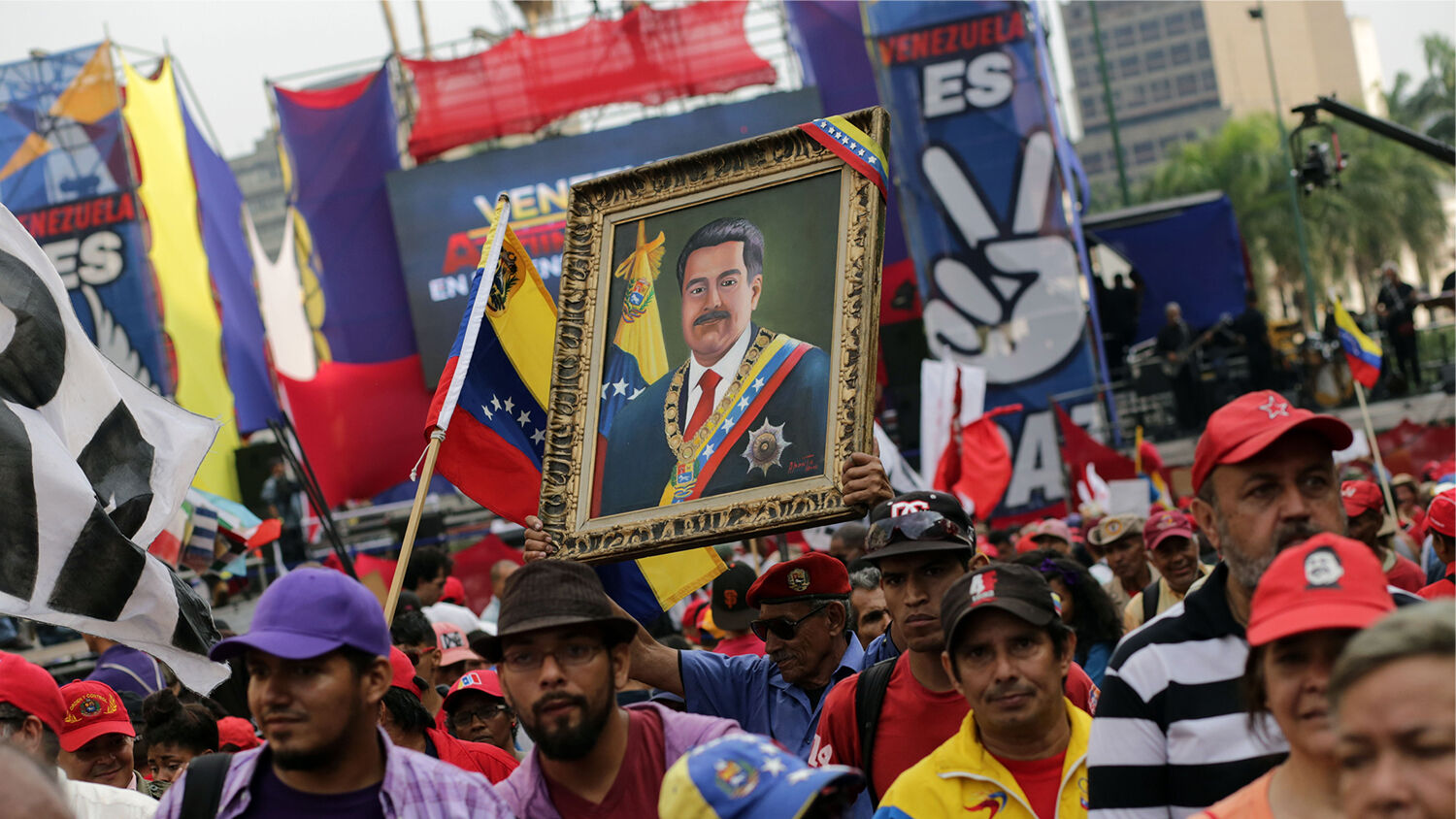 Iran is using “killer drones” to terrorize Israel and Western interests in the Middle East.

On August 22, an Iranian terrorist cell organized and trained by Qassem Suleimani, commander of Iran’s Quds Force, was recorded on camera by Israeli forces as it prepared to launch “a large-scale attack of multiple killer drones” from Israel’s Golan Heights.

Israel thwarted the attack, which could have killed Israeli civilians. Two days later, it conducted air strikes that it said destroyed the Iranian terrorist base associated with the drone launch attempt. In a rare announcement on August 25, Israel publicly acknowledged that it had conducted the attacks.

Soon after, Iranian-sponsored Houthi rebels in Yemen launched drones targeting Abha Airport in Saudi Arabia. Later that day, Israel preemptively attacked two Iranian terrorist proxies in Lebanon, one belonging to Hezbollah and the other to the Popular Front for the Liberation of Palestine-General Command.

“The drones, air strikes and tensions stretching from Yemen to Iraq and then to Syria and Beirut comprise an arc of simmering conflict that links Iran’s role throughout the region,” Middle East analyst Seth Frantzman wrote in the Jerusalem Post. “[T]he patchwork of Iranian-linked paramilitaries are entrenched in a corridor of influence stretching from Beirut to Baghdad. This has been called Iran’s ‘land bridge,’ and it came into full view over the weekend [of August 24-25].”

Then on September 14, Iran’s drones were again on display as about a dozen aircraft struck Saudi Arabia’s Abqaiq oil processing facility, the largest such facility in the world. Satellite images released by United States officials showed 17 structures damaged in the attack, most notably its storage tanks, displaying an unprecedented level of precision by Iran.

These attacks cut Saudi oil output in half, which amounted to 6 percent of the world’s daily amount. In the two days following the attack, the world oil price shot up over 20 percent, highlighting high-profile targets’ vulnerability to sophisticated Iranian drones.

The “arc of simmering conflict” poses a great threat to Israel, and Bible prophecy says in Zechariah 14:2 that it will eventually lead to East Jerusalem falling to Arab control.

The United States has initiated direct talks with Iran-backed Houthi rebels in Yemen.

“The success of Yemen’s southern secessionists in taking over the city of Aden … has effectively undermined all efforts to restore legitimate authority to the government of President Abed Rabbo Mansour Hadi,” Al Jazeera wrote. “If not reversed, the takeover of Aden by southern secessionists may well be the final nail in the coffin of Yemen’s unity and territorial integrity” (August 20).

If one of these scenarios occurs, a new radical Islamist state influenced by Iran will exist next to the Bab el-Mandeb, a crucial strait that facilitates almost 5 million barrels of petroleum products per day, more than half of which continues sailing toward Europe and North America. National Interest has called it the world’s most dangerous shipping lane: China, France, Japan, Saudi Arabia, the United Kingdom and the United States all have military bases on the western side of the strait.

“The Houthis’ takeover of Yemen was not just a grassroots revolution,” Trumpet editor in chief Gerald Flurry wrote in “Iran Gets a Stranglehold on the Middle East.” “It was a part of a deliberate and calculated Iranian strategy to conquer the Red Sea.”

While an Iranian conquest of the Bad el-Mandeb and the Red Sea poses a threat to Europe, the U. S., Israel and many other nations, Bible prophecy specifies that a European power will be the one to violently confront this growing threat.

Facing increased political pressure, Italian Prime Minister Giuseppe Conte announced his resignation on August 20. His government lasted only 14 months, and now Italy again faces political uncertainty. This new turmoil has been caused by the well-calculated moves of a man whom Conte calls a traitor, yet millions of Italians call a hero: Interior Minister Matteo Salvini.

Since the formation of Italy’s government in May 2018, support for Salvini’s Lega Party has more than doubled to 38 percent. Under Italy’s current constitution, if a party receives more than 40 percent of the popular vote, it has a majority in the legislature. Salvini is tantalizingly close.

Salvini brought down the Conte government, but two other parties joined to form a new government and prevent new elections. They both stand to lose votes in an election, but they have little else in common.

Meanwhile, Salvini remains popular. As interior minister, he has aggressively delivered on his campaign promise to reduce migration, closing harbors to migrants, refusing entry to those rescued at sea, and dramatically reducing the flow of migrants. Although the pope has criticized some of his views, Salvini’s projection of a religious image has resulted in increasing popularity among Italian Catholics.

Some compare Salvini to Benito Mussolini. Many still view the World War II Italian dictator favorably for his economic successes and his popularity with the people. His many supporters have even given him a similar nickname. Mussolini was Il Duce (The Chief). Salvini is Il Capitano (The Captain).

To learn more, read Who or What Is the Prophetic Beast?, by Herbert W. Armstrong.

In 1939, German tanks overran Poland, sparking World War II. Eighty years later, the tanks are coming back, but this time, they will be imports to equip Polish armed forces. On August 16, Poland announced its intention to join the European Main Battle Tank project.

Defensenews.com wrote, “Poland’s new desire to join the European Main Battle Tank project, an initiative spearheaded by the Franco-German tandem, is part of a larger regional trend under which numerous Eastern European allies are pursuing plans to acquire new vehicles and replace their Soviet-designed tracked and wheeled rides” (August 27).

But the future of European armor lies in Germany’s and France’s cooperation in building a new supertank, which comes as many European countries fear an invasion and need to modernize their forces.

Herbert W. Armstrong wrote in 1980 that fear of Russia “will be the spark to bring the heads of nations in Europe together with the Vatican to form a ‘United Nations of Europe.’” Europe is already building its united military. To learn more, read “Why the Trumpet Watches Europe’s Push Toward a Unified Military.”

The Alternative für Deutschland (AfD) became the second-largest party in the German states of Saxony and Brandenburg after state elections on September 1. The historic gains show that the far right is gaining greater acceptance among ordinary Germans.

In Saxony, the AfD rose from 9.7 percent in 2014 to 27.5 percent on September 1. It now trails the state’s governing party, Chancellor Angela Merkel’s Christian Democratic Union, by only 4.5 percent. In Brandenburg, the AfD jumped from 12.2 percent to 23.5 percent, only 2.7 percent less than the more mainstream Social Democratic Party. These victories toppled the ruling coalition in both states.

The popularity of the AfD is increasing because it is offering what many Germans crave: strong leadership.

An AfD position paper on the German military called for more soldiers, for removing a constitutional ban on the government deploying troops within the country, and for the development of nuclear weapons.

A decade before Europe’s migrant crisis began, Trumpet editor in chief Gerald Flurry wrote, “Politics in Europe are going to shift dramatically to the right” (Daniel Unlocks Revelation). He based this forecast on the Bible’s prophecies of strong leadership in Germany. The success of the AfD shows that Germans have a strong appetite for the type of leadership that the Bible prophesies. Learn more by requesting your free copy of A Strong German Leader Is Imminent by Gerald Flurry.

Geopolitical Futures noted on August 22 that the eight nations were “a curious set of bedfellows,” since significant tension exists between India and Pakistan, India and China, Kyrgyzstan and China, and Kazakhstan and China. Yet that animosity was not strong enough to prevent these nations from rehearsing for war together under Russia’s leadership. Geopolitical Futures called the drills a “sign that Moscow still holds a large degree of influence over this part of the world.”

Bible prophecy states that the “end time” will be defined partly by the rise of an Asian power bloc led by Russia (Ezekiel 38). Revelation 9:16 numbers this combined Asian military at 200 million personnel. Such an unprecedented force could only be produced by the combined populations of Russia, China, India and other Asian allies. These prophecies are explained in Russia and China in Prophecy.

At the beginning of August, the village of Gugutiantkari was located inside the free Republic of Georgia. But now it is in Russian-controlled territory. Russian forces had quietly and unlawfully relocated their razor-wire border fences to confine the village inside Russian-occupied South Ossetia.

Gugutiantkari and its people are the latest victims of Russian President Vladimir Putin’s “creeping occupation” of Georgia, as his forces push deeper into the former Soviet nation.

In August 2008, Russia invaded Georgia and asserted control over South Ossetia and Abkhazia, equating to a fifth of its territory. Since first erecting miles of fencing around these two regions, Russian forces have engaged in at least 57 instances of “borderization,” moving the fences ever deeper into Georgia.

When Russia invaded Georgia, Trumpet editor in chief Gerald Flurry said the move marked the historic “beginning of a dangerous new era.” Eleven years on, Russia is moving ever deeper into Georgia, it is in its sixth year of war in eastern Ukraine, has forcibly annexed the peninsula of Crimea, and has spread its destabilizing activities to Venezuela, the Middle East and even the Arctic. The significance of this trend is explained in our free booklet The Prophesied ‘Prince of Russia.’

During the violence, at least 50 shops were looted and burned in Johannesburg, the nation’s largest city, and in the capital, Pretoria. As of September 9, at least 10 people had been killed and more than 420 had been arrested.

The violence began on September 1 when native South African truckers began a nationwide strike to protest increasing employment of foreigners. “People of South Africa are hungry, they are sitting at home … while companies in South Africa are employing foreigners [because] its cheap labor,” one official from the All Truck Drivers Foundation told Agence France-Presse. “We are hungry and angry.”

While the All Truck Drivers Foundation said it didn’t incite the violence or even the strike, a group known as Sisonke People’s Forum reportedly circulated a pamphlet on social media inciting South Africans to chase away foreigners, accusing them of stealing jobs and selling narcotics.

The Bible explains the root cause of such crimes and evils: “You are jealous and covet [what others have] and your lust goes unfulfilled; so you murder. You are envious and cannot obtain; … so you fight and battle. You do not have because you do not ask [it of God]. You ask [God for something] and do not receive it, because you ask with wrong motives …” (James 4:1-3; Amplified Bible).