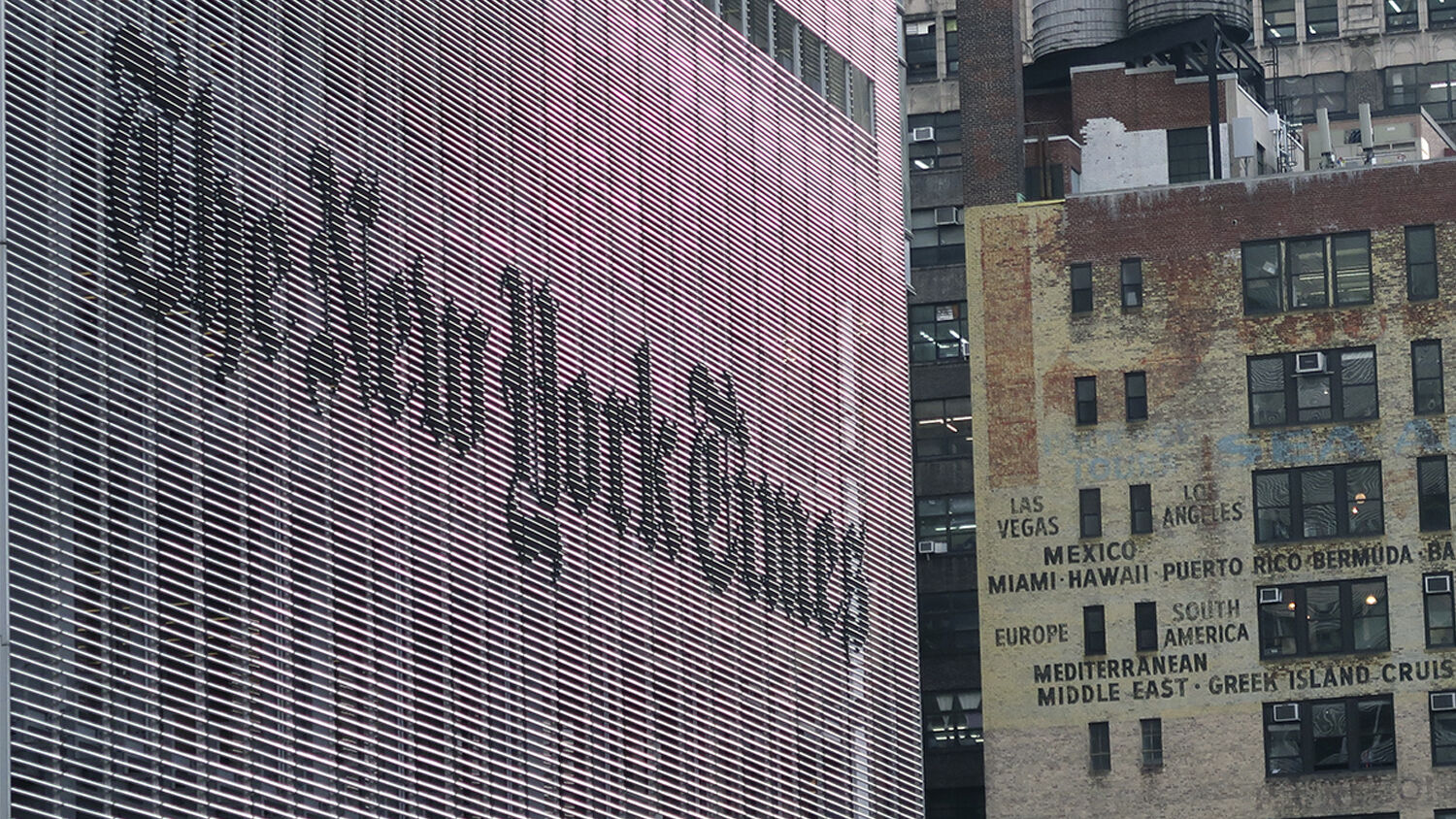 The sun reflects off the facade of the New York Times building in New York City.
Gary Hershorn/Getty Images

For two years, America’s news has been dominated by stories of supposed collusion between United States President Donald Trump and Russia. Since Robert Mueller’s investigation failed to find any proof of this, the story appears to have finally died. However, a leaked transcript of an August 12 meeting shows that the New York Times has found a new angle against the president: racism.

In the leaked transcript, New York Times executive editor Dean Baquet addressed the single focus of their reporting for the past two years: “We built our newsroom to cover one story [Russian collusion], and we did it truly well.” But with the upcoming U.S. elections, the New York Times is preparing to “regroup, and shift resources and emphasis to take on a different story. … It is a story that requires deep investigation into people who peddle hatred [i.e. Donald Trump], but it is also a story that requires imaginative use of all our muscles to write about race and class in a deeper way than we have in years.”

Building on the editor’s statement, one employee got to the core of what Baquet meant:

I’m wondering to what extent you think that the fact of racism and white supremacy being sort of the foundation of [America] should play into our reporting. Just because it feels, to me, like it should be a starting point, you know? … I just feel like racism is in everything. It should be considered in our science reporting, in our culture reporting, in our national reporting. And so, to me, it’s less about the individual instances of racism, and sort of how we’re thinking about racism and white supremacy as the foundation of all of the systems in the country. And I think particularly as we are launching a 1619 Project, I feel like that’s going to open us up to even more criticism from people who are like, “OK, well you’re saying this, and you’re producing this big project about this. But are you guys actually considering this in your daily reporting?”

According to revisionist historians, the U.S. was founded in 1619 when the first African slaves came to America. According to the New York Times, all U.S. institutions are founded on slavery and racism. Consequently, this is the context, or the “starting point,” from which the New York Times will report for the next two years.

As Trumpet Daily Radio Show host Stephen Flurry pointed out in his August 19 program, the news and broadcasting media rely on the New York Times for their playbook. So when it says that all reporting should be founded on the “fact” that the story of America is the story of racism and white supremacy, you can be sure that this will dominate much of America’s news for the next two years.

Sen. Ted Cruz, a Republican from Texas, recognized the dangers of this approach, tweeting:

If you care about journalism, or the First Amendt, READ the transcript. The Editor says (in effect) “for 2 yrs, we covered ‘Russia, Russia, Russia,’ facts be damned; now we’ll scream ‘racism, racism, racism’ for 18 mos, and the rest of the media follow us.” That’s not journalism. https://t.co/TPkpB0DjNj

What is motivating the New York Times is not journalism, it is an agenda. In an August 17 Washington Examiner article, journalist Byron York wrote:

Perhaps when you think of the founding of the United States, you think of the Declaration of Independence, the Constitution, the Bill of Rights, the Federalist Papers. Now, the New York Times wants to “reframe” your understanding of the nation’s founding. In the Times’ view (which it hopes to make the view of millions of Americans), the country was actually founded in 1619, when the first Africans were brought to North America, to Virginia, to be sold as slaves.

At the core of the New York Times’ agenda is an attack on God and the Bible.

The United States was built by men striving to create freedom founded on God’s inspired Word. Historian Paul Johnson wrote that America’s Founding Fathers had “put political and religious freedom before riches” and started “an experiment designed to establish the rule of God on Earth.” The Constitution, the supreme law of the land, was founded on biblical principles. Satan hates this, and he has stirred up this hatred in journalists who are carrying on his agenda.

In the Declaration of Independence, the document that officially declared the U.S. independent of England, Thomas Jefferson wrote, “We hold these truths to be self-evident, that all men are created equal, that they are endowed by their Creator with certain unalienable rights, that among these are life, liberty and the pursuit of happiness ….”

During this 400th anniversary of 1619, the New York Times is preparing to inundate the American people with its racist view of history.

The goal of the 1619 Project is “to reframe the country’s history, understanding 1619 as our true founding, and placing the consequences of slavery and the contributions of black Americans at the very center of the story we tell ourselves about who we are.” In other words, as Byron York put it, “The basic thrust of the 1619 Project is that everything in American history is explained by slavery and race.”

The New York Times has already dedicated an entire edition of its magazine to the 1619 Project. The edition uses this revisionist history to explain a range of topics in American society, including:

The New York Times is also attempting to bring this revisionist history into the classroom by working with the Pulitzer Center (not connected to the Pulitzer Prize) to produce reading guides, activities and other resources in a 1619 Project curriculum.

York concluded his article by explaining the focus of the 1619 Project:

So the Times has two big plans. One would be big enough: to focus on the universe of racism accusations that increasingly surround the president at a time when he just happens to be running for reelection. But the other is even bigger: to “reframe” American history in accordance with the values of Times editors. It’s an extraordinarily ambitious undertaking for people in what used to be known more simply as the news business.

This will be the angle of all their reporting from now on.

This is exactly what Bible prophecy warns will happen. America is about to be divided and torn apart in a second civil war.

These journalists and politicians who are stirring up hatred and racism are leading the country toward the suffering and violence described in Isaiah 1: “Your country is desolate, your cities are burned with fire: your land, strangers [Gentiles] devour it in your presence, and it is desolate, as overthrown by strangers” (verse 7). This is about race wars destroying our cities. And God is allowing this destruction because of America’s sins, because the nation is “laden with iniquity” (verse 4).

Trumpet editor in chief Gerald Flurry writes about these verses in his book Ezekiel: The End-Time Prophet:

“Your cities are burned”! And who does it? “Strangers [Gentiles] devour it in your presence”!

This is a terrifying passage! Because of the sin these nations are laden with, and because of the weakness of our leaders, we will experience desolation and burning—all at the hands of “strangers.” In other words, race riots and terrorism are going to get much worse.

The Prophet Ezekiel issues a similar warning: “Make a chain: for the land is full of bloody crimes, and the city is full of violence. … Destruction cometh; and they shall seek peace, and there shall be none” (Ezekiel 7:23, 25).

What the New York Times is doing, the agenda that it is not just promoting but forcing on the public, is leading to this end. It is stirring up racial hatred that will end in death and suffering as America’s cities burn. Abraham Lincoln was right when he quoted Jesus Christ: A house divided against itself cannot stand. This is where these events are leading.

To learn more about this future, read “Terrorism and Race Riots,” by Mr. Gerald Flurry.