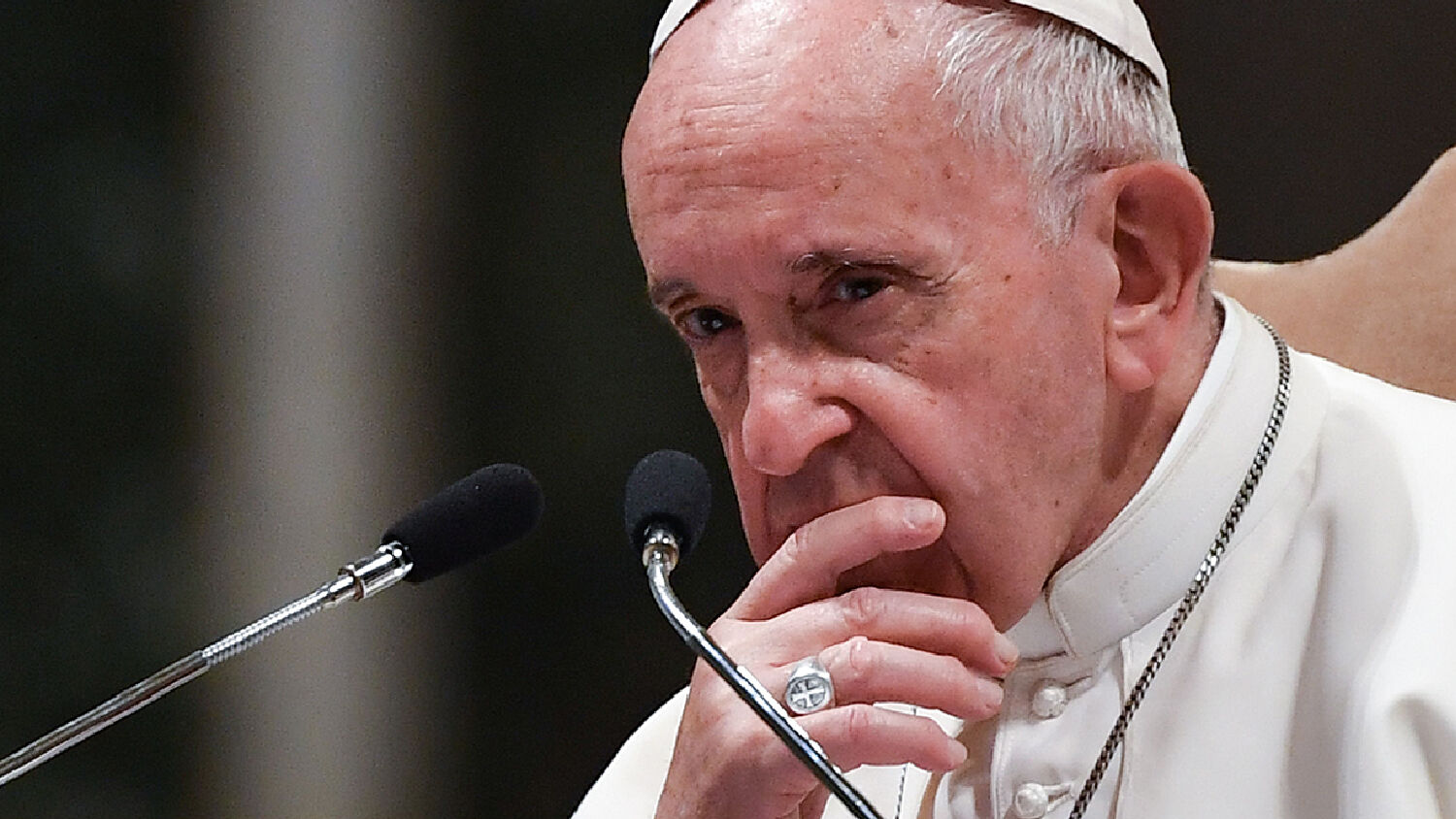 In an interview with Italian newspaper La Stampa, published August 9, he singled out those who talk about putting their own nations first: “I am concerned because we hear speeches that resemble those of Hitler in 1934. ‘Us first, We … We …’—these are frightening thoughts.”

Which world leader famously uses an “us first” slogan?

Italy’s Lega Nord Party has adopted the slogan “Italia first.” I’m sure the pope was including it in his criticism. But he clearly did not have just that one party in mind. According to the pope’s statement, anyone who says “America first” is “like Hitler.” America Magazine wrote, “Pope Francis’s remarks were read by observers in Rome as also alluding to the politics of U.S. President Donald Trump and his ‘America first’ policies.”

Why would the pope be so critical of President Donald Trump?

It’s not just the pope. Catholic bishops in the U.S. are becoming increasingly critical of President Trump.

At the end of July, President Trump drew a lot of criticism for tweeting that Baltimore, Maryland, is a “rat and rodent infested mess.”

According to the radical left in the Democratic Party and mainstream media, the statement was racist—despite the fact that Bernie Sanders, former Baltimore Mayor Catherine Pugh and the Associated Press, among many others, have all said similar things.

On August 1, Archbishop of Washington Wilton Gregory publicly criticized President Trump’s comments on Baltimore, along with Democratic Rep. Ilhan Omar and Baltimore, saying, “I fear that recent public comments by our president and others, and the responses they have generated, have deepened divisions and diminished our national life.”

“Our faith teaches us that respect for people of every race, religion, gender, ethnicity and background are requirements of fundamental human dignity and basic decency. … Comments which dismiss, demean or demonize any of God’s children are destructive of the common good and a denial of our national pledge of ‘liberty and justice for all,’” he said. The implication is that President Trump does not respect people of every race, and thus is racist.

On July 29, a collection of religious leaders in Maryland, including Catholic Archbishop William Lori and leaders from the United Methodist Church and the Evangelic Lutheran Church in America, released a statement. They said President Trump’s comments on Baltimore were “horrible, demeaning and beneath the dignity of a political leader.” They said Mr. Tump failed to see the “beauty” in “cities, which bring together diverse races”—another implied accusation of racism.

“Mr. President, as religious leaders, we implore you: In the name of all that is good, healthy and decent, stop putting people down,” they wrote. “Enough of the harmful rhetoric that angers and discourages the people and communities you are called to serve—more than you know.”

Then last week, Archbishop of San Antonio Gustavo Garcia-Siller issued the most direct criticism of the president. In the wake of the mass shootings just over a week ago, Garcia-Siller joined the left-wing media in pinning the blame on President Trump. He told Mr. Trump to “stop hate and racism, starting with yourself.”

He also tweeted, “President, you are [a] poor man, a very weak man. Stop damaging people. Please! … President stop your hatred. People in the U.S. deserve better.” He then followed that tweet up with, “Please stop racism. Please stop hatred. Please be people of good will. Please stop fake prayer. You have caused too much damage already. You have destroyed people’s lives. Stop, stop, stop. Please, please, please.”

These kinds of statements are shocking enough coming from an opposing presidential candidate. If a democratic politician had called the president a racist five or 10 years ago, it would have been big news. But now a Catholic leader, supposedly nonpolitical and completely neutral, is calling President Trump a racist.

The Catholic Church has to be careful, however. When President Trump was elected, 52 percent of white Catholics said they supported him. Meanwhile, following the child abuse and pedophilia scandals, the Catholic hierarchy’s standing has never been lower in the U.S.

This Catholic support for President Trump is probably why the archbishop of San Antonio later issued a non-apology and deleted his tweets. He didn’t say that what he said was incorrect or wrong, but that he was wrong to focus on the individual the way he did and that the office of the president deserved respect. The Catholic leadership has to be careful not to alienate its own members.

But it is still shocking to have the pope come out and say that anybody who says “Our nation first” is like Hitler. That is an extreme level of opposition to the U.S. president and America.

There has always been a heavy strain of anti-Americanism in Europe, but it is now being exposed.

The European media is helping stir its populations into an anti-Trump frenzy. Take, for example, the covers of Der Spiegel, Europe’s largest newsmagazine. It has portrayed Donald Trump as a middle finger to Europe, a terrorist beheading Lady Liberty, a subhuman ape, a baby riding a nuclear bomb, a meteor about to destroy Planet Earth, a tsunami destroying Washington, D.C., and a golfer striking a flaming Earth. Stern, a prominent German magazine, depicted President Trump as a Nazi. The Berlin Courier portrayed the whole world swearing at President Trump.

One study found that Germany’s public broadcaster, the ard, covers the American president more negatively than any other news source in the world—even more than cnn.

If you think that you are pounded by an anti-Trump message in the U.S. from cnn and msnbc, it is even worse in Germany. And now even the pope is adding to it by implying that President Trump is like Hitler.

U.S. media, more than European journalists, should know the truth about what is happening in America. Yet their coverage of the recent mass shootings was incredibly deceitful. They are making it easy for anybody who doesn’t like the U.S. to paint Americans as Nazis and their leader as Hitler.

This demonizing of America within Europe is dangerous.

Europe is already an economic superpower. Its economy rivals the U.S., and Germany is an export powerhouse. With this strong economic foundation, Europe could quickly become a major global military power. It already has far more military capability than people give it credit for. It would only take more unity and a stronger leader to utilize it. And things can change quickly.

Pope Francis is pushing for this unity. In his August 9 interview, he said:

Europe cannot and must not break apart. It is a historical, cultural, as well as a geographical unity. The dream of the founding fathers [of Europe] had substance because it was an implementation of this unity. Now we must not lose this heritage. … This unity has weakened over the years, partly because of administration problems and internal disagreements. But it must be saved. After the elections, I hope that a process to relaunch it begins and continues without interruption.

A united Europe that is against America would be a major shift in world politics.

America views Europe as a friend and ally, despite all the anti-American rhetoric. The U.S. depends on Europe and trusts European powers so much that it has given them nuclear weapons. Europe is basically a nuclear power because it has America’s bombs. That is a huge amount of trust. If someone is within your camp, they don’t even have to be all that powerful to take you down.

The Bible warns specifically about this danger.

In Jeremiah 30:14, God warns America, “All thy lovers have forgotten thee; they seek thee not ….” America has lovers that it trusts, but in the end, those lovers will turn against it.

God also tells America, “They give gifts to all whores: but thou givest thy gifts to all thy lovers, and hirest them, that they may come unto thee on every side for thy whoredom” (Ezekiel 16:33). What greater gift could America give than nuclear weapons?

For decades, late educator Herbert W. Armstrong foretold that the Roman Catholic Church would play a major role in uniting Europe and leading it against America. Now the pope is getting behind the Trump-is-like-Hitler narrative, while calling on Europe to unite.

The events we see taking place right now are prophesied in your Bible, and Mr. Armstrong spent decades warning about these prophecies. That fact is critical to remember because it shows that God is behind all of these events.

All of this will happen because, as Ezekiel 23:35 says, America has forgotten God. It has not trusted God for protection; it has instead looked to foreign powers.

In a World Tomorrow television broadcast in the 1980s, Mr. Armstrong talked about Matthew 22 and loving God with all your heart, soul and mind. He said:

We violate that as a nation. Now I don’t think we realize we are doing it—I don’t think we do at all. I think we sincerely think—we’ve just kidded ourselves into thinking—we’ve been deceived into believing—that we are really relying on God. But then you know, we think that God is sort of a myth, and He’s far off. Maybe He is not real? And maybe He couldn’t really help us? So we must depend on something that is real. We must depend on something that we can see. And so now we are so afraid of Russia, that the United States government feels that it must take a, what we call a “calculated risk” and try to build up Germany and Central Europe against Russia.

The only way America can prosper is by relying on God. God wants to bless us beyond anything we can imagine. That is why He is using America’s allies to punish us. He is allowing this hatred of America to build up in Europe to correct America.

But once America learns to look to God, He will give it unparalleled blessings. He will do that for any nation that repents and looks to Him.

You can learn more about this subject in Mr. Armstrong’s free book The United States and Britain in Prophecy. This book gives the foundation you need to understand what is happening in this world. It shows why all of these scriptures apply to modern-day America. It provides the understanding you need to truly comprehend the meaning behind world events.