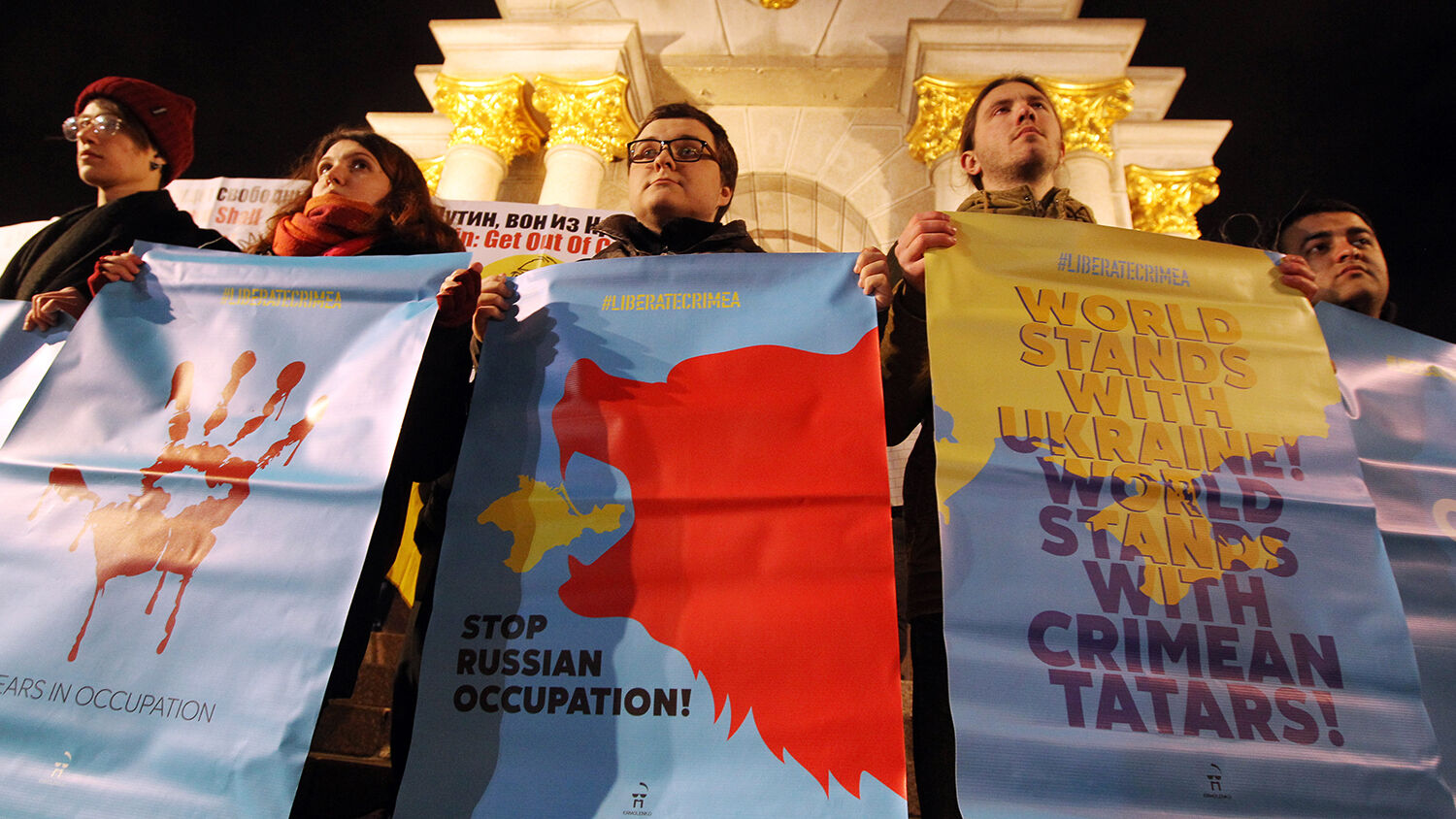 Ukrainians in Kiev’s Independence Square hold placards and portraits of the detainees and missing Crimean Tatars and pro-Ukrainian activists in Crimea during a rally on February 27, the fifth anniversary of Russia’s annexation of Crimea.
STR/NurPhoto/Getty Images

Putin amasses power, as he strives to revive the Soviet Union.

Since Russia annexed Crimea from Ukraine in 2014, the region has undergone significant degrees of ethnic cleansing. This process would normally spark outrage around the world, but Russia’s methods have gone relatively unnoticed and unreported. Meanwhile, an entire ethnic group is silently being uprooted from their homeland.

Ethnic cleansing, according to Merriam-Webster Dictionary, is “the expulsion, imprisonment or killing of an ethnic minority by a dominant majority in order to achieve ethnic homogeneity.” This is exactly what Russian President Vladimir Putin has been doing with the Crimean Tatars, a Turkic ethnic group. But unlike genocide, Putin’s method of “encouraging” the emigration of certain groups and the immigration of others much more readily flies under the radar.

Since 2014, Putin has led the expulsion of 30,000 to 40,000 Crimean Tatars and the destruction of many of their schools, religious and cultural monuments, and institutions, according to Eurasia Daily Monitor.

Russia has managed to avoid the public outcry by leading a “slow-motion” ethnic cleansing.

This pressure to choose “assimilation or expulsion,” as Eurasia Daily Monitor described it, is done by provoking Crimean Tatars so that they move or accept Russian citizenship. The disobedient are imprisoned to intimidate others.

A harrowing look at killings and kidnappings undertaken by Russia to scare off Crimea’s Muslim Tatars.

Rosstat, Russia’s statistical service, reveals this trend in Crimea. Between January and May 2019, Rosstat recorded the emigration of 12,740 people from Crimea and the immigration of 15,329 others. Rosstat does not specify the ethnicity of either of these groups; however, these numbers are almost assuredly the emigration of Crimean Tatars and ethnic Ukrainians and the immigration of ethnic Russians. Eurasia Daily Monitor wrote that this has been the trend since 2015 “but is now becoming increasingly dramatic.” Although the specific numbers may vary from source to source, what is undisputed is the large numbers of Crimean emigrants and Russian immigrants.

Radio Free Europe–Radio Liberty also reported on this trend in May 2018. According to Russian statistics, approximately 247,000 Russians have moved to Crimea since March 2014, while about 140,000 Crimean Tatars and Ukrainians have left the peninsula. According to Ukrainian officials, however, those numbers are much higher.

Borys Babin, the Ukrainian president’s Crimean representative, said, “We can say with certainty that we are talking about hundreds of thousands of people. An enormous number of bureaucrats are moving in with their families, and those family members are looking for work.” He went on to say that about 40,000 Crimeans registered as displaced on the Ukrainian mainland and many more have left but not yet registered.

Crimea’s Tatar leader even suggested that the number of Russian immigrants could be as high as 850,000 to 1 million. But, he said, “this is held as a military secret because they know perfectly well that it is a crime.”

Putin’s actions in Crimea, and the process of ethnic cleansing that he is leading, reveal his role as the biblically prophesied strongman of Russia.

A prophecy in Ezekiel 38 states, “Son of man, set your face against Gog, of the land of Magog, the prince of Rosh, Meshech, and Tubal, and prophesy against him” (verse 2; New King James Version).

In his booklet The Prophesied ‘Prince of Russia,’ Trumpet editor in chief Gerald Flurry identifies Meshech as a variation of the Russian spelling of Moscow and Tubal as the city of Tobolsk, named after the Tobol River. He writes:

Tobolsk was once the seat of Russian government over Siberia and was basically considered Russia’s Asian capital. … Rosh was the ancient name of Russia, once called Rus. Many encyclopedias and commentaries (such as the Jamieson, Fausset and Brown Commentary) recognize this. So who is this “prince” of Russia, Moscow and Tobolsk? The use of all three names shows that this is an individual ruler of all the peoples of Russia, from the west to the east. … This giant swath of land indicates the prince will probably conquer more nations of the former Soviet Union.

The “prince of Rosh” is prophesied to lead the end-time “kings of the east” (Revelation 16:12). This massive Eastern alliance of many Asian nations, including China, Japan and India, will wield a 200 million-man army (Revelation 9:16). Its leader, this “prince of Rosh,” will have considerable power at his disposal.

Through Putin’s actions today, we can see the makings of a strongman who could lead this formidable alliance.

Mr. Flurry says that this leader will “probably conquer more nations of the former Soviet Union.” This is exactly what Putin has done in Georgia and Crimea. In 2005, he called the collapse of the Soviet Union “the greatest geopolitical catastrophe of the century.”

Putin is “the dictator of Russia,” we write in Russia and China in Prophecy. Even though he does not “appear to exercise the kind of brutality of some of his predecessors, … he certainly is intent on using whatever power is necessary to secure his country’s resources and make Russia into a global power!”

Today’s ethnic cleansing in Crimea is a perfect example of this statement. Putin is doing exactly what former Soviet leader Joseph Stalin once did, only through much more inconspicuous means.

In 1944, Stalin accused Crimea’s Tatars of collaborating with the Nazis during World War ii. In truth, less than 5 percent of the population had supported the Nazis and some 80,000 others had actually fought in the Soviet Army. But Stalin used this lie to excuse a mass deportation of all Crimean Tatars. Over the course of a few days, they were loaded onto trains and transported to Central Asia. The deportation was carried out with excessive brutality, and some families were given only a 15-minute warning before being deported. Many Tatars who were accidentally left behind were beaten to death and thrown into the Black Sea. Those who survived the brutality were not given official permission to return to their homeland until 1974. The 1944 deportation has been labeled an act of genocide. But Putin has achieved a nearly identical objective, yet silently and with barely a passing mention.

75 years ago, the Soviets under Stalin committed genocide of Crimean Tatar people.
After #Russia’s illegal annexation of #Crimea in 2014, Crimean Tatars face the same threats, being killed, tortured and imprisoned for openly saying that #CrimeaIsUkraine pic.twitter.com/zRY9VAVUdM

Putin is quietly amassing power that will soon propel him into a powerful leadership position over many nations. To more thoroughly understand the end-time role of the prophesied “prince of Rosh” and the kings of the east alliance he will lead, read Mr. Flurry’s free booklet The Prophesied ‘Prince of Russia.’