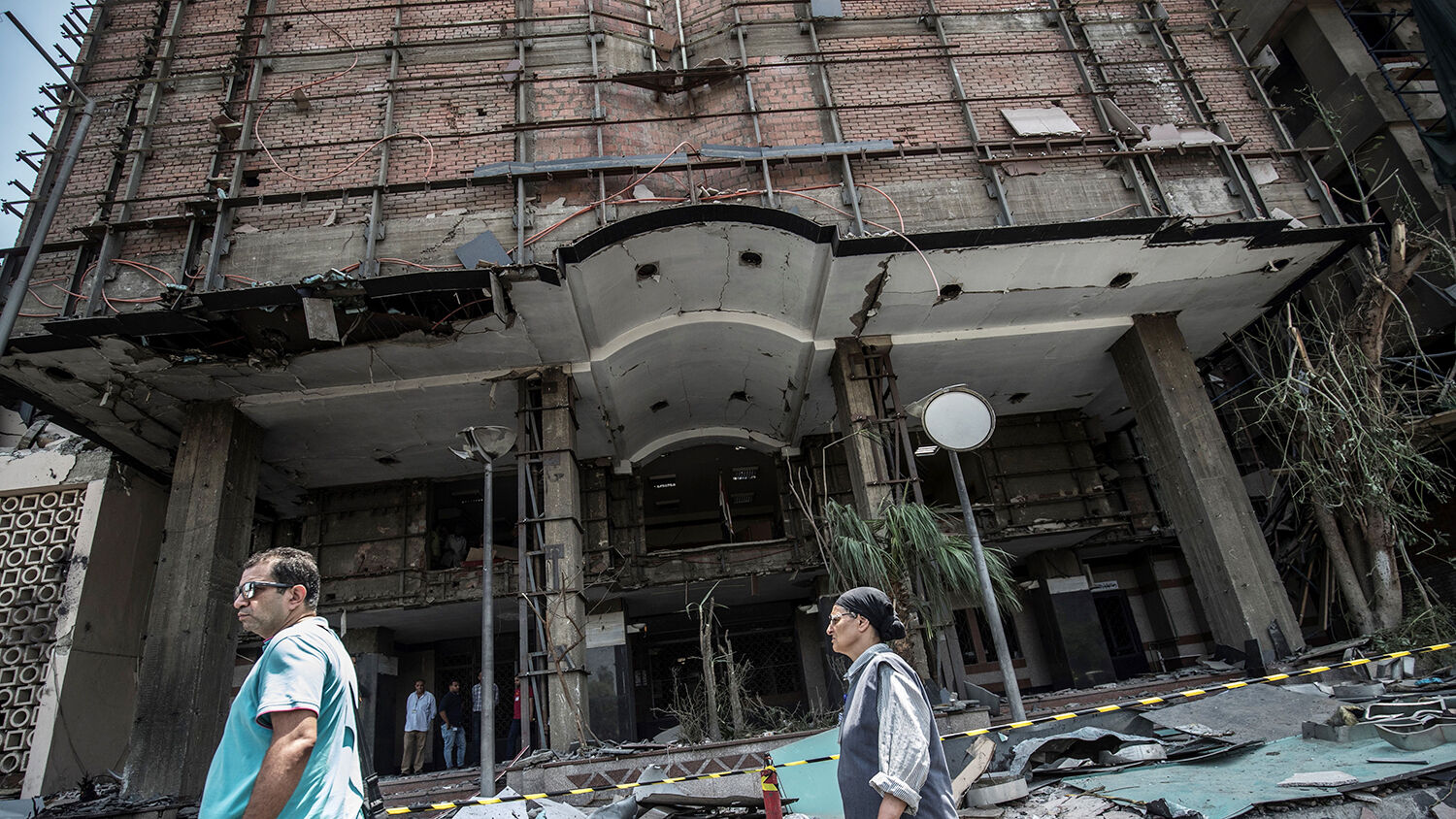 Egyptians walk outside the National Cancer Institute in the capital Cairo on August 5 where an explosion took place just before midnight the previous day.
Khaled Desouki/AFP/Getty Images.jpg

Will the Muslim Brotherhood bombings bring radical change in Egypt?

Egypt has just experienced one of its deadliest terror attacks. On Sunday evening, a car loaded with explosives blew up outside a cancer hospital in the center of Egypt’s capital, Cairo.

The car, which belonged to a faction of the Muslim Brotherhood, turned onto a one-way street and collided with an oncoming car shortly before midnight. The explosion and subsequent fire killed 20 people and injured 47 others. Reports immediately after the incident described bodies lying motionless on the ground, with people, cars and buildings engulfed in flames. The hospital and several surrounding buildings were significantly damaged.

A statement released by Egypt’s Interior Ministry on August 5 said that the explosives in the car were apparently intended for a different target, but were detonated early by the collision. The ministry said that early investigations “showed that the ‘Hasm’ movement that belongs to the terrorist Muslim Brotherhood is behind the rigging of the vehicle as a prelude to carrying out a terrorist attack by one of its members.”

Since his election in 2014, President Abdel Fattah al-Sisi has led a crackdown on the Muslim Brotherhood. His predecessor, Mohamed Morsi, was a member of the Brotherhood but was overthrown in 2013 in a military coup led by Sisi.

Hasm is believed to be behind several terrorist attacks that have occurred since its rise after Morsi’s removal. These attacks are fueling the fire of unrest spreading throughout the region and gradually encroaching on Egypt. These events are leading to radical change in Egypt, as revealed by Bible prophecy.

A prophecy in Daniel 11:40-42 shows that in this end time Egypt will ally with Iran, in a power known as “the king of the south.” (Please read our free booklet The King of the South to prove Iran’s future role.) Trumpet editor in chief Gerald Flurry wrote in 2003, “This prophecy indicates that there would be a radical change in Egyptian politics!” And Mr. Flurry has indicated that the Muslim Brotherhood could be part of this Islamic shift.

When the Muslim Brotherhood came to power in 2012 with Mohamed Morsi, it began to fulfill this prophetic alignment. Although it only held power for one year, it worked to restore diplomatic relations with Iran and establish Egypt as an Islamist state.

The Muslim Brotherhood is heavily supported by Iran and still receives support from many Egyptians, particularly for its Islamic ideologies.

A 2013 Pew poll found that 74 percent of Muslims in Egypt favor Sharia becoming official law. The Muslim Brotherhood places great importance on the centrality of Islam to public and private life. Its slogan is: “Islam is the solution.” While Islamic support is high, the people are also desperate for the basic needs provided by the Brotherhood.

In his book Prisoners of Geography, Tim Marshall writes:

After Mubarak’s fall, when the radical Muslim Brotherhood preacher Yusuf al-Qaradawi returned from exile in Qatar, at least a million people came out to greet him, but few in the Western media called this the “voice of the people.” The liberals never had a chance. Nor do they now. This is not because the people of the region are radical; it is because if you are hungry and frightened, and you are offered either bread and security or the concept of democracy, the choice is not difficult.

Despite being Egypt’s first “democratically” elected president, Morsi’s leadership was radical and dictatorial. But in a time of unrest and uncertainty, when a government fails to provide solutions, what the people want most is change.

Regarding the origins of the Muslim Brotherhood, the Washington Post wrote, “The Brotherhood [built] its strength on a grassroots movement that provided services and support where the government fell short.” Just like Marshall said, food and safety for those hungry and frightened will always win out over democracy. The Muslim Brotherhood is using this to its advantage today.

While the Brotherhood is not currently campaigning on a promise of providing where the government is falling short, its terrorist activities could lead to the current government losing control. Increased unrest could give the terrorist group the pretext it needs to rise to power again and align Egypt with Iran.

The Carnegie Middle East Center wrote in March that despite Sisi’s attempted suppression of the Muslim Brotherhood, his efforts could in fact have been “counterproductive.” It continued by saying that this “could eat away at Sisi’s legitimacy and even the stability of his regime.” It later added:

[T]he nonmaterial costs of the Muslim Brotherhood’s persecution weigh heavily on an Egyptian leadership that vowed to ensure democratic freedoms, bring economic prosperity, and guarantee security in the face of Salafi-jihadi terrorism. If the regime is unable to meet the expectations it created, its popularity will suffer. This could provide new political openings for opposition to the president, affecting Egypt’s stability. Unfulfilled expectations and regime violence, observed Amr Darraj, a high-ranking Brotherhood member in exile, could result in unrest or even civil war, with terrible consequences for Egypt …. The Brotherhood cannot be defeated, not even by executing its leaders. Given the signs of organizational continuity, even renewal, Egypt’s political destiny will continue to be defined by the clash between the regime and Islamists.

The latest terrorist attack in Cairo and the many that have occurred recently are provoking this clash. Increased unrest causes increased dissatisfaction. And if the government fails to fulfill its promises of freedom, prosperity and protection, radical change could come quickly.

While the government still holds significant control right now, a radical change is ahead that will fulfill the Islamic alliance prophesied in Daniel 11. It is not a matter of if, but when. Daniel 11 will be fulfilled, even if the Islamists in Egypt have to bomb their way into power.

To understand more about this alliance and its role in end-time events, request your free copy of Mr. Flurry’s booklet The King of the South.