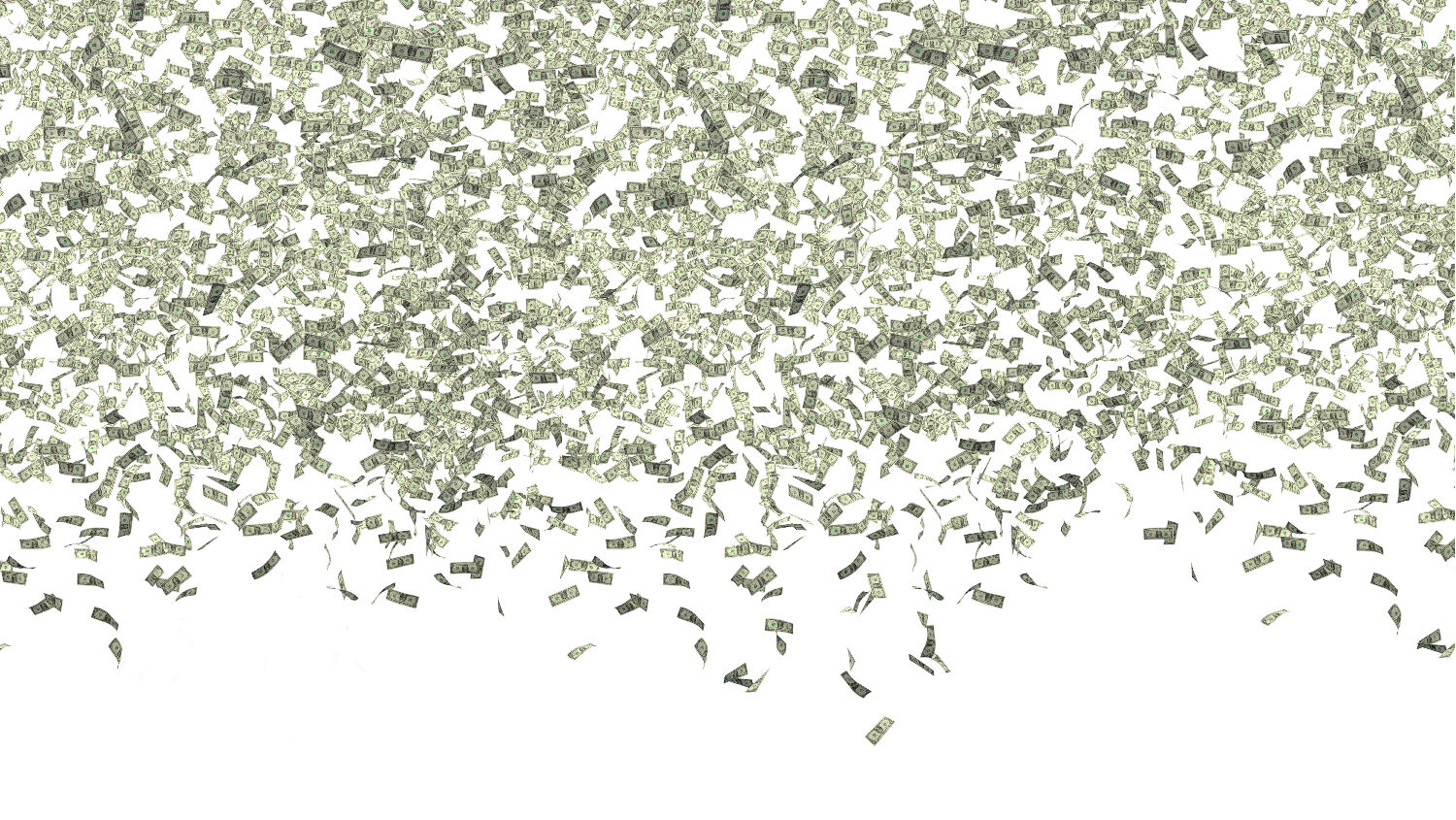 Alex and Rhoda Toth were struggling. With six kids and little income, it was hard to get by. Then, in 1990, they hit the jackpot. Literally—the Toths won $13 million in the lottery.

You’d think the story ends with and they all lived happily, richly ever after. But it doesn’t. The money changed their lives—until it ran out. The Toths filed for bankruptcy—twice. They ended up back in poverty. They were accused of resorting to tax fraud to try and keep their lifestyle going just a little bit longer. By the time Alex Toth died in 2008, their only electricity at home came from a car battery. Later, Rhoda pleaded guilty to tax evasion, was sentenced to two years in jail, and was fined $1.1 million.

Perhaps the most surprising part of the Toths’ story is how common it is. Around one third of lottery winners end up going bankrupt.

They all follow a similar pattern. Suddenly flush with enormous amounts of cash, they spend and spend: luxury holidays, houses, cars, friends, drugs.

No purchase seems out of reach. Expensive vices like drugs or gambling become affordable—and some succumb to the temptation. Many lottery winners collect their prize in yearly installments. So if they run out of cash for the year, they borrow more—after all there’s a lot of cash coming down the pipe.

But eventually that cashflow runs out. The money’s gone, or the debts get too large. Creditors come calling and the winners are left worse off than they started.

And this doesn’t just describe an indebted lottery winner. It describes the United States.

“If you won the lottery and were looking to buy a country to live in, the first one the estate agent would show you would be the United States of America,” wrote Tim Marshall in his book Prisoners of Geography. This temperate North American real estate offers the Atlantic and Pacific Oceans to keep the area both secure and well connected. The property houses more navigable rivers than the rest of the world put together—providing picturesque vistas and practical transport opportunities. The planet’s largest contiguous area of farmland and natural resources makes it an excellent investment. At one valuation by William Larson, from the Commerce Department’s Bureau of Economic Analysis, the estate is worth $23 trillion. And that’s just for the land—the buildings are extra.

That’s quite a lottery win. Just like the lottery winners taking the cash in installments, the United States generates a huge annual income. Each year the American economy produces the same amount as the economies of Japan, Germany, the United Kingdom, France, India and Italy combined.

But just as with lottery winners, it can’t fund everything.

That hasn’t stopped America from trying. The world’s largest military? We need to be safe. Medicare? We need to take care of the poor. Banks in trouble? We have to help! There are arguments to justify every expenditure, and those concerned about affordability are just killjoys.

“Successful” lottery winners—ones that don’t go bust—save or invest some of their money. The biblical patriarch Joseph, the world’s earliest recorded economic planner, saved wealth when times were good, and had it to spend when times went bad. In modern times, we flipped that method: Borrow when times are bad; pay it off when times are good.

Last Friday, President Donald Trump signed a new budget deal. It suspends the debt ceiling until July 2021 and borrows money left, right and center. The U.S. borrowed $546 billion in 2017, President Trump’s first year in office. The next year, the borrowing more than doubled, to $1.34 trillion. This year, the borrowing is $1.23 trillion.

The president of the Committee for a Responsible Federal Budget, Maya MacGuineas, said this could be “the worst budget agreement in our nation’s history,” calling it a “total abdication of fiscal responsibility by Congress and the president.”

The last time America was this indebted in relation to the size of its economy was in 1947—when the nation was paying off the massive borrowing required to finance the defeat of the Nazis.

But in 2019, the U.S. is not fighting Nazis. It’s adding postwar-level debt just to meet its day-to-day budget.

This is not sustainable. But people want to spend more.

Democratic presidential candidates are vying with each other to offer the most generous spending packages: free health care for all, free college, new green materials fitted to every building. These so-called lottery winners “think they’re invincible and powerful. They think they’re Superman.” We’re wealthy! The money could never run out, right?

Just like desperate lottery winners, the U.S. has resorted to “creative” financial practices to keep the party going. After the 2008 financial crisis, the Federal Reserve began creating money from nothing and lending it to state and local governments and banks (“quantitative easing”). The Fed insisted that it would “wind down” this easing at a later date. It would retrieve all the money it loaned and turn it back into nothing. More than 10 years on, this is happening extremely slowly.

Bankrupt lottery winners go from riches to rags quickly. They spend some time living the highlife, but then bills start to catch up with them. Suddenly, the full extent of their debts is revealed, and they crash into bankruptcy.

The same is set to happen to the U.S. The nation is enjoying the late phases of luxury holidays and fast cars, paid for by debt. But at some point—probably when the next downturn hits—everyone will realize the U.S. can’t pay.

We are watching the Toths’ story play out on a national level. And we know how it ends.

There is a source that explains how and why America received the biggest “lottery win” of all time. This windfall was not luck. The book of Genesis records God’s promise to Abraham that he would be a “father of many nations” (Genesis 17:5). In repeating these promises to Abraham’s descendants, God promised “the fatness of the earth, and plenty of corn and wine” (Genesis 27:28). The descendants of Abraham would “spread abroad” over all the Earth (Genesis 28:14).

The Jews know they descended from Abraham. But these prophecies could not possibly apply to the Jews alone. There is just one nation of Israel in the Middle East—not multiple nations. And Jews have never been blessed with prosperity and national power on the same scale as the promises to Abraham.

These prophecies, and many others, perfectly describe America’s massive prosperity. As The United States and Britain in Prophecy proves, America also descended from Abraham, and it is one of the “many nations” promised to him. The windfall came to America because of God’s promises to Abraham. The U.S. didn’t even do the national equivalent of buying a lottery ticket; God just showered it with blessings.

But the Bible warns that in order to avoid squandering and catastrophically losing this windfall, America must obey God.

The Prophet Isaiah, for example, preserved his message in a book “for the time to come.” His warning was intended for more than the ancient kingdom of Judah. There’s a message for our people today.

“Their land also is full of silver and gold, neither is there any end of their treasures; their land is also full of horses, neither is there any end of their chariots” (Isaiah 2:7). What an accurate description of America today. The land is full of so much wealth and power that many feel secure. As a nation, the U.S. “feels like Superman”—or a superpower.

But Isaiah warns in the next verse, “Their land also is full of idols; they worship the work of their own hands, that which their own fingers have made” (verse 8).

The nation is proud and sinful. We don’t worship God—instead we make gods out of things. We worship stuff, and constantly try to grab more of the things we make with our own hands. Just like many of the bankrupt lottery winners, America lacks the character to hold on to its wealth. And just as surely as people of low character suffer the automatic consequences of their actions, so too does their nation.

On top of the inevitable consequences of America’s behavior, God will add additional punishments, which the rest of Isaiah 2 describes. Why? God wants to do more than just give the nation another loan, or even another windfall. He wants to correct its character. That way its people can handle the massive blessings He wants to give them. God wants to bless the United States, just as He wants to bless all people. But as we see today, wealth without character leads to ruin. For America to really benefit from all it has been given, it needs the blessing of God’s correction.

America’s harsh sins require hard correction. But it is being administered by a loving God who wants to prepare the nation for unimaginable blessings. And He will correct and then bless the U.S. for the express purpose of using it to bless all nations.

You can learn more about God’s plan and purpose for the nations in our free book The United States and Britain in Prophecy, by Herbert W. Armstrong.