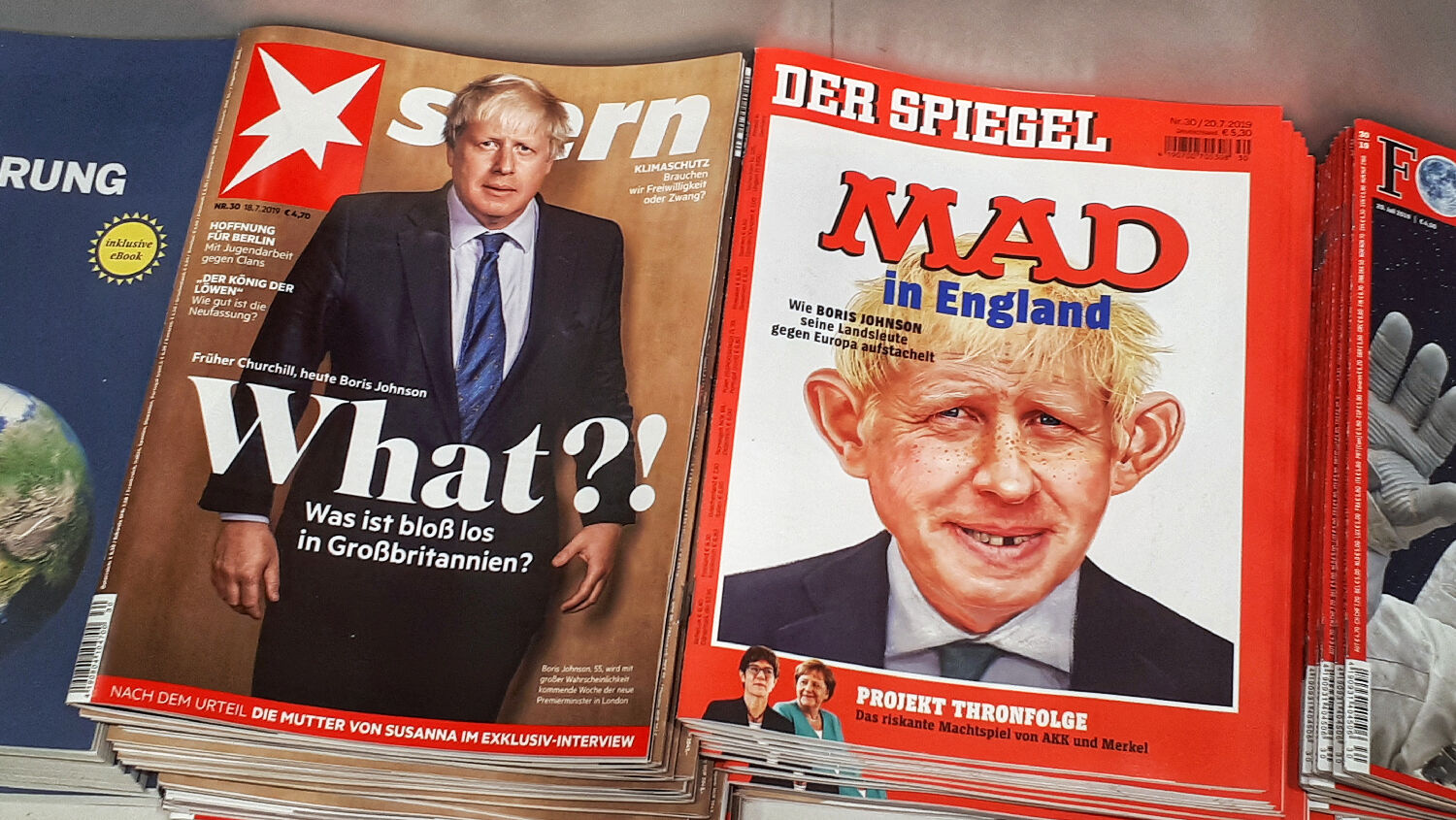 The arrival of Boris Johnson at Number 10 Downing Street has elicited plenty of jokes, chuckles and sneers in Europe.

The front cover of Der Spiegel depicted Britain’s new prime minister as Alfred E. Neuman, the goofy fictitious character from the cover of Mad magazine. Stern showed a photo of Mr. Johnson with the headline “What?! Britain, what’s going on with you?” Frankfurter Allgemeine Zeitung dismissed Mr. Johnson as “the clown who wanted to be king of the world.” Libération, the left-wing French daily, called Mr. Johnson the Queen’s court jester, as well as an egocentric liar. Politico wrote, “After years of laughing at him, Europeans simply don’t take Johnson seriously. At this state, it’s difficult to imagine what could change their minds.”

Actually, it is easy to imagine what could change Europeans’ minds regarding Boris Johnson. You can describe it in one word: Brexit.

Since he assumed office last Wednesday, Mr. Johnson has completely overhauled Britain’s approach to leaving the European Union. He has surrounded himself with serious Brexiteers, politicians who want to adhere to the democratic mandate and leave the EU. He has created committees dedicated solely to getting Brexit done. He has dispatched officials to Europe with hard-line messages. He has allocated buckets of money to generate positive publicity around Brexit. He has even installed a Brexit countdown clock at the Conservative Party headquarters in Westminster, and is reportedly having one installed in his personal office at Downing Street. For the first time ever there is a palpable, upbeat, optimistic, “can do” spirit coursing through the British government.

Does anyone doubt that Europe’s leaders have started to take Boris Johnson seriously? Brussels isn’t accustomed to such action and energy from Britain or its mainstream leaders.

The Spectator’s James Forsyth wrote an article today titled “Who’ll Blink First—Boris Johnson or the EU?” He explained how serious Britain’s prime minister is about Brexit, even if it requires a “no deal” departure, and how tension is growing between Britain and the EU.

“There is an intensity to these preparations that was not there before,” explained Forsyth. “When Dominic Cummings [the architect of Vote Leave, now a top adviser to Mr. Johnson] met with special advisers at 6 p.m. last Friday, he apologized that the meeting was taking place at that time (many in Whitehall have become used to ‘working from home’ on a Friday or at least scooting off early). Cummings then offered to move the meetings to a Saturday or a Sunday if that was more convenient.”

Invited to Germany, France and Belgium for meetings about Brexit, Boris Johnson told his European counterparts that he wouldn’t visit until the EU showed itself willing to compromise on the Irish backstop. Yesterday he dispatched David Frost, his chief Europe adviser, to Brussels to deliver the message that Britain is leaving the EU on October 31 “whatever the circumstances”—with or without a deal.

Johnson has made it absolutely clear to Europe that he is prepared to implement a no-deal Brexit. In the Sunday Times last weekend, Michael Gove, an ardent Brexiteer and top-level minister in Mr. Johnson’s government, wrote that the “entire machinery of government will work flat-out” on Brexit. “Planning for a no-deal is now this government’s No. 1 priority,” he wrote.

On Sunday, the prime minister announced the creation of a new Exit Strategy Committee that will focus solely on preparing for a no-deal Brexit. The committee will meet twice a week and will consist of six top governmental leaders, including the prime minister himself, as well as Chancellor of the Exchequer Sajid Javid, Foreign Secretary Dominic Raab and Chancellor of the Duchy of Lancaster Michael Gove. He also announced the creation of the Daily Operations Committee, which will meet every weekday to implement decisions made by the Exit Strategy Committee.

“It will soon be clear to Jean-Claude Juncker and the other main players on the EU side that the government really is taking take no-deal planning seriously in a way that it never has before,” wrote Forsyth.

Johnson is the antithesis of his predecessor. Where Theresa May was disinterested, disingenuous and disgraceful, Mr. Johnson appears engaged, energetic and earnest. EU leaders have never had to deal with a British prime minister quite like him. They might laugh and mock, but behind the chortling, there is surely some anxiety and dread.

Prime Minister Johnson has “acted with decisiveness and his government has a clarity about its aim that stands in stark contrast to the May ministry,” wrote Forsyth. “If this government can maintain its current pace and intensity, it will at least force the EU to decide whether it is prepared to compromise with Johnson to avoid no deal.”

“Force the EU” is not something Theresa May ever really did. With Mr. Johnson, Europe will be pushed, prodded, probed, poked and piqued.

The next few weeks and months will see momentous, perhaps historic, change in Britain, especially concerning its relationship with Europe. For months, even years now, Britain’s divorce negotiations with the EU have been paralyzed, stuck in a debilitating quagmire of bureaucracy, legal convolutions and simple lethargy. Not anymore.

Will Europe concede ground and work sensibly with Mr. Johnson? Will it become vindictive and attempt to inflict pain on Britain? If the EU plays dirty, how will the prime minister respond? Can an agreement be secured that will allow both sides to dwell side by side peacefully? Are Britain and the EU destined to become archenemies? We don’t know the details, but two things are certain.

First, Britain is moving on from the Brexit-induced paralysis of the past three years—one way or the other. If it leaves the EU by the October 31 deadline, then its relationship with the Continent will change profoundly, affecting the British at every level. If it does not leave, then even Boris Johnson will have failed and the British public will wallop the Conservative Party into oblivion. With democracy broken and Jeremy Corbyn as the likely prime minister, British politics would enter dangerous, uncharted territory.

Second, Britain is better positioned than ever to fulfill biblical prophecy in a stunning and inspiring way. The Bible has a lot to say about Britain in the end time. The book of Hosea, for example, prophesies that Britain will have a love-hate relationship with Germany (and Europe), but will fall in the end time to a German-dominated federal European power. It’s not hard to see the seeds of this future event in Brexit.

Another prophecy, this one in Amos 7 and 2 Kings 14, forecasts that the end-time nations of ancient Israel (America and Britain) will experience a national resurgence, one final moment of prosperity and power. After this brief renaissance, these nations will be overpowered by enemies and fall into captivity. It doesn’t take much imagination to see a short-lived resurgence under Mr. Johnson followed by a precipitous fall (initiated by Germany and Europe, likely in response to Brexit).

Whatever happens over the next few weeks and months, there can be no doubt: Britain under Boris Johnson is entering a sensational new epoch.