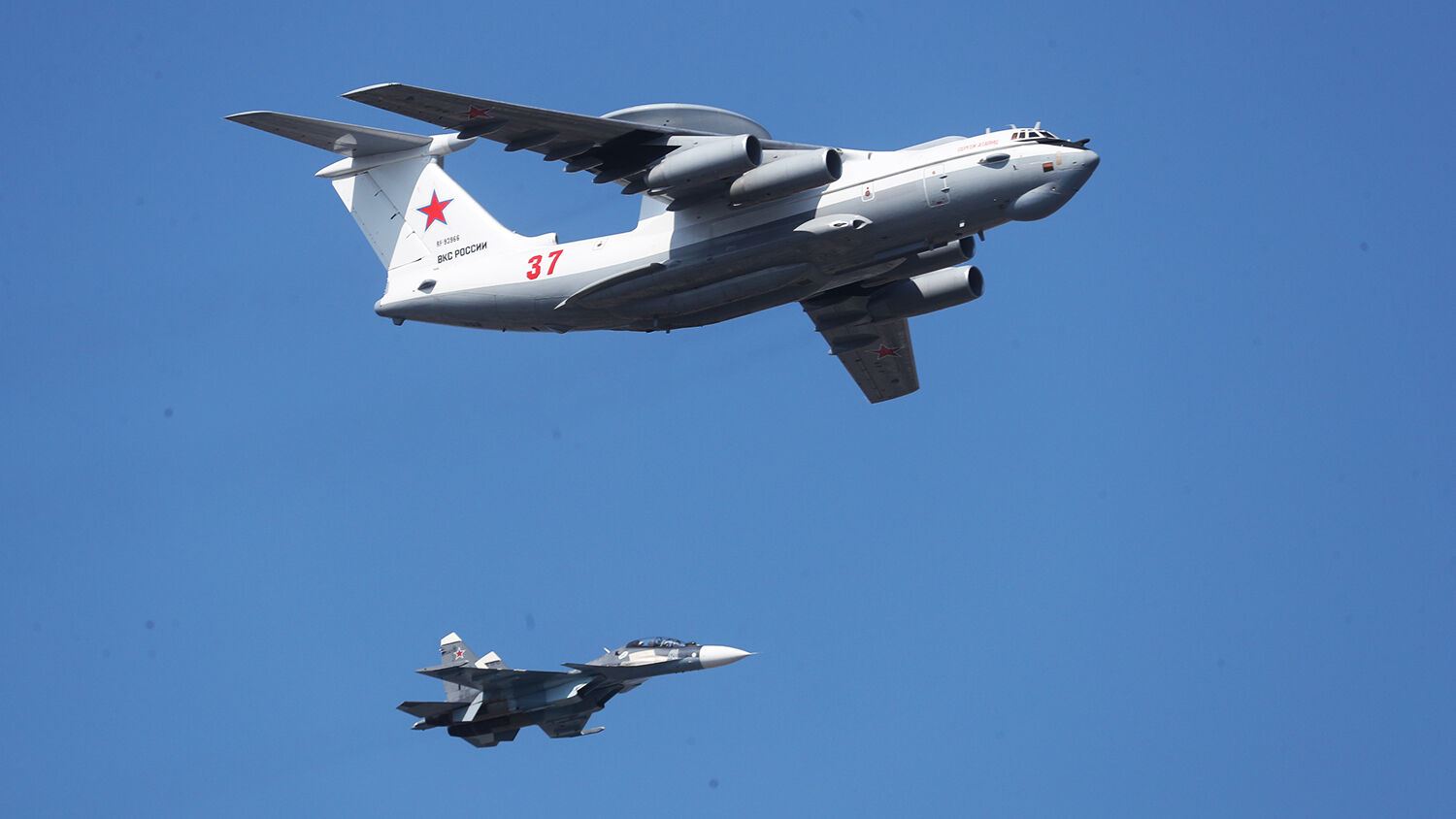 A Beriev A-50 airborne early warning and control training aircraft and a jet fighter rehearse for the Russian Navy Day Parade on the Neva River.
Alexander Demianchuk/TASS/Getty Images

On July 23, Russian and Chinese military aircraft joined forces to patrol territory disputed by other Asian nations, demonstrating that both Russia and China value their partnership above other interests in the region. Russia and China’s aim to play “a significant role in maintaining global strategic stability” as part of a comprehensive partnership has entered a “new era,” according to China’s July 24 defense paper.

A Russian Beriev A-50 airborne early warning and control aircraft, two Russian strategic bombers, two Chinese H-6K long-range bombers and a KJ-2000 battle-space-management aircraft patrolled the Sea of Japan. During the patrol, Russia’s A-50 flew close to Korean-controlled islands, whose sovereignty is also contested by Japan. South Korea deployed jets and fired warning rounds at the Russian aircraft as it passed by. South Korea claims to have attempted radio contact before resorting to more forceful warnings. According to South Korea, the Russian aircraft entered its self-declared air defense identification zone, but Russia said that this zone is not bound by international law and therefore denies that it violated airspace.

South Korea reported that the Russian aircraft took an obviously antagonistic loop around the disputed islands. Japan also responded, sending fighters to escort the aircraft 11 times over the duration of the patrol.

What the world saw on July 23 fulfilled statements released the next day by the Chinese Communist Party in its national defense paper. It stated that Russia and China must continue their “sound development of exchange mechanisms at all levels; expanded cooperation in high-level exchanges, military training, equipment, technology and counterterrorism; and realized positive interaction and coordination on international and multilateral occasions.”

In response to the joint patrol, Russia Matters wrote, “Moscow is signaling a growing and increasingly institutionalized military relationship with China, reminding its neighbors in Asia that it is a military power in the region whose interests should be considered.”

With the joint bomber patrol, Moscow has taken a small but publicly visible next step in signaling that, beyond mere words, it is willing to put skin in the game and accept more political cost on behalf of its relationship with China. … [I]t is an important signal to China that Russia values its relationship with Beijing sufficiently to irk other regional actors.

Russia’s Defense Ministry wrote that the patrol had the “aim of deepening Russian-Chinese relations within our all-encompassing partnership, of further increasing cooperation between our armed forces and perfecting their capabilities to carry out joint actions, and of strengthening global strategic security.”

Though frequently dismissed in the United States, the case for a more tangible alignment between Russia and China grows stronger every year. Whether it will rise to the level of an entente or even alliance remains in question, but the current trajectory takes this relationship well beyond a mere “alignment of convenience,” as it is at times described, or perhaps dismissed. One of the signs of a strengthening alignment is when both sides take actions that are decidedly inconvenient for their other interests or relationships, particularly in the region, and show willingness to take some risk on behalf of their cooperation. Perhaps some years into the future analysts will look back on joint Russian-Chinese bomber patrols, and the upcoming military agreement, and see them as one of the more visible milestones in the countries’ relationship.

Gen. Charles Q. Brown, commander of U.S. Pacific Air Forces, expressed his concern for this increased cooperation, saying that Russia’s and China’s actions are “a potential harbinger of things that could happen in the future.”

Both Russia Matters and General Brown are far more accurate in their analysis of Russia and China’s joint patrol than they realize. This increased collaboration is a “harbinger” of more than an “alignment of convenience.” But contrary to what Russia Matters wrote, you do not have to wait for future analysts to look back and see the importance of these events. You can know exactly where this collaboration is heading with an honest and informed understanding of Bible prophecy.

The Trumpet has been watching increasing collaboration between Russia and China for decades. Our booklet Russia and China in Prophecy, first published in 1991, begins with this bold warning, “In the next few years, there will be a staggering turn in world events! A giant Asian superpower, with a modernized Russia and China at the helm, will dramatically affect the course of history.”

These statements are based on Bible prophecies.

This is where joint military missions between Russia and China are leading. We do not need to be caught off guard by these events.

For more comprehensive proof of the identity of the kings of the east (Revelation 16:12), and to understand their role in end-time events, please request a free copy of Russia and China in Prophecy. This growing alliance is a formidable force in world events—but understanding what the Bible says about it shows that this is part of a plan overseen by a loving God.