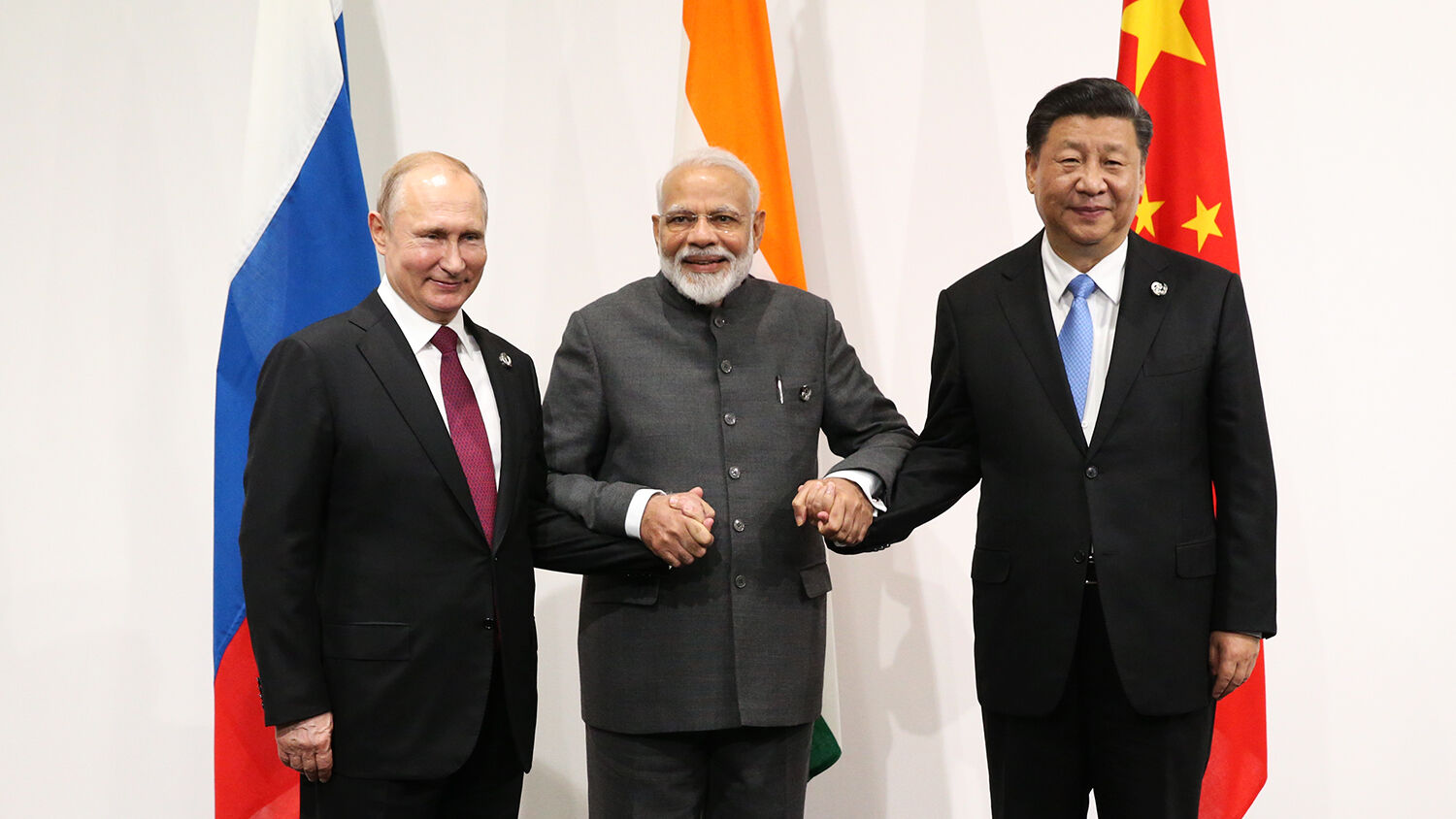 (From left) Russian President Putin, Indian Prime Minister Modi and Chinese President Xi pose for a group photo on June 28 prior to their trilateral meeting at the G-20 Osaka Summit 2019.
Mikhail Svetlov/Getty Images

Are we on ‘the precipice of monumental change’?

On the sidelines of the G-20 summit in Japan, a trilateral meeting was held between Russia, India and China. The June 28 meeting is a milestone in the creation of a new, world-changing alliance.

Meeting for a second year in a row, following a 12-year break, the cooperation highlights the East’s increasing reliance on those in its own sphere and less on the Western world—especially the United States.

The South China Morning Post quoted Chinese President Xi Jinping saying, “China, Russia and India should take on global responsibility to safeguard the fundamental and long-term interests of these three countries and the world.” These words are remarkably similar to the language that has been used in the six meetings that Russian President Vladimir Putin has had with Xi in the past two months.

These nations are preparing to step up in what they consider a failing Western order.

The RIC (Russia-India-China) meeting was an excellent forum to discuss ways to enhance multilateral cooperation between our nations and work to mitigate challenges being faced by our planet, most notably terrorism and climate change. pic.twitter.com/LTljcPCTDW

Following the meeting, the Diplomat reported that Putin said Russia, India and China are “laying the groundwork for equal and indivisible security architecture in Eurasia.” According to the Diplomat, this type of language shows the importance that needs to be placed on meetings between these three leading powers in the East, writing that “we appear to be on the precipice of monumental change with regard to the post-Cold War status quo.”

Director general of the Chinese Foreign Ministry’s Asian Affairs Department, Wu Jianghao, said the meeting laid a framework for future cooperation between the three countries. This increasing cooperation is only adding to U.S. worries that India is switching from the West’s camp and embracing Eastern powerhouses Russia and China.

All three nations have disputes with the U.S. The U.S. imposed tariffs on Indian goods after New Delhi bought S-400 air defense systems from Russia, China’s trade war with the U.S. just passed the one-year mark, and Russia is still burdened under numerous U.S. sanctions imposed after its 2014 annexation of Crimea.

Consequently, the three have already planned their next meeting. In September, they will meet at the Eastern Economic Forum in Vladivostok, Russia, where Indian Prime Minister Narendra Modi will be Putin’s guest of honor. There is certain to be many more future meetings between the three leaders.

This growing relationship is directly fulfilling Bible prophecy. Right now, groundwork is being laid to form the end-time power bloc that Revelation 16:12 labels “the kings of the east.”

The identity of some of the nations that will comprise this alliance can be found in Ezekiel 38: “Son of man, set your face against Gog, of the land of Magog, the prince of Rosh, Meshech, and Tubal, and prophesy against him, and say, ‘Thus says the Lord God: “Behold, I am against you, O Gog, the prince of Rosh, Meshech, and Tubal”‘” (verses 2-3; New King James Version).

In April 1981, late educator Herbert W. Armstrong wrote in the Plain Truth, “There is general agreement among students of prophecy that ‘Gog’ in the land of ‘Magog’ is the vast regions of northern Eurasia extending from the Baltic to the Pacific. ‘Meshech’ is Moscow, ‘Tubal’ is Tobolsk. The Bible margin says ‘Prince of Rosh,’ which is Russia.”

Our free booklet Russia and China in Prophecy explains, “In his book Compendium of World History, Dr. Herman Hoeh correctly identified Meshech and Tubal as fathers of those who comprise greater Russia today. Magog fathered the people of China ….”

The Bible clearly states that both Russia and China will lead this kings of the east alliance. But what about India?

Ezekiel 38:5 says, “Persia, Ethiopia, and Libya with them ….” Russia and China in Prophecy continues, “Ethiopia and Libya should be translated ‘Cush’ and ‘Phut.’ Although portions of the tribes of Cush and Phut migrated to African nations, the rest settled in areas of India. The context of this passage shows that it refers to modern-day Indians (and perhaps Pakistanis) rather than to the African peoples. … India—with its population of more than 1.2 billion people—is almost certain to join the Asian bloc that is prophesied to congeal in the end time.”

These three nations are prophesied to join with other Asian nations to form this end-time kings of the east alliance. We watch meetings, such as the G-20 trilateral, so closely because they are leading to the fulfillment of Bible prophecy, culminating in the Second Coming of Jesus Christ.

For thorough proof of the identity of the nations that will comprise the kings of the east alliance and to understand its role in Bible prophecy, please read our free booklet Russia and China in Prophecy.