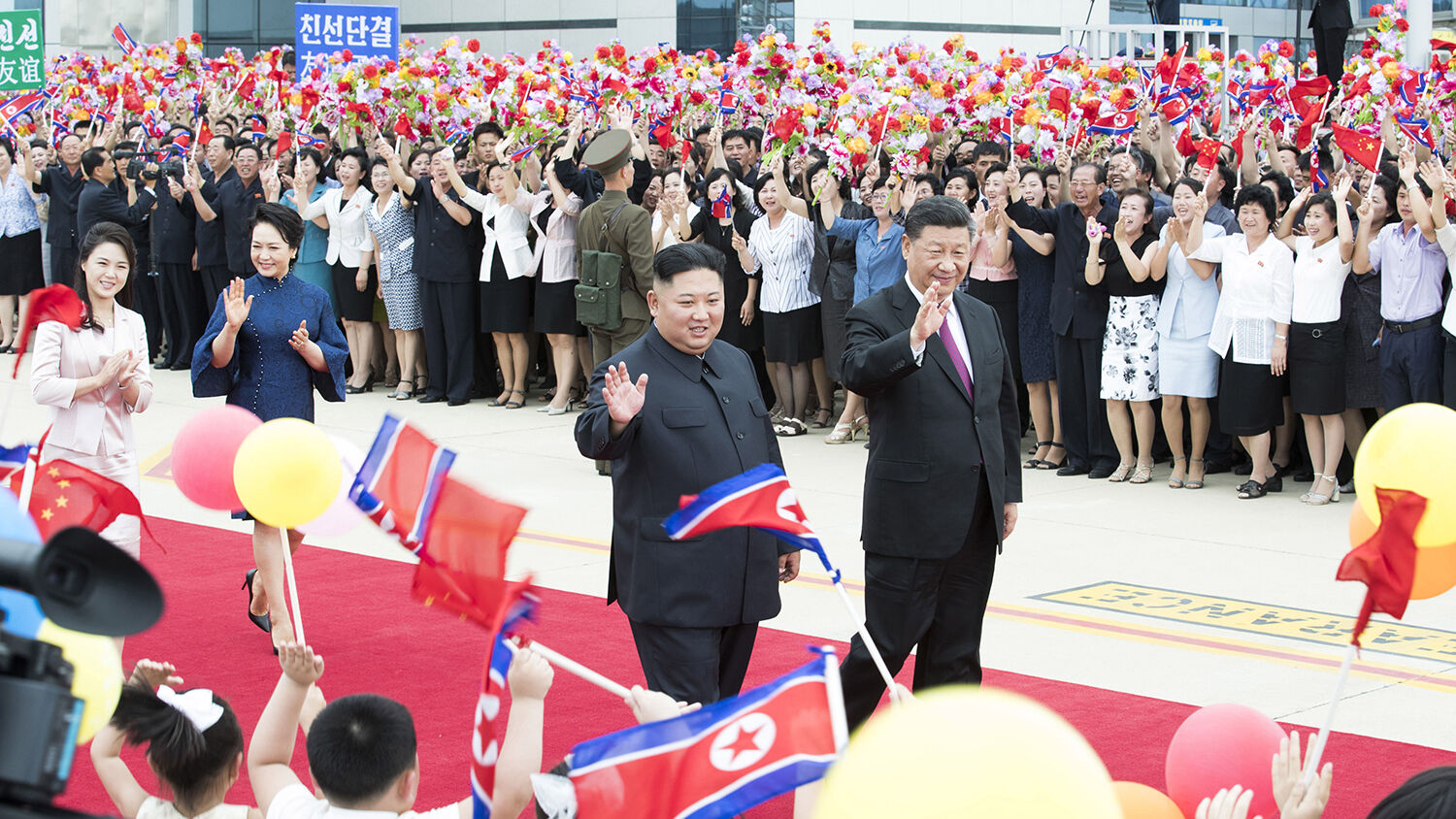 Chinese President Xi Jinping and his wife, Peng Liyuan, attend a send-off ceremony by North Korea leader Kim Jong-un and his wife, Ri Sol Ju, ahead of their departure from Pyongyang on June 21.
Getty Images

This deepening relationship reveals who the real threats are.

Chinese President Xi Jinping visited North Korean Supreme Leader Kim Jong-un in an official state visit from June 20–21. This marks the first time in 14 years that a Chinese leader has visited North Korea. While the official purpose of the visit was to celebrate the 70th anniversary of China-North Korea relations, the pair came together united against American President Donald Trump.

As North Korea’s only major ally, China’s Xi was treated to a spectacular, red-carpet welcome when he arrived at Pyongyang airport last Thursday. Xi was greeted by thousands of North Koreans waving flowers and he received a 21-gun salute.

As Xi and Kim rode together in an open top vehicle, they waved to 250,000 citizens who lined the streets all the way to the Kumsusan Palace of the Sun.

Later that evening, the pair attended a banquet before watching a massive propaganda performance, Undefeated Socialism. The evening included a performance of the song “I Love Thee, China” and thousands of placards flipped to form a giant picture of Xi and the Chinese flag.

A humongous crowd performed calisthenics in unison at the May Day Stadium in Pyongyang, #NorthKorea on June 20, to welcome Chinese President #XiJinping, who is on a state visit to DPRK. #XiVisit pic.twitter.com/0jcV4jVzEE

State media throughout North Korea dedicated extensive coverage to Xi’s visit. Rodong Sinmun wrote, “Comrade Xi Jinping is visiting our country in the face of crucial and grave tasks due to complex international relations, which clearly shows that the Chinese party and the government place high significance on the friendship between the two countries.” He went on to say, “The friendship between North Korea and China is unbreakable.”

Along with the spectacular display of friendship between Xi and Kim, the meeting was clearly aimed at the tightening disputes with the U.S.

Xi will meet President Trump this weekend on the sidelines of the G-20 summit, in hopes of making progress toward an agreement over their extended trade war. At the same time, Kim hopes that the U.S. will meet him “halfway” after failed talks in February put denuclearization in exchange for sanctions relief on hold.

Xi may see this trip as especially necessary after an embarrassing few weeks of protests in Hong Kong and an opportunity to boost his reputation on a major global issue. The Wall Street Journal called Xi’s visit “a high-profile trip arranged to flex Beijing’s role as a pacifying force.”

One of the roles Xi wishes to play as a “pacifying force” is in facilitating continued denuclearization negotiations between Kim and Trump.

During discussions with Xi, Kim indicated that he would be willing to compromise on the stalled nuclear talks with the U.S. In return, Xi promised to ensure North Korea’s security and development. China is North Korea’s largest trading partner, accounting for about 90 percent of North Korea’s trade. Because of this, the U.S. has also recognized that China could play a major role in ensuring that talks between the U.S. and North Korea continue, while boosting China’s own position in a potential trade deal.

Several have even suggested that Xi could pass on a message from Kim to Trump regarding denuclearization negotiations at their meeting in Japan this weekend. However, no specifics on the stalled negotiations were given during the meeting between Xi and Kim.

The heightened relationship between North Korea and China goes beyond denuclearization. The Korean Central News Agency reported that the pair agreed on the need to deepen their relationship with “mutual interest of the two countries in face of serious and complicated changes in the environment and would be favorable for the region’s peace, stability and development.” While the news agency did not name the U.S. directly in its statement, the reference was clear.

The Wall Street Journal recognized this fact, writing: “By demonstrating unity in their alliance, Beijing and Pyongyang can help bolster each other’s bargaining positions against Washington.”

Wang Sheng, a professor at Jilin University in northeastern China, told the Wall Street Journal that “President Xi’s visit highlights the crucial role that China plays in resolving the Korean Peninsula nuclear issue” and could “be beneficial for the China-U.S. relationship.”

The only reason that North Korea can act as it does, with such a belligerent foreign policy, is because of the support it receives from Russia and China.

A prime example of this occurred immediately before Xi visited North Korea. A declaration supported by the U.S. and 25 other countries was presented to the UN. It was based on overwhelming evidence that North Korea exceeded its cap on imported refined petroleum in 2018 and is on track to do so again this year. The cap limits the country to 500,000 barrels per year, but in 2018 it brought in approximately seven times that amount.

The oil limit is designed to put pressure on North Korea’s economy and military, thereby making the nation more likely to come to the negotiating table regarding its nuclear weapons program.

Russia and China used their veto power to block the UN declaration, effectively making it very difficult for the U.S. to bring North Korea to negotiations that will bring it to give up its nuclear weapons program.

“The advantage that China possesses over the U.S. in allying with Kim is the similarity in political ideology,” James Downes, a lecturer at the Chinese University of Hong Kong, said. “Kim eventually must side with one of the superpowers. … In short, the relationship between China and North Korea is likely to remain strong in the near future.”

Like Downes says, China and North Korea are likely to maintain a strong relationship. We can know this because Bible prophecy says as much.

End-time prophecies discuss several power blocs that will rise in these last days. One of these blocs is “the kings of the east” (Revelation 16:12). In his October 2017 article, Trumpet editor in chief Gerald Flurry wrote about North Korea’s role in this Eastern alliance:

North Korea will almost certainly be assimilated into the “kings of the east” power bloc, which is prophesied to play a major role in World War iii. This bloc will be led by Russia, with China in a secondary leadership position. Many other Asian nations, likely including North Korea, will be aligned with it (see Ezekiel 38:5-6). This means that all the missiles and nuclear technology that the Kim dynasty has been developing over the years will contribute to the unprecedented devastation to occur during the prophesied third world war.

North Korea is a danger that we cannot ignore, but we cannot let it distract us from the bigger threat—Russia and China. They are prophesied to lead this end-time power bloc that will field an army of 200 million men (Revelation 9:16). This is the power to watch for. Russia and China are reaching out to North Korea to bring it into their orbit. By leading North Korea, they can dictate the use of its nukes and use it as leverage against the rest of the world.

Watch the kings of the east alliance form as Russia and China increasingly bring other Asian nations into their orbit. Specifically watch China and North Korea as they cozy up in the face of Donald Trump. For more information on the kings of the east and the prophesied identity of the nations destined to be part of this alliance, please read Russia and China in Prophecy.