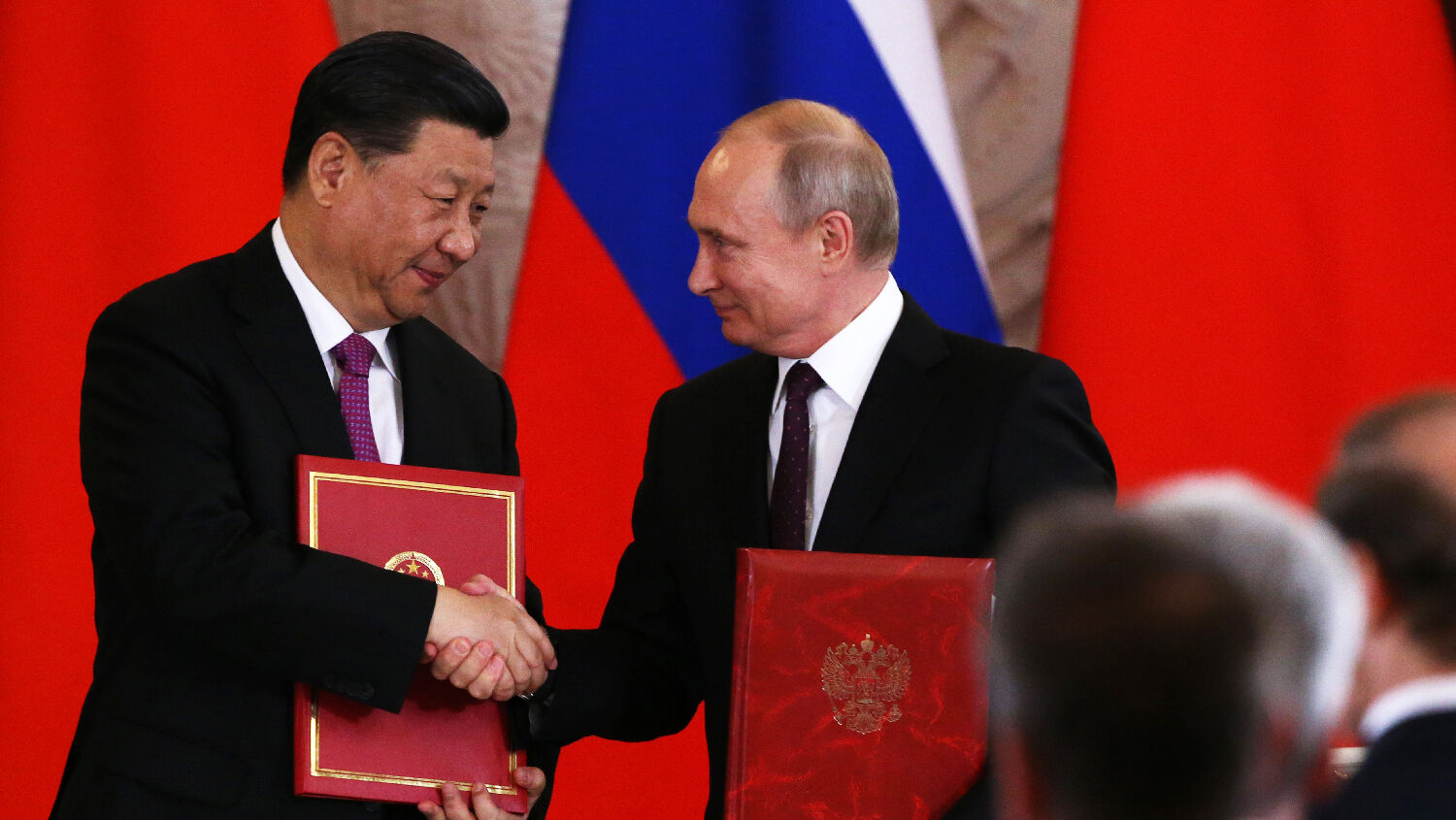 Global tensions are bringing their relationship to ‘an unprecedentedly high level.’

Russia and China’s relationship entered a new era following a June 5–7 summit between Russian President Vladimir Putin and Chinese President Xi Jinping. The pair announced that they had entered a new era and upgraded their relationship to a “comprehensive strategic partnership of coordination” during Xi’s three-day visit to Moscow that coincided with the 70th anniversary of relations between the two countries. The events of the visit stood starkly against the backdrop of the U.S.-China trade war.

The two leaders have now met nearly 30 times, with this recent meeting bringing the nations closer than ever. “We have the confidence and capability to bring our relations to a new era of greater development at a higher level, based on our experience and achievements of the past 70 years,” Xi said.

During the meetings, the two signed $22 billion worth of manufacturing, energy, technology and other deals. The two leaders also attended the International Economic Forum in St. Petersburg; Xi was the guest of honor. Approximately 1,000 representatives from China also attended the event.

At the forum, in back-to-back speeches, the leaders of Russia and China “cast themselves as the champions of free markets and global trade, an overt show of opposition to what they portrayed as the United States’ retreat into protectionism with sanctions and tariffs,” wrote the New York Times.

Xi spoke about China’s strong support for globalization and open borders to produce a “harmonious world,” while Putin hinted that trade wars could become real wars. He indicated that the U.S. was “pretending” to promote free markets, but the reality of this facade had been revealed with the threat of economic competitors. The pair emphasized strong Russia-China ties in the face of worsening ties with the U.S.—a recurring theme throughout the three-day visit.

The two leaders ratified a 10,000-word document after the first round of meetings, specifying 16 potential areas for cooperation. Almost half of this document was dedicated to their united approach toward several international crises.

“We confirmed that Russia’s and China’s stances on key global issues are similar or coincide,” Putin said, according to Russia’s tass news agency. “We stated that they had reached a very high—and without any exaggeration—an unprecedentedly high level.”

He pointed out that Russia and China see eye-to-eye on Iran, Venezuela, Syria, North Korea and the Arctic. Together they are committed to full implementation of the Iran nuclear deal and a peaceful settlement to the Syrian crisis. The Chinese president pledged to play a “constructive role” in returning Venezuela to normal development, but stressed that this should not be done through foreign interference or sanctions.

In a second joint statement covering the challenges of and response to international security, Xi and Putin directly called out the U.S. 10 times. Both leaders saw this meeting as vital to shoring up their relations in the face of increased U.S. pressure—China over the trade war and Russia over U.S. sanctions.

“China’s announcement that its ties with Russia have entered a new era … are all set against the background of unprecedented tensions between the U.S. and China, and the lasting confrontation between Russia and the U.S.,” Shi Yinhong, U.S. specialist at Renmin University in Beijing, said. “There is a major strategic need to strengthen the ties between Russia and China … and China will continue to team up with Russia against the U.S. on international issues.”

With Russia’s help, China can endure its trade war with the U.S. much longer than it could otherwise. The trade war is definitely having an impact on China, but in several areas, Russia is stepping up to fill the gap. The trade war is driving China from reliance on U.S. customers and toward Russia.

One area that Russia is stepping up to provide for China is agriculture. In 2018, agricultural and food trade between the two rose 30 percent, while overall trade reached a record $108 billion, nearly 25 percent higher than the previous year. They aim to increase this to $200 billion by 2020.

Filling the gap left by the U.S. is Russia’s largest meat producer: Cherkizovo Group. It started delivering poultry products to China in May and also plans to export pork and soybeans. This comes after China applied retaliatory tariffs on U.S. pork and chicken in May and also stopped its soybean imports.

The two sides also plan to increasingly trade in their own currencies to reduce their reliance on the U.S. dollar. Russia has expressed a desire to start selling yuan bonds to deepen economic relations with China. More than 15 Russian companies and banks have expressed interest in buying yuan bonds on the Moscow Exchange and on Chinese exchanges.

The two countries are continuing their plans to establish a new system for direct yuan-ruble payments. Currently, 14 percent of trade between the two countries is conducted in yuan, and 7 to 8 percent is conducted in rubles. Russia’s central bank has also been working to replace the U.S. dollar with yuan on its foreign exchange reserves portfolio. In the second quarter of 2018, Russia bought $44 billion in yuan currency and sold about $100 billion. In mid-2018, Russia’s yuan holdings comprised 15 percent of its international reserves.

Putin emphasized that trading in rubles and yuan was with the goal to develop “failsafe bank servicing of transactions in conditions of instability on global markets.”

Arguably one of the biggest developments to come out of Xi’s visit to Russia was a deal signed between China’s Huawei and Russia’s mts telecommunications company. Huawei will work with mts over the next year to build a 5G network in Russia. mts said that this deal will bring “the development of 5G technologies and the pilot launch of fifth-generation networks in 2019–2020.”

This deal comes at a pivotal time for Huawei. In May, President Trump banned U.S. companies from selling equipment to Huawei and advised other countries to do the same due to claims that the company is involved in spying for China’s ruling Communist party. The U.S. ban is due to come into force within three months, and many companies have already distanced themselves from Huawei.

Although the U.S. has claimed that Huawei is a security threat, this does not seem to have deterred Russia. Russia’s cooperation with Huawei, along with several other nations who have shunned the U.S. ban, is ensuring the company’s survival.

With all these developments, the intimacy of China-Russia relations is undeniable. “President Putin is the foreign colleague that I have interacted with most extensively,” Xi said. “He is my best friend, and I greatly treasure our friendship.”

The recent summit is a stark reminder of where we are heading in Bible prophecy. Russia and China’s treasured friendship is just the beginning of the fulfillment of a specific end-time prophecy. Their close relationship was prophesied, and it will only lead to much greater cooperation.

In Revelation 16:12, God identifies an end-time military alliance called “the kings of the east.” The identity of those nations forming this alliance is recorded in Ezekiel 38, and it will be led by Russia and China! With Russia at the head, and China in a secondary leadership position, they will lead a combine of Asian nations amassing a combined army of 200 million men! (Revelation 9:16). (To prove the identity of these nations, please read Chapter 1 of our free booklet Russia and China in Prophecy.)

Through this latest round of meetings and their ever increasing cooperation, Russia and China are preparing to lead this fearful alliance. And their goal? World conquest.

In the December 1962 Plain Truth, predecessor to the Trumpet, editor in chief Herbert W. Armstrong wrote: “The petty jealousies between Moscow and [Beijing] are not deterring either from their joint goal: world conquest. This is all part of the great Communist plan enunciated by Lenin 30 years ago.”

He also emphasized the deepening divide away from America that would drive Asia together. “The Asiatic mind is totally different from the occidental [Western] mind. It doesn’t reason in the same manner,” he wrote in 1961. The people of Asia “are impressed with strength, not talk. They feel a much closer kinship with other peoples of the Asian sphere than they do with the far-away ‘Yankees’ with customs, languages and religions so totally different from their own.”

Since their opposition during the Cold War, we have seen increasing cooperation between Russia and China. And especially in recent years, this has been led by opposition to America. Sino-Russo relations are reaching “an unprecedentedly high level,” as President Putin said.

Watch for these two nations to continue to rise to dominance together. For more information on the growing ties between Russia and China and where it is leading, order your free copy of Russia and China in Prophecy.