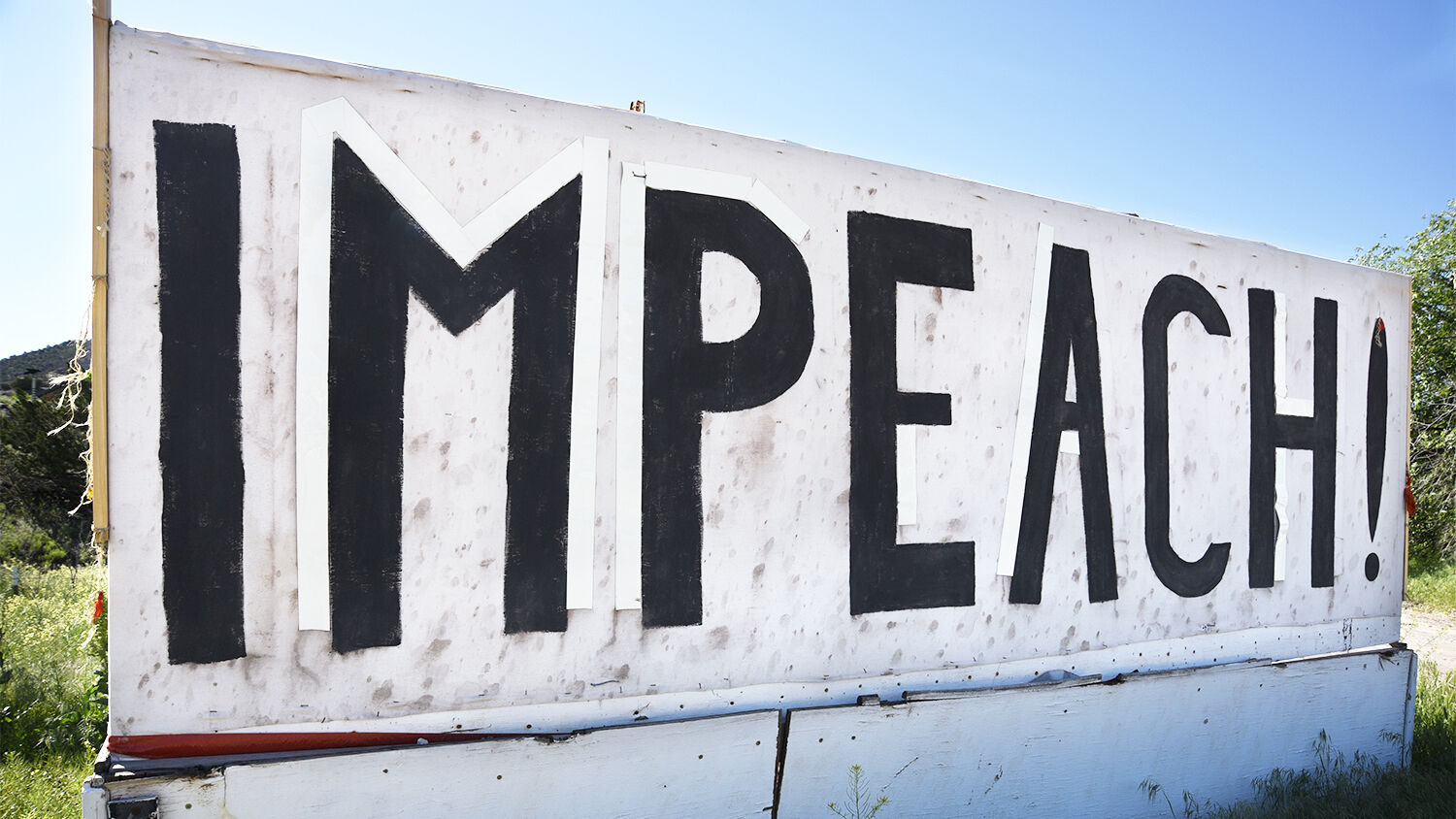 A large handmade sign along a highway in Velarde, New Mexico, on May 15 urges politicians to impeach President Donald Trump.
Robert Alexander/Getty Images

Department of Justice Special Counsel Robert Mueller held a press conference on May 29, breaking his silence regarding his report into alleged collusion between the 2016 presidential election campaign of Donald Trump and the government of Russia, and alleged obstruction of justice by the Trump administration.

“[I]f we had had confidence that the president clearly did not commit a crime we would have said so,” Mueller said. He also stated that Department of Justice guidelines prevented him from accusing a sitting president of a crime. Mueller was implying that he had evidence indicating that President Trump was guilty of a crime.

Speaking on the Trumpet Daily Radio Show program the next day, Trumpet executive editor Stephen Flurry called Mueller’s statements “a total inversion of justice, abuse of power, and miscarriage of justice.” He went on to say that Mueller’s statements, attempting to place blame on the president without any evidence, was just another attempt to cover up the real collusion that has been occurring since the 2016 elections.

Immediately after Mueller was appointed special counsel, he filled his investigative team with leftist Democratic prosecutors who hated Donald Trump. “It was all political from the very beginning,” Mr. Flurry said.

Mueller’s investigation into Trump’s election campaign and accusations of Russian involvement found insufficient evidence of obstruction of justice, according to his report released on April 18. However, six weeks later, Mueller implied that Trump was guilty.

“Think about what that rationale really means,” Gregg Jarrett at Fox News wrote. “It is a double negative. Mueller was contending that he can’t prove something didn’t happen. What if this were the standard for all criminal investigations? Apply it to yourself. Let’s say you deposited your paycheck at the bank on Monday, the same day it’s robbed. A prosecutor then announces publicly that he cannot prove you didn’t rob the bank, so you are neither criminally accused nor ‘exonerated.’ The burden of proof has now been shifted to you to disprove the negative. How would you feel? You’ve been maligned with the taint of criminality and no longer enjoy the presumption of innocence. This is the equivalent of what Mueller did to Trump. The special counsel created the impression that Trump might have engaged in wrongdoing because he could not prove otherwise.”

In the first half of Mueller’s report, investigators did find evidence of Russian meddling in the United States’ 2016 elections. Indictments were handed down to these Russians. Mueller said about them: “These indictments contain allegations, that we are not commenting on the guilt or innocence of any specific defendant. Every defendant is presumed innocent unless and until proven guilty.”

One standard for the Russians, but a very different one for Donald Trump.

Sean Davis at the Federalist wrote, “According to Mueller and his team, charged Russians are presumed innocent. An American president, however, is presumed guilty unless and until Mueller’s team determines he is innocent.”

And once again, the news media has run with the verdict it wanted: Trump is guilty. They will accept nothing less.

Alan Dershowitz, a well-known left-wing defense attorney and academic, told Fox News that Mueller’s comments were essentially him putting “his elbow on the scale. [I]t does show that he had a motive to help the Democrats here. There is no other possible motive why he would have gone out of his way to say that. … It also showed we never should have had a special counsel. We should have had an objective, neutral, non-partisan investigative commission looking into the entire effort of Russia to intrude itself into the ’16 election and continuing to the ’20 election and proposing efforts to ameliorate that in the future. A special counsel was a terrible, terrible mistake, and I think Mueller’s statement today proves that without a doubt.”

It appears that the Democrats knew what was coming in this “surprise” conveniently timed press conference while Attorney General William Barr was in Alaska. Soon after Mueller’s comments, Jerrold Nadler rushed to the microphone with a prepared statement.

“No one is above the law, and we will hold the president accountable,” he said.

And by holding the president “accountable,” he means impeachment.

Left-wing former director of the Central Intelligence Agency, John Brennan, told left-wing msnbc, “I think Bob Mueller’s public statement today is going to give momentum to those who want to move forward with impeachment hearings.”

Mr. Flurry said that this was Mueller and the Democrats working a deal. “There was some collusion going into yesterday’s news conference,” he said, pointing to the fact that Barr was out of town and Mueller declined the opportunity to testify. They were plotting their next actions against Trump, asking themselves how they could “continue on with this witch hunt, this hoax, this coup attempt. Now we know the answer. And the Democrats, as you heard from Jerrold Nadler, and the former Obama officials, the media, they took the baton and now they are running with it,” Mr. Flurry continued.

This spectacle in U.S. politics is the result of unseen forces spreading throughout the world. There is a spirit force that is driving these people to do whatever it takes to take down the president. Trumpet editor in chief Gerald Flurry writes about this in his booklet America Under Attack:

We live in a time unlike any other in history. World events are moving rapidly toward the end of this age. There is an unseen reason why troubles are intensifying as never before. You cannot understand events without recognizing this truth.

An event occurred in 1986 that marked a major turning point in history. It has radically altered everything that has happened since: culture, family, education, religion, science, finance, politics, international relations—everything we do. Yet what is most remarkable is, almost no one even knows it happened.

It has affected the United States in a massive way. In fact, it marked a major escalation of a violent attack on America. It is an assault by an invisible force—a force that is very real and deadly dangerous. The Bible provides penetrating insight into this troubling trend. The Trumpet has written for years that America is prophesied to fall—hard—before it rises again. But it also gives extraordinary insight into how that fall will come about. This insight puts the seriousness and urgency of current events in their true perspective. …

Mr. Flurry then refers to the end-time prophecy in Revelation 12:9, which reads, “And the great dragon was cast out, that old serpent, called the Devil, and Satan, which deceiveth the whole world: he was cast out into the earth, and his angels were cast out with him.”

“The devil and millions of demons are now confined to this Earth,” Mr. Flurry writes. “They can no longer go out into the universe. That’s the first time that has ever happened!”

And we can see the results of their confinement on this Earth in U.S. politics. The spirit of Satan, a liar and a murderer from the beginning (John 8:44), is prevalent everywhere. This is what is behind the malicious attacks against President Trump. Satan and his demon army are working to bring down our nation, and the evidence of their success is all around us.