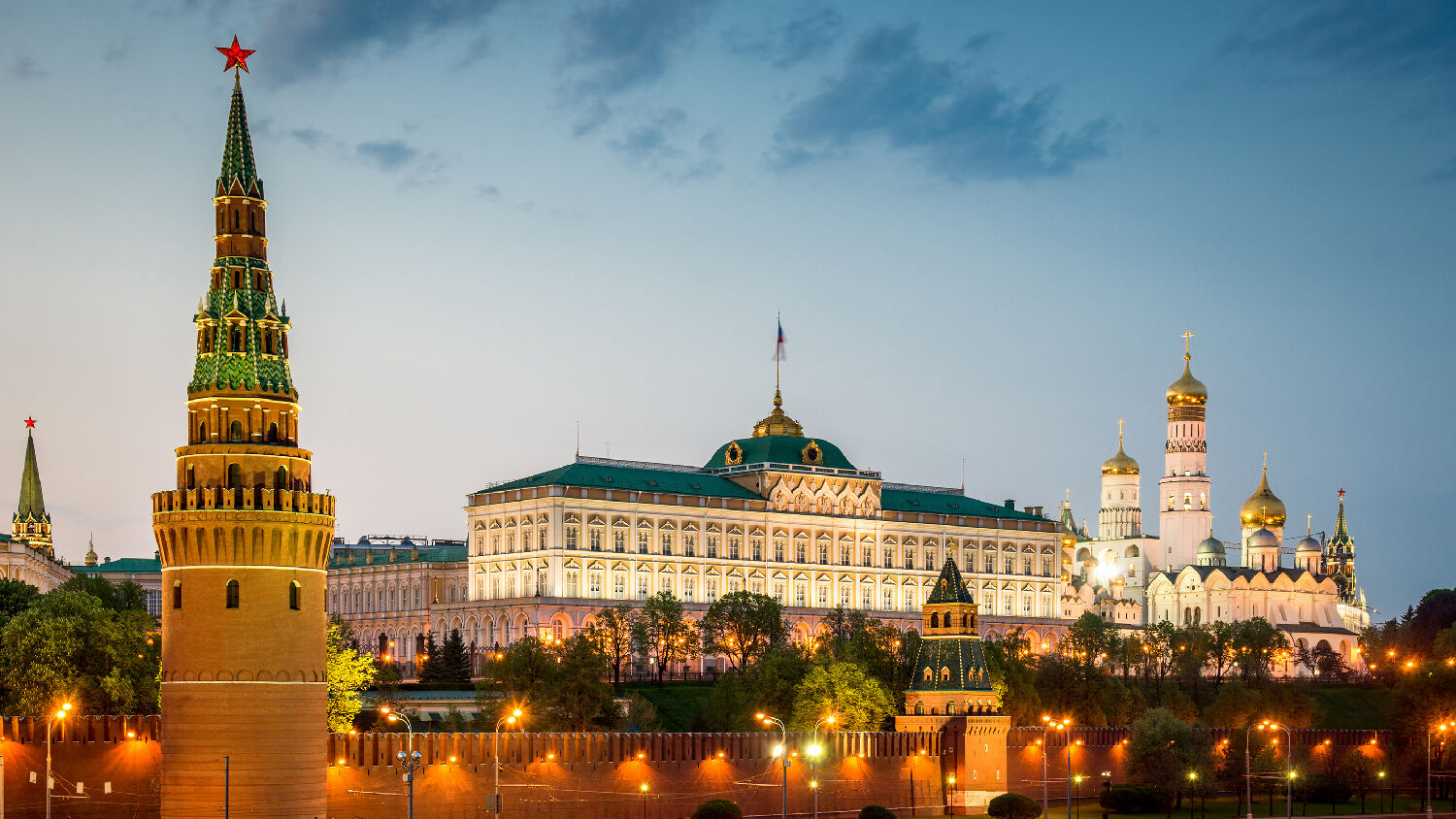 The Kremlin in Moscow, Russia.
iStock.com/Mlenny

Across the pond, Europe has its own Russia collusion scandal.

Across Europe, nations will be holding elections for the European Parliament from May 23 to 26. Polls indicate euroskeptic parties will do well, winning up to a third of the seats.

For months, European officials and pro-Europe mainstream public figures have been laying the groundwork for this excuse. Back in November, European Commissioner for Justice and Consumer Policy Vera Jourova warned the European Parliament about “allegations of dark financing from undisclosed third-country sources” and named Russia as the top culprit. In February, former nato Secretary General Anders Fogh Rasmussen and 14 other political leaders launched an initiative to combat Russian election meddling. On May 12, the New York Times reported that “a constellation of websites and social media accounts linked to Russia or far-right groups is spreading disinformation, encouraging discord and amplifying distrust in the centrist parties that have governed for decades.”

“European Union investigators, academics and advocacy groups say the new disinformation efforts share many of the same digital fingerprints or tactics used in previous Russian attacks,” the Times wrote, “including the Kremlin’s interference in the 2016 U.S. presidential campaign.”

Just today, Guy Verhofstadt, leader of the Alliance of Liberals and Democrats for Europe Group in the European Parliament wrote that euroskeptic parties “have essentially become a Russian fifth column within the European Union.”

The trouble is, there’s very little actual evidence of substantial Russian interference. “We are not seeing the automated, networked activity with an obvious Russian fingerprint across these elections,” said Sasha Havlicek, head of London’s Institute for Strategic Dialogue, according to a Washington Post article published this morning.

“European leaders commissioned reports about foreign meddling, enlisted intelligence services in efforts to be vigilant, and pushed social media companies to police their platforms,” noted the Post. “But the worst fears about Kremlin involvement have not manifested, officials and analysts said.”

But this hasn’t stopped the flood of hysterical articles.

I don’t deny that Russia tries to influence elections and spreads fake news. I’ve written on the subject myself, long before the mainstream press started paying attention. But if euroskeptic and other fringe parties do well this week, it won’t be because they received some dodgy donations from Russia or favorable press from RT.

As a mainstream pro-Europe politician, addressing those concerns is hard. It’s much easier to blame the Russians.

Besides, if you want to point fingers at Russian collusion, the mainstream pro-European German government’s pipeline dealings with Vladimir Putin are far more significant. A former German chancellor is playing a major role in a Russia-owned company, palling around with Mr. Putin and even attending his birthday party. If there’s a Russia collusion scandal in Europe, that’s it.

But still mainstream politicians—even politicians in Germany’s own government—brazenly accuse others of working with Russia.

We saw this in Britain’s Brexit referendum. Former Labour Party Minister Ben Bradshaw said that it was “highly probable” that Russian cyberwarefare caused Britain’s Brexit vote. That idea has been repeated by left-wing news outlets. The Guardian, especially, has spent months gleefully peddling left-wing conspiracy theories about Russia. It even claimed that then UK Independence Party leader Nigel Farage ferried data between Donald Trump’s campaign and Wikileaks founder Julian Assange on a usb stick as part of one vast Russian conspiracy to steal both the Brexit vote and United States presidential election. A London School of Economics academic claimed that Russian interference means that the Brexit referendum is invalid.

All this is despite the fact that only 105 Russia-linked Twitter accounts posted in the run-up to the vote. Facebook said that Russia spent a total of 73 pence (us$0.93) on ads during the vote—reaching a total of 200 people.

Who knew stealing an election was so cheap?

But there is a sinister side to all of this.

In December, the EU announced that it was launching a “war on fake news.” Channel 4’s FactCheck (hardly a euroskeptic institution) warned that this isn’t simply about getting the facts—some officials “clearly believed that the battle against misinformation was actually a battle against euroskeptics. They saw their mission in this fight as defending the EU and its institutions.”

“Ramón Luis Valcárcel Siso, the European Parliament’s vice president, laid this out in stark terms, admitting the campaign against fake news should aim to stop certain politicians from winning seats in the EU’s next election,” it continued (emphasis added). The article went through the EU’s own documents that outline their war against fake news, before concluding that the effort “seems explicitly designed to protect the EU and its institutions, and stop euroskeptic politicians making progress in elections.”

How much more will they step up their efforts if euroskeptic politicians make great strides this week?

They are already putting pressure on social media companies to clamp down on “fake news” (anti-EU news). The EU has also stepped up its monitoring of the news media—issuing regular reports on news articles that are shared widely on social media.

It’s easy to see the EU launching a push to control the press if it blames an election setback on Russian fake news. It’s already threatening social media with more regulation if the companies don’t voluntarily sign up for the EU’s Code of Practice on Disinformation.

And on the list goes—all these examples are just from the last couple of months. And all this comes after they got a telling off from the Dutch Parliament. Before then, the Disinformation Review bureaucrats were even more liberal with what they branded as “disinformation.”

These are the kind of stories the EU wants erased from social media. And if the social media companies don’t get rid of them now, EU legislators and bureaucrats will pass laws or enact regulations to make it happen. Soon you may not be allowed to call European leaders “corrupt,” call the EU “undemocratic,” or deny that Europe brings “benefits.” All that is “disinformation.”

Europe’s latest law cracking down social media is the cover article for the new Trumpet issue. In that article, Trumpet editor in chief Gerald Flurry wrote:

Germany’s ambitions for the Internet should concern everyone, even those who don’t have a computer. The EU’s behavior on this issue exposes the dictatorial nature of this German-dominated entity. Really, we are witnessing the manifestation of the spirit of the Holy Roman Empire in the tech world.

We see the same spirit in this European version of the Russia collusion scandal. Those at the top of the EU view themselves as the preordained masters of the universe. If people vote against their policies, it cannot be because they are wrong. Instead, it has to be the result of some outside, malign actor—Russia. And the public cannot be trusted to choose for themselves what they read. By voting against the EU, they’ve proved that they’re too stupid to be trusted with that responsibility. To help them vote in a more “educated” way, the EU must select what news they’re allowed to see. Thus, each setback for the EU merely becomes yet another reason why the EU must do more.

It’s the same spirit behind the Russia collusion scandal in the U.S. Those opposed to President Donald Trump see themselves as smart, sophisticated, default leaders of America. If they lose an election to someone like Mr. Trump, they think that something is badly wrong and that they must find a way to regain power. And again, Russia is a convenient excuse.

The Bible clearly explains the EU’s behavior. It is the early stages of an empire that has risen in Europe repeatedly—the Holy Roman Empire. Mr. Flurry wrote in his article:

The late Otto von Habsburg was from the famous Habsburg dynasty of the Holy Roman Empire and a member of the European Parliament. He said, “The [European] Community is living largely by the heritage of the Holy Roman Empire, though the great majority don’t know by what heritage they live.” … The EU is not a democratic organization—it is an imperialistic empire. The world will learn this very soon. …

Mr. Habsburg also said, “We possess a European symbol which belongs to all nations of Europe equally. This is the crown of the Holy Roman Empire.” Hitler called his Nazi empire the Third Reich, after the First Germanic Reich of Charlemagne and the Second Reich of the German empire. The EU is about the Germans ruling more than just Germany: They want an empire! They want to control the Internet—and that is only a stepping-stone to controlling the world! Every time it has risen, the Holy Roman Empire has made an attempt to do just that! These Internet regulations show that the spirit of Charlemagne has returned.

This spirit is why the EU’s instinctive response to any problem is more control.

The EU elections this week are an opportunity for you to watch that in action. If the pro-Europeans do badly, or are seriously challenged, expect them to push for more regulation of the Internet, social media and the press. That’s just the spirit of the Holy Roman Empire.

For more on this story, be sure to watch for Mr Flurry’s article “Germany Is Taking Control of the Internet”—it will be posted on our website later this week.

In the meantime, if you would like to know what the Bible says about this power, read our free book The Holy Roman Empire in Prophecy.