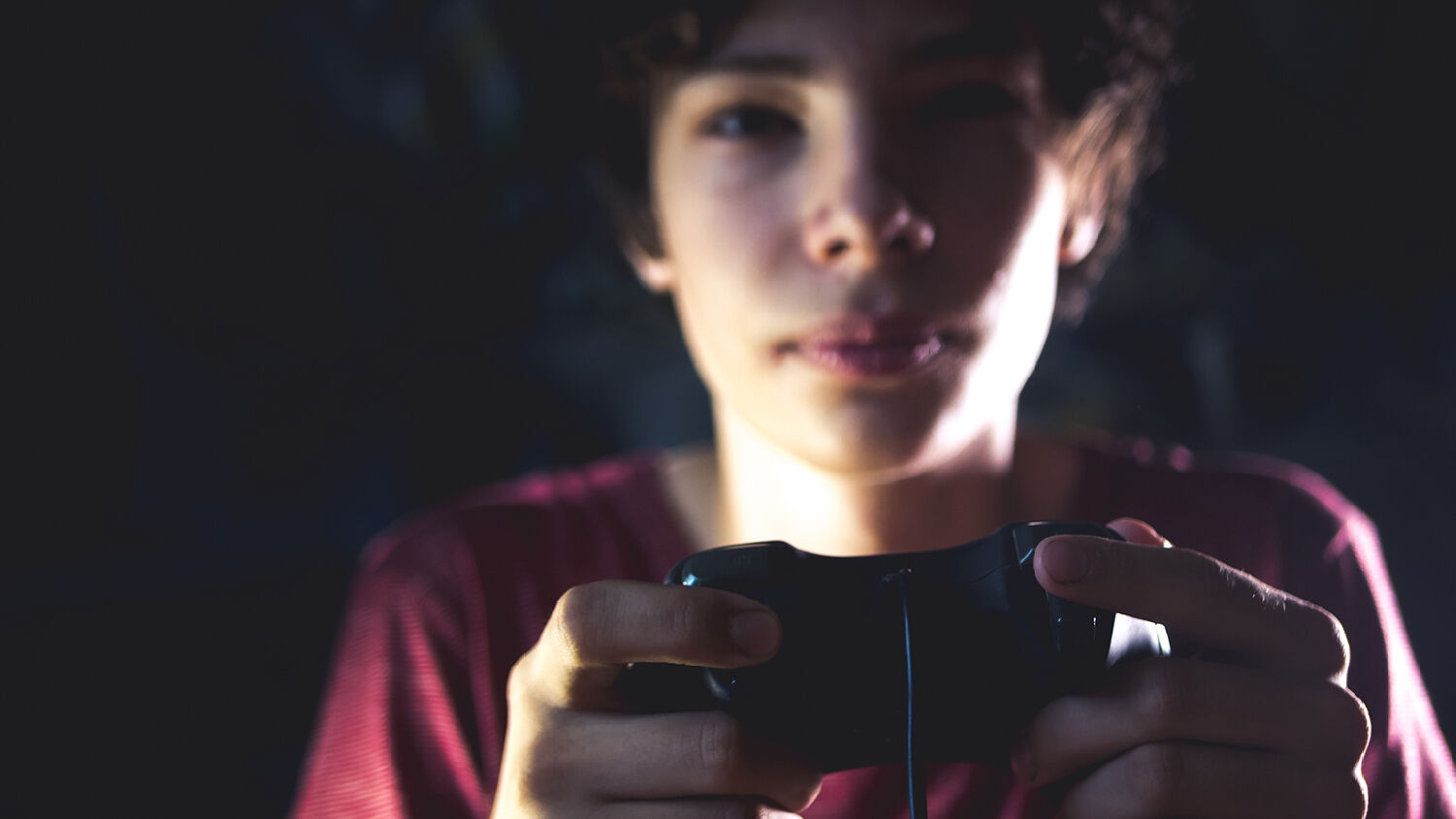 Have you let technology enslave you?

The boy was desperate. Gripping a hammer, he smashed the windshield of a family’s car. Over shards of glass, he clambered inside.

Why? The car was his own family’s car, and he thought his parents had locked his gaming device inside. He really, really wanted to keep playing the video game Fortnite: Battle Royale.

After this incident, the boy’s parents took their young son to the hospital. He received therapy for 11 days and gave up the game for good. This boy is now 13, and even he doesn’t understand why the game once had so much power over him. He told the Boston Globe, “It’s hard for me to understand why I got to the point where I was playing it so much and what I’d do to be able to play.” Now that he is free from the game’s grip, he realizes how much of a hold it has on his peers: “The little kids on the school bus have gone from Pokeman cards to Fortnite. They’re in third and fourth grades, and that’s all they talk about.”

Many parents deceive themselves into thinking that this wildly popular video game is fine because it isn’t as violent or gory as other games on the market. However, Fortnite is so addictive that one British behavioral specialist likened the game to heroin.

Often described as a cross between Minecraft and The Hunger Games, the premise of the game is that 100 competitors are dropped onto an island, and they gather weapons and build structures for protection while killing off the other competitors. The last player or team standing wins. This extremely popular game has had more than 250 million players, with more joining every day.

In 2019, just under a third of Fortnite users played the game 6 to 10 hours per week. The most hardcore players spent 21 hours or more playing the game. In one study, 15 percent of players said they had skipped “a lot” of school to play Fortnite. Children have been admitted to hospitals for malnutrition because they refuse to eat while playing the game for hours on end. The game is breaking up marriages; parents are fighting about who allowed it in the house in the first place. Desperate parents bring their children to psychiatrists and hospitals in a last-ditch effort to break the habit.

There is a reason why Fortnite is so addictive. Modern game designers study slot machines, which are designed to make gamblers keep coming back for just one more chance to win. This is called a variable reward system. Fortnite capitalizes on the human brain’s love of rewards and exploits the lack of self-control in adolescents, which makes them particularly susceptible to this reward system.

The designers of these programs aren’t the only ones to blame. The parents of tech-addicted children should have put restrictions on them to prevent them from becoming addicted in the first place. Whenever I read stories of children playing video games until 4 in the morning, I wonder, Why aren’t the parents making them go to bed?

Children want no limits. Even parents believe that limits are generally bad. But children without limits are miserable!

If you are a teenager, you are especially vulnerable to addictive technology like this game. Are you allowing yourself to become enslaved to the virtual world?

How did the boy who smashed his parents’ windscreen get into playing Fortnite? After changing schools, he struggled to fit in. Fighting loneliness, he discovered that he could make “friends” through the online world of Fortnite. The more time he spent playing the game, the more he improved, and the more “popular” he became in the Fortnite community. In time, the video game became his reality, and real life was secondary. He pulled away from his family and former friends and delved deeply into the online world.

Because you play with other people in the Battle Royale mode, Fortnite is promoted as a way to develop friendships. Surviving on your own in Battle Royale is difficult, but if you make a team with other players, you are more likely to win. But are these virtual friends on Fortnite—or Instagram, Facebook or Snapchat, for that matter—really your friends?

Studies show that although this generation is the most connected generation in history because of modern technology, young people today are lonely and depressed. Teens today have everything they could ever want, but still they are depressed. Young people who use social media constantly feel more socially isolated than those who don’t. Even those who have many online friends or video game pals feel very lonely in real life.

Young people today get out less, spend less time together with other teens, and often simply don’t know how to talk to each other, unless it’s through a headset, looking at a screen, alone in a dark room.

At Trumpet headquarters in Edmond, Oklahoma, staff members and Herbert W. Armstrong College students are preparing for this year’s Philadelphia Youth Camp. I once gave a lecture at camp titled “Dare to Be Square.” A square is balanced: All four sides are equal. We need to be balanced in our physical health and fitness, our education, our spiritual lives and our social lives.

People have all sorts of reasoning, explanations and arguments for how they should live their lives. And whether it’s a middle-school child addicted to gaming or a real-life violent gang member or a middle-aged woman living in the suburbs, it almost always gets down to this: The right way for me to live my life is whatever I think is best.

We all tend to think that way, even though absolutely nothing in the universe would function or even exist without law, without cause and effect.

What is that life-governing, powerful, unchangeable law? It’s actually even simpler to describe than the simplistic gameplay of Fortnite. Herbert W. Armstrong summarized it in The Incredible Human Potential: “God’s law—the basis of God’s government—is the way of love—outgoing concern for the good and welfare of others, love toward God in obedience, humility, and worship—the way of giving, sharing, helping, cooperating.”

Whether it’s a physical, mental, spiritual or social aspect of your life, whatever situation you’re in, compare your mentality to that law. Obeying that law will lead to balance, success, purpose and happiness, every time. It’s cause and effect, just like the laws of biology or physics.

In the case of video games, it’s obvious that those sitting in front of a screen and interacting with others in such a limited, imbalanced way does not follow the law of love. Giving, sharing, helping, serving and cooperating are actions—you have to get up from the couch to do them. In 1 Corinthians 9:19, the Apostle Paul said that he worked hard to be a “servant unto all.” The word “servant” here means “bondslave.” Paul tried to serve everyone that he came into contact with. That required vigorous action on his part, not engaging in frivolous self-entertaining pleasures for hours at a time.

What will really make you happy? Serving. That requires human interaction. Develop deep and lasting friendships with others in the Church. Learn to share yourself in human relationships. Share your warmth, your love, your plans, your interests, your dreams. Listen to others as they share these things too. Offer kindness and encouragement when others are down. You can never give away too much love!

Everyone wants a lot of friends. Even the most introverted person craves social interaction. Proverbs 18:24 shows that you can have a lot of friends—if you give of yourself first. Unless you help others grow socially, you won’t grow socially. Giving is the only way to build lasting friendships.

Even if you don’t play Fortnite, you are very likely addicted to some degree to electronic technology: Snapchat, Instagram, Twitter, Facebook, YouTube, Netflix and surfing the Internet in general all have addictive qualities. The companies that design social media applications, games, video streaming services and even television have spent decades and millions of dollars learning to design their products to make them as addictive as possible and as profitable as possible. The result is your attention is snatched away from what really matters.

Every day, there is a real “battle royale” raging. Its objective is not only your attention, but control over your mind. Satan exists, and he wants to control your attention and your time. He wants you to break the laws that lead to success, balance and happiness. He wants to addict you to electronic technology and other pursuits that waste your time and distract you from what really matters in life—developing your relationship with God and His Family.

Don’t let yourself be programmed. Dare to be different—dare to be square. Dare to learn God’s laws of success and happiness, and lead a balanced life of purpose and incredible potential.