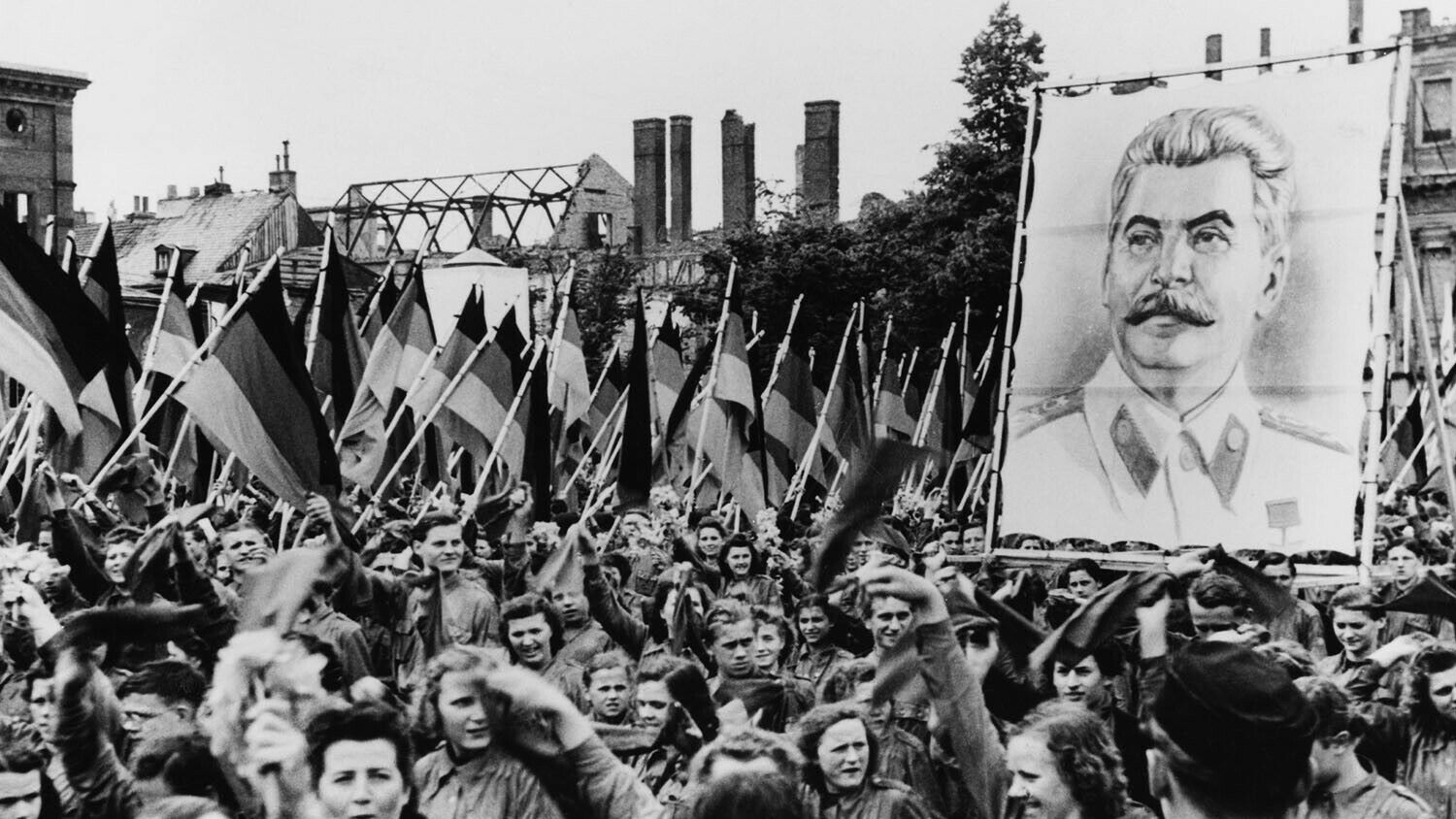 A Soviet-sponsored youth rally in the Lustgarten in Berlin, Germany, June 1, 1950
FPG/Getty Images

Recent poll indicates Russians like the 20th-century strongman and want another for the 21st century.

Levada Center, an independent pollster, revealed on April 16 that approval of Soviet leader Joseph Stalin is at a record high among Russians. Levada polled 1,600 individuals from March 21–27, soon after the 66th anniversary of Stalin’s death. It found that a record 70 percent of Russians approve of Stalin, saying that he played a positive role in Russia. This is up 16 percentage points from 2016.

The poll also found that those who saw Stalin’s role negatively dropped 13 points from 2016 to a record low of 19 percent. Academy of Sciences sociologist Leonty Byzov said that this perspective was based on a purely “mythological image” of Stalin, who is responsible for the deaths of more than 20 million people.

This positive view of Stalin is at least partly the result of a propaganda program ultimately led by current President Vladimir Putin. The propaganda seeks to promote Stalin as the primary force behind Russia’s World War ii victory over Nazi Germany. Putin clearly thinks highly of his nation’s Soviet history, saying in 2005 that the collapse of the Soviet empire was “the greatest geopolitical catastrophe of the century” (emphasis added).

Russians clearly support a strong leader who takes bold actions. Although they may have a “mythological image” of Stalin, what they are really interested in is a strong Russian leader who will make Russia powerful again. This positive view of Stalin reinforces the support they will give the strong leader prophesied in this end time.

The Bible describes an end-time military alliance called “the kings of the east” (Revelation 16:12) that will deploy a massive 200 million-man army (Revelation 9:16). Ezekiel 38 and 39 identify many of the nations that will form this Eastern alliance, which you can prove by reading our free booklet Russia and China in Prophecy.

The Bible makes clear that at the head of this army is one man—an evil, Stalin-like leader.

“Son of man, set your face against Gog, of the land of Magog, the prince of Rosh, Meshech, and Tubal, and prophesy against him” (Ezekiel 38:2; New King James Version). As Russia and China in Prophecy brings out, Gog primarily refers to Russia, and Magog to China. Throughout history, Meshech appears in various forms, relating to the modern spelling of Moscow; the city of Tobolsk, once Russia’s eastern capital, is derived from Tubal.

Russia and China will be the primary nations of this alliance, and the phrase “the prince of Rosh” refers to one strong individual leading it all.

“Rosh was the ancient name of Russia, once called Rus,“ Gerald Flurry writes in his booklet The Prophesied ‘Prince of Russia.’ He continues:

So who is this “prince” of Russia, Moscow and Tobolsk? The use of all three names shows that this is an individual ruler of all the peoples of Russia, from the west to the east. … When you study these scriptures alongside current events revealing modern Moscow’s imperialist direction, you see that Russian President Vladimir Putin could well be the prince of Rosh. We strongly believe he is.

The results of the recent Levada poll show that Russians favor strong leadership—and this is exactly what Bible prophecy says they will get.

Mr. Flurry continues by highlighting the frightening similarities between Stalin and Putin:

The prince of Rosh is prophesied in Daniel 11:44 to lead a bloody and terrifying clash against “the king of the north,” German-led Europe. By this time, America, Britain and Israel will have already fallen (Hosea 5:5). This clash will mean war on an unprecedented scale—until all mankind would be wiped out if Jesus Christ did not return to stop it (Matthew 24:22).

Even in this there is incredible hope. Mr. Flurry concludes by writing, “Vladimir Putin is a sign, literally a sign, that Jesus Christ is about to return! This is one of the most inspiring messages in the Bible. What we are seeing in Russia ultimately leads to the transition from man ruling man to God ruling man! And it is almost here!”

The times we are living in could not be more exciting! We need to watch Putin closely, because the stronger he gets, the closer we are to the return of Jesus Christ. Russians’ increasingly positive view of Stalin will lead them to support Putin’s Stalin-like actions as he exerts his dominance. To learn more, please read our free booklet The Prophesied ‘Prince of Russia.’