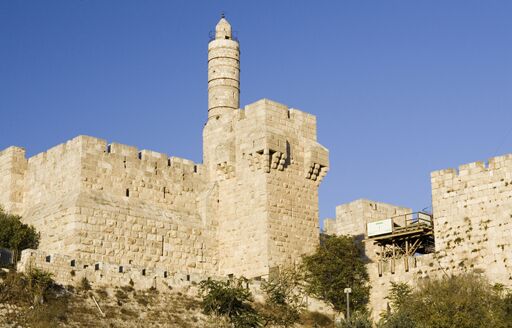 King David was the 10th century b.c. poet-warrior and slayer of Goliath, whom the Bible says consolidated and expanded the ancient Israelite kingdom into a regional power. In approximately 1000 b.c., King David conquered Jerusalem from the Jebusites (Washington Post, December 2), and subsequently made it his capital. According to the Bible, King David’s palace was partially built by workers sent to him by the Phoenician king of Tyre as a gesture of friendship, as is described in 2 Samuel 5:11.

Eilat Mazar relates that, although the location of King David’s palace was very elusive, the Bible itself played a significant part in being able to locate it. Ms. Mazar speculated that a previously uncovered and famous stepped-stone structure located below her proposed excavation site was actually part of the Jebusite fortress that King David conquered. Also, in the same area and slightly lower than her proposed dig-site, Phoenician capitals (the tops of Phoenician-made columns) had been previously unearthed. To her, this too suggested that a monumental building may have stood further up the hill.

Combining these two known archeological finds with the Bible’s description, she then theorized where David’s palace would have been built. The Bible indicates in 2 Samuel 5 that when the Philistines came to fight, King David “went down to the hold,” or fortress, to meet them. Ms. Mazar said that, after reading this, she often wondered, “down from where? Presumably from where he lived, his palace” (New York Times, August 5)

According to Ms. Mazar, the area above the fortress ruins and Phoenician capitals was a logical location for King David’s palace because it would have placed it outside the original walls of the cramped city of Jerusalem and on the road to Solomon’s Temple on the Mount.

Within weeks of beginning the dig, Ms. Mazar’s team was uncovering the remains of many rooms. At first, most were more recent Roman structures, like baths and pools, but then, within the boundaries of the limited excavation area, she found the remains of “massive older walls underneath the Roman structure, running toward the rim of the Kidtron Valley” (Washington Post, op. cit.). The size of the walls, which constructed with boulders are on average two yards thick and extend at least 30 yards (Times, op. cit.), give credence to the importance and grandeur of the structure.

Below the walls, they first found 11th-century pottery. Then, within one room above the 11th-century fill, 10th-century pottery, dating to the time of King David and free from any other material from another period, was found. According to a relative of Ms. Mazar who is also an archeologist, “the sample was among the finest from that time found in Jerusalem” (Washington Post, op. cit.).

Up to this point, only a small fraction—up to approximately 10 percent of the structure—has been exposed, but the finds have been remarkable. In fact, Ms. Mazar described her discovery which is potentially David’s home as “not just a house, but a fantastic house” (ibid.). In another uncovered room, dating to the 6th century b.c., a bulla, or seal, was found inscribed with the ancient Hebrew name of Jehucal, son of Shelemiah, son of Shevi (Canadian Jewish News, op. cit.). Jehucal is a Judean prince mentioned in Jeremiah 37:3. This fact suggests that the site was an important seat of Judean royalty for four centuries after King David. It also matches the biblical account of the palace being in continuous use from its construction until the conquest of Judea and Jerusalem by the Babylonians in 604-585 b.c. Several years ago, another royal seal was found in the general region. It showed the name of Gemaryahu, son of Shaphan, who is also mentioned in the book of Jeremiah (New York Sun,August 1).

Also lending support to the conclusion that this was David’s palace is that up to this point there have been no finds of idolatrous statuettes or ritual crematoria which are found in contemporary Phoenician and Philistine settlements. “Furthermore, the building appears in a time period where such massive constructions were extremely rare and represented the greatest sort of public works” (Canadian Jewish News, op. cit.).

Why is King David’s palace important?

In contrast to the Bible’s account, archeologists have long debated “to what extent Jerusalem was an important city or even a city in the time of David and Samuel” (Times, op. cit.). Some scholars suggest that King David and Solomon were nothing more than petty tribal chieftains who ruled over an area comprising little more than a few scattered rural clans (Washington Post, op. cit.). One renowned archeologist has even hypothesized that Jerusalem during David’s time was nothing more than a “typical hill country village” (International Herald Tribune,August 5). Some scholars go even further, suggesting that the biblical account of King David is nothing more than a myth (Washington Post, op. cit.).

If the massive structure found by Ms. Mazar does prove to be 10th century, Seymour Gitin, director of the Albright Institute of Archaelogical Research in Jerusalem, says it will “demolish the view of the minimalists” who dismiss the biblical accounts of history and religion (ibid.).

It would also discredit the claims of many Arabs, including the late Yasser Arafat, who deny any Israelite links to Jerusalem. Digs in the city, especially in areas around the Temple Mount, have been politically sensitive in the past (New York Sun, op. cit.).

Even if this structure does not turn out to be the palace, it could still be an archeological find of “revolutionary proportions” (Canadian Jewish News, op. cit.). Regardless, it is a major construction from the early Israelite period in Jerusalem. As such, it would negate the views of critics who claim there is no evidence of a major Israelite presence during this time period. The Bible’s description of a great, unified and influential monarchy of David and Solomon would also be reinforced.

Lately there have been other archeological discoveries within Israel that have also supported the Bible’s validity.

This past July, in what archeologist Michael Homan calls an “Indiana Jones moment,” the sun’s rays illuminated an inscription of the Hebrew alphabet on a 40-pound stone, found at the Tel Zayit excavation site. After analysis of the stone, the two lines of incised letters was reportedly determined to be the earliest known specimen of the Hebrew alphabet and an important benchmark in the history of writing. Lawrence Stager, a Harvard archeologist working on other excavations in Israel, says that what makes this find exceedingly rare is that it was found with pottery that “fit perfectly with the 10th century” (New York Times, November 9). Dr. Ron Tappy, the lead archeologist for the dig, is stating that actually “[a]ll successive alphabets in the ancient world, including the Greek one, derive from this ancestor …” (ibid.).

Tel Zayit is thought to be an ancient Israelite border town 18 miles inland from the ancient Philistine port of Ashkelon established by an expanding Israelite kingdom based in Jerusalem. Dr. Tappy says that such a well-developed border town suggested a “centralized bureaucracy, political leadership and literacy levels that seemed to support the biblical image of the unified kingdom of David and Solomon in the 10th century b.c.” (ibid.).

Another interesting find of late was that of a tiny ceramic shard that was unearthed at the biblical city of “Gath of the Philistines.” According to the Jerusalem Post, this shard contains the earliest Philistine inscription ever discovered. Fascinatingly, the inscription mentions two names that are surprisingly similar to the name Goliath. What makes this story even more exceptional is that according to the Bible, the city of Gath is identified as Goliath’s hometown (1 Samuel 17:4). Although Goliath was supposedly a very popular name during the time of King David, this find still enhances the Bible’s validity.

As more and more evidence of the Bible’s accuracy is unearthed, scholars are forced to reconsider the veracity of the Bible as a historical document and its use as a reliable map for archaeological discovery.

For many people, this brings up some unsettling questions. After all, if the Bible is proven to be archeologically and historically accurate, what about the rest of the written Word? Is it possible that what the entire Bible says is true? Should we also consider it as a reliable map for instructions on human living?

In light of these and the many other recent archeological finds not mentioned here, it is important to reevaluate just what modern education and society say about the Bible. Maybe it is time for all people to question Bible critics and prove the veracity of the Bible for themselves.