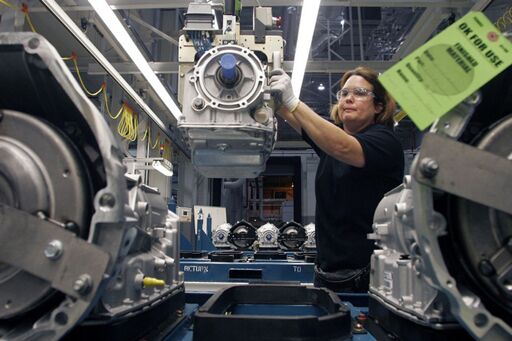 America’s middle class rose on the back of massive industrial output during the 20th century. But this engine of prosperity is being hammered, and the economy is hurting as a result.

For the past 50 years, American manufacturing has dominated the globe. It turned the tide in World War ii, and hastened the defeat of Nazi Germany; it subsequently helped rebuild Europe and Japan; and it enabled the United States to outlast the Soviet empire in a Cold War. Concurrently, it met all the material needs of the American people.

On the back of this industrial output, rose America’s middle class. High-paying manufacturing jobs in turn helped spur a robust and growing economy that had little dependence on foreign nations for manufactured goods and armaments.

The loss of the manufacturing industry manifests itself most clearly in job losses. During the 1970s, approximately 25 percent of American workers were in manufacturing (Economist, October 1). From 1990 to present, manufacturing jobs have decreased every single year; since 1996, they have plummeted by almost one fifth.

Most recently, manufacturing job losses, and the “hollowing” out of American manufacturing, have been evidenced in the auto industry.

On November 21, as has been well-publicized, General Motors Corporation (GM) announced plans to cut 30,000 jobs and close nine manufacturing plants across North America. But Ford, another American icon, has been slashing jobs too. This past year Ford announced its most recent plan, which called for 7,500 job cuts in 2006. These cuts were on top of the 20,000 layoffs that were announced just four years ago (Wall Street Journal, December 2).

Egan-Jones Rating Co, an independent firm, is predicting that “This is the beginning of the end of the U.S. auto industry as most people have come to know it” (TheStreet.com, May 5).

However, the auto industry is just one example of the overall decline in American industrial might over the past couple of decades. Other U.S. manufacturing giants are failing too; in fact, the U.S. has lost 3 million manufacturing jobs overall since 1998 alone (Seattle Times, April 17).

In 2003, industrial giant Bethlehem Steel folded causing thousands of employees and retirees to lose their pensions (Wards Auto World, November 1). Any Pittsburg resident will be able to tell you how unprofitable the steel industry has been over the last couple of decades. According to the 2004 “Economic Report of the President,” between 1950 and 2000 the U.S. lost more than 491,000 jobs from the primary metals industry alone, and most of those since 1980. Then, from 2000 to 2003, an additional 149,000 jobs were lost.

In 2004, Levi Strauss closed the last of its more than 60 American factories. “It was like a death in the family,” says Emma Rice, of Morrilton, Arkansas, who worked for Levi Strauss for 32 years (Times, London, Jan. 10, 2004). Unfortunately, the former Levi-employed majority of Morrilton tell the same tale as those from thousands of towns across America that have also experienced the loss of manufacturing jobs.

But why is this happening?

Manufacturing loss is occurring because of globalization and outsourcing. At the dawn of globalization, the elimination of trade barriers opened up access to foreign markets for American manufacturers—in return for building factories abroad. In due course, more and more manufacturers set up shop overseas, producing goods to be sold to Americans.

Over time, outsourcing makes Americans poorer, because America’s wealth and technology are being transferred to other nations.

“Historically, manufacturing, exporting, and direct investment produced prosperity through income creation” (Daily Reckoning, April 4, 2003). The wealth of America was created when the profits from domestic manufacturing were diverted into investment in buildings, machinery and technological change. But now outsourcing is providing that income to foreigners.

America may gain access to cheaper products through outsourcing, but it also comes with attendant problems, including a downward pressure on wages. “In the U.S. last year, average employee compensation (pay and benefits) actually fell for the first time in 14 years” (ibid., August 5). Laid-off manufacturers are switching into lower paying jobs in the service industry (Seattle Times, op. cit.). Before, where they made on average $51,000 annually, they now make $16,000 in leisure and hospitality, or $33,000 in health care, or $39,000 in construction (ibid.).

If America does not manufacture and sell goods, then money only leaves the country. The U.S. now imports twice as much as it exports. This has resulted in a trade deficit that has become an unprecedented $800 billion on an annualized basis (Newsweek, December 2). Unfortunately, this trend is showing no signs of abating. In actuality, U.S. exports are declining versus imports right across the board. Even the agricultural trade was in a deficit this past year, for the first time in living memory (ibid.).

Every time an American manufacturer closes and then reopens elsewhere, the foreign country gains American technology. Not having to spend resources developing technology, foreigners can focus on improving it or beating it.

What does this mean for Americans? Does the decline in manufacturing mean an end of the American dream?

First, America as a whole will eventually become poorer, so be prepared to downgrade your standard of living. As progressively more manufacturers move abroad, the flow of money out of the country will exceed the benefits of cheap imports. At some point, America’s trade deficit will overwhelm us. If this trend continues, eventually Americans will not be producing enough to pay for the standard of living post-World War ii America has become used to.

Second, if you are not among the rich, and you rely on a job, be prepared to be faced with job-security issues. In plain language, if you are working in the manufacturing industry, expect wage growth to be poor and expect to be confronted with having your job “outsourced.”

What’s more, by building factories overseas, manufacturers are sowing the seeds of their own long-term destruction by slowly reducing the wealth of Americans, who are their primary customers.

Be warned and remember the old adage, “as GM goes, so goes the nation.”