The outgoing Fed chairman has earned praise in many circles. But he leaves an economy on the brink. 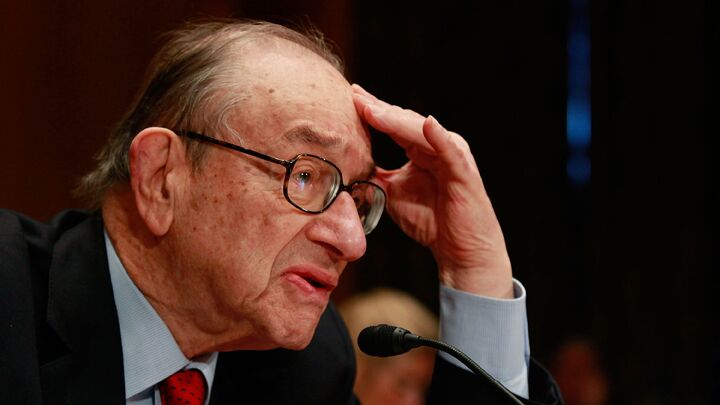 The outgoing Fed chairman has earned praise in many circles. But he leaves an economy on the brink.

Republican Sen. John McCain said that if Alan Greenspan were to die, he would “prop him up and put a pair of dark glasses on him.”

When Mr. Greenspan retires as chairman of the Federal Reserve this January, President George W. Bush’s replacement nominee, Ben Bernanke, will have some large shoes to fill, to say the least.

Over his 18-year tenure, Mr. Greenspan has had many successes. In terms of crisis management, lower inflation and economic stability, he appears to deserve high marks.

Mr. Greenspan came to office just two months before Black Monday, Oct. 19, 1987—the day stock markets crashed and the Dow Jones lost more than 20 percent of its value. It was the largest crash since the Great Depression. On this fateful day, two major events occurred. First, Mr. Greenspan defined Federal Reserve Bank (Fed) policy in respect to “bubble crisis” and, second, he gained the markets’ confidence by doing so.

On that day, Mr. Greenspan revealed his future economic policy of letting bubbles pop of their own accord and then acting quickly to mop up the mess afterward. In essence, he announced the Federal Reserve Bank’s new role as the “lender of last resort” to the financial system, saying that the Fed stood ready to supply as much liquidity (money) as needed into the markets to restore confidence and protect the economy and banking system. In one fell swoop, he put the American taxpayer on the hook to combat any market declines.

The markets reacted positively to Mr. Greenspan’s action: Stocks soon recovered, the economy picked up and Mr. Greenspan had won the confidence of Wall Street.

Greenspan has presided over many crises. In 1990, America went to war in Iraq and U.S. banks started failing by the thousands. In 1997-98 came the Asian currency meltdown, which had its genesis in the 1994 Mexican peso crash, followed later by the Russian default and Argentinean currency hyperinflation in 2002. In 1997, Mr. Greenspan organized the bailout of the hedge fund Long Term Capital Management in order to prevent the stability of the entire market from being compromised. After this came the dot-com crash and the 2001 terrorist attacks followed by Enron and several other corporate scandals.

To Mr. Greenspan’s credit, throughout these crises he still engineered two of the longest economic expansions in American history.

However, the U.S. economy is not as healthy as Greenspan cheerleaders believe. Mr. Greenspan’s “easy-money policy” of slashing interest rates and thereby making massive credit available for the markets every time there is an economic slowdown has been a major cause of the erosion of America’s financial strength (Financial Times, Aug. 26, 2005).

This easy-money policy may help in the short term, but as economy columnist Peter Eavis says, it does much more harm in the long run by “preventing necessary restructuring of the economy, driving down savings, inhibiting future spending and endangering the long-term health of the banking system” (TheStreet.com, Feb. 12, 2004).

Mr. Greenspan’s policies have had other side effects as well.

One of the not-so-obvious but enormously negative consequences of Mr. Greenspan’s economic policy has been the continual erosion of the dollar’s value. His guiding principle of managed low inflation, not zero inflation, is one factor that has led to the colossal loss in purchasing power of the dollar. According to Barron’s, “the damage to the dollar’s purchasing power … came not in the onslaught of historically high inflation during the 1970s, but in the continuous drip-drip of compounding some inflation every year” (Oct. 24, 2005).

Exacerbating the weak-dollar problem is the massive 334percent increase in the supply of money that has occurred over Mr. Greenspan’s18 years. As the supply of dollars has grown beyond demand, its value has fallen.

There are three other major problems with the economy that Ben Bernanke will have to confront.

First, federal government debt has been skyrocketing. Last October it reached a record $8 trillion, more than triple the $2.3 trillion the U.S. owed in August 1987. Just since June 2002, the national debt has increased by a third.

Frighteningly, the percentage of U.S. Treasury securities now owned by foreigners has also increased from 17 to 50 percent since 1987.

For four months, Americans spent more than they earned by borrowing on credit cards or home equity, selling investments (stocks, bonds and other assets), or by using savings from previous months. A lack of savings does not bode well for future economic growth, since savings fuels investment and a nation’s subsequent growth.

Third, the easy-money policy has helped create multiple bubbles and an economy more and more dependent on rising asset values to fund spending. In the late 1990s, people counted on the technology-stock mania to fund their retirement. Today it is the refinancing and home-equity-line-of-credit boom that is inflating the bubble.

Right now the markets believe the economy is as healthy as Mr. Greenspan says it is. Greenspan has the markets’ confidence. But the question is, will Bernanke be as successful?

Ben Bernanke is likely to follow in Mr. Greenspan’s footsteps, maybe carrying Greenspan policy even further. He too recently denied the existence of a housing bubble, and is also in favor of unconventional methods of monetary manipulation.

Individually, each of the above-mentioned problems may be manageable. Taken together, they pose a lethal threat to the health of the nation.

As Peter Schiff of Euro Pacific Capital says, “Never has a changing of the monetary guard taken place with the U.S. economy in so precarious a position” (Oct. 27, 2005).

Bible prophecy shows that natural disasters, terrorist attacks and violence in the cities will further weaken the U.S. As they do, asset values will collapse and the mountains of debt they support will bury the nation.

The Federal Reserve policies implemented in the last two decades have only hastened the economic Armageddon facing an unrepentant nation.