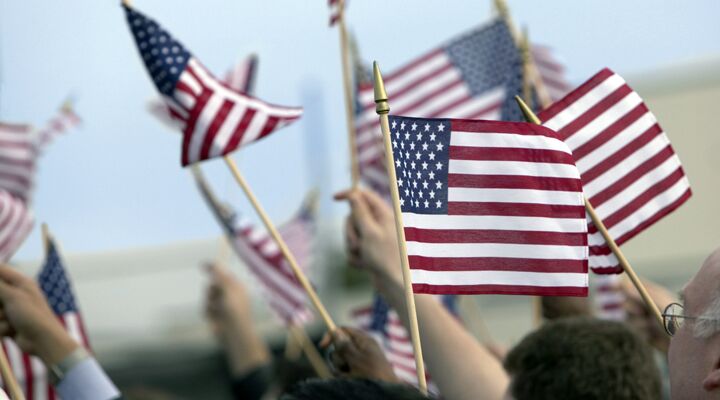 What does it mean to be “American”? Do immigrants strengthen or weaken the broad sense of national identity?

Few questions would elicit a more diverse and emotionally charged range of opinions than this one.

Whatever our opinion on the subject, we must acknowledge that, in fundamental ways, the American identity has broken loose from its historical moorings. In its infancy, the national identity included a specific religious-moral belief system and a particular political ideology. Its central elements included, in the words of Samuel P. Huntington in his book Who Are We?, “the Christian religion, Protestant values and moralism, a work ethic, the English language, British traditions of law, justice and the limits of government power, and a legacy of European art, literature, philosophy and music.”

A distinction must be made. America as we know it today was conceived through settlement,not immigration. We must distinguish between migration of settlers—or colonizers—and immigration that occurs once a country is established. Settlers leave one society to create a new community in a new and often distant place. Settlers, “imbued with a sense of collective purpose … have a decisive and lasting impact on the culture and institutions of that society” (ibid.). Immigrants, by contrast, move from one society to another, rather than creating a new society.

Culture, as Huntington defines it, refers to “a people’s language, religious beliefs, social and political values, assumptions as to what is right and wrong, appropriate and inappropriate, and to the objective institutions and behavioral patterns that reflect these subjective elements” (ibid.). Unlike skin color or ethnic heritage, someone’s culture can change. People can convert to other religions or systems of values and beliefs. They can learn new languages.

Initially, this was the basis of U.S. immigration: There existed an American identity, and people of all creeds and races could take on that identity. In other words, they could Americanize.

This Americanization process was given a metaphor in Israel Zangwill’s 1908 play The Melting Pot. In the play, a youthful Russian-Jewish composer in New York calls America a pot where everyone melds together and re-forms. Theodore Roosevelt, to whom the play was dedicated, called it a “great play”; he agreed with Zangwill’s concept. He, like presidents before him, welcomed large-scale immigration into the U.S., as long as those immigrants became Americans. “Either a man is an American and nothing else, or he is not an American at all,” Roosevelt famously proclaimed.

Another U.S. president, John Quincy Adams, said that for immigrants to succeed in this land, they had to “cast off the European skin, never to resume it.”

Until the 1960s, that is largely what immigrants did.

The height of immigrant assimilation occurred between about 1870 and 1920. Almost every city with a large immigrant population had Americanization programs through local schools and businesses.

The heart of the Americanization process revolved around language. The idea that language is an identifier of nationality can be seen in Genesis 10:31-32 and Genesis 11:7-9, where God divided the nations by separating their languages. Unable to communicate, humankind split along linguistic lines.

Though during America’s assimilation years immigrants came from various language backgrounds, they underwent a vigorous education to learn the American tongue. Contrast that with Congress’s 1975 amendment to the Voting Rights Act that introduced bilingual ballots in certain districts. Or San Francisco’s 1980 trilingual voter pamphlets, ballots and registration forms (in Spanish, Chinese and English). In 2002, some 335 jurisdictions in 30 states had to provide electoral services in non-English languages; 220 were required to do so in Spanish. Huntington shows that this service is also often provided for very small language minorities: “In 1994, for example, Los Angeles County spent over $67,000 on voting services for 692 Tagalog speakers.”

Another central part of the Americanization process was the public school system. That has also changed dramatically since the early 20th century.

In 1974, the U.S. Supreme Court determined that schools could not “simply provide non-English-speaking schoolchildren with the same instruction as English speakers and instead must provide some remedy to compensate for this deficiency in their knowledge” (ibid.).

Soon bilingual education came into vogue. And before long, as Huntington points out, it evolved from a transitional step—a way to help children learn English—into “an emblem of cultural pride.”

The assimilation that schools once provided American immigrants no longer exists. Even the extent to which young people view themselves as American is declining. One study during the 1990s at a San Diego school showed that, of schoolchildren born to at least one immigrant, the proportion identifying themselves as “American” after three years of high school dropped by half. Even the proportion identifying themselves as hyphenated Americans (e.g. Mexican-American) fell 30 percent. But the amount identifying themselves with another nationality (e.g. Mexican) increased 52 percent (“Children of Immigrants: Health, Adjustment, and Public Assistance,” 1999). The public school system actually diminished these students’ sense of national belonging!

Looking at a brief history of education since the mid-20th century, we can see why American students have come to this point.

During the 1960s—a time of civil strife and moral erosion—came a dramatic rise in immigration. It represented a changing ethnic mix: For the first time, most immigrants were coming from non-European regions, and not because they wanted to “be Americans.”

Meanwhile, educators became bent on cracking the melting-pot ideal and replacing it with multiculturalism. Though parts of this doctrine seemed laudable—celebrating the diversity and good in other cultures and learning from those attributes—its implementation nurtured a kind of contempt for traditional elements of American identity. Not only did “equal treatment” of other cultures come at the expense of teaching American values and culture, it even did away with teaching simple facts about American history. Consider: By the mid-1990s, students could graduate from 78 percent of American colleges without taking one course in the history of Western civilization. Not one of the top 50 colleges and universities required a course in American history. And 90 percent of Ivy League students, as polled in the early 1990s, could identify Rosa Parks while only 25 percent could identify the author of the phrase “government of the people, by the people and for the people.”

“Multiculturalism is in its essence anti-European civilization,” Huntington opines. The more disturbing agenda of multiculturalists was not necessarily to teach about diverse cultures the world over, but to study only those cultures deemed once oppressed by the European-American cultures. It thus became a disparagement of the “evil white race.”

Multiculturalists look forward to a time when America “may never again be culturally ‘united,’ if ‘united’ means ‘unified’ in beliefs and practices” (Betty Jean Craige, American Patriotism in a Global Society).

Multiculturalists are getting their wish: Never before has America been so divided.

Modern education says Americanization is un-American—that it implies differing cultures are inferior—when, in the past, all it meant was uniting the people of the land under one moral system and creed.

Education isn’t completely to blame. Many immigrants now enter America with no intention to become American. Because many of them are Latin American, a large number come to join a separate Latino culture existing within the nation. The rising growth and influence of this group in the U.S. has driven some Hispanics to advocate two goals, explained by Huntington: “The first is to prevent the assimilation of Hispanics into America’s Anglo-Protestant society and culture, and instead create a large, autonomous, permanent, Spanish-speaking, social and cultural Hispanic community on American soil”; the second goal stems from the first and seeks to “transform America as a whole into a bilingual, bicultural society” (ibid.).

These goals, if realized, guarantee disunity and disaster!

As the Prophet Amos asked, “Can two walk together, except they be agreed?”

American politics is already riddled with division; consider the state of politics should the nation form into two separate cultural camps!

One of Abraham Lincoln’s most famous statements—actually quoting Jesus Christ—was that a house, or nation, divided against itself cannot stand. The division America faced in Lincoln’s day involved the lamentable mistreatment of the “strangers” within its gates—something God’s Word expressly forbids. But a century later, the cause for division had become the crusade to preserve immigrants’ cultural uniqueness by not assimilating. And this more recent problem has come to not only threaten American identity—but even to threaten internal peace and stability. Incorrect immigration practices are deepening the racial and cultural divisions within America today.

Theodore Roosevelt knew of these dangers. Years after the premiere of The Melting Pot, aware of the potential for ethnic strife in such a diverse land, he warned: “The one absolutely certain way of bringing this nation to ruin, of preventing all possibility of its continuing to be a nation at all, would be to permit it to become a tangle of squabbling nationalities, an intricate knot of German-Americans, Irish-Americans, English-Americans, French-Americans, Scandinavian-Americans, or Italian-Americans, each preserving its separate nationality.”

Roosevelt’s fears are in danger of being realized. America has become a complex patchwork quilt of races, ethnicities, religions, languages and loyalties. The more each of these groups puts its own identity and loyalty above the national identity, the weaker becomes the moral and political fabric of society.

Ethnic hatred, racial strife and religious divisions are destined to grow more fierce. The 1992 race riots in Los Angeles, Calif., and Christian-Muslim clashes recurring in Dearborn, Mich., are only precursors to what is coming.

These tensions will also explode on the world scene and spark a cultural clash unlike any in humanity’s history.

The End of Immigration Troubles!

Thankfully, however, we are not far from the time when these massive problems will be solved—when Jesus Christ returns to save mankind from self-annihilation and usher in a world where immigration troubles will cease to exist. They will not be solved through man’s melting-pot metaphors or his versions of multiculturalism. They will be solved by the direct supernatural help of our great Creator.

Note how this new world will operate:

Debates over language will be obsolete because all will speak one pure language (Zephaniah 3:9).

Morally and religiously, all will subscribe to one belief system—one perfect way of life based on God’s law (Isaiah 2:2-3).

There will be no crime, no disease.

Gone will be the desire to leave one’s own land for one with more opportunity—for every nation will have plenty! Each man will enjoy the blessing of owning his own plot of land (Micah 4:4).

Relations between nations and ethnicities will be characterized by cooperation and peace. Cultural diversity will be celebrated, and the right kind of multiculturalism will be used to uphold the strengths of all peoples.

And though there will be no melting pot on the physical level—but rather an appreciation of the variety God created within the diverse cultures—all will be God’s people, eventually assimilated into one spiritual nation.