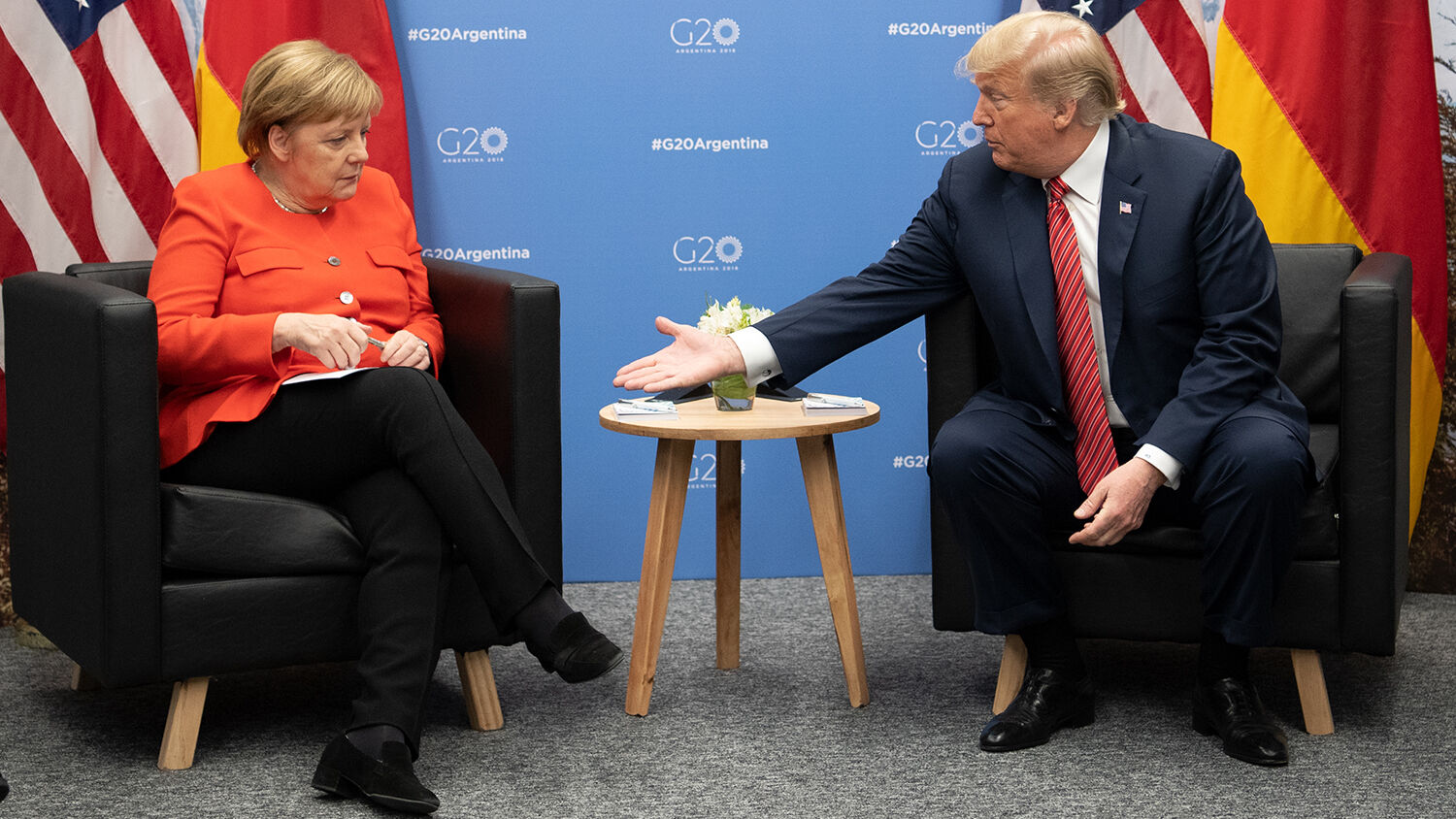 On Monday, the conference released its report, which unabashedly portrayed President Trump as the destabilizing force in the world. German media outlet Deutsche Welle wrote: “The global liberal order is fragmenting, but who can fit the pieces together again? … The world is in crisis—and the U.S. is only making things worse. That’s the bold verdict of the Munich Security Report.”

The msc report cited a recent international Pew study that said President Trump is perceived as a greater threat to Europe’s security than China or Russia.

The study also showed that people in France and Germany are significantly more likely to trust Russian President Vladimir Putin or Chinese President Xi Jinping to do the right thing on the global stage than Mr. Trump.

msc chairman Wolfgang Ischinger, a former German ambassador to the U.S., says that this international outrage against Mr. Trump means that Europe must strike out on its own.

Speaking before the conference, Mr. Ischinger said that at this year’s conference, it would be important for Europe to show “non-European participants that the EU is ready to fight for its interests by asserting itself.”

This isn’t the first time Ischinger has used the conference to espouse a more independent foreign policy. However, it is the first time in recent memory that an American president is being used as the rationale behind promoting greater European autonomy.

Ischinger is even going a step further by claiming that Europe needs its own policy in order to counter the highly erratic leadership of the United States.

Ischinger’s comments seem to echo the November 6 comments of French President Emmanuel Macron, who called for a “true European army,” one that would allow Europe to “protect ourselves with respect to China, Russia and even the United States of America” (emphasis added).

All these calls for European unity and militarization are being justified as a counter to Mr. Trump’s actions. In reality, the driving force is not anti-Trumpism but anti-Americanism.

While the European press and leaders portray their anti-Americanism as a newfound reaction against Mr. Trump, this hatred of America was clearly evident before Mr. Trump came into office.

On Monday, Bruce Bawer at PJ Media published “Anti-Americanism: As German as Apple Strudel.” He wrote:

Eighty-five percent of respondents in an Atlantik-Brücke survey, reported faz [the Frankfurter Allegmeine Zeitung], view the U.S. either “negatively” or “very negatively.” Many Germans look more favorably upon Communist China than upon the U.S.; more than half would like Germany to distance itself further from the U.S., with only 13 percent wanting a closer relationship. …

It was predictable enough that faz would link the results of the Atlantik-Brücke poll to the Trump inauguration. But in fact, German anti-Americanism has nothing to do with Trump. Of course anti-Americanism exists everywhere in the world, and especially in Europe, whose political and cultural elites viewed the democratic U.S. from the moment of its founding with aristocratic disdain. But contempt for the U.S. has always been especially intense—and irrational—in Germany, which has its own distinctive reasons (if that’s the right word) for despising the superpower across the sea.

Bawer’s commentary that German anti-Americanism predated the Trump administration, is not just his own invention. He quoted numerous reports, some of which might seem too hard to believe, but just click the links to read it straight from the German thinkers themselves. He continued:

The most sensible journalist in Germany, Henryk M. Broder, noted in a 2013 article for Die Welt that his countrymen’s “viciously romantic anti-Americanism” dates back to the 19th century. … After 9/11, they said that the U.S. was getting what it deserved for having bombed Dresden and Hiroshima. Summing up the general attitude, Broder wrote: “Maybe we have a shameful past, but the Americans have a shameful present.” For Germans, demonizing America is a handy way of dealing with—or, rather, not dealing with—their own history.

In 2014, Eric T. Hansen, an American freelance writer based in Berlin, amusingly recounted in Die Zeit his unsuccessful efforts to sell articles to American publications about various events that revealed the dark underside of Germany. Alas, he discovered that Americans weren’t interested in “Germany-bashing”; by contrast, if the same events had taken place in America, “you would be able to read about them in the German newspapers the next morning.” Hansen observed that anti-Americanism is not only “socially acceptable in Germany,” it’s “downright politically incorrect to miss an opportunity” to put America down. He offered a theory: While the loss of World War ii had rendered anti-Semitism verboten [forbidden], “the resulting vacuum was soon filled by anti-Americanism.” …

Alexander Grau, a German philosopher, pondered this point in a cogent 2014 article: While Germans may attribute their anti-American sentiments to their distaste for a given American leader or American policy, “German reservations about the U.S. are older and deeper. The new anti-Americanism is an old anti-Americanism,” founded in 19th-century hostility to mass society, mechanization and a “ruthless capitalism” associated in the German mind with both America and—ahem—“international financial Jewry.” …

“America,” wrote Grau, “represents just about everything that is frowned upon in this country: individualism, personal responsibility, skepticism toward the state, capitalism.” But most offensive of all to Germans, Grau suggested, is “the idea of freedom,” which brings with it “competition instead of a comfortable collective economy and dissent instead of cozy consensus.” Grau continued, “[T]he idea of freedom doesn’t resonate for them as it does for us. Their ancestors fought wars of conquest, and they understand that; but they’ll never be able to fully process the fact that Americans actually fought a war to free them from a psychopathic dictator whom they had followed, in mindless obedience ….”

The polls and quotes and insults emerging from German leaders and journalists today are merely the most recent manifestations of a historically different mindset, and it is building toward another clash.

This weekend, as representatives of European government and industry listen to msc lectures, they will be talking about world crises, why they should not trust the United States, and how Europe must take matters into its own hands.

To accomplish that, more and more Europeans are believing that they need to form a single superstate, unified under one strong leader. And as we have said for 80 years, that leader will be German.

Already, many are wondering if Merkel’s decline portends unstable, dangerous times for Europe. The New York Times wrote that her announcement “created a degree of panic at the core of the European Union” (Oct. 30, 2018). Former German Foreign Minister Joshcka Fischer wrote on October 30, “It is no exaggeration to say that 2019 will be the year that makes or breaks the European Union.”

This is a crucial, historic time for the Continent. Its migrant crisis and financial troubles threaten to explode. Radical Islam is now deeply entrenched and could launch further attacks at any moment. And now, there is no strong leader at the helm. Can you see why we need to watch Germany?