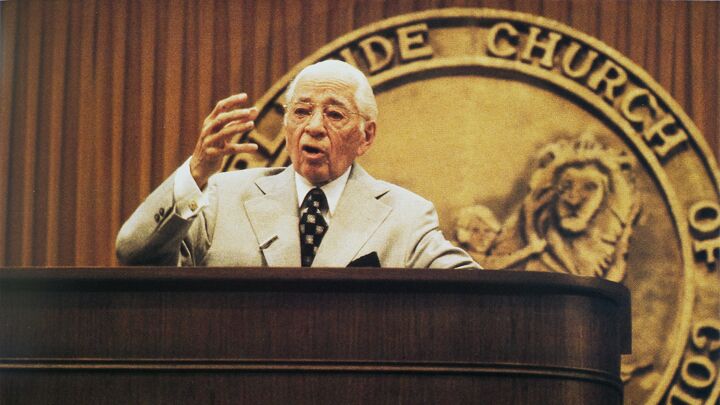 Publisher, educator, broadcaster, humanitarian, “unofficial ambassador for world peace,” Herbert W. Armstrong was an acquaintance and friend of leaders around the world. He was also the founder and pastor general of the Worldwide Church of God.

Born in 1892, Mr. Armstrong experienced the advent of the industrial age, the transportation age, the nuclear age, the space age and the information age. He witnessed two world wars and saw revolutions unfold in culture, economics, warfare and society.

In 1927, amid a promising career in advertising, Mr. Armstrong realized that God was calling him into His service. Following his baptism and the establishment of the Radio Church of God (the name was later changed), Mr. Armstrong and his wife, Loma, and their four children endured almost three decades of poverty as the various aspects of the church grew. Over time, however, the fledgling church in America’s Pacific Northwest transformed into a gigantic worldwide work communicating the good news of the coming Kingdom of God to millions of people around the world.

Mr. Armstrong was a pioneer in televangelism and one of the most prominent religious leaders of the 20th century. He was watched, read and followed by tens of millions of people worldwide.

In 1947, Mr. Armstrong established Ambassador College, a liberal arts institution, in Pasadena, California. He later founded two more campuses, one in Big Sandy, Texas, the other in Bricket Wood, England. Thousands of students were educated in this life-changing institution for higher learning.

Under Mr. Armstrong’s stewardship, the Worldwide Church of God grew at an average annual rate of 30 percent for 35 years. In 1968, the doors began to open for Mr. Armstrong to travel the world and share the gospel message with heads of state and other high officials. In his personal audiences with kings, princes, presidents, prime ministers, emperors, mayors, justices, members of the legislature and other leaders of government, society and business, he became known as an “ambassador without portfolio for world peace.”

In light of the influence Mr. Armstrong came to have later in life, and the tremendous scope to which the work of God grew, it is worth looking closer at its exceedingly humble beginnings.

How Did It All Start?

In the autumn of 1926, Mr. Armstrong was challenged by his wife on the issue of the seventh-day Sabbath. Immediately after, a relative accused him of ignorance for rejecting the theory of evolution. Jolted but determined, Mr. Armstrong began a night-and-day study to definitively prove the truth on these questions for himself.

On the second question, Mr. Armstrong studied the biblical claims regarding creation, as well as “texts on biology, geology, paleontology and the various works on the theory of evolution” (Autobiography of Herbert W. Armstrong). He approached his study from an impartial perspective. “The two subjects—or, rather, the two sides of the same subject of origins—should be unprejudicially and objectively studied together, yet seldom are!” he wrote.

The result? “The trunk of the evolutionary tree was chopped down,” wrote Mr. Armstrong. His studies furnished a firm basis for the authority of the Bible. Next, he devoted his attention to his wife’s assertion that Saturday was actually the true Christian Sabbath.

But do not suppose I quickly or easily came to admit my wife had been right, or to accept the seventh-day Sabbath as the truth of the Bible. I spent a solid six months of virtual night-and-day, seven day-a-week study and research in a determined effort to find just the opposite. I searched in vain for any authority in the Bible to establish Sunday as the day for Christian worship. I even studied Greek sufficiently to run down every possible questionable text in the original Greek.

Although he found it difficult to admit, he came to see that his wife had been right: The Bible endorsed the seventh-day Sabbath.

Having proved the absolute authority of the Bible as G0d’s Word, Mr. Armstrong continued his intensive study of the Bible. He wrote, “My research was totally different from that of students in a seminary. They absorb what they are taught in the doctrines of their denomination. … But I had been called specially by the living God. … I was taught by Christ what I did not want to believe but what He showed me was true!” (Mystery of the Ages).

Mr. Armstrong’s studies led him into a search for the true Church of God, which Jesus Christ promised would never die (Matthew 16:18). He found a small organization that came closer to preaching the true doctrines of the Bible than any other. Unbeknownst to him at the time, God was actually calling him to pick up the baton of His true Church that had become spiritually lifeless, and carry forward with fresh vitality and power.

In January 1934, Mr. Armstrong began the World Tomorrow radio program. One month later, he published his first issues of the Plain Truth, a newsmagazine that evaluated world events through the lens of Bible prophecy. Those who heard and read Mr. Armstrong were enthusiastic about the way he preached the simple, plain truth of God, direct from the Bible. In 1939, Mr. Armstrong began publishing the Good News, a bulletin established mainly for members and co-workers.

Those who heard and read Mr. Armstrong were enthusiastic about the way he preached the simple, plain truth of God, direct from the Bible.

After Mr. Armstrong founded Ambassador College in the autumn of 1947, the college trained educated personnel to support Mr. Armstrong is his work of delivering the gospel to humanity, growing the work even more. The 1950s proved to be a decade of tremendous advancements. In 1953, The World Tomorrow began airing in Europe on Radio Luxembourg. Two years later, the program appeared on television. Thousands of people around the world were converted and became baptized members of the Worldwide Church of God.

The 1960s saw many advancements in the Plain Truth. The first full-color edition was published in 1965, 31 years after its inception. The magazine also began to be published in German, French, Spanish and Dutch. Before long, thousands of non-English speaking members were baptized into the Church.

When he spoke with world leaders, Mr. Armstrong fulfilled the commission prophesied in Matthew 24:14: “And this gospel of the kingdom shall be preached in all the world for a witness unto all nations; and then shall the end come.”

In 1972, Mr. Armstrong broke ground for the construction of Ambassador Auditorium. This magnificent concert hall on the Pasadena campus in California was referred to as the “Carnegie Hall of the West” and was constructed from some of the finest materials on Earth. It hosted the finest artists in the world, including Luciano Pavarotti, Arthur Rubenstein and the Vienna Philharmonic Orchestra.

Matthew 24:14: “And this gospel of the kingdom shall be preached in all the world for a witness unto all nations; and then shall the end come.”

The Church also produced a popular youth magazine with a circulation of 2.3 million, a 32-lesson Bible correspondence course, in which more than 2 million people enrolled over its 30-year lifespan, and an array of books and booklets. More than 40 million books or booklets were distributed over Mr. Armstrong’s 50-year ministry, the most-requested of which was The United States and Britain in Prophecy, at 6 million. Between 1980 and 1985, the Church distributed 447.5 million books, booklets, magazines, newspapers, lessons and letters. In 1985 alone, it answered 1.1 million telephone calls, received 6.7 million pieces of mail, and added 2.1 million new names to its database.

At the end of 1985, as soon as it arrived from the printer, Mr. Armstrong’s final book was requested more than any other. In less than four months, 740,000 people requested Mystery of the Ages, making it the fastest-moving publication the Church had ever produced.

When he died in 1986, Mr. Armstrong left behind a church with 725 congregations in 57 countries with a weekly worldwide attendance of 120,000 and 1,200 ministers. Another 210,000 people contributed to the work regularly, and the Church received more than $160 million annually.

“Mr. Armstrong contributed to sharing the word of the Lord with his community and with people throughout the nation. You can take pride in his legacy. Our prayers are with you. God bless you.” - Ronald Reagan

United States President Ronald Reagan sent this note to the wcg shortly after Mr. Armstrong’s death (emphasis added throughout): “Mr. Armstrong contributed to sharing the word of the Lord with his community and with people throughout the nation. You can take pride in his legacy. Our prayers are with you. God bless you.”

Otto von Habsburg, a member of the European Parliament, sent this message: “Deeply shocked by news of the death of unforgettable Mr. Armstrong. Am with you all in prayers for him and hopes for successful continuation of his life’s work.”

Teddy Kollek, mayor of Jerusalem, wrote, “One could only be deeply impressed by his vast efforts to promote understanding and peace among peoples. His good deeds were felt in many corners of the world.”

Many major newspapers carried the news of Mr. Armstrong’s death. The Pasadena Star News wrote, “[T]hose who choose—or who believe they are divinely chosen—to spread the message of monotheism in the world are bound to endure more than their share of mortal vicissitudes. Many of these men and women, however, leave a legacy that makes all their suffering worthwhile. Herbert W. Armstrong was such a man” (Jan. 17, 1986).

Mr. Armstrong left a tremendous impact. His successors had a marvelous example of success to follow. Joseph Tkach, the man who replaced Mr. Armstrong, stated: “The admonishment is now for those of us still living who now have a task that is set before them, a course that has already been charted by God’s apostle. We need to maintain that course and not deviate from it one iota.” At Mr. Armstrong’s funeral, Mr. Tkach said, “We readily admit and acknowledge that there is no man who can fill his shoes, but, Father, we aim to follow in his footsteps.”

This they did not do. In fact, Mr. Armstrong’s successors did the opposite. Since 1986, the wcg has undergone a complete transformation. The many words of praise and support for Mr. Armstrong turned into words of shame and embarrassment over what he did. These leaders orchestrated a massive betrayal against Mr. Armstrong in the very Church he was used to raise up.

In his book Malachi’s Message, the Trumpet’s editor in chief, Gerald Flurry, wrote about how, after Mr. Armstrong died, wcg leaders knowingly led people astray. Combined with Raising the Ruins, by executive editor Stephen Flurry, these two books provide an in-depth look at the physical and spiritual events surrounding this unprecedented betrayal.

Although Mr. Armstrong’s successors worked furiously to destroy the work God built through him, the message he preached and the work he performed lives on today through the work of the pcg.

Thankfully, the biblical doctrines and teachings taught by Mr. Armstrong have been preserved through video, audio and written material. The work God did through Herbert Armstrong is still having a major impact today.

Mr. Armstrong was God’s 20th-century apostle. Yet today, he is only “dust” in the earth, awaiting the resurrection of the saints. Mr. Armstrong wasn’t perfect, nor infallible. But the fact that he was used by God in this age to broadcast and prepare the way for the soon-coming return of Jesus Christ is undeniable. Mr. Armstrong died more than 30 years ago, but his legacy lives.

Autobiography of Herbert W. Armstrong
Herbert W. Armstrong (1892-1986) was one of the most prominent religious leaders of the 20th century, watched, read and followed by millions worldwide. He founded the Plain Truth magazine, the World Tomorrow television program, Ambassador College and the Ambassador International Cultural Foundation. He served as pastor general of the Worldwide Church of God, and visited heads of state and addressed large audiences globally as an unofficial ambassador of world peace.