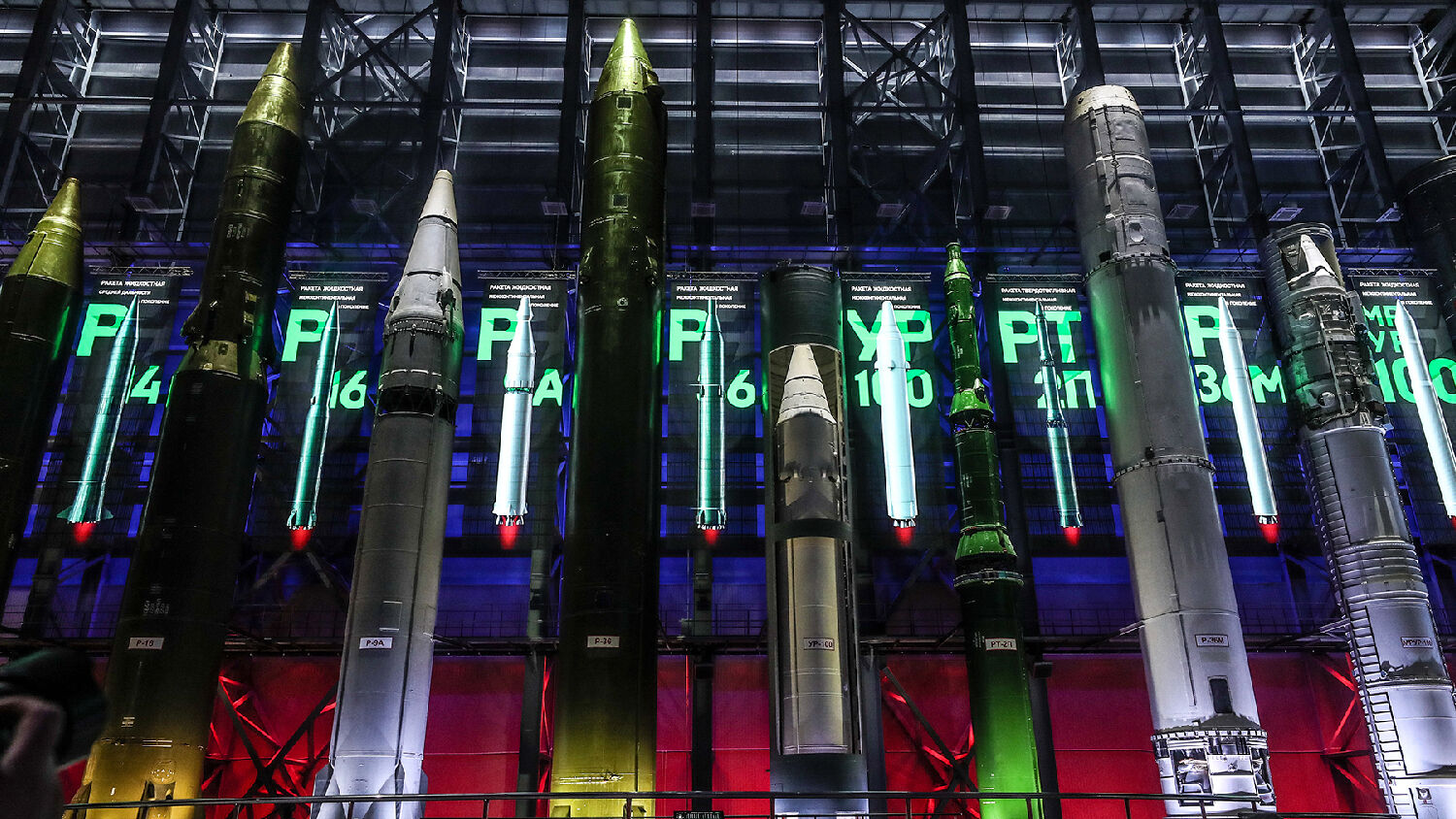 Europe is under pressure as never before.

Russia and the United States suspended their Intermediate-Range Nuclear Forces Treaty just over a week ago. The decisions were made by the Russians and the Americans, but the effects are most dramatic for the Europeans.

The demise of the inf Treaty puts Europe’s historic cities in the nuclear crosshairs. If and when intermediate-range nuclear missiles are launched, they will be inbound, not for Washington or Moscow, but for Berlin, Warsaw, Paris and Rome. This new Cold War-like nuclear reality on the ground in Europe has the potential to escalate fears beyond anything we have seen in years.

Although the inf Treaty is between Russia and the United States, it is all about protecting Europe. In the late ’70s, Russia developed accurate, mobile missile launchers that could hit any European city in under 10 minutes. nato labeled the system as the SS-20 Saber.

These are a particularly scary type of weapon. Long-range intercontinental ballistic missiles (icbms) can hit targets around the globe, but at least they launch from a fixed site and travel high into the atmosphere. Satellites can detect and track these types of missile launches, giving the target precious additional minutes to respond before the inevitable holocaust detonates. Even icbms launched at sea can be detected by satellites.

The SS-20 Saber was different. It was highly mobile, so you never knew where it might launch from. And because it was a shorter-range missile, it would take much less time to reach its target. If and when a missile were detected, it might be too late to respond. When a missile warning system went off, the Europeans and their allies had just seconds to decide if the attack was real or a false alarm. The existence of the SS-20 meant that everyone had to keep their fingers hovering near the nuclear trigger at all times, and be ready to pull it at an instant’s notice.

The SS-20 opened the specter of a nuclear surprise attack against nato installations in Europe.

Europe and the United States were worried. They wanted the SS-20 destroyed. But negotiations made no progress, until the U.S. developed its own version of the SS-20 and stationed them in Europe. Now Moscow and St. Petersburg (Leningrad) were under the same kind of pressure as Paris and Berlin. So Russia backed down, and both sides agreed to destroy all of their short- and intermediate-range nuclear capable missiles.

Russia began working on the ssc-8, a nuclear-capable cruise missile, with exactly the range that the inf Treaty had outlawed. Russia tested it in 2014 and deployed it by 2017.

Europe’s cities have been in the nuclear surprise-attack crosshairs for a couple of years now. But now that the inf Treaty has been suspended and is on its way out, Russia can be much more open about targeting and even threatening them.

Once again, Europeans are nervous. Last week, Spiegel Online wrote, “What may at first glance appear to be a regression to the chilliest days of the Cold War, is in fact much more dangerous. When Ronald Reagan and Mikhail Gorbachev signed the inf Treaty back in 1987, the world was far less complicated. There were only two superpowers, each of which was disinclined to use its nukes thanks to the prospect of Mutually Assured Destruction.”

Now, all kinds of rogue states are getting nuclear weapons. “Military strategists are planning interregional nuclear conflicts; indeed, atomic weapons no longer appear to be taboo,” wrote Spiegel. “The latest generation of nuclear missiles are difficult to intercept. Advanced warning times have become so short that humans are barely capable of reacting. The danger of an unintentional escalation—i.e., an accidental nuclear war—is growing.”

There’s another big difference between 1987 and today. Back then, Europe was content to let America defend it. Actually, it wasn’t content—it protested America’s stationing of missiles on European soil. But it allowed it to happen nonetheless. Europe had almost no other option, living as it does in the shadow of the Soviet superpower. This time, according to a recent Pew poll, Germans and French say they believe Russian President Vladimir Putin is more likely to do the right thing than U.S. President Donald Trump. They want to handle European security on their own.

But this is a big job for Europe. “If you think Europe is under strain now, wait until it faces a new nuclear arms race,” wrote Edward Lucas in the Sunday Times.

But Germany is already showing signs of stepping up to the plate. In the aftermath of the inf’s suspension, Handlesblatt published an article titled “New Arms Race: As Nuclear Treaties Dissolve, Germany Wakes Up to New Responsibilities.” Europe is no longer relying on America for the solution. This time, Europe is relying on Europe, which means it is relying on Germany. The article called for Europe to unify its militaries, quickly.

Germany’s former vice chancellor and foreign minister, Sigmar Gabriel, wrote an article titled “Europe and the New Nuclear-Arms Race.” He wrote, “Europe is now entering a potentially dangerous period and must play a much more active role in the nuclear-arms debate.”

Much of Eastern Europe looks to America for help, but Gabriel wants those countries to look to Germany. “As a first step, it [Germany] should take greater responsibility for Eastern Europe’s military security by deploying more European—and more German—conventional troops in these countries,” he wrote. He advocated “building a new European security architecture” to “enable Europe to play a more central role in containing the new nuclear-arms race.”

But European nations know the recent history of the inf Treaty. They know that the Russians backed down last time only when there were short-range missiles pointing back at them. Since the election of Mr. Trump, Germany has been talking about getting the bomb. The demise of the inf Treaty could accelerate the move toward a nuclear Europe.

Roderich Kiesewetter, a defense expert with Germany’s ruling Christian Democratic Union (cdu) party, said, “If Russia doesn’t dismantle its systems, we must ensure Europe’s security and shouldn’t exclude any options, even nuclear ones.”

This is a controversial issue and could be another major headache for the coalition. But several in the cdu want Europe to beef up its nuclear weapons. If Putin continues to reject all forms of cooperation, “one must, if need be, consider nuclear retrofitting in Europe,” said Elmar Brok, a cdu member of the European Parliament. T-Online wrote that Germany is stumbling “into a debate about nuclear armament, reminiscent of dark times.”

The inf Treaty is not completely dead yet, however. While the U.S. and Russia have both suspended compliance with the treaty, there are still six months until it is completely defunct. But there’s talk in Germany about a foreign-policy push to save it. The possibility has given renewed vigor to European efforts to speak with one voice on the world stage. Germany has a special relationship with Russia, so perhaps it will be able to negotiate some kind of renewed inf Treaty. But even this—Germany taking the lead in nuclear negotiations—would be a big step-up for Europe.

However it plays out, fear of a new arms race is stirring some major changes in Europe. European nations are increasingly looking to Germany. Germany is encouraging that. And Germany is looking to nuclear weapons. There’s a renewed push for a muscular, unified, nuclear Europe. The prospect of nuclear obliteration at the hands of a Russian surprise attack is concentrating minds on this need with renewed vigor.

Trumpet editor in chief Gerald Flurry has long focused on the role that fear of Russia has played in uniting Europe. In the January 2004 Trumpet, he described how the rise of strongman Putin “strikes intense fear in Europe.” In that article, he described how Putin’s cementing of his power in the 2003 election “is triggering a fear that will hasten the uniting of the European Union.”

Ten years later, he described how Putin shocked Europe with his invasion of Ukraine. “Europe’s dreadful fear of Vladimir Putin—its next-door neighbor—is going to help shape and form the Holy Roman Empire rather suddenly,” Mr. Flurry wrote in the May 2014 Trumpet issue.

“The fear you see in Europe because of events in Crimea is going to cause 10 leaders in Europe to unite in a sudden and dramatic way—and in precise accordance with the Bible’s description of that European empire!” he wrote.

He also described how this fear would cause Europeans to demand a strongman—a Putin of their own. “Europe’s new fear of Russia is going to play a major role in hastening the fulfillment of that prophecy!” he warned.

With the demise of the inf Treaty, that fear has stepped up a notch. Watch how Europe responds. Watch the debate about nuclear power in Europe. The fear will bring some massive and long-prophesied changes to Europe.

Herbert W. Armstrong spent decades forecasting this unified Europe under a single German strongman. Now the fear of Russia is helping to bring about the changes he forecast precisely and in great detail. For more on how this will come about, read Mr. Flurry’s article “The Crimean Crisis Is Reshaping Europe!”