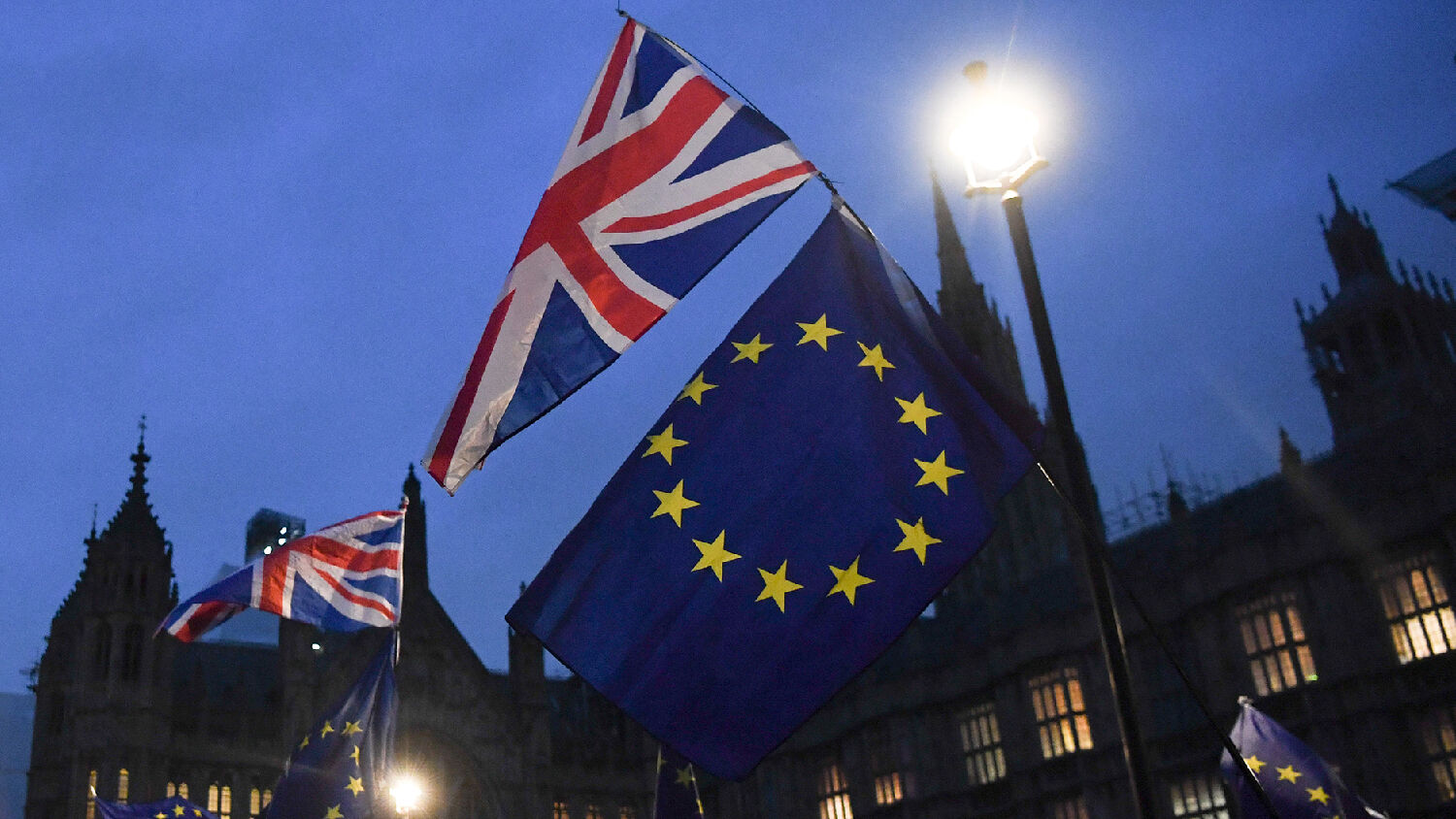 Protesters wave Union Jacks and EU flags outside the Houses of Parliament in central London on January 15.
PAUL ELLIS/AFP/Getty Images

Brexit has thrust Britain into total chaos—and on the anniversary of the death of the man who forecast this exact moment!

From the very day Britain joined what would become the European Union, Herbert W. Armstrong forecast that it would be a ruinous decision. “BRITAIN is going to look back on Monday, Jan. 1, 1973, in all probability, as a most tragically historic date—a date fraught with ominous potentialities!” he wrote. “For that date marked the United Kingdom’s entry into the European Community” (Plain Truth, March 1973).

Britain’s relationship with the EU is ending before our eyes—but it is ending in disaster. Britain’s government has just received its biggest defeat in Parliament since 1924. For two years, Prime Minister Theresa May negotiated a Brexit deal with the EU. Parliament has soundly rejected it. Only 202 members of Parliament voted for the deal, with 432 against.

Labour leader Jeremy Corbyn has put forward a motion of no confidence in the government, which will be decided tomorrow. If that passes, then Labour will have a shot at forming a government, and Britain could end up with a leader radically more left wing than any other in history. But if no one can get a majority, then Britain will be holding elections. If Theresa May wins the vote of no confidence, she faces the Herculean task of renegotiating an exit deal with the EU, in less than three months.

And after that? No one really knows.

All this chaos is full of unknowns. Will Ms. May still be prime minister by this time tomorrow? No one knows. What will Britain’s relationship look like with the EU? No one knows.

Where can we turn for answers and solutions? To the same source that forecast this mess in the first place.

Mr. Armstrong’s forecast was rooted in his understanding of Bible prophecy. In The United States and Britain in Prophecy, he explained that Britain is a descendant of the ancient nation of Israel. He showed that Britain was blessed, not because of talent or righteousness, but because of the obedience of its ancient ancestor, Abraham, the promises made by his God, and the incredible power of that God to keep those promises. Mr. Armstrong also explained the many prophecies that show the curses that would come if Britain disobeyed God. One of those curses is destruction at the hands of a German-led European superstate.

“For 39 years now, I’ve been telling our radio audience and Plain Truth readers that a political union of 10 nations in Europe would rise, resurrecting the Holy Roman Empire of the Middle Ages,” he wrote in that 1973 article. “I was predicting this even before World War ii. Of course, almost no one believed me, then. … How did I know, as far back as 1927, that this coming United States of Europe would spring up—in our time? I knew because I saw it clearly revealed in biblical prophecy. Of course it’s true that almost no one understands biblical prophecy. But no wonder! For almost no one understands what the gospel of Jesus Christ is, or where and how in prophecy the United States and British Commonwealth are identified.”

It is remarkable how prescient Bible prophecy is right now.

Isaiah 59 paints a vivid picture of the state we find ourselves in: “We look for light but find only darkness. We look for bright skies but walk in gloom. We grope like the blind along a wall, feeling our way like people without eyes. Even at brightest noontime, we stumble as though it were dark. Among the living, we are like the dead. We growl like hungry bears; we moan like mournful doves. We look for justice, but it never comes. We look for rescue, but it is far away from us” (verses 9-11; New Living Translation).

Britain hoped bright skies were ahead after voting to leave the EU. The result has been gloom. Now we grope around, stumbling and unsure of what to do!

In Hosea 5:12, God says that Ephraim (modern-day England) will be like a moth-eaten garment in the end time. God says, “I be unto Ephraim as a moth.”

“A moth-eaten garment looks good in the closet, but take it off the hanger and it falls apart,” writes Trumpet editor in chief Gerald Flurry in his booklet Hosea—Reaping the Whirlwind. “God says Britain is like a moth-eaten garment. … Even though certain things may look good on the surface, these two nations are ready to fall apart!”

Like the seemingly intact garment, the full depths of Britain’s sickness are not visible from a cursory glance. It’s clear today that Britain has fallen far from the heights of its imperial power. But many, looking on the surface, don’t understand how weak it truly is. When Britain voted to leave the EU in June 2016, many proclaimed a sunny future for Britain. Freed from the shackles of Europe, Britain could be great again.

Today, the British garment has been studied more closely. It has been taken out of the closet and shaken a little—and its truly terrible condition has been exposed. The government can’t navigate its departure from the EU without collapsing.

Other scriptures paint a similar picture. In Leviticus 26:19, God tells the descendants of ancient Israel, which includes Britain, “I will break the pride of your power.” Notice, there is still power to be broken. The nation has some strength. As far as Britain has fallen since the height of its empire, it still has some power. But it has no will, no national sense of purpose to use it. As we saw today, its political system is broken.

“One cannot think of any time in history when the standing of British politicians, either with the public at large or in the eyes of the outside world, has ever—quite deservedly—been lower,” wrote the Sunday Telegraph’s Christopher Booker this weekend. His one-time coauthor Richard North agreed, tweeting, “Today, we are seeing Parliament in its death throes. Never more has it been so obvious that Parliament is a failing institution, buoyed by an equally lacklustre media which represents another failing institution.”

Bible prophecy actually identifies a critical lack of leadership. In Isaiah 3, God says that He is removing the leadership from “Jerusalem and from Judah.” Judah refers to the Jews, and Jerusalem, as the capital city, to all of Israel, including modern Britain.

Notice, God says that He will remove “the stay and the staff.” Gesenius’ Hebrew-Chaldee Lexicon of the Old Testament defines this as “the chief persons of a nation, on whom [the people] lean.” God goes on to list the specifics: “The mighty man, and the man of war, the judge, and the prophet, and the prudent, and the ancient, The captain of fifty, and the honourable man, and the counsellor, and the cunning artificer, and the eloquent orator” (verses 2-3). In the military, in the judiciary, and especially in politics, the great leaders are gone.

This prophecy was fulfilled today! Look at the state of Britain’s government—how much prudence, wisdom, judgment do you see?

There are many more scriptures along these lines. The Bible is full of prophecies that describe God’s plan for Britain and America.

Mr. Armstrong wrote about this in his book The United States and Britain in Prophecy. This book shows God’s plan behind world events. It was Mr. Armstrong’s most-requested book, with nearly 5 million copies going out during his lifetime. With events like Brexit and the continued decline of the United States, it has proved only more true since his death. Watching your country descend into shambles is not a pleasant experience. But this book gives the hope behind these events. It explains why there is all this “groping about at noon day.” On the 33rd anniversary of his death, it remains more relevant than ever. If you have not read it before, you can request your free copy here.

And if you have read it before, I’d like to point you to a booklet that I guarantee you have not. The anniversary of January 16, the date of Mr. Armstrong’s death, has often seen historic events. Tomorrow we are releasing a brand-new booklet explaining why. Trumpet managing editor Joel Hilliker will be offering it in his Trumpet Brief tomorrow. So if you want to read a brand-new booklet, hot off the (online) press, watch this space.