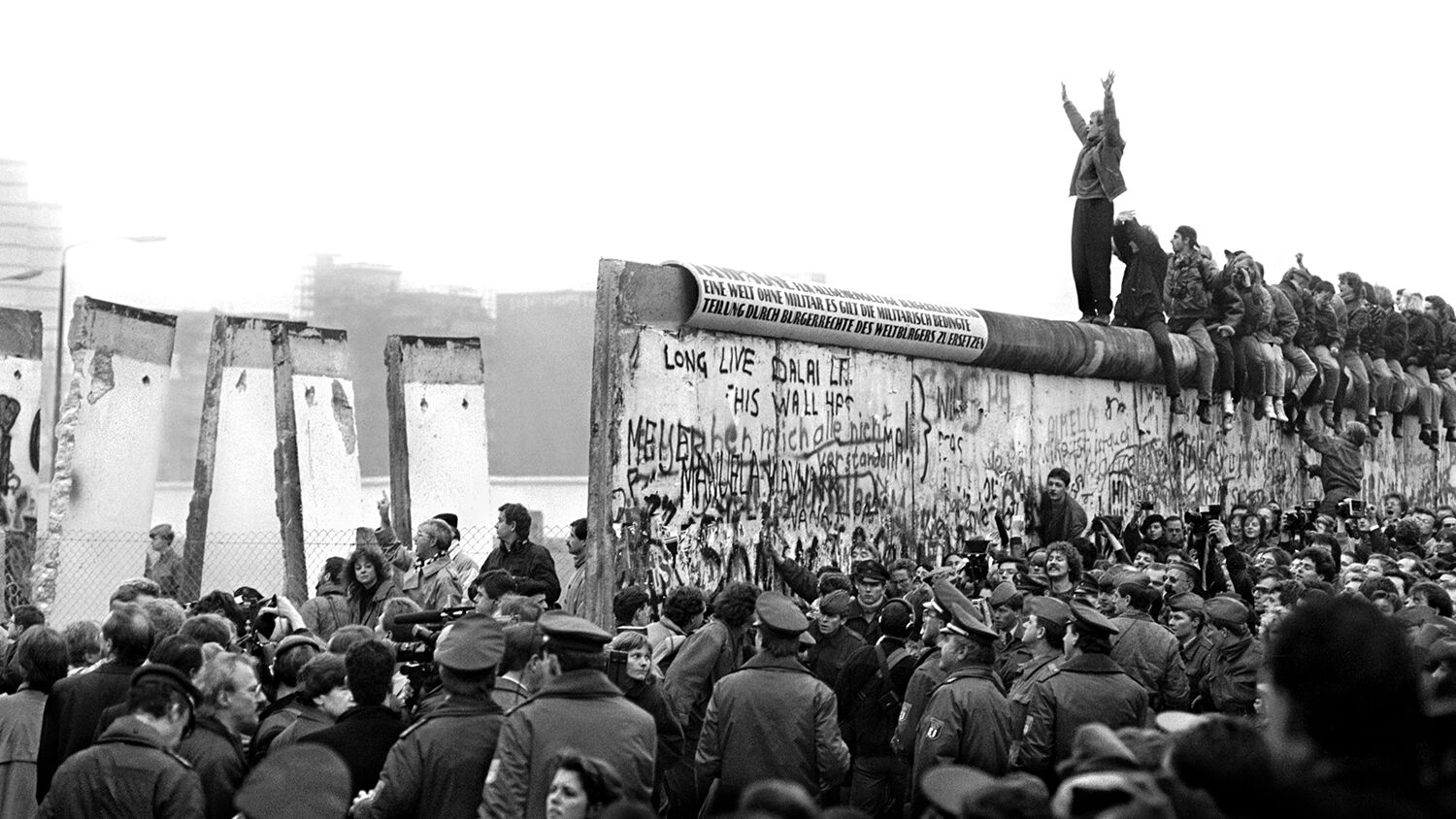 November 1989: People gather near a part of the Berlin Wall that was broken down after the Communist German Democratic Republic’s decision to open borders between East and West Berlin.
Carol Guzy/The Washington Post/Getty Images

How do East Germans really feel about their history behind the wall and their reunification with West Germany?

It has been 29 years since the Berlin Wall came down. The division between West Germany and Soviet-occupied East Germany came to an end on Nov. 9, 1989, after more than 20 years of separation. This event was viewed by the West as a victory for freedom and democracy.

Intriguingly, however, many East Germans don’t view this event as entirely positive. A Leipzig University study published in November shows that an astonishing 40 percent of East Germans think a dictator would be acceptable in certain circumstances.

That is an alarming number. East Germany was under the control of the former Soviet Union from the end of World War ii until the Berlin Wall came down. Of all people, shouldn’t East Germans despise dictatorial rule? Wouldn’t their history under Soviet oppression make them abhor dictators?

How do East Germans really feel about their history behind the wall and their reunification with West Germany? You might be surprised by the answer.

Author Christopher Hilton interviewed a number of East Germans for his 2008 book After the Berlin Wall: Putting Two Germanys Back Together Again. The majority of those interviewed had the attitude that things weren’t that bad in East Germany. In fact, many of them felt that some things were actually better under Soviet rule than they are today under the German republic.

Hilton asked former East German police officer Frank Thomas: If you had a magic wand and could go back to the fall of the Berlin Wall, what would you do with the wand?

“That’s difficult to say,” Thomas said. “The social structures that we had—the care for children and so on—they were wonderful. We had hardly any unemployed people. The doctors were free of charge. The social background for the young people was better—we had the youth clubs—all that has gone.”

A few others who were interviewed had similar sentiments. They said they missed certain aspects of their lives in East Germany before the wall fell.

“Burglaries increased,” Thomas said. “And it was completely new dealing with drugs …. We had no drugs in East Germany.” The police force in East Germany was taken over by the West after the fall of the Berlin Wall. Another former East German police officer, identified by the alias Raymond, said that police administration became more bureaucratic after reunification, which East Germans found difficult to navigate.

Many East Germans were frustrated by the fact that once reunification began, the West essentially took over. They had hoped for a more collaborative effort in reunification. Some East Germans felt that their opinions and desires weren’t really considered; it was just assumed that they would want to be like the West.

These frustrations were especially felt in the financial sector. Prof. Norbert Walter, chief economist at the Deutsche Bank Group until the end of 2009, said that 15 million East Germans had to accept a complicated bureaucratic system with which they were not familiar and for which they did not have the necessary advisers. All of a sudden, they were exposed to capitalism, and they weren’t used to it. East Germans needed tax accountants, lawyers and financial advisers to help them navigate this new world of finance, but they had limited access to these resources.

The fall of the wall brought the opportunity to buy more and more goods, as well as the opportunity to use credit to do it. Credit was uncommon in East Germany before the wall fell, so many East Germans were unfamiliar with how to use it properly. Hilton interviewed one former East German history teacher who lost her job after unification. She now works for an organization that helps the unemployed. She told Hilton that it was nearly impossible to get into debt in East Germany. Credit wasn’t readily available or used very often. After the wall fell, it was simply too much, she said. People were not able to decide what they really needed. As a result, many people struggled to cope with the new financial system and got into debt.

After reunification, many East Germans lost their jobs, their identity and their history. The educational system, particularly the subject of history, was completely taken over by the West. Again, this frustrated many East Germans. Dr. Falk Pingle of the Georg Eckert Institute for International Textbook Research said, “The publishers quickly brought out new books but they were just new editions of the ones written in the West in the 1980s, with an added chapter on reunification. It wasn’t at all representative of the idea the East Germans had of their own history. The repressive nature of the Communist regime was emphasized. … Reunification was presented as a positive thing, without mentioning the dashed hopes and dreams of the East.”

Many East Germans felt like their lives had been turned upside down. Everything they knew had changed dramatically—overnight. Some of them felt like reunification efforts had been a bit unfair. When all of their major institutions were taken over by the West, East Germans felt that “so many aspects of unification involved what appeared to be a settling of scores,” according to Hilton.

With life more complex, more uncertain and more bureaucratic than ever, some East Germans today long for the stability of the past. While they may not want to go completely back to the way things were before the wall fell, some also aren’t eagerly embracing the democracy of the West. Remember, about 40 percent of East Germans said they agreed or partly agreed that they should submit to a dictator to regain their stability. That is significant. If more than a third of the population thinks that a dictator might be OK in certain circumstances, it will be easier for a strong, dictatorial leader to take power in a time of crisis.

A former East German schoolteacher told Hilton, “Only recently we went to the cinema with the pupils to see a film about an American teacher applying fascist methods in school. The pupils think this is good and normal, a kind of experiment that works. Could this happen again, like the Third Reich? Twenty years ago, I’d have said no,” she said. “But now, I think it is possible” (emphasis added).

These comments align perfectly with Bible prophecy. History shows that the German people are often willing to throw their support behind a powerful leader. Daniel 8 prophesies that such a strongman will come on the scene in the very near future. Verses 23-25 describe him as “a king of fierce countenance, and understanding dark sentences … his power shall be mighty, but not by his own power: and he shall destroy wonderfully, and shall prosper, and practise, and shall destroy the mighty and the holy people. And through his policy also he shall cause craft to prosper in his hand; and he shall magnify himself in his heart, and by peace shall destroy many ….”

Daniel 11:21 explains that this man “doesn’t come to power the honorable way—by being voted into office,” Trumpet editor in chief Gerald Flurry wrote in November 2002. “He takes it dishonorably! He will work behind the scenes and come to power by flatteries—not votes!”

In March 1950, Herbert W. Armstrong wrote that to unite, Germany needs a “new supreme leader—the successor of Adolf Hitler—to rise up and assert himself and take command.” He repeated this warning throughout his life.

Mr. Flurry has continued to proclaim Mr. Armstrong’s warning about this coming leader. He wrote in the December 1991 Trumpet: “If a real crisis develops, will the Germans call for a new führer? Your Bible says that is going to happen! That crisis will probably be triggered by an economic collapse in the U.S.”

Mr. Flurry has also stated that this will not be a democratic leader. He writes in A Strong German Leader Is Imminent:

Many Germans want such a king—and they are going to get one. The fractured state of German politics right now provides the perfect opportunity for such a leader to arise.

This leader will bring great destruction to this Earth. But beyond the coming world catastrophe, there is also great hope in this prophecy. Daniel 8:25 says that this strong German leader will “stand up against the prince of princes; but he shall be broken without hand.” All of this prophecy is leading to the greatest event in the history of the universe—the return of Jesus Christ!

To understand more about this subject, read Mr. Flurry’s free booklet A Strong German Leader Is Imminent. This booklet explains the prophecies about this fierce king in detail and shows the awe-inspiring hope that lies just beyond the cataclysm we are facing.