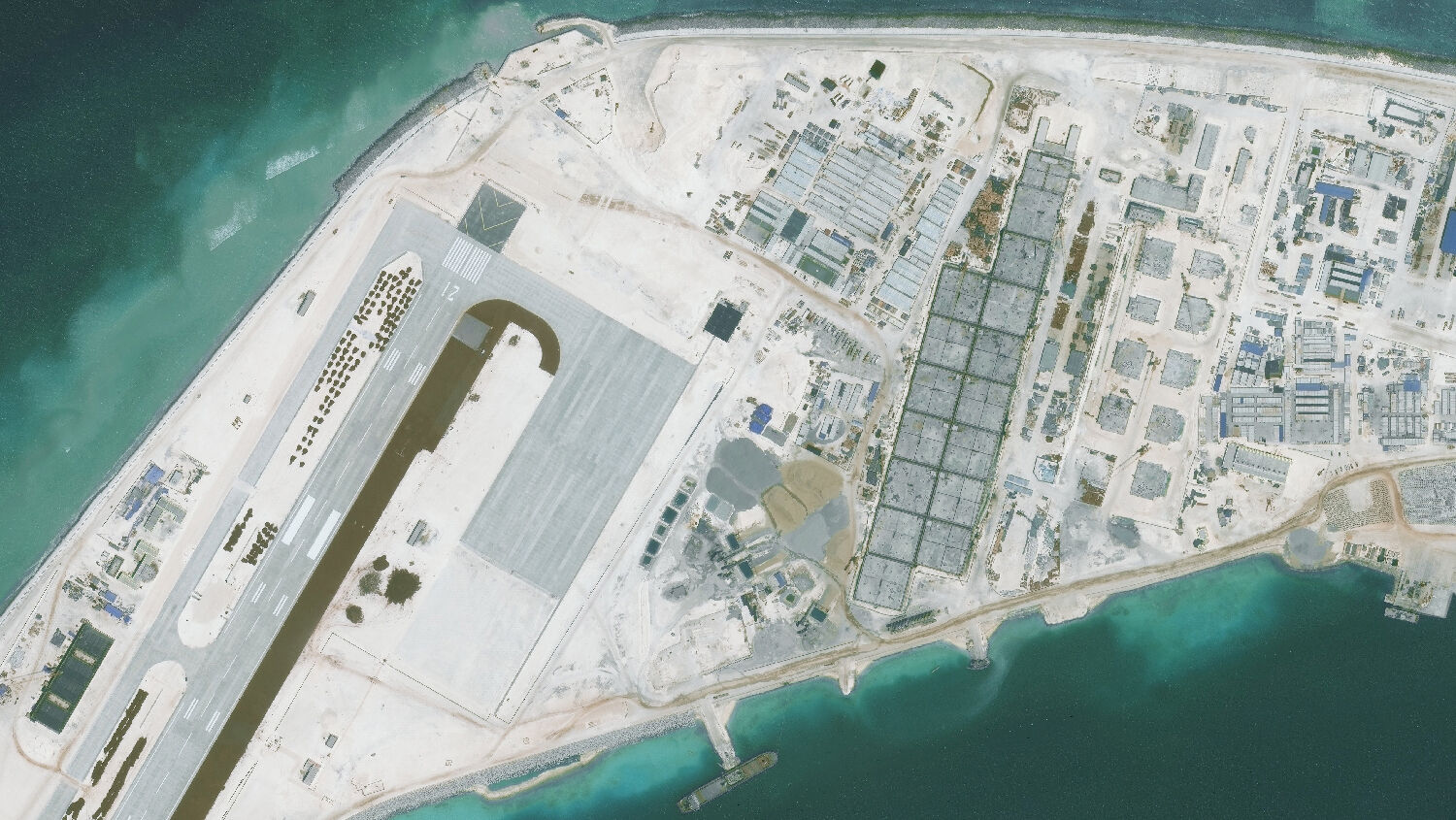 A look back on an ominous anniversary

China started building up Johnson South Reef in the disputed Spratly Islands chain in December 2013. The island, which took four months to complete, has 27 acres of land and includes a harbor. This reef was the first of several man-made islands that China has created and turned into military bases over the last five years.

The Australian Strategic Policy Institute’s analysis website The Strategist wrote the following about this anniversary (emphasis added throughout):

It has been just five years since China initiated its major land reclamation in the South China Sea, and the country has already shifted the territorial status quo in its favor—without facing any international pushback. The anniversary of the start of its island-building underscores the transformed geopolitics in a corridor central to the international maritime order.

A third of maritime trade passes through the South China Sea. By creating military bases in the middle of this key area, China ideally positions itself not only to ensure the flow of goods to and from the Chinese mainland, but also to cut off enormous amounts of trade to and from other nations, crippling their economies.

Part of the South China Sea is officially international waters, but sovereignty over the majority of it is hotly contested, with five countries claiming some part of it.

Trumpet editor in chief Gerald Flurry said in a 2015 Key of David program: “[T]he U.S. has dominated that area since World War ii. Now China is challenging them openly before the world, saying, ‘We’re going to dominate this area now.’ And nobody is stopping it.”

That was just two years after China started building these islands. Nations have had more time to come up with a response. What is the situation today? The Strategist wrote:

Consequently, China has turned its contrived historical claims to the South China Sea into reality and gained strategic depth, despite a 2016 ruling by an international arbitral tribunal invalidating those claims. China’s leaders seem intent on proving the old adage that possession is nine-tenths of the law. And the world, it seems, is letting them get away with it.

A United Nations tribunal ruled in 2016 that these islands do not belong to China. Yet the Chinese have kept building, and despite the very clear ruling, no one has done much to stop them.

Long before China began building its first island, it was making careful calculations to see if it would be able to get away with it. China’s efforts started small. First it seized Scarborough Shoal from the Philippines in 2012 and waited to see what America would do. No response. Then, China publicized its plans for man-made islands in the South China Sea and circulated them on Chinese news sites. No response. China dispatched a destroyer to one of the contested reefs for three weeks. No response.

With each of these escalations, China might have halted its efforts if the U.S. had responded with strength. Instead, the U.S. remained silent, except for the occasional gentle slap on the wrist. The Strategist wrote: “As China has continued to build and militarize islands, it has taken a calibrated approach, gradually ramping up its activities, while keeping an eye on the U.S. reaction. The final two years of the Obama presidency were marked by frenzied construction.”

China took advantage of American inaction during the Obama years to get established in this vital area. Now it has new islands holding military bases, warehouses, anti-aircraft missiles and airstrips. It would have been relatively easy to confront China back in 2012 or 2013 when it was conducting those initial tests; but now, it would probably take a full-scale war to kick China out and return things to the way they were in 2012. The Strategist wrote:

[F]rom its newly built perches in the South China Sea, China is better positioned not only to sustain air and sea patrols in the region, but also to advance its strategy of projecting power across the Indian Ocean and the Western Pacific. How can there be any hope of a free and open Indo-Pacific when the critical corridor linking the Indian and Pacific Oceans is increasingly dominated by the world’s largest autocracy?

That is an excellent point. As Jeremiah Jacques wrote in the August 2017 issue of the Trumpet, “Congratulations, Beijing. The South China Sea Is Now Yours.”

China’s moves in the region will affect everyone, not just those in East Asia. Mr. Flurry drew attention to this in a powerful article titled “China Is Steering the World Toward War” in the July 2016 issue. He explained that during World War ii, Japan wanted to control shipping through Asia, so it targeted the South China Sea, the same body of water that China now controls. Mr. Flurry wrote:

The Allied victory over Nazi Germany and Imperial Japan in World War ii was greatly aided by the fact that they controlled the world’s most strategic sea-gates, like Panama, Gibraltar and Singapore. In the decades since, however, China and the European Union have come to possess most of the world’s sea-gates.

Time will prove that this is a deadly dangerous change! …

By building artificial islands atop coral reefs in the Spratlys, and installing surface-to-air missile batteries in the Paracels, China is building a new strategic sea-gate. After passing through the Strait of Malacca, oil tankers and other ships pass between the Spratly and Paracel Islands on the way through the South China Sea.

The Bible has quite a bit to say about the importance of straits, capes and other sea-gates. In Genesis 22:16-18, God promised Abraham that his descendants would possess the “gate of his enemies.” Rebekah, Abraham’s daughter-in-law, was told, “[B]e thou the mother of thousands of millions, and let thy seed possess the gate of those which hate them” (Genesis 24:60). Those “gates” refer to sea-gates—important maritime choke points like the Panama Canal and the South China Sea.

These prophecies were fulfilled when America and Britain inherited the birthright blessings in the early 1800s. Between them, these two powers controlled every major sea-gate around the world, resulting in huge economic and military advantages.

However, America and Britain have lost their worldwide preeminence because of their national sins. The sea-gates they once controlled are in the hands of their enemies, which is exactly what the Bible prophesied. In Deuteronomy 28, God told Israel that if they didn’t obey Him, their enemies would rise above them.

Deuteronomy 29:52 describes the modern descendants of Ephraim and Manasseh being besieged “in all thy gates.” In Ezekiel 4:1-3, God told Ezekiel to warn Israel about a coming siege. However, Israel was already in captivity when Ezekiel was written. Why would he warn that nation about a forthcoming siege when they had already been besieged, lost and enslaved? Mr. Flurry points out in Ezekiel: The End-Time Prophet that Ezekiel’s warning is for the modern-day descendants of ancient Israel. He writes, “Here is pictured a siege against the house of Israel. It is a prophecy that one third of these nations will be destroyed economically and socially by a siege!”

When these prophecies were written, sea-gates were not nearly as important as they are today. At that time, most trade was conducted over land. Today, however, 90 percent of the world’s trade is by sea. In the United Kingdom, 95 percent of the products we use come from overseas, according to the Maritime Foundation. Most of our food and oil comes from overseas. That’s an astonishing amount of commerce.

Probably most of the products you own and the raw materials to make those products traveled across an ocean or a sea at some point. Whatever device you are reading this on was probably made in China. If it wasn’t, components inside it probably were, and probably traveled through a sea-gate at some point. Probably some or all of what you are wearing right now was transported across an ocean. For example, the tie I’m wearing today was made in China, and my shoes were made in Italy. One of the books in front of me was printed in the United States.

If you don’t believe me, check out marinetraffic.com. This fascinating website shows you the live location of all the ships at sea around the world right now. You can clearly see that they are concentrated at the world’s sea-gates—Gibraltar, Hong Kong, Singapore, the Panama Canal, etc.

America and Britain once controlled all of these sea-gates, but no longer. A couple decades ago, America would have responded forcefully to China’s aggressive island-building in the South China Sea. Instead, it has let China’s actions slide. America’s economic and military supremacy has slipped out of its grasp.

Prophecy is being fulfilled before our eyes. The five-year anniversary of China’s island-building reinforces that truism. It is living proof of America’s weak will.

Herbert W. Armstrong wrote about this exact situation in his book The United States and Britain in Prophecy. If you have not read that book, I urge you to request it or read it online. It explains the biblical identities of the United States and Britain, which are vital for understanding end-time prophecy. Near the beginning of the book, Mr. Armstrong wrote: “This very eye-opening, astounding identity is the strongest proof of the inspiration and authority of the Holy Bible! It is, at the same time, the strongest proof of the very active existence of the living God!”

You need to read this book. It brings the Bible alive as a book for our time right now. It describes history and current events with remarkable clarity, and teaches us about the great and majestic God whose Word never fails. The United States and Britain in Prophecy and all the rest of our literature are available here on our website—absolutely free, with no cost or obligation to you.