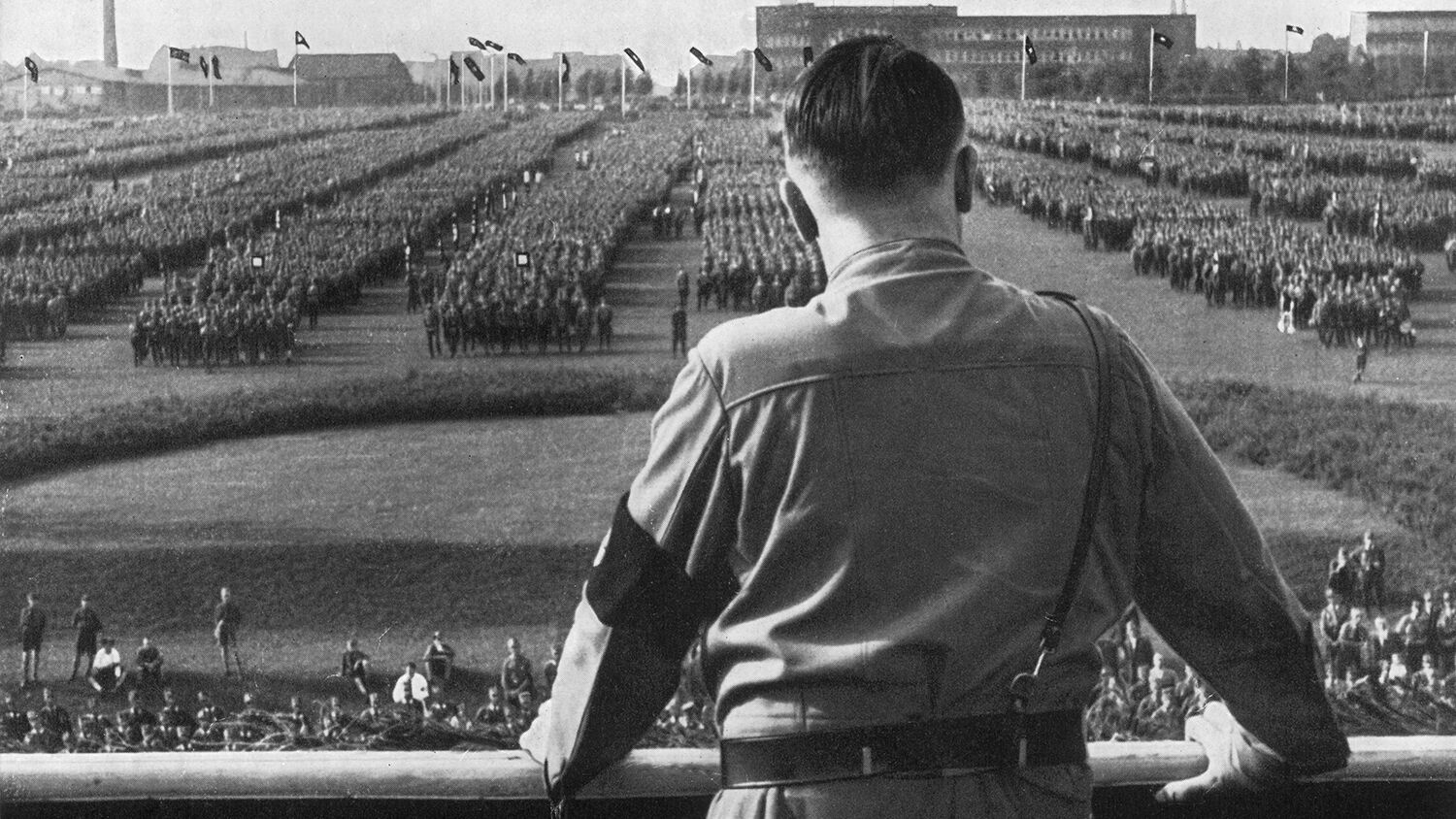 German Fuhrer and Nazi leader Adolf Hitler (1889 - 1945) addresses soldiers with his back facing the camera at a Nazi rally in Dortmund, Germany.
Hulton Archive/Getty Images

Revelation 17:10 is one of the GREATEST PROPHECIES in all the Bible!

“And there are seven kings: five are fallen, and one is, and the other is not yet come; and when he cometh, he must continue a short space.”

Who are these seven kings? They are the eras of the Holy Roman Empire. God prophesied in Revelation 13:5 that the first five of these kings would come and go over a course of 1,260 years. (Forty-two months amounts to 1,260 days by the Hebrew calendar. Numbers 14:34 and Ezekiel 4:6 establish a principle of substituting a day for a year in prophecy, which means 42 months equals 1,260 years.) From the Imperial Restoration of Justinian (the first king) in a.d. 554 to the defeat of Napoleon Bonaparte (the fifth king) in 1814 was precisely 1,260 years!

God inspired the Apostle John to write the book of Revelation hundreds of years before even the first Holy Roman Empire began. In Revelation 17, God gave him a vision that carried him forward to the sixth resurrection of that empire. The sixth resurrecton began with Garibaldi in the 19th century and culminated in the Hitler-Mussolini axis.

Why did God give John a vision of the far-distant sixth resurrection that would not emerge until about 1,700 years later? Because that is when the full meaning of this prophecy would be revealed!

During the sixth resurrection, the time when “one is,” God revealed the meaning of John’s prophecy to His servant. His servant warned of another resurrection that was “not yet come.” That servant was Herbert W. Armstrong.

Here is what my father writes in Prophesy Again: “This revelation is about the period when Mr. Armstrong, God’s end-time Elijah, was doing this work of God. … During World War ii, we saw the Hitler-Mussolini axis, but then it disappeared from the scene. It ‘was not’! And yet, God says, ‘it is’! The Axis powers lost the war, but as Mr. Armstrong preached time and again, they just went underground—into ‘the bottomless pit’ (verse 8). They’re still there—they’re just underground.”

Verse 10 is not just about the last two resurrections of the Holy Roman Empire. It’s also about the last two eras of God’s Church! God revealed the full truth about this prophecy through Herbert W. Armstrong, the same man He used to lead the sixth era of God’s Church (Revelation 3:7-13). Mr. Armstrong warned about the seventh and final resurrection, but the seventh head did not ascend out of the bottomless pit until after Mr. Armstrong died in 1986!

Revelation 17:10 is the heart of prophecy for our time today!

The Feebler Sixth Head
Another fascinating detail in this prophetic passage is the way God characterizes the sixth head of the beast in verse 8—it “was, and is not.” The reason for this description is because the Hitler-Mussolini axis “was not in any sense the power-wielding old Roman Empire,” Mr. Armstrong wrote.

We tend to think of the sixth head of the beast as being much worse than the previous five resurrections because of the widespread carnage it ignited. Due to the destructiveness of modern warfare, this sixth resurrection of the Holy Roman Empire caused the deaths of about 65 million people. But in terms of a world-ruling empire ascending out of the heart of Europe, the Hitler-Mussolini axis was actually quite feeble and short-lived compared to the previous five resurrections.

Hitler’s regime did not conquer the world. He conquered Europe for about four years. But he never conquered Britain. And once his ally, the Empire of Japan, bombed the United States into the war, Hitler’s war machine was no match for America’s industrial might.

God knew the sixth head of the beast would be meager and insignificant, comparatively speaking, because it would ascend out of the bottomless pit at the very time America and Britain together would reach their peaks in power. This involves yet another breathtaking prophecy in your Bible (Genesis 35:10-11).

It was the descendants of biblical Ephraim (the British Empire) and their European allies who vanquished the fifth head of the Holy Roman Empire, driving Napoleon into exile in 1814. Napoleon attempted a comeback the following year and was crushed by the British at Waterloo. As British historian Paul Johnson writes, “Waterloo was one of the most decisive battles of history and brought to an end the entire Revolutionary and Napoleonic period.” It was decisive because the 1,260 years that enclosed the five that are fallen had ended!

Then in the 1940s, it was the modern descendants of the biblical brothers Ephraim and Manasseh (Britain and the United States) who crushed Hitler’s dream of dominating Europe and then the world!

Just think about the detail of this stunning prophecy!

The Seventh Resurrection
Over the past 200 years, the Holy Roman Empire has once again been at a historical low. But now it is emerging out of the pit once again. The seventh resurrection is now taking shape. The European Union today is an oversized group of 28 nations, but it is about to downsize to 10 nations or groups of nations. Revelation 17:12 says, “And the ten horns which thou sawest are ten kings, which have received no kingdom as yet; but receive power as kings one hour with the beast.”

That is referring to a “United States of Europe” led by 10 kings, who are of one mind (verse 13). Those 10 kings or heads of state will be led by one fearsome leader, prophesied in Daniel 8.

Mr. Armstrong predicted that a united Europe would arise out of crisis under the leadership of a strong German leader. He wrote in the November-December 1954 Plain Truth: “Germany inevitably [will] emerge as the leader of a united Europe. It will require some spiritual binding force to inspire this confidence—to remove these fears—and that spiritual binding force must arise from inside Europe! All Europe is actually ready—just waiting for the confidence-inspiring leader ….”

That seventh resurrection is rising right now. It’s just waiting for that strong, confidence-inspiring German leader to unite Europe into a single power. As Mr. Armstrong wrote, that confidence and unity can come only from a spiritual binding force.

My father wrote in the October 2018 Trumpet: “Bible prophecy makes clear: Soon, Europeans will get exactly what they are asking for, another Charlemagne-type leader. This man will come to power and set himself up as a strongman over all Europe. He will effectively hijack the European Union! … Regardless of who the strongman is, it is clear that we are seeing a revival of the Holy Roman Empire in Europe in a way that has not been promoted before. … When this man comes to power, it will affect every human on this Earth in the most horrible ways—unless God protects you! But God only protects those who repent.”

We are facing the worst crisis in mankind’s history. In the past, when Europe has been led by a strongman, allied with the Vatican, it has plunged the Continent and even the world into war. But there is also great hope in these prophecies. The same Bible that accurately forecast the last 1,500 years of European geopolitical and religious history, as well as the current resurrection of the Holy Roman Empire also forecasts that this resurrection will be the last one!

Notice the conclusion of my father’s article: “We cannot predict or set dates; only God the Father knows the day or the hour (Matthew 24:36). But God warns us that we had better know when it is at the door! (verse 33). We must be watching and praying.

“The great hope of all of this is that just beyond that time of tribulation is the greatest, most inspiring event to ever take place.”

We have been proving the prophecies of Revelation 17. We have seen how they came to pass, from a.d. 554 to A.D. 2018, in fearsome, violent, living color. The Bible prophesies that the next resurrection of the Holy Roman Empire will wreak even worse destruction in even less time. Other prophecies in the Bible specify that this “time of tribulation,” because it is so destructive, continues for an even shorter period than the Hitler-Mussolini axis.

But notice Revelation 17:14. “These shall make war with the Lamb, and the Lamb shall overcome them: for he is Lord of lords, and King of kings: and they that are with him are called, and chosen, and faithful.”

The seventh resurrection of the Holy Roman Empire will be the shortest resurrection—and the last resurrection. Why? Because the Lamb, Jesus Christ, will smash it! This evil empire, this combination of a false church and a beastly state, will finally be destroyed permanently, never to be resurrected again. The Bible prophesies that Jesus Christ will then establish His government on Earth.

What a powerful, sobering but hopeful vision is contained in Revelation 17. Six kings have now fallen. One is about to come. He will continue, but only for a short space.