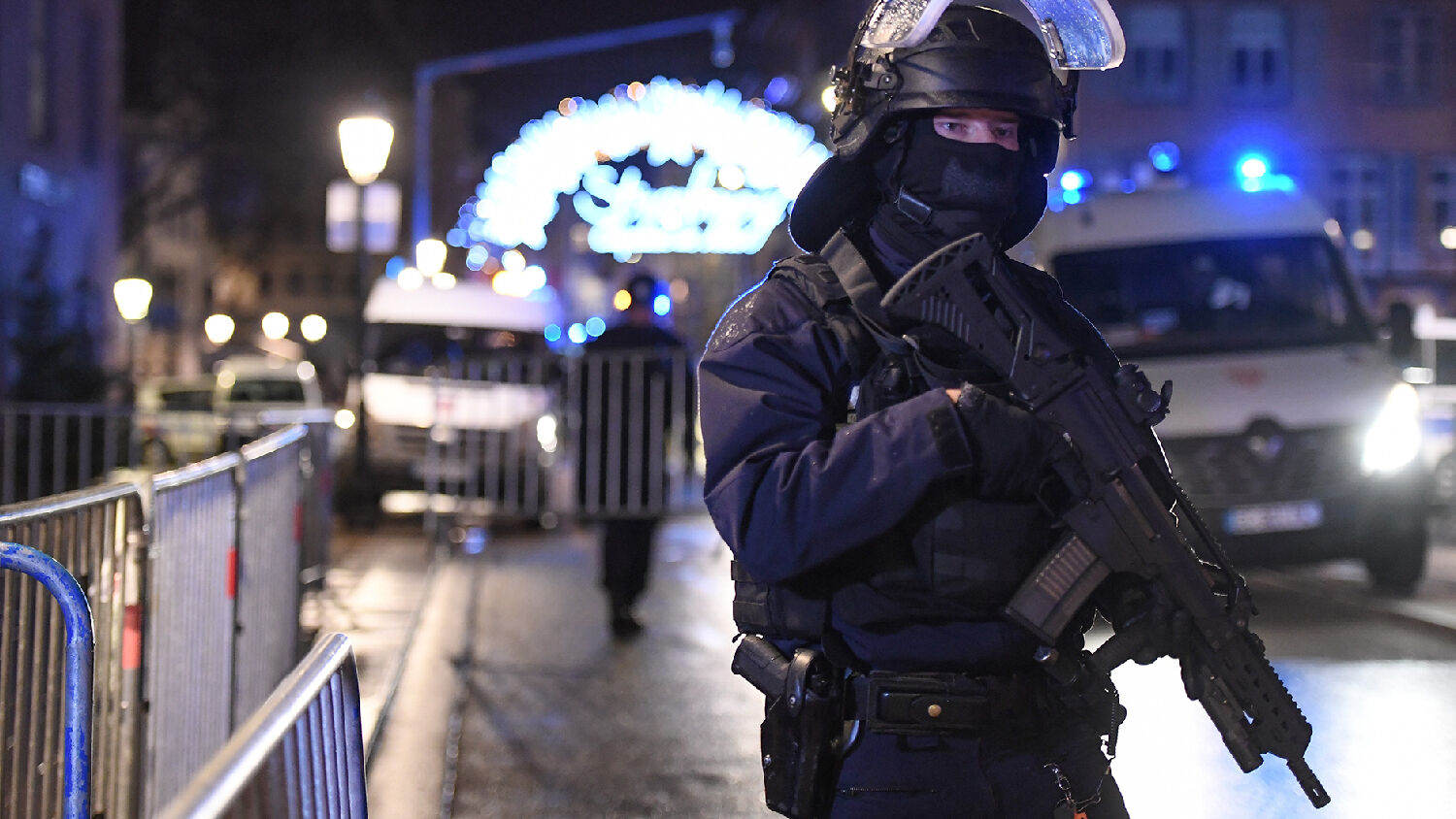 A police officer stands in the streets of Strasbourg, eastern France, after a shooting breakout, on December 11, 2018.
FREDERICK FLORIN/AFP/Getty Images

Once again, a murderous attacker shouts ‘Allahu Akbar’ at a European Christmas market.

An Islamist terrorist is still on the loose after killing at least two people and wounding 13 in the French border city of Strasbourg. One of the wounded is brain-dead, and another six are in critical condition.

Strasbourg is home to the oldest Christmas market in France, dating back to 1570, which attracts 2 million visitors each year. At 8 p.m. yesterday, 29-year-old Cherif Chekatt entered the market’s secure zone, armed with an automatic pistol and a knife. He began attacking people, apparently at random. He then took a taxi driver hostage and fled. French authorities say that he may have crossed the border into Germany.

The attack caused massive disruption. A few miles away, the European Parliament building was locked down with members of Parliament, officials and journalists locked inside. Across the city, thousands of others had to stay put, including 5,000 spectators stuck at a basketball game until 1 a.m.

Eyewitnesses reported that Chekatt shouted “Allahu akbar” as he opened fire. Islamists have a history of attacking Christmas markets. In 2000, a well-developed plan by al Qaeda to attack the same Strasbourg market was uncovered and stopped. Two years ago, an Islamist terrorist killed 12 and wounded 56 in an attack at a Christmas market in Berlin.

In 2015 and 2016, Islamist terrorists killed more than 200 people in France, including (but not limited to) a mass shooting at a satirical magazine; shooting, grenade and suicide bombing attacks at restaurants, bars, concerts and a soccer stadium; and a 21-ton truck ramming hundreds of people. Yesterday’s attack has reminded the nation that Islamist terror is still very real.

The attack comes amid growing anger in France and across Europe. The protests in France over the last month were triggered by environmental taxes. But the protesters’ grievances go far beyond that. The protesters are a diverse group with many grievances, but one of them is against lax immigration laws that have allowed terrorists to come into the country.

This attack took place within the secure area of the Christmas market. France is already on a high level of alert. Just this summer, it unveiled a raft of measures designed to stop such attacks. This included improvements to France’s domestic spy agency, an organization to monitor released prisoners who may have been radicalized, and an anti-terror prosecutor with nationwide jurisdiction. These came after an earlier set of anti-terror measures in October 2017. Yet these measures did not stop Chekatt from terrorizing Strasbourg. This will not boost confidence in the French government at this time of public anger.

The Bible reveals that some major changes are coming to European politics. Revelation 17 describes “ten kings” who submit to one overall king. Many of the French protesters who have been marching in the streets, burning cars and smashing windows recently are angry not just over a fuel tax but with all politicians and with France’s entire political system. They want a new system—and the Bible says that a new system is coming. As editor in chief Gerald Flurry explained in the latest issue of the Trumpet:

The inability of the current system and the current leader to stop terrorist attacks like yesterday’s killings in Strasbourg is opening the door for someone to take power and wield a lot more authority. Daniel 11 prophesies that a clash is coming between a “king of the north” and a “king of the south.” As Mr. Flurry’s free booklet The King of the South explains, “the king of the north” refers to Europe, led by Germany, and “the king of the south” refers to radical Islam, led by Iran. Since the early days of our publication in the early 1990s, we have been forecasting a massive, violent confrontation between Europe and radical Islam.

Ongoing terrorist attacks in Europe are leading to the fulfillment of both of these prophecies.

For a more in-depth look at this prophetic trend, read “Why the Trumpet Watches Iran and Europe Heading for a Clash of Civilizations.”