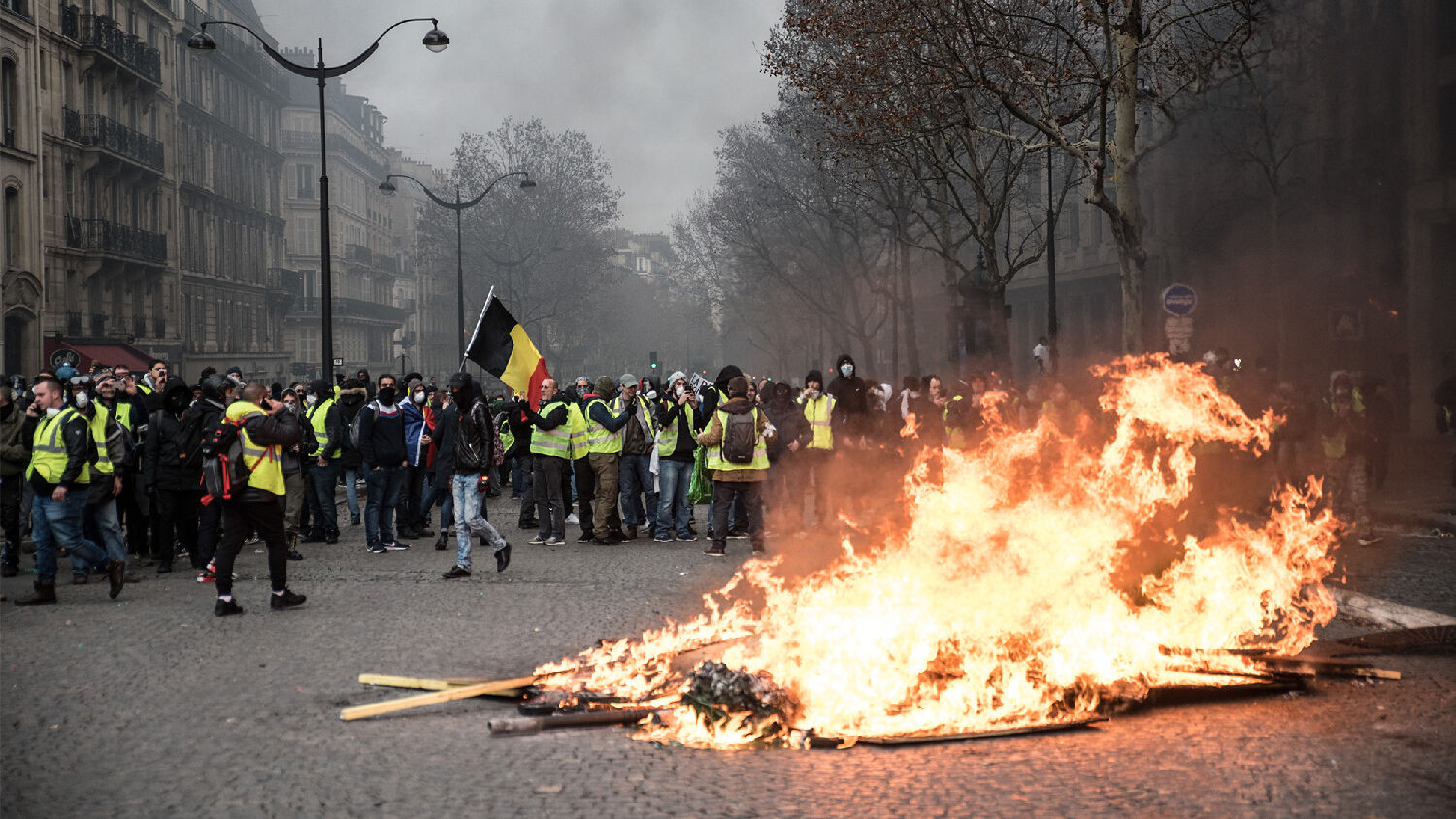 The political crisis that has been building in Europe over the last decade is more visible than ever.

France is suffering its worst protests since the 1960s. Over 100,000 took to the streets in France to protest for the fourth weekend in a row. The police tried to round up the likely troublemakers, arresting more than 1,000 early Saturday morning. Businesses shut down and boarded up their windows during one of the busiest shopping weekends of the year. Police and firefighters deployed in huge numbers, armed with water cannons, tear gas and even assault rifles.

It reduced the violence, but didn’t stop it. Protesters still burned cars and smashed shop windows once again.

Nor was the violence confined to France. In Belgium, police fired water cannons at around 1,000 protesters. Four hundred were arrested. There were also smaller protests in the Netherlands.

French President Emmanuel Macron has opened the government purse to try to placate the protesters. Yesterday, he promised around €10 billion (us$11.3 billion) of tax cuts. The same day, a survey revealed that business owners expect the protests to cut this quarter’s economic growth in half. France is already one of the more indebted nations in the European Union. This is a setback it cannot afford.

The tax cut is unlikely to satisfy anyone. Though it may take them off the streets, for now. But as the Times noted this morning, “The demands of the protesters have grown more radical as the weeks have passed. Many are calling for the overthrow of Mr. Macron and a new political system to be introduced.”

They are not requesting a couple of policy changes. They want a revolution.

“I didn’t want this completely corrupt political class anymore,” one protester told the Wall Street Journal. “We’ve had the left; we’ve had the right. We’ve had everything, and it’s the same policy. You have the sense that there’s no democracy anymore.”

This rejection of the whole system is reflected in the graffiti and slogans used. “Don’t vote, all rotten,” reads one. “Neither Macron, nor Marine,” reads another, referring to the French president and Marine Le Pen, his extremist rival.

This is not Macron’s problem. As Jonathan Miller noted in this week’s Spectator:

His ejection from Olympus arrives at a time when the UK is in the EU endgame, and the community is rattled. Jean-Claude Juncker called off a trip to Paris this week. France, its economy hobbled by an overvalued euro, now joins Spain, Italy, Germany and Belgium in a state of social or political crisis or both.

This background of anger manifests itself in different ways in different countries. Just last week, a far-right party entered a regional parliament for the first time in Spain’s democratic history. Spain was a dictatorship until the late ’70s, and this history had made it immune to the rise of the far right that we’ve seen across Europe. Not anymore. A new party, Vox, won 11 percent of the seats, and it is on target to easily enter the national parliament when elections are held.

Faced with this Continent-wide anger, Germany’s ruling party, the Christian Democratic Union (cdu), met on Friday to choose its course for the future and its new leader.

It chose more of the same.

It was a very close choice. But Chancellor Angela Merkel’s handpicked successor, Annegret Kramp-Karrenbauer, won 51.8 percent of the vote. While not identical to Merkel, she has a similar vision for Germany and has been nicknamed by some “mini-Merkel.”

Merkel will continue in her job as chancellor for now, with Kramp-Karrenbauer taking over if the cdu wins the next national elections, scheduled for 2021. What is left of Ms. Merkel’s chancellorship still relies upon an unstable coalition, so she certainly is not safe. But as the Guardian put it, had the rival candidate won, “the pundits would now be asking how long he would need to topple Merkel. Now they are asking how long [Kramp-Karrenbauer] will be able to keep Merkel in power.”

Germany’s politics are in turmoil. According to some polls, the Social Democratic Party—which is traditionally Germany’s main left-wing party and one of the top two parties in the nation—is in fourth place. The latest insa poll put the far-right Alternative für Deutschland (AfD) at 15 percent of the vote and the far-left Left Party at 10 percent. One in 4 Germans wants to vote for these radical, smash-the-system groups.

Facing all this turmoil, the cdu voted for more of the same. How will Germany respond?

In 2016, theTrumpet.com managing editor Brad Macdonald and I wrote on German leaders’ refusal to change course on the migrant crisis. “Think about the consequences of German officials’ deception,” we wrote. “It is destroying the trust between Germany’s government and the public. What happens when the majority of Germans realize they have been deceived? What happens when the majority of Germans lose confidence and trust in mainstream leaders? Frustrated and angry, the German people, as any people would, will seek an individual, a political party, willing to heed their concerns and solve Germany’s migrant crisis. This trend is already evident in the dramatic rise of pegida and the AfD, a right-wing political party whose popularity is at all-time highs.”

Two years on, Germany’s leadership refuses to listen to these concerns. You see the same trend all across Europe. But now it’s not just about migrants. It’s about the economy. It’s about carbon taxes. It’s about feeling powerless.

The angry crowds across Europe don’t have a clear vision of what they do want. But they know they’re not happy with the status quo, and the existing democratic process shows no sign of fixing their problems.

Hence the growing anger that is directed not at one person, policy or party but at the entire system.

“The Merkel government’s handling of this situation is turning the German people into a ticking time bomb!” we wrote in 2016. “The more disillusioned, frustrated and angry the German people become, the more vulnerable they will be to radical politics and radical leaders with radical solutions.”

Now Europe itself is a time bomb. And by ignoring it, Germany’s cdu is only going to make the resulting explosion worse.

The smash-the-system anger that has erupted in Paris over the last month will break out elsewhere, and it will get worse.

The Bible reveals that an entirely different system of government is coming to Europe. Revelation 17 describes “ten kings” who submit to one overall king. As editor in chief Gerald Flurry explained in the latest issue of the Trumpet:

Daniel 11:21 says that this leader will not be given “the honour of the kingdom” but shall instead come in “by flatteries.” It’s describing someone who comes to power in an unusual, even illegitimate way. He’s not voted into office through the normal channels.

Revelation 17 describes Europe being led by a “great whore”—biblical symbolism for a false church.

A strong leader, who is not elected, a continent led by a church—these are big changes for Europe. But Europe has been here before, time after time after time. Most people think Europe is too “modern” to go back to its Holy Roman Empire-style of government, but those people are probably also shocked to see the anger burning in Paris and the strong calls for revolution in France and beyond.

“Current conditions in Europe, including the refugee crisis and the turmoil in German politics, provide probably one of the greatest opportunities ever for a new leader to come into power ‘by flatteries,’” wrote Mr. Flurry. “Chancellor Merkel is on her way out and is now a lame duck. Expect political and social crises in Germany and Europe, and public resentment and anger, to grow even deeper.”

If you have not already, be sure to read Mr. Flurry’s cover article “Germany—A New King Is Imminent.” It gives you the prophetic background you need to understand the tumultuous news coming out of Europe. It shows where these events are leading. And it shows you how these events fit in with God’s plan for the whole world.