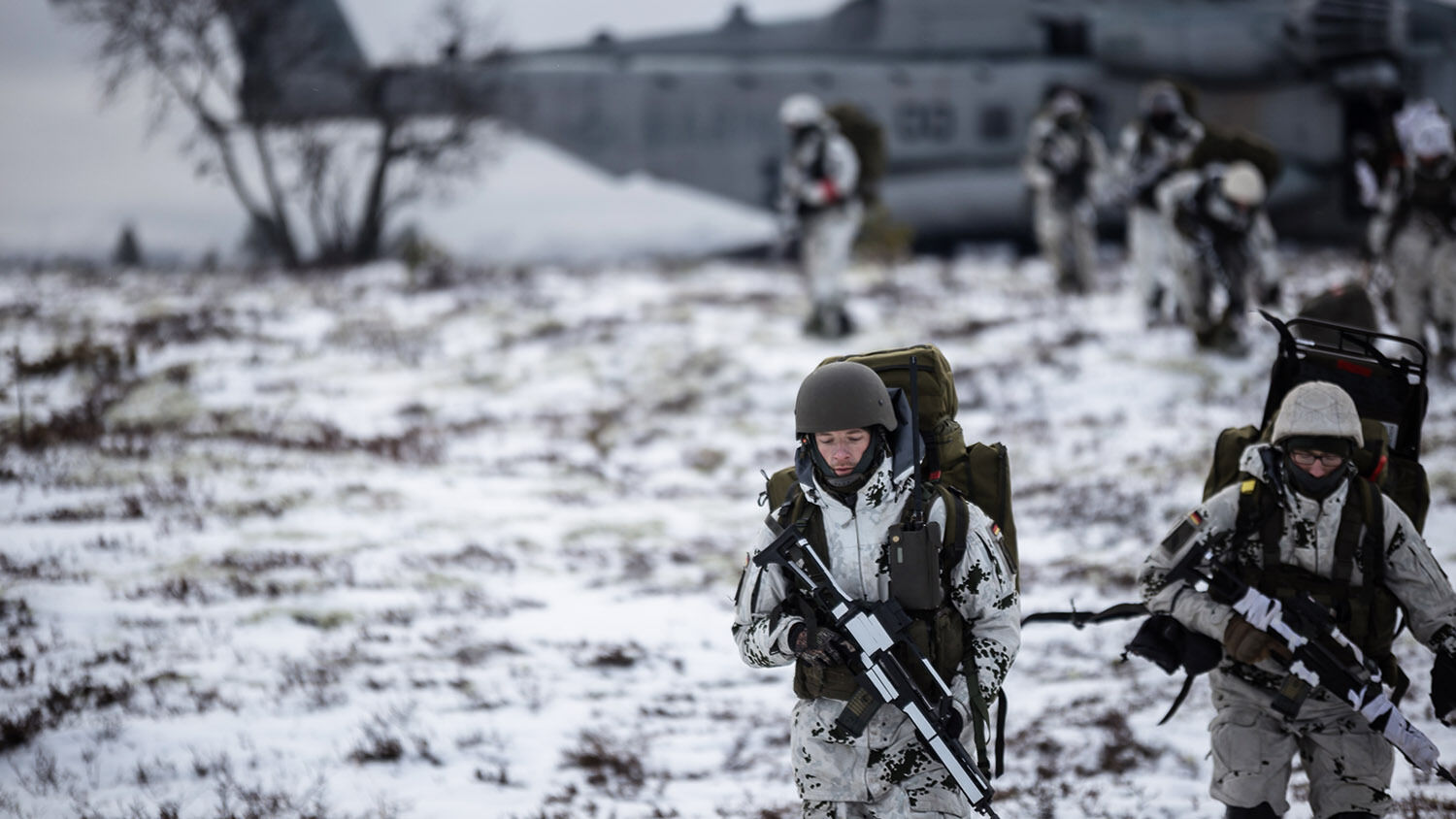 Nato kicked off its largest war games since the Cold War in Norway from October 25 to November 7. At the heart of these exercises was Germany.

The Trident Juncture 2018 military exercises involved around 50,000 military personnel from all 29 nato countries and simulated nato’s response to an invasion of Norway by a “fictitious aggressor.”

The choice of Norway for these exercises is deliberate. In any conflict between Russia and Europe, access to the Atlantic Ocean is essential. During the Cold War, strategic planners believed that Russia would want to shut down Atlantic shipping into Europe. One of the easiest ways to do that is with long-range bombers. And these bombers would have to travel close to Norway. nato fighter jets stationed in Norway would be in the perfect position to intercept them.

nato planners believed that if the Soviet Union invaded Western Europe, it would also launch a smaller invasion of Norway in an attempt to seize nato air bases. Such an attack would most likely come in the middle of winter, when the Soviets’ experience in cold conditions would increase their advantage. The nato strategy for this hypothetical invasion included a rapid response in Norway to block Russia, and thus keep the East Atlantic safe for European shipping.

Trident Juncture rehearsed exactly this scenario. There was even a smaller, precursor exercise by United States Marines in Iceland, another strategic location for controlling the North Atlantic.

“To me, Trident Juncture 2018 seems to be replaying scenarios from more than 30 years ago,” wrote Geopolitical Futures founder George Friedman. “The exercise’s participants mean to see if they can secure Norway and block Russian bombers from penetrating the Atlantic.”

The U.S. played an important role in these exercises. But so did Germany. The U.S. made the largest troop contribution: 12,000 personnel. Norway contributed 6,500. Germany sent between 4,000 and 8,000, depending on which count you believe, making it the second- or third-biggest contributor to the exercises. These were accompanied by 2,000 German vehicles—around one fifth of the total.

This … will be an opportunity for German forces in particular to show their capabilities before they assume the command of the Alliance’s Very High Readiness Joint Task Force in 2019. For that year, German forces will be at the tip of nato’s spear.

“Why Is Germany Beefing Up Its Military?” is the type of headline you would have seen in rare places besides the Trumpet a few years ago. Now it’s in the bbc. Important changes are afoot in Germany.

Herbert W. Armstrong forecast these changes right from the end of World War ii. He said that Germany would rebuild—and that rebuilding would include its military. Describing his 1953 visit to Europe in his autobiography, he wrote:

The Marshall Plan and American dollars had not yet made progress toward restoration. Europe was laid waste, many of its cities in ruins. Almost no one believed, then, that Europe could ever rise again. Yet I had been persistently proclaiming for two years, over the air and in the Plain Truth, that Germany would once again come to economic and military power, heading a 10-nation resurrection of the Roman Empire.

Now Germany is the top European military at nato’s largest military exercises since the 1980s.

Mr. Armstrong made these prophecies based on the Bible. Revelation 17 and 18 describe a “beast,” a symbol of a great empire. The beast has seven heads, symbolic of seven successive resurgences.

Revelation 17:10 makes this clear: “And there are seven kings: five are fallen, and one is, and the other is not yet come.” In other words, this empire has seven phases. Each head symbolizes a different ruler or dynasty. These dynasties come one after the other.

This prophecy also tells us that during the sixth head, when “five are fallen and one is,” God would reveal this prophecy. Throughout Mr. Armstrong’s ministry, he explained this Bible prophecy about the beast power and what these seven heads mean. After that sixth head was destroyed in 1945, he warned that the seventh head would come. Through decades in which Germany was militarily weak (not to mention cut in half and Target No. 1 of Soviet Russia), Mr. Armstrong maintained the same forecast. Now that seventh resurgence is visible on the bbc.

Germany has a complicated relationship with both nato and Russia. As Trumpet editor in chief Gerald Flurry exposed in his September cover article, “Germany and Russia’s Secret War Against America,” Germany is actively working to undermine nato and drawing closer to Russia.

At the same time, Germany still ekes out benefits from nato, and it still fears Russia, especially in the long term.

Germany is using nato to help prepare its own military—particularly for rapid attack capability. The nato exercises emphasize a quick response to block a Russian invasion. The spearhead force that Germany will be leading next year focuses on moving quickly. Germany will also host a new nato headquarters focusing on rapid troop movement. But, as Deutsche Welle noted, the new headquarters “will not be integrated into the current nato command structure.” Instead, it will be established under German sovereignty.

This focus on rapid movement fits perfectly with history and Bible prophecy. In Habakkuk 1:6, this coming European power is referred to as a “bitter and hasty nation.” Lange’s Commentary describes the word “hasty” as “properly hurrying on, rushing on precipitately.” Verse 8 says, “Their horses also are swifter than the leopards,” describing in prophetic language their speedy modern military. Deuteronomy 28:49 describes the same attack style, saying that this nation’s military is “as swift as the eagle flieth.” Daniel 11:44 describes this same power responding with “great fury” to rumors out of the north and east—from Russia and China.

Previous incarnations of this European power had the same tendency. The fifth head of the Holy Roman Empire was led by Napoleon Bonaparte. David Chandler wrote in his book The Campaigns of Napoleon that “insistence on speed and mobility was a basic feature of the emperor’s campaigns from beginning to end.” The famous Prussian strategist Karl von Clausewitz analyzed Napoleon’s strategy in his book On War, and the German Army inculcated these lessons. They applied this same style of rapid attack with more modern weapons in World War ii. It was this same strategy that was used to great effect the last time German forces invaded Norway.

The same speedy army is preparing right now. Yes, there are important changes this army needs to make before it’s capable of projecting power beyond its borders. But just yesterday, France’s finance minister said that Europe must become an “empire.”

“Europe cannot be shy any longer about using its power,” he said.

Today, German Chancellor Angela Merkel said, “We should work on the vision of one day creating a real European army.” She was responding to Emmanuel Macron’s call last week—a call Trumpet editor in chief Gerald Flurry discussed in depth at his Personal Appearance Campaign in Columbus, Ohio, on Sunday.

This European military power that Herbert W. Armstrong warned about could form very quickly. Europe has already taken important steps toward forming a military behind the scenes.

You need to understand this power and the effect that it will have on your life. Mr. Armstrong’s free book Who or What Is the Prophetic Beast? goes through the Bible’s prophecies of this coming power and shows how they apply to modern Europe. And theTrumpet.com managing editor Brad Macdonald’s book The Holy Roman Empire in Prophecy shows how these prophecies have been fulfilled throughout history—and what is still to come. You can read this material online, but we’re also more than happy to send you your own free copy.