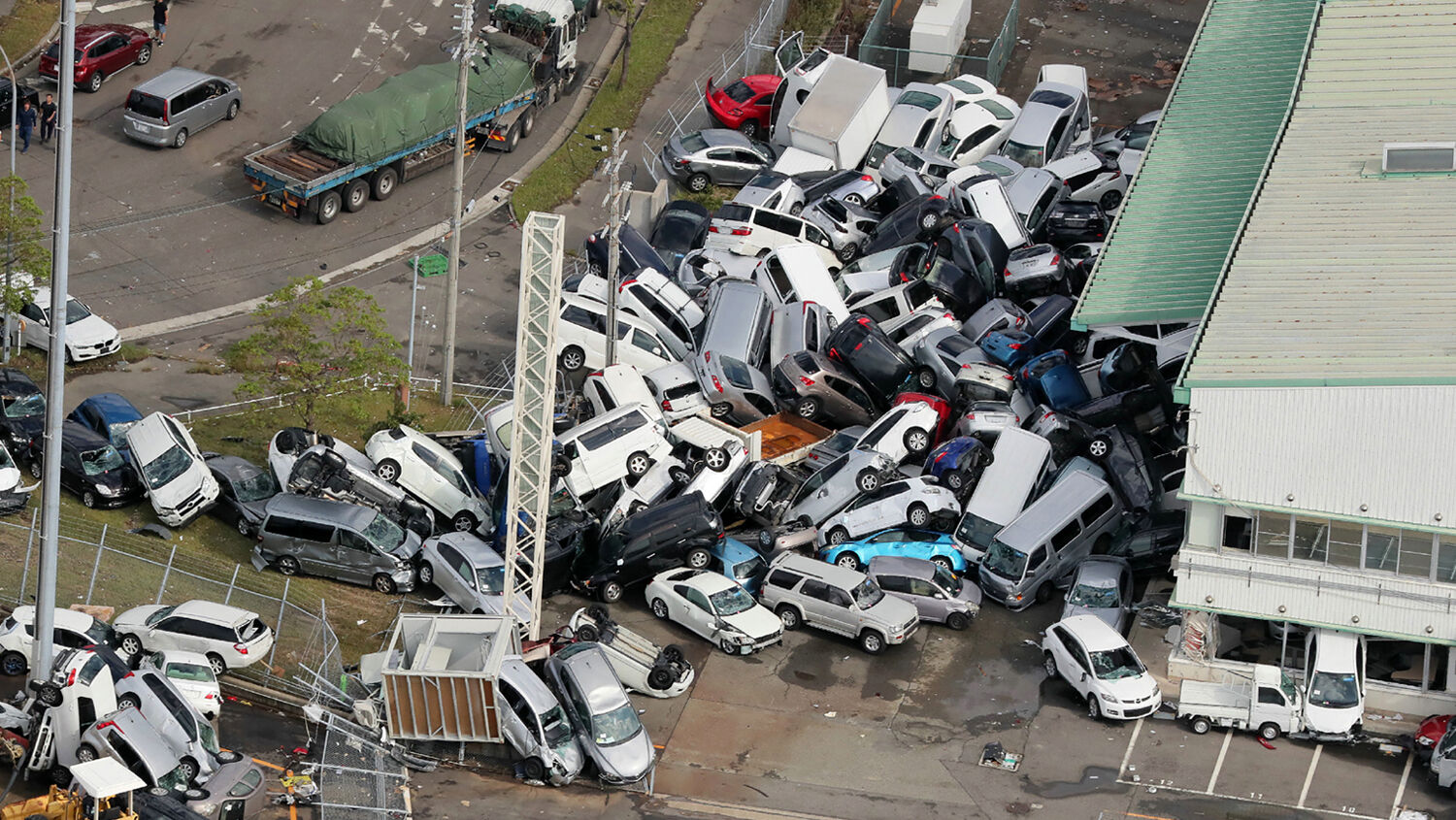 Vehicles are piled into a heap due to strong winds in Kobe, Hyogo prefecture, on September 5, after Typhoon Jebi hit the west coast of Japan.
JIJI PRESS/AFP/Getty Images

Typhoon Jebi, the worst storm to make landfall in Japan in a generation

A massive typhoon slammed Japan’s western coast on Tuesday, killing at least 10 people and injuring more than 400. Typhoon Jebi has carved a trail of devastation through the middle of Japan, bringing heavy rains and winds of up to 135 miles per hour. About 1.2 million people in western and central Japan were advised to evacuate before the storm hit. In some areas, nearly 20 inches of rain fell in 24 hours.

Many people affected by the typhoon have shared dramatic footage of the destruction on social media. Videos show the storm’s high winds overturning moving vehicles on roads and bridges. Heavy winds blew the roof and siding off several large buildings. The winds also drove a 290-foot-long tanker from its moorings and into a bridge. One video showed a 328-foot Ferris wheel in Osaka spinning on its own because of the high winds.

With gusts of up to 110 mph, Typhoon Jebi has killed at least 8 people and injured many more. pic.twitter.com/LVE4dgp8gp

Just got this video from my friend in Osaka #TyphoonJebi #japan pic.twitter.com/eTSWdIqBmi

In Japan’s Hyogo region, around 100 cars in one dealership were engulfed in flames caused by an electrical short from rising seawater. In a train station in Kyoto, part of the roof collapsed onto the concourse, narrowly missing commuters. Giant waves pounded the Japanese coastline, flooding coastal areas with seawater. Photos and footage from the affected regions show downed power lines, fallen tree branches and widespread debris. By Tuesday evening, more than 1.6 million people were without electrical power.

Air, land and sea transportation have ground to a halt in much of the country. More than 700 flights have been canceled because of high winds and flooded airports and runways. Train service has been suspended in many regions. Many roads are not safe to drive on because of flooding and debris.

One of Japan’s largest airports, Kansai International, is closed indefinitely because of the storm. The airport is built on an artificial island off the Japanese mainland, and the island is almost entirely flooded. The bridge connecting the island to the mainland is also damaged. About 3,000 people were stranded in the airport overnight, waiting for boats to take them off the island to another airport. On Wednesday morning, some stranded passengers were shuttled to the mainland in buses over the undamaged part of the bridge.

The storm is the worst to hit the Japanese mainland since 1993, with tides in some areas the highest since a typhoon in 1961. This has already been a year of serious weather disasters for Japan. This summer, another typhoon brought heavy rains that caused widespread flooding in the country’s western region, killing more than 200 people. On June 18, a 6.1-magnitude earthquake hit Osaka during the morning rush hour, killing five people. Since then, the country has been facing a record heat wave that has caused dozens of deaths. Many areas of Japan have had temperatures over 100 degrees Fahrenheit for weeks.

Japan is not the only country that has been affected by several major natural disasters this year. Nations across the globe have suffered massive earthquakes, hurricanes, typhoons, volcanoes, floods and wildfires. These days, disasters that are labeled the “worst ever,” “worst on record” and “worst in history” have become all too common.

This increase in severe disasters was actually prophesied in the Bible. In Matthew 24, Jesus Christ’s disciples asked Him what signs would indicate that His Second Coming was near. One of the signs that Christ gave them was environmental disasters: “For nation shall rise against nation, and kingdom against kingdom: and there shall be famines, and pestilences, and earthquakes, in divers [different] places” (verse 7). Christ specifically singled out an increase in natural disasters as a sign that His Second Coming would be imminent.

In the next verse, Christ told His disciples, “All these are the beginning of sorrows.” We can expect natural disasters like Typhoon Jebi to increase in frequency and destructiveness.

The Bible tells us that weather can be both a blessing and a curse. God promised His people Israel that if they obeyed His laws, He would bless them with “rain in due season” (Leviticus 26). But He also promised that He would withhold those blessings as a punishment for disobedience (verses 19-20; 2 Chronicles 7:13-14).

Notice this quote from our free booklet Why ‘Natural’ Disasters?:

Anyone who has been paying attention will note that large-scale nature-related disasters are increasing. Every few weeks it seems, Earth unleashes devastating violence of some sort or other. An earthquake—a tornado—a tsunami—a massive storm—a flood—a drought—a rash of wildfires. It levels property, destroys homes, decimates crops, claims lives. And another constellation of survivors are left breathless in its wake, tasked with trying to piece their shattered lives back together.

It is a dreadful reminder of an awesome and important reality. …

Almighty God tells us that the real cause of our upset natural conditions is SIN—which is the breaking of His laws (see 1 John 3:4). God uses weather to correct and discipline His creation—to help us realize the error of our ways! …

That is the best possible news this world could ever hear!

The world calls events like Typhoon Jebi “natural disasters.” But these disasters are anything but natural.

To understand more about this subject, please read our free booklet Why ‘Natural’ Disasters?