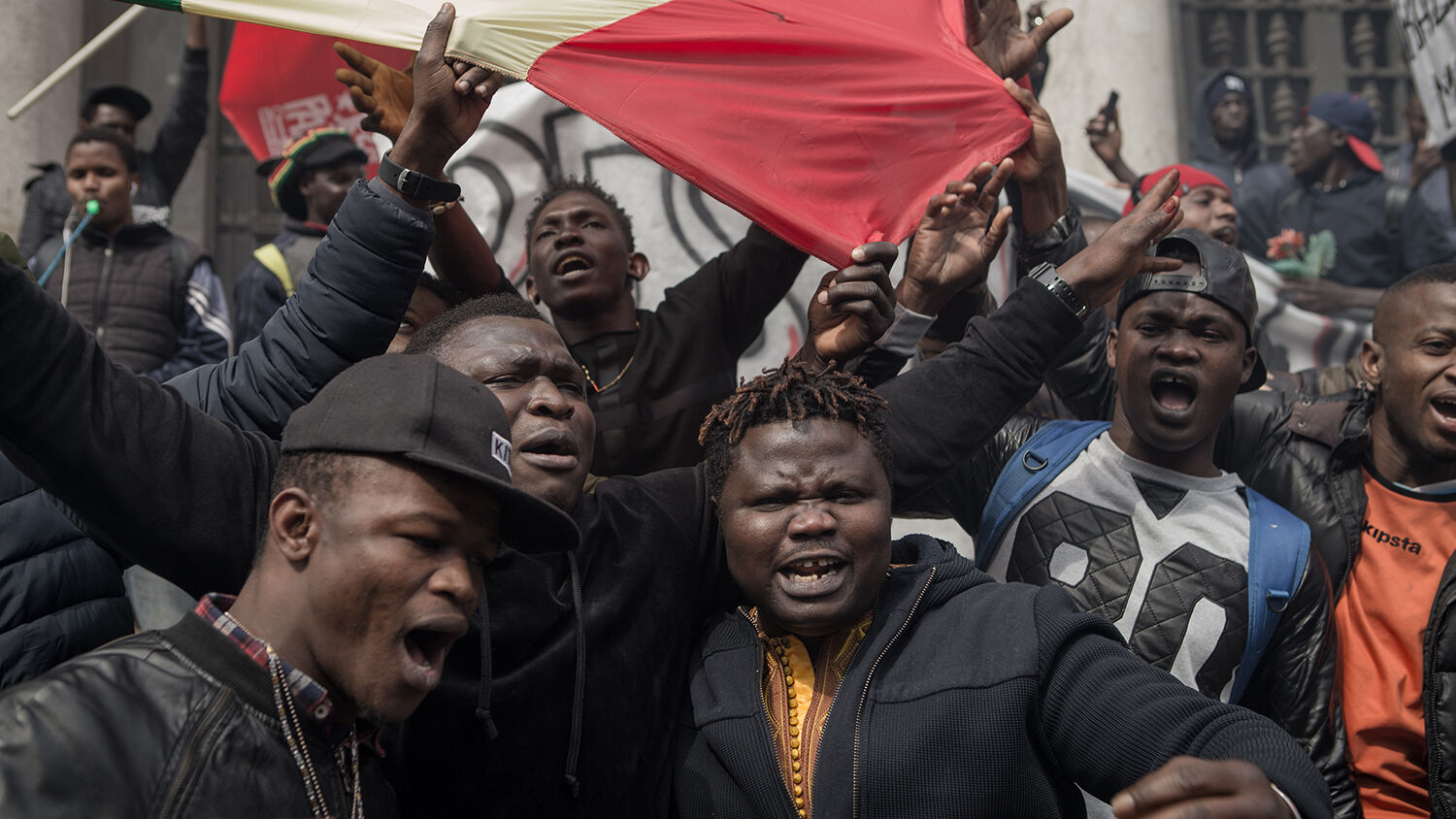 African protesters chant slogans during a demonstration following the murder in Florence of Idy Diene, a 54-year-old man from Senegal.
Getty Images

Ludmila Acone, a historian and researcher at Pantheon-Sorbonne University in Paris, told France 24, “[These assaults] have resulted in an impression that this behavior is now tolerated. Previously, these racist attacks caused outrage, but now they are just part of everyday life.”

In one incident, several assailants chased a Moroccan man in his car, allegedly because they thought he was a thief. When his car crashed, the men attacked him, and he died from his injuries. In another case, two men attacked a 19-year-old Senegalese man in the bar where he worked, while shouting racist epithets at him. At least half a dozen people who aren’t ethnically Italian have been injured in drive-by shootings with air guns. A migrant from Mali was shot and killed while he was working on the roof of a building. A former Italian government employee shot a 1-year-old Roma toddler in the back. He said it was an accident that happened while he was testing an air gun.

In at least two of these allegedly racist incidents, the attackers shouted the name of Matteo Salvini, whose Northern League party opposes mass immigration. When two railway porters in Venice attacked another porter from Africa in July, his assailants told him, “This is Salvini’s country.”

In the most high-profile instance thus far, someone threw an egg from a vehicle at Daisy Osakue, an Italian discus thrower whose parents are Nigerian. Her eye was injured in the attack. “They did it on purpose,” Osakue claims. “They didn’t want to hit me as Daisy; they wanted to hit me as a young woman of color.” The racist motive is disputed in this case. However, former Italian Prime Minister Matteo Renzi tweeted: “Attacks against people of different skin colors constitute an EMERGENCY.” Salvini called his statement “nonsense.” In Salvini’s view, “the wave of racism is simply an invention of the left.”

Salvini has made no secret of his stance opposing mass immigration. When he became Italy’s interior minister in June, he said, “Good times are over for illegals.” His Five Star Movement won about 31 percent of the vote in the March elections and formed a government coalition with the right-wing Lega party, which also favors increased restrictions on migration.

Salvini has repeatedly made headlines in the last several months for refusing to allow ships filled with rescued migrants to land in Italy, forcing other EU nations to take them in. Italy has been a primary entry point for migrants, but when the crisis got out of hand, frustrated Italians voted in a new government that strongly opposes migration. Marie-Anne Bonucci, a professor of contemporary history at the University of Paris viii, told France 24, “The Italians recently voted in a state of anger. With the economic crisis, the disadvantaged are furious. They are afraid of becoming more so.”

Some voices in the Italian government are drawing attention to the racist attacks. Maurizio Martina, leader of the center-left Democratic Party, tweeted: “Whoever denies the spiral of racism that is growing in the country becomes complicit.”

Italy is the home of the Catholic Church, headquartered in Vatican City. Pope Francis has been very involved in the refugee crisis, encouraging European governments to take more action. He even allowed a dozen Syrian refugees to stay in the Vatican to avoid being deported from Greece. “If you want to do it in the Vatican, go ahead,” Salvini wrote on Facebook. “But as a Catholic, I don’t think Italy can welcome and support the whole world.”

Trumpet contributing editor Brad Macdonald wrote in the November 2015 issue, “The refugee crisis is thrusting Germany (and Europe) into a transformational identity crisis.” This crisis is causing European nations to turn toward populism and causing some people to become violently anti-immigrant. Secular, multicultural Europeans are beginning to change their perspectives.

Carla Nespolo is the president of the National Association of Italian Partisans, an organization formed to fight fascism and Nazi occupation in World War ii. She told the Guardian that she is concerned about the rise in populism, saying, “The extreme right has found a party through which it can speak. Migrants in Italy have taken the place of Jews during fascism. This is one of the most far-right governments since the end of fascism.”

Mamadou Sall, an Italian citizen who moved to Italy from Senegal 20 years ago, told the Guardian that he wanted to leave. He said, “Every time you speak to an Italian, you realize that there’s been a lot of impact on their mentality. They seem to be closer to the world of fascism, speaking about the good things that fascism did during the war. … There is no value for people with a different skin color. When a black person is killed, there is always an excuse. But when a foreigner kills an Italian, they only focus on the fact that [the attacker] was foreign and the skin color.”

Over the last decade, Italy has experienced a “transformational identity crisis.” Its government today makes no secret of its ambition to end the migrant crisis. Many Italians support that goal. But for those who are aware of Italy’s recent history, an increase in racist acts in any European nation should be concerning.

Across Europe, racist acts and anti-immigrant sentiments are on the rise. In France, anti-Semitic acts have increased 20 percent since 2016. Spain has experienced a significant increase in anti-Islamic incidents since the 2017 terrorist attacks in Barcelona and Cambrils. In 2016, there was an average of 10 attacks every day on refugees or refugee hostels in Germany—more than 3,500 for the entire year. Austria is shifting toward stricter refugee policies. In Greece, there were 102 reported acts of racist violence and hate crimes last year, although researchers suspect the real numbers are far higher. Anti-immigrant and far-right political parties are gaining more and more support in many European nations. In some nations, like Italy, they have gained the majority in the government.

The refugee crisis has sparked political change in Europe. The changes are not over yet. Amid this uncertainty, Trumpet editor in chief Gerald Flurry wrote in our November 2015 issue, “Europe’s greatest need right now is leadership.” The Bible indicates that Europe will soon coalesce into a 10-nation superstate under the control of a strong German leader, guided by the Catholic Church. Italy will almost certainly play a significant part in that 10-nation combine. Mr. Flurry continued:

The migrant crisis is only one of these “epic problems,” but it is leading to more troubling problems throughout Europe.

To understand more about the importance of the migrant crisis, read “Europe’s Old Demons Return.”