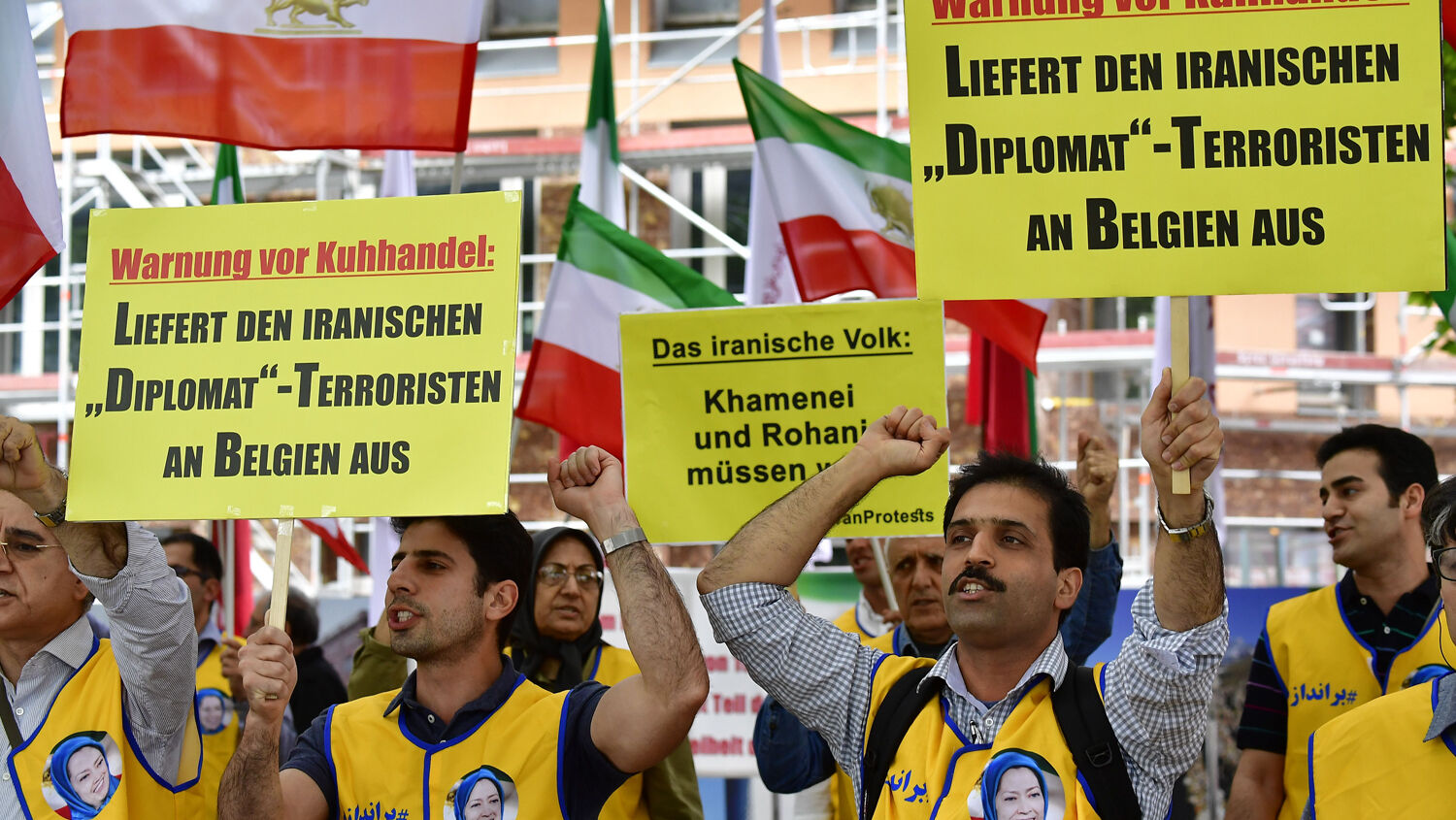 Activists of the National Council of Resistance of Iran hold placards reading “Deliver the Iranian diplomat-terrorist to Belgium” in front of the Federal Foreign Office in Berlin on July 11.
TOBIAS SCHWARZ/AFP/Getty Images

An Iranian diplomat engineered a bomb plot intended to disrupt the June 30 rally of an Iranian opposition party in Paris, Politico reported July 14. Belgian police arrested an Iran-linked Belgian couple who had explosives and a detonator in their car. The intended target was the annual rally of the Mujahedin-e-Khalq (mek) party, which opposes the Iranian regime. The rally usually draws around 25,000 people.

Police believe that the man behind the attack was Assadollah Assadi, an Iranian diplomat stationed in Vienna and the head of Iran’s European intelligence network. Assadi is also an officer in the elite al-Quds Brigade, part of the Islamic Revolutionary Guard Corps. Authorities believe Assadi organized the attack and gave the Belgian couple the bomb materials.

Iran rejects the accusations against “terrorist diplomat” Assadi, calling them “baseless.” However, the mek report about the incident alleges that all levels of the Iranian government were involved. It states that the attack was planned and approved several months ago. But Iran insists that the foiled plot was an attempt to make Iran look bad before the July 6 European Union meeting on the nuclear deal. Iranian Foreign Minister Javad Zarif tweeted that “Iran unequivocally condemns all violence & terror anywhere,” despite the fact that Iran is recognized as the world’s number one sponsor of terrorism.

How convenient: Just as we embark on a presidential visit to Europe, an alleged Iranian operation and its “plotters” arrested. Iran unequivocally condemns all violence & terror anywhere, and is ready to work with all concerned to uncover what is a sinister false flag ploy.

After the recent cell was neutralized, the mek meeting went ahead as scheduled. Thousands of people attended the rally, including many Iranian exiles and other supporters, such as former Israeli Prime Minister Ehud Barak, former Canadian Prime Minister Stephen Harper, former New York Mayor Rudy Giuliani and former Speaker of the House Newt Gingrich.

The United States has openly blamed Iran for the foiled attack. Iranian leaders deny responsibility, claiming that the bomb plot was a “false flag” operation, instigated by the mek itself. But the U.S. is not convinced. A senior U.S. State Department official told reporters at the July 11 nato conference in Brussels, “If Iran can plot bomb attacks in Paris, they can plot attacks anywhere in the world, and we urge all nations to be vigilant about Iran using embassies as diplomatic cover to plot terrorist attacks.”

The bomb plot comes at an interesting time in Iran’s relations with the rest of the world. President Donald Trump announced in May that the United States is withdrawing from the Joint-Comprehensive Plan of Action (jcpoa), commonly known as the Iranian nuclear deal.

The Iran Deal is defective at its core. If we do nothing, we know what will happen. In just a short time, the world’s leading state sponsor of terror will be on the cusp of acquiring the world’s most dangerous weapons…. pic.twitter.com/58qwBLzxIH

Since the president’s announcement, Iran and Europe have both been scouting their options. Many European nations have criticized President Trump for scrapping the deal, and say they will work with Iran to keep it in place, even without the U.S.

The U.S. plans to restart economic sanctions on Iran by August 6. President Trump has also called for a ban on Iranian oil exports. Any country that is still buying Iranian oil by November this year will face secondary sanctions from the U.S.

On July 6, leaders from the European Union met in Vienna with their Iranian, Russian and Chinese counterparts. They discussed Europe’s next move on the nuclear deal and possible ways around the planned U.S. sanctions. Europe could lend Iran money directly from the European Investment Bank, to keep Iran’s economy going when its assets are frozen under U.S. sanctions. EU nations could also make direct money transfers to Iran, which would skate through the gray areas of the sanctions. The EU hoped that by offering these olive branches, Iran would be convinced to stick with the nuclear deal. However, Iran was not satisfied with the EU’s offerings. It threatened to resume its nuclear weapons program if the deal falls through.

The U.S. administration has used the foiled bomb plot in Paris as proof that America’s allies should take a harder stance against Iran, instead of pandering to Iran’s requests in a last-ditch effort to keep the nuclear deal alive. Caroline Glick wrote in the Jerusalem Post: “[I]t is amazing [that] right after terrorists under the direct command of the Iranian regime were caught en route to carrying out an attack in Paris, Europe’s top diplomats sat down with the leaders of the regime and brainstormed how to shower them with cash in open defiance of the United States.”

Recently, Iran asked Germany to allow it to withdraw over $350 million in cash from Germany’s central bank. The cash would then be flown to Iran. The Iranian government would be able to use the money, even when other assets are frozen as U.S. sanctions snap back. The German government appears to support this move. Iran claims that the money will go to businessmen, not to supporting terrorist operations like the alleged Iranian bomb plot. But if it is proved that Iran sponsored the attempted bombing, Germany and Europe cannot ignore that without looking weak.

As Glick pointed out, the foiled bomb plot shows one thing clearly: Iran has an organized terrorist network established in Europe. The three people who were arrested in connection with the plot lived and worked in Germany, Austria, Belgium and France. European intelligence was actually unaware of the bomb threat until U.S. intelligence provided a tip. Glick questioned whether Europe’s desperation to keep the nuclear deal alive is an attempt “to convince the Iranians to attack someone else instead of [Europe].”

Assadi, the “terrorist diplomat,” was charged on July 11 with commissioning the Belgian couple to bomb the mek meeting. European authorities have yet to officially state who they believe was behind the planned bombing, although the United States blames Iran. However, the fact that the mastermind of the attack was an Iranian diplomat and a member of the al-Quds force certainly indicates that Iran was at least complicit in the attack.

Whether or not Iran was behind this foiled bomb plot, prophecy indicates that it will soon step up its terrorist operations in Europe. Iran is already the world’s foremost sponsor of terrorism. The Bible indicates that Iran will adopt a “pushy” foreign policy that will threaten Europe, causing Europe to strike back “like a whirlwind” (Daniel 11:40).

The Trumpet has been watching for this clash between German-led Europe and Iran-led radical Islam for decades. Trumpet editor in chief Gerald Flurry writes in The King of the South:

Iran has a foreign policy with a lot of “push.” And since the end of its war with Iraq in 1988, Iran has accumulated a massive arsenal of weapons to back up its aggressive foreign policy, and that arsenal includes chemical and biological weapons.

The king of the south, or Iran, is going to “push at him”—that is, the king of the north (the European Union). Gesenius’ Hebrew-Chaldee Lexicon says the word push means “to strike—used of horned animals,” or “to push with the horn.” It is “used figuratively of a victor who prostrates the nations before him.” It also means to wage war. Push is a violent word!

Notice what we wrote in our 2017 article “Why the Trumpet Watches Iran and Europe Heading for a Clash of Civilizations”:

The gigantic clash the Trumpet is expecting, in fulfillment of these biblical prophecies, all begins with pushy Iran.

This is the same nation that is about to get the nuclear bomb. Iranian leaders and many of their people believe the 12th imam—their version of the Messiah—is about to return. They think his return can be hastened by creating violence and chaos. Several nations have nuclear weapons—but only Iran has leaders who harbor such dangerous religious thinking! What will happen when they achieve nuclear capability? What sort of chaos would they stir up if they thought it would cause their messiah to return? In the thrall of religious zealotry, they would not even care about their own destruction!

The Bible does reveal that finally, after being pushed too far, the German-led European power will stand up to the king of the south.

Europe and Iran will clash soon. Events like the alleged Iranian bomb plot are pushing Europe—and will soon push too far. Europe’s attack on the king of the south will set off a chain of prophecies that culminate in the most wonderful event in Bible prophecy, the return of Jesus Christ. That is why the Trumpet closely watches for events like this foiled bomb plot. As we wrote in 2017, “It all begins with a push.”

To understand more about this subject, please read Gerald Flurry’s free booklet The King of the South. Also watch our 90-second video on the same subject.