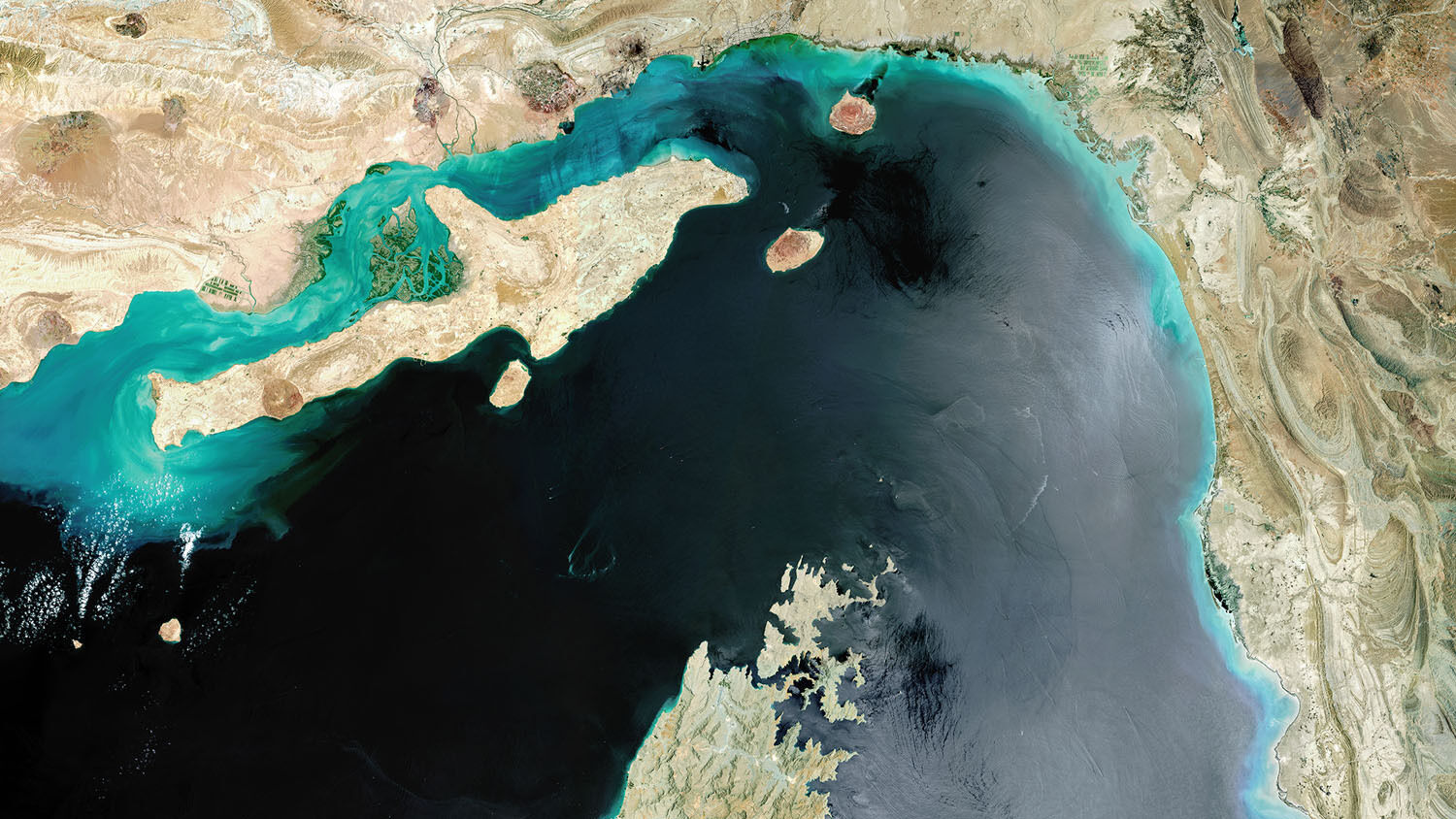 A satellite image from May 24, 2017, shows the Strait of Hormuz, a strategic maritime choke point with Iran situated at the top with Qeshm Island and the United Arab Emirates to the south.
Gallo Images / Copernicus Sentinel 2017/ Orbital Horizon/Getty Images

Iranian military to Donald Trump: ‘All can use the Strait of Hormuz or no one.’

The Strait of Hormuz is a crucial sea gate for not only the U.S. and Iran, but the majority of the world’s global oil trade. It lies in the Persian Gulf between Omani and Iranian territory. Through this gate, ships transport roughly 17 million barrels of oil per day, accounting for 30 to 35 percent of the world’s maritime oil trade and 90 percent of the Persian Gulf’s oil exports. Closing this strategic passageway would have severe repercussions on the oil trade on a global scale.

On July 3, Rouhani published comments on his official website saying, “The Americans have claimed they want to completely stop Iran’s oil exports. They don’t understand the meaning of this statement because it has no meaning for Iranian oil not to be exported while the region’s oil is exported.”

President Trump is implementing a strategy to cut off Iran’s oil exports, and it is coming at a bad time for Iran. According to Geopolitical Futures, this could diminish Iranian oil output from its current 2.28 million barrels per day to only 1 million barrels per day. This would cause the value of Iran’s currency, the rial, to collapse. To strike back, Iran is using its “real nuclear option,” as some call it, by threatening to close this crucial strait.

“We are hopeful that this plan expressed by our president will be implemented if needed,” said Islamic Revolutionary Guard Corps Cmdr. Mohammed Ali Jafari. “We will make the enemy understand that either all can use the Strait of Hormuz or no one.”

Threatening to close the strait gives Iran some leverage against the U.S. and increases market instability, but it ultimately results in a loss on both sides. Stratfor says this course of action would cause three significant problems for Iran: One, Iran would be opening up a major struggle against not only the U.S. but also the Gulf Cooperation Council, which seeks to maintain peace in the strait. Two, Iran would risk compromising its own economy as it also relies on free passage through the strait. Three, Iran would most likely face more U.S. sanctions and further damage relations with its allies like the European Union, China and India.

For decades, the Trumpet has warned about the threat Iran poses to the rest of the world. Iran’s plan to close the Strait of Hormuz exposes its “pushy” nature, as prophesied in Scripture; it highlights a significant prophecy recorded in Daniel 11. “And at the time of the end shall the king of the south push at him: and the king of the north shall come against him like a whirlwind, with chariots, and with horsemen, and with many ships; and he shall enter into the countries, and shall overflow and pass over” (verse 40).

The “king of the south” can be identified as modern radical Islam, led by Iran. The word “push” means to push at or wage war. Threatening to close down the Strait of Hormuz is just another way Iran pushes and provokes other nations to get what it wants.

Iran’s plan targets many of its allies, including the EU, a power that won’t like the repercussions against its economy. Despite its radical tendencies, Iran will be overcome by a greater power in the future. The “king of the north” mentioned in verse 40 is a European power, led predominantly by Germany, that will attack Iran like a “whirlwind,” destroying it completely.

Request our free booklet The King of the South, by Gerald Flurry, for further reading on this subject.