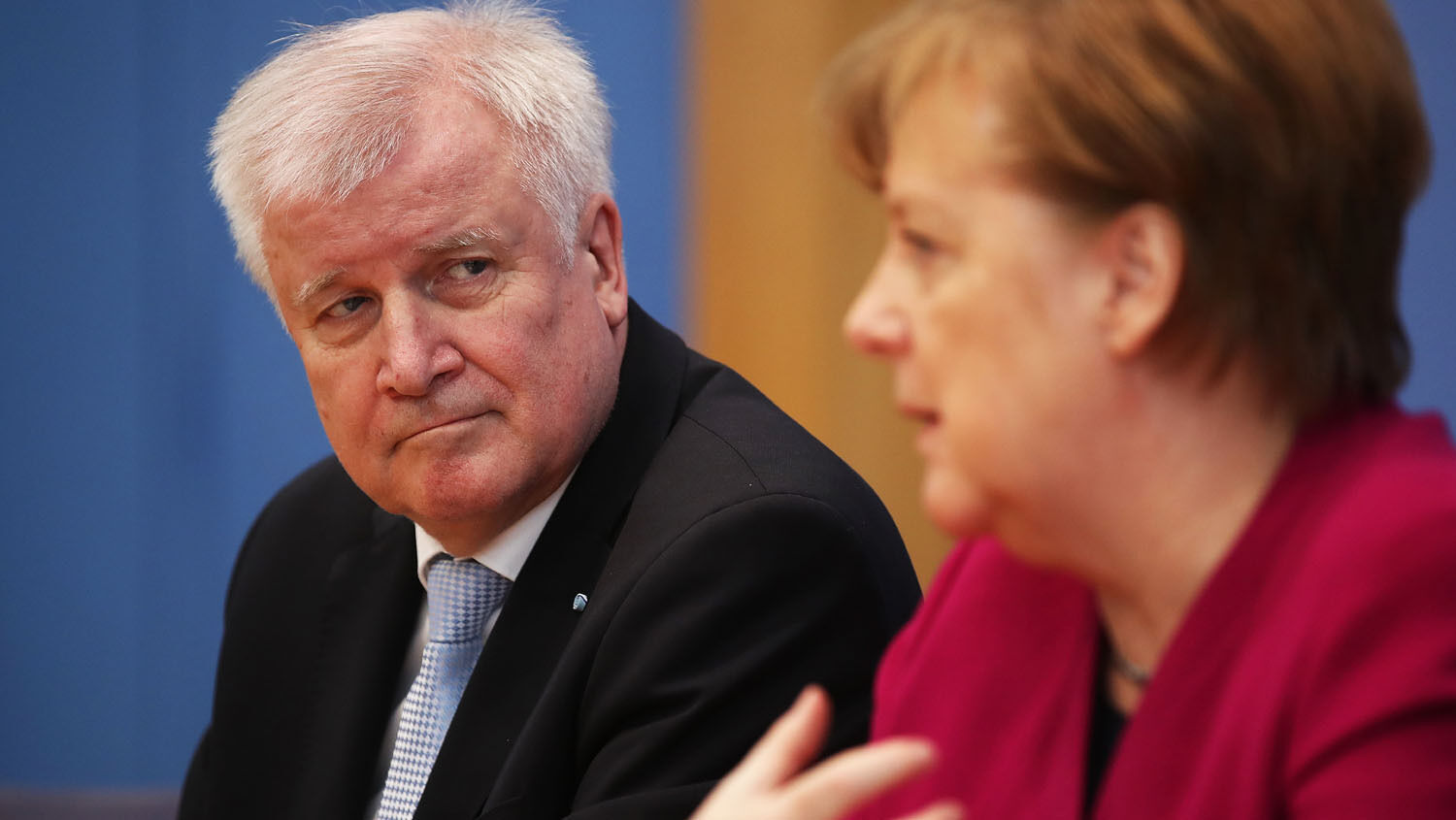 Germany’s interior minister and a key figure in the nation’s weak coalition government, Horst Seehofer, threatened yesterday to resign after a prolonged dispute with Chancellor Angela Merkel over migrant policies. With this shock announcement on July 2, German politics just got a lot more complicated. Merkel’s grip on the government has been slipping for months. This latest development is another hit to her credibility and leadership.

Seehofer’s threat came after he met with Merkel for several hours yesterday to try to work out their differences. These two leaders have widely different views on how to handle the migration crisis that has plagued Europe for the past several years. Seehofer wants to tighten border security and keep migrants out. Merkel wants to let them in. The current dispute arose because Seehofer wants to turn away at the German border migrants who have already registered in another European Union country.

Merkel strongly opposes turning migrants away at the border. She fears that doing so would destroy the Schengen Agreement, which established open borders between 26 European nations. If Germany shuts its borders to migrants, it might inspire other countries to do the same. Austria has already said that it would follow suit if Germany shut its borders. That could create a chain reaction that would destroy the open-borders agreement.

Seehofer’s party, the Christian Social Union (csu), is based in Bavaria. Last week he told Merkel that if she doesn’t capitulate, Bavaria will start turning away migrants at its own borders anyway. This is an act of outright mutiny against the German leader.

On Friday, it seemed Merkel had successfully negotiated a deal with other EU countries that appeared to address the migrant issue (and satisfy Seehofer). But Seehofer slammed the agreement as “ineffective.” The New York Times ran an article about the summit titled “Migration Deal in Europe Makes No Commitments. Victory Is Declared.”

The migrant crisis has proved to be the worst crisis of Merkel’s tenure in office. It has also sparked a political crisis in Germany. The last several months have been some of the worst that Merkel has ever faced. Her shaky coalition government has been on the verge of falling apart since it was created. Each political earthquake since has brought it one step closer to collapse. The question is, how many earthquakes can the current government withstand before it collapses entirely?

Could events this week trigger Merkel’s exit and the rise of a new, stronger leader in Germany? We don’t know for sure. But one thing is certain: No matter how this works out, Merkel is walking on extremely thin ice.

Seehofer’s party doesn’t want him to resign. Neither does Merkel. If Seehofer resigns, the csu’s alliance with Merkel’s Christian Democratic Union (cdu) could fall apart. If the csu abandons its coalition agreement with the cdu, then Merkel will no longer have a majority coalition. If Merkel capitulates so that Seehofer doesn’t resign, it will be seen as a serious sign of weakness. Either way, the German government would be left in shambles. At the very least, Seehofer’s threat has destroyed what little credibility Merkel had left in German politics. If her own interior minister can threaten her political existence by throwing down the gauntlet of resignation, it’s painfully obvious that her control over the government is weak.

The cdu and csu agreed to have another round of talks on Monday, July 2, in a last-ditch effort to make an agreement. Seehofer said of the talks, “After that, we will see.”

The Trumpet is not the only news source that views this as a huge crisis for Merkel. Notice these statements from the New York Times on July 1 (emphasis added throughout):

Whatever the outcome, the last two weeks have left the chancellor badly damaged and many Germans wondering how much longer she will last. … They have exposed the spectacular weakening of a leader who not long ago was seen as a key defender of liberal values …. [O]bservers say Ms. Merkel is a political dead woman walking.

The New York Times quoted Prof. Andrea Römmele, who teaches at Hertie School of Governance in Berlin: “If [Merkel] doesn’t go down now, she goes down in the next crisis.” The article continued: “At stake at home is not just the chancellor’s clout and coalition, but her own political survival.”

cnbc agreed: The crisis “puts Merkel in a vulnerable position and raises the prospect of another election in Germany.” If another election is not on the cards, then Merkel “could stay on as chancellor until parliament elects a successor supported by a majority in parliament,” according to one source cited in the article.

In an interview yesterday, Merkel showed that she is aware of the danger. She said, “We are living in times when there is a lot at stake.” She said that Europe “is perhaps more in danger than we think,” and that “the question of migration can break Europe apart.” It could also break her coalition apart—and further crumble her position as leader of the government.

The first coalition attempt between Ms. Merkel’s Christian Democratic Union (cdu), the csu, the Free Democrats and the Greens fell apart last November. “Hardly anyone could have imagined that talks to form a new German government would collapse,” wrote Deutsche Welle. We weren’t surprised. Less than a week after the election, theTrumpet.com managing editor Brad Macdonald wrote that these negotiations are “not going to be easy. Personally, I wouldn’t be surprised if it turns out to be impossible.”

He was right. But why?

Here at theTrumpet.com, the Bible gives us insight into German politics that even Deutsche Welle, the nation’s public international broadcaster, can’t match.

The Bible tells us to expect a strong leader in Germany. The Trumpet has long watched for a strong German leader. In one of our earliest issues, in 1991, Trumpet editor in chief Gerald Flurry wrote, “If a real crisis develops, will the Germans call for a new führer? Your Bible says that is going to happen! That crisis will probably be triggered by an economic collapse in the U.S.” …

“This man doesn’t come to power the honorable way—by being voted into office,” Mr. Flurry wrote in November 2002. “He takes it dishonorably! He will work behind the scenes and come to power by flatteries—not votes!” In a 2009 Key of David program, Mr. Flurry said this leader could “perhaps take advantage of a weak coalition.” …

Germany now has the “weak coalition” that Mr. Flurry warned us to watch out for almost 10 years ago.

Germany’s weak coalition is now on the verge of collapse. At the very least, this is shaping up to be a very difficult week for Merkel—one that could possibly end her political career.

We say it often, and especially now: Watch Germany this week. We encourage you to check back with theTrumpet.com often. We will keep you informed of what is happening and what the Bible says about it.

For more information on what the Bible prophesies about Germany’s political future, read our free booklet A Strong German Leader Is Imminent. You can also listen to Trumpet executive editor Stephen Flurry’s Trumpet Daily Radio Show of June 29, where he talks about these latest developments.