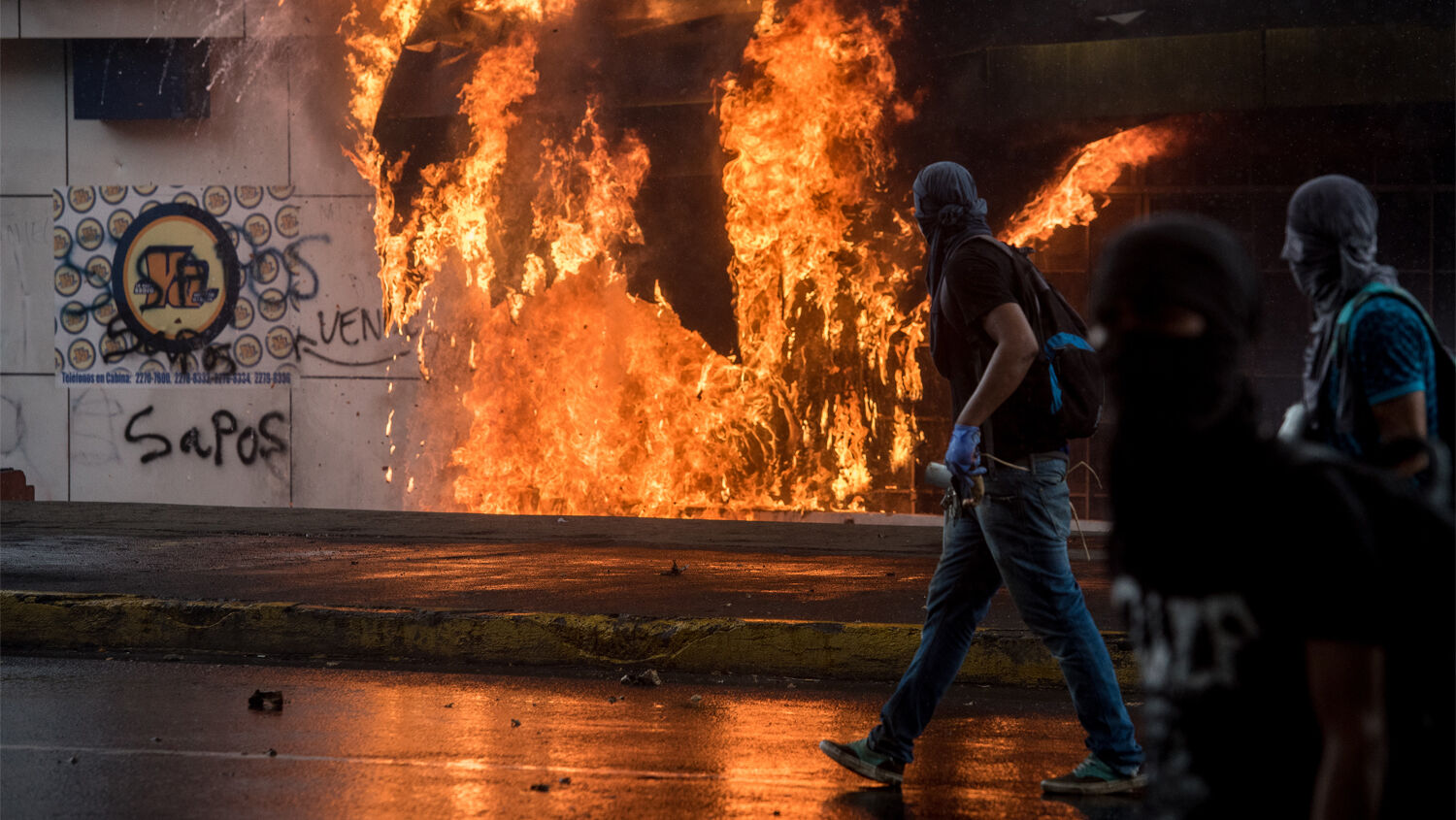 A group of hooded people walk along the flaming facade of the state radio station.
Getty Images

‘Nicaragua is in full cardiac arrest.’

Nicaraguan citizens began to protest against authoritarian President Daniel Ortega on April 18. Since then, Ortega has lost control over much of the small Central American country. Protesters have taken over cities, set up roadblocks, and attacked pro-government forces. Now Nicaragua is falling apart. A Time magazine correspondent living in Nicaragua wrote, “While the world watches Venezuela’s slow, cancerous death, Nicaragua is in full cardiac arrest.”

Although Ortega later dropped the planned pension cuts, that didn’t stop the protesters from demanding his resignation. Ortega reacted swiftly, sending police and armed forces to stop the protests. Since then, almost 200 people have been killed in continued conflicts between the protesters and Ortega’s forces. Many more have been wounded. Others are missing. The country is descending into anarchy as its leader desperately tries to maintain his hold on power.

Even before the protests began, Ortega had abolished term limits and given himself almost unlimited power. He was widely unpopular in his own country, as was his wife and vice president, Rosario Murillo. The pension cuts were the last straw for an already disgruntled citizenry. Now the demonstrators want reform and a more democratic government. The government says that the protesters are trying to stage a coup.

Prior to 1979, Nicaragua was a dictatorship led by the Somoza family. But in 1979, the Sandinista National Liberation Front overthrew the Somoza government. Ortega was president from 1984 to 1990. He returned to power in 2007 and has ruled ever since, after abolishing presidential term limits.

Since the protests began, demonstrators have set up more than 120 roadblocks throughout Nicaragua, hamstringing transportation. Some cities are completely closed off to pro-government forces. One of these cities, Masaya, was the heart of the Sandinista movement. Now this city is at the front of the rebellion against Ortega. They think that Ortega has “betrayed his revolutionary roots,” according to the Wall Street Journal.

The demonstrators are not planning to give up without a fight. A Masaya shopkeeper told the Wall Street Journal, “They will need 150,000 coffins if they want to defeat us.”

Nicaragua is not a huge player on the international scene; it is about the same size as the state of Florida but with a much smaller population and economy. However, Central American nations are strategically important, especially because of their proximity to the United States. More than that, instability in nations like Nicaragua has ripple effects elsewhere—whether from an increase in illegal immigrants fleeing a crisis in the country, or from the pressure that a collapsing government puts on surrounding nations.

Nicaragua is also unique because of its connections with both Russia and Iran—and the fact that China is hoping to build a canal through the country to rival the Panama Canal. If the canal is finished, it will give China an immense advantage. China wants an exclusive naval foothold in this vital area, which America previously dominated.

The Catholic Church’s influence in Nicaragua is also interesting. Nicaragua is more than 70 percent Catholic. Mediators from the Catholic Church have tried to end the crisis, encouraging Ortega to hold early elections. However, the church suspended its negotiations with Ortega this week because he refused to invite United Nations observers in to examine the situation for human rights violations. The fact that the Catholic Church is so involved in this conflict shows the importance of these South and Central American nations.

Our free booklet He Was Right says:

The headquarters of the Catholic Church is in Europe. Yet it is not Europe but Latin America—incorporating Mexico, the Central American isthmus and the continent of South America—that constitutes the most catholicized landmass in the world. The region’s largest country, Brazil, has more Roman Catholics than any nation on the planet, and Mexico is a close second. No continent is more aligned with the Vatican than Latin America.

The Plain Truth recognized the deep importance of the religious roots Europeans and Latin Americans share. In October 1957, it said, “Latin American nations will join in with the European revival of the old Roman Empire ….” Throughout history, that empire has been guided by the Vatican.

Europe is also deeply interested in Central and South America—and for a reason. Many of these nations are strapped for cash, and they welcome investment and stability from any source. Europe is one of the largest investors in Latin America. A foothold in one of these countries is also valuable for any nation seeking to oppose America. Both prophecy and recent events indicate that Europe may try to do that very soon. The Bible indicates that Europe will briefly form an economic alliance with most of the rest of the world in an attempt to freeze out the U.S. America will be “besieged,” and that will destroy it economically. The May 1962 Plain Truth said that “the United States is going to be left out in the cold as two gigantic trade blocs, Europe and Latin America, mesh together and begin calling the shots in world commerce.”

Whether or not Ortega manages to hold on to his control of Nicaragua, this crisis shows how unstable his country is. And Nicaragua isn’t the only one—other Latin American countries like Venezuela and Mexico are barely holding up. Nicaragua’s protests highlight the fractured state of many Central and South American governments—an instability that other powers are happy to take advantage of.