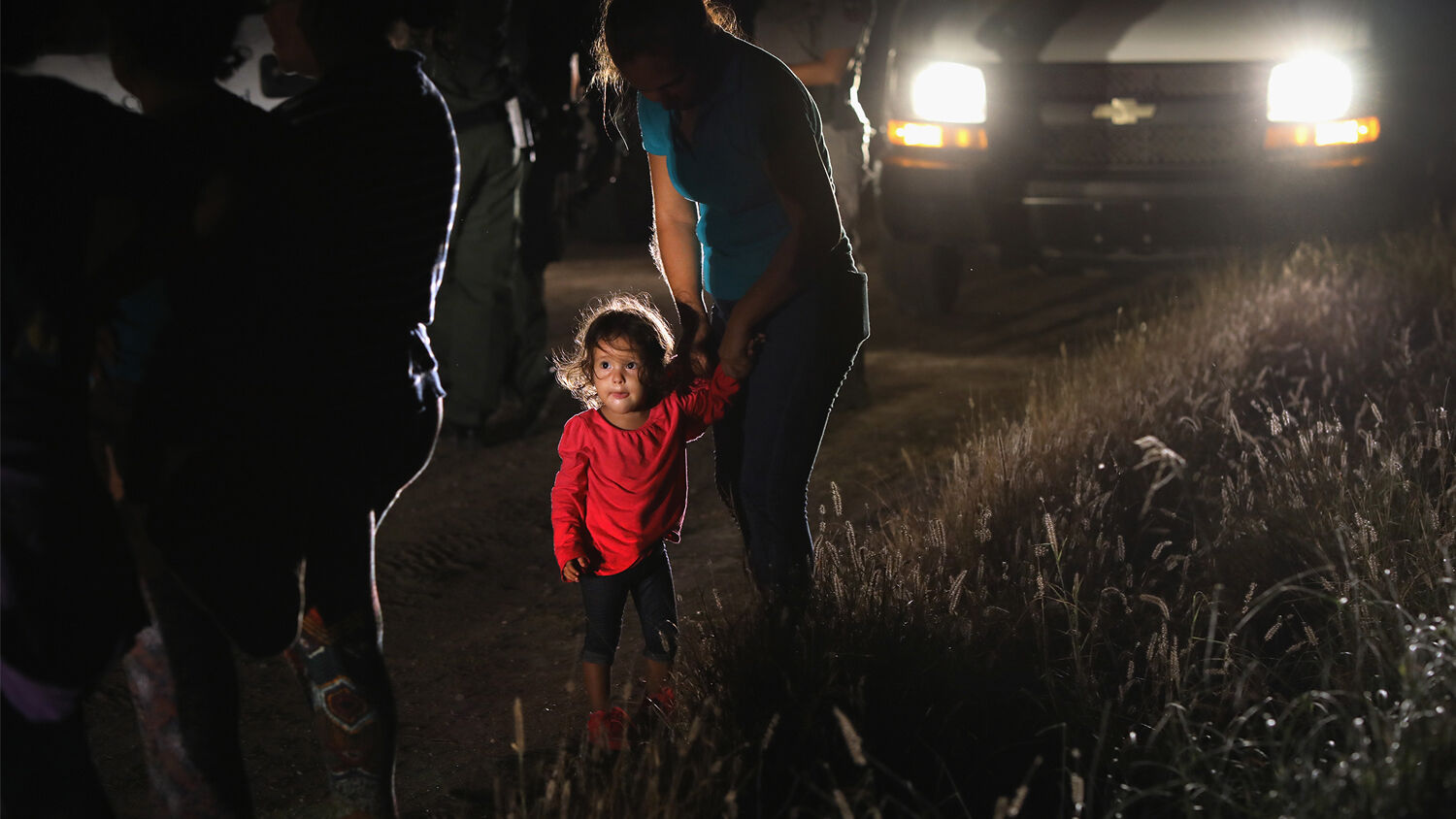 A 2-year-old Honduran stands with her mother after being detained by U.S. Border Patrol agents near the U.S.-Mexico border on June 12 in McAllen, Texas.
Getty Images

Don’t want to be separated from your kids? Then don’t try to cross the border illegally.

A 2-year-old girl cries as her mother is searched and detained. Children sob for their parents in an audio recording from a detention center. Media sources describe children in cages, inhumane conditions and human rights abuses. News outlets, media personalities, politicians, celebrities and ordinary citizens are joining together to condemn one person for breaking up families: United States President Donald Trump.

Is it that simple? Does President Trump hate these families, so he’s breaking them up? What are the facts?

First, the president is implementing laws that have existed for years. In the past, border laws have not been enforced consistently. In fact, even though he was the chief law enforcement official in the country, former President Barack Obama instructed border security agents not to enforce the laws. President Trump sees an open border as dangerous and decided in May to enact a zero-tolerance policy. Now anyone who crosses the border illegally will be prosecuted according to the existing law. This applies to everyone, whether they bring children with them or not.

Second, this is not the first time that a president has established a policy of applying the existing law to every person who crosses the border illegally. President George W. Bush set the precedent. And during the worst of the migration crisis in 2014, President Obama himself ordered zero tolerance.

Third, these are not concentration camps. Attorney General Jeff Sessions commented on immigration on June 14 in a speech in Indiana and emphasized that coming into America illegally is illegal and that lawbreakers should be prosecuted. In order to do so, the government does separate illegal immigrant families. But for how long? Years? For the rest of their lives like in World War ii? No; the separation generally lasts less than three weeks. Since their parents broke the law and are therefore held in jails, their children are put into special facilities rather than in jail with their parents. Sessions said (emphasis added throughout):

Many of the criticisms raised in recent days are not fair, not logical, and some are contrary to plain law. …

Our policies that can result in short-term separation are not unjustified. American citizens that are jailed do not take their children to jail with them. Non-citizens who cross our borders unlawfully between our ports of entry with children are no exception to this principle. They are the ones who broke the law. They are the ones who endangered their own children with this trek. The United States, on the other hand, goes to extraordinary lengths to protect these children while their parents go through the detention period.

Fourth, the media uproar over these children is not a sympathetic reaction—it is part of an agenda. Leftists in the media, entertainment and politics are not as concerned as you might think about children staying in special facilities for a few weeks. If they were, they would have set off an uproar during the Obama administration when some of the exact same things were taking place. In fact, former Obama speechwriter Jon Favreau widely circulated an image of detained immigrants sleeping on the floor, which sparked outrage from leftists. What they and Favreau didn’t realize is that the image was from 2014, right in the middle of Obama’s second term.

Leftists identified another photo of a young boy standing behind a wire enclosure as a child in the custody of immigration law enforcement; they labeled it “kids in cages.” It turned out that the boy was not in custody at all but was at a protest in Texas with his mother and brother and wandered over to the opposite side of a temporary barrier set up for the protest. His mother came and fetched him in about 30 seconds. But leftists have been quick to flood newscasts and social media with images, whether accurate or not, of families being “broken up.”

Supporting strong families is not exactly a hallmark of liberal leftists. These are the same reporters, anchors, entertainers and politicians who advocate abortion, homosexual “marriage,” transgenderism, promiscuity, easy divorce, and labeling just about any arrangement of human beings in a house as a “family.” This is not about families. This is about an opportunity to paint conservatives and especially President Trump as Nazis. And that is not an exaggeration.

Other governments have separated mothers and children pic.twitter.com/tvlBkGjT0h

His tweet from June 16 includes a photo of the notorious Auschwitz-Birkenau death camp in Poland, where Nazis shot, starved, gassed, burned and experimented on Jews and other victims, killing more than 1 million men, women and children.

In our hearts and minds today: all of the fathers and parents who have been separated from their children at borders. Keep families together. #FathersDay

Former President Bill Clinton said, “These children should not be a negotiating tool. And reuniting them with their families would reaffirm America’s belief in & support for all parents who love their children.”

Clinton’s commentary is especially confounding. He was partly responsible for the laws that he is now complaining about. In 1996, Clinton signed into law the Illegal Immigration Reform and Immigrant Responsibility Act. This law is the basis of today’s policies on illegal immigration and deportation.

The actual issues, including the safety of the immigrants and their children (and children who are with traffickers and kidnappers claiming to be their parents), are not as important to leftists as the opportunity to smear as fiendishly evil the idea of secure, orderly borders—as well as the people who support them.

Fifth, millions of Americans recognize that illegal immigration is a huge problem. Donald Trump promised to secure the border during his presidential campaign. Tens of millions of Americans voted in support of that promise, in favor of enforcing immigration laws. This is the movement that liberal leftists are attacking. They favor wide-open borders and rampant lawlessness. Some Americans still have the sanity and logic to realize that leaving the border open encourages criminals, endangers immigrants, corrupts justice, and endangers the entire society.

As American Thinker correctly noted, “Family separation is entirely preventable if you don’t break immigration law. How hard is that to understand? Like your kids? Don’t break the law with them.” This, the article continued, is a completely avoidable dilemma.

The Women’s March organization tweeted on June 16: “Over 2,000 children have been taken from their families by [Immigration and Customs Enforcement] ice & Border Patrol—and that’s just in April and May. Children should not be separated from their parents against their will.”

Over 2,000 children have been taken from their families by ICE & Border Patrol — and that’s just in April and May. Children should not be separated from their parents against their will. #FamiliesBelongTogether & immigrants are #HereToStay. #SignofResistence by @bluedelliquanti pic.twitter.com/sygPcRTzck

But as the acting director of ice told journalists on June 5: “Children and parents get separated every day across this country when a parent is charged with a criminal offense. It’s sad to see children cry when you take a parent out of a home, but because it’s sad, doesn’t mean that we ignore the law.” It does not mean that you put children in jail with their parents or that parents get to break the law and avoid punishment simply because they have children.

Sessions connected the immigration issue with Romans 13 in his speech. This chapter exhorts true Christians to obey the government of the land, as long as it aligns with God’s law. Verse 1 says, “Let every soul be subject unto the higher powers. For there is no power but of God: the powers that be are ordained of God.” God allows the leaders in this world to have power. He allows them to make laws. And as long as those laws don’t conflict with God’s laws, we should obey them. Especially if people’s lives and the future of the nation is on the line.

God ordained the institutions of marriage and family. Obedience to His laws is what keeps families together—not lawlessness! The Bible teaches that when we sin against God’s law, there is a penalty for the transgression. Removing the penalty in the name of compassion and family togetherness will only make matters worse.

If you would like to read more about the importance of laws in an organized society, please read my father’s free booklet No Freedom Without Law. It gives precious insight into the importance of law-keeping and explains why our lawless society is crumbling before our eyes.