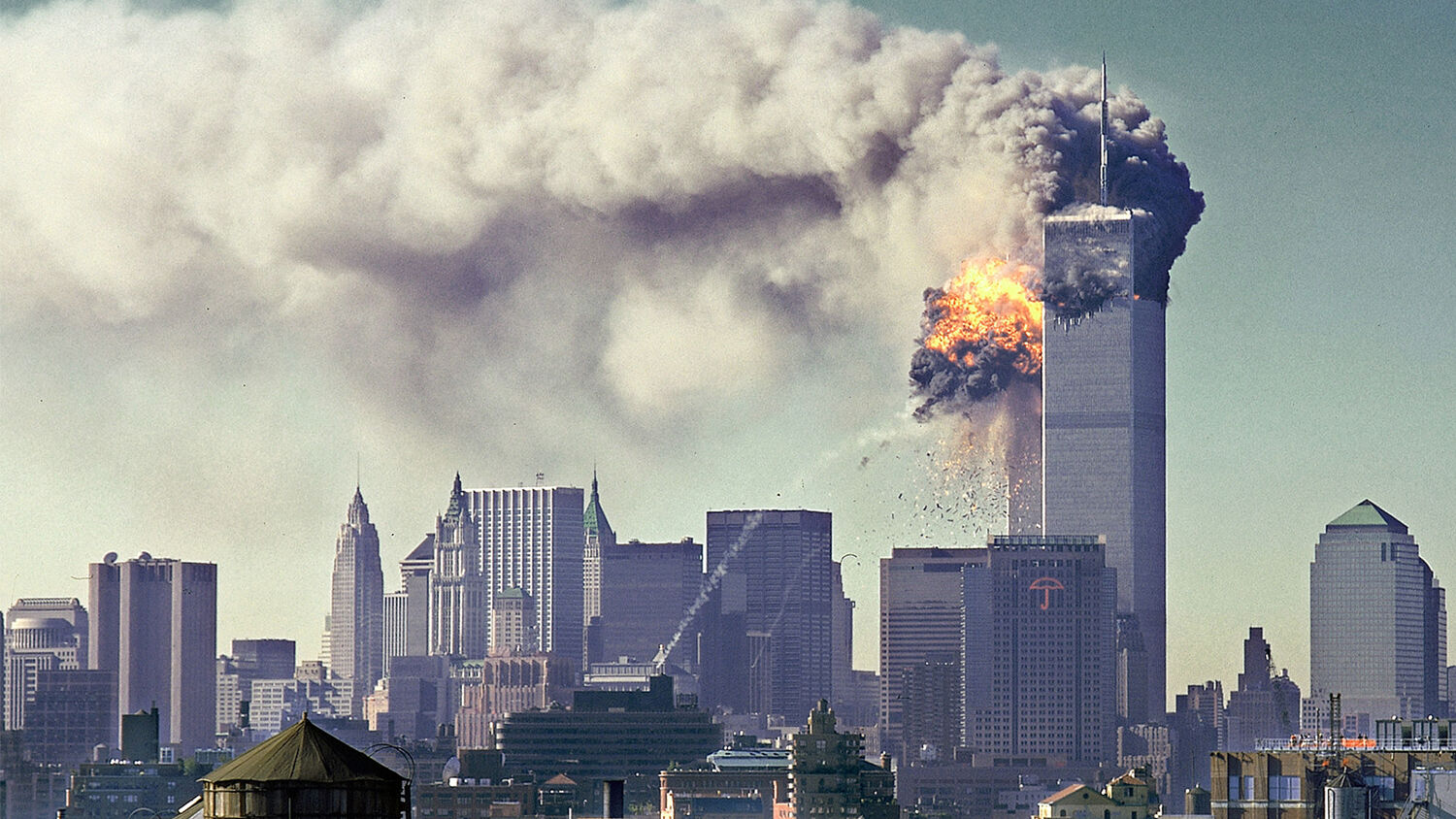 A fireball erupts from the south tower of the World Trade Center as the second of two hijacked airlines crash into the building in the morning of September 11, 2001.
DAN DOANE JR. / SIPA PRESS

Iran has finally admitted what the Trumpet has been proclaiming for over a decade.

Last month, Iran’s state-controlled television released a video indicating that Iran helped the 9/11 terrorists before their devastating attack on the World Trade Center. In the clip, Iranian politician Mohammed-Javad Larijani admitted that Iran knowingly allowed al Qaeda terrorists to travel through Iran before 9/11. Larijani said that the Iranian government “agreed not to stamp the passports of some of them” (emphasis added throughout). Not long after passing through Iran, these terrorists carried out the worst terrorist attack ever on American soil, killing almost 3,000 people.

This is the first time that Iranian officials have publicly admitted they were complicit in the 9/11 attack. Victor Davis Hanson wrote in the National Review on June 12, “The natural logic is that only thanks to Iran’s complicity did the World Trade Center implode.” Iran had the chance to do something to prevent the attacks, but it didn’t. If Iran had stamped the Saudi terrorists’ passports, it could have aroused suspicion when they entered Afghanistan. But Iran chose to turn a blind eye, tacitly encouraging the terrorists’ efforts.

WATCH: In an interview with the Iranian state TV, #Larijani narrated the details of the regime’s relations with al-#Qaeda and how the country’s intelligence supervised the passage and relocation of its members in #Iran.https://t.co/fHfzuck4hT pic.twitter.com/zm2DInWl9h

Iran’s state-controlled media is well known. Larjani would not have said what he did without approval from Iran’s leaders. As American Spectator wrote, the newly emboldened Iranian regime isn’t just confessing its role in 9/11, but actually boasting about it.

The timing of the video is also interesting. It was released after United States President Donald Trump announced on May 8 that America is withdrawing from the Iranian nuclear deal.

The U.S. has long suspected that Iran had a hand in the 9/11 terrorist attacks. The 9/11 Commission, which was formed to investigate the attacks, concluded that Iran didn’t directly support the 9/11 hijackers. However, it did suspect further Iranian involvement. In a 2011 article titled “Iran Helped Plan 9/11,” theTrumpet.com senior editor Joel Hilliker wrote:

[B]ack in 2004, the National Commission tasked with examining the 9/11 attacks was behind schedule and nearing the end of a 60-day extension it had received to release its report. With just a week to go, staffers got new information—an intelligence bombshell: a National Security Agency summary of the American intelligence community’s findings on how Iran had helped the 9/11 hijackers. It was based on dozens of nsa documents that explained the al Qaeda-Tehran relationship.

Trouble was, there wasn’t enough time to fully process the explosive information before the report had to be published. Nevertheless, the authors hastily composed and included a page and a half about it under the subhead “Assistance From Hezbollah and Iran to al Qaeda”; it described how Iran “frequently turned a blind eye” to recruiters, travel facilitators and document forgers streaming in and out of al Qaeda training camps in Afghanistan; it also said Iran had covertly facilitated travel for several of the 9/11 hijackers in the months before the attack. The cia considered the information so touchy (in part because it exposed the cia’s failure to recognize in advance just how important it was) that it lobbied, unsuccessfully, to have it stricken from the report.

At the end of its report, the 9/11 Commission wrote, “We believe this topic requires further investigation by the U.S. government.” There has not been any evidence of a follow-up investigation.

Every new revelation about Iran’s terrorist dealings makes it more obvious how illogical the Iran nuclear deal was. Through the deal, America handed Iran everything it wanted, and Iran promised almost nothing in return. Hanson wrote: “One wonders … whether the Obama administration knew of such rumored Iranian 9/11 involvement … at the time of the Iran deal.”

Did the Obama administration know? It’s a fair question. But whether or not Obama officials knew about Iran’s 9/11 involvement, it doesn’t negate the fact that America has long been aware of Iran’s terrorist dealings. As Hanson wrote, “The Iran deal was born in deceit, sold through deception, and kept alive by willful blindness.” Iran openly calls America “the Great Satan.” It has frequently said that it wants to wipe Israel off the map. Supreme Leader Ayatollah Ali Khamenei has repeated his people’s chant of “Death to America.” Iran is widely known as the world’s foremost sponsor of terrorism. Even with all of this knowledge, the Obama administration still went ahead with the nuclear deal.

A week after the September 11 attacks, Congress passed the Authorization for the Use of Military Force (aumf). The aumf authorizes the president of the United States “to use all necessary and appropriate force against those nations, organizations or persons he determines planned, authorized, committed or aided the terrorist attack that occurred on Sept. 11, 2001, or harbored such organizations or persons, in order to prevent any future attacks against the United States ….”

By signing the nuclear deal, the Obama administration gave a regime that “helped commit the 9/11 terrorist attacks” everything it wanted. Instead of “using all necessary and appropriate force,” President Barack Obama withdrew that force and allowed Iran to progress toward nuclear weapons. Instead of standing up to Iran to “prevent any future attacks,” the Obama administration capitulated to a terrorist-sponsoring nation. It did this even while proclaiming that it was standing up for international security.

Hanson wrote, “For all practical purposes, the U.S. after 2015 was a de facto partner of the Iranian regime ….”

How condemning. America has helped the very nation that wants to destroy it. Although the information in this new video clip is condemning, it only reinforces what the U.S. government should have already known: Iran hates the U.S.

In August 2004—three years after the 9/11 attacks—Trumpet editor in chief Gerald Flurry wrote about this very subject. After noting that Iran failed to stamp the 9/11 terrorists’ passports, he wrote: “The Iranian leaders didn’t want the world to see their tie to al Qaeda. That was an act of war. But America is too weak to fight Iran, and Iran is exploiting that deadly weakness.”

If Iran helped orchestrate the worst terrorist attack on American soil, why would the Obama administration want to negotiate with it? What happened to the policy of not negotiating with terrorists? Mr. Flurry made the reason very clear in that quote: America is too weak to fight back. God has broken the pride of our power (Leviticus 26:19). We still have a lot of that power, but we are not willing to use it.

Although President Trump has ended the nuclear deal, the damage has already been done. Iran and America’s other enemies know that we are weak. America may be experiencing a temporary resurgence right now, but that’s all it is—temporary. It is worth keeping that in mind.

To learn more about Iran’s role in Bible prophecy, watch our 90-second video “The King of the South.”