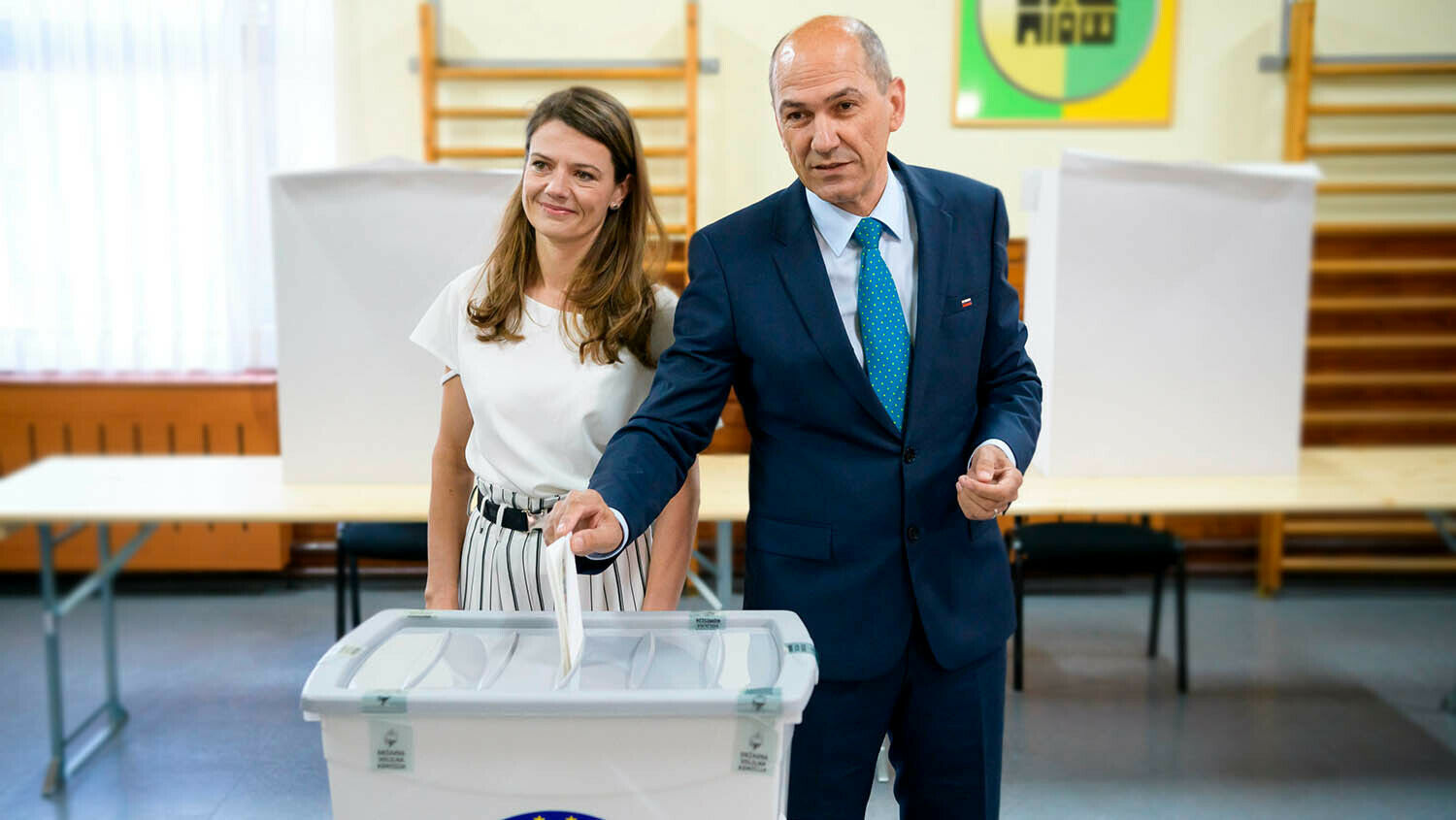 Janez Jansa, former prime minister of Slovenia and president of the Slovenian Democratic Party, flanked by his wife Urska Bacovnik, casts his ballot at a polling station in a small village on June 3.
JURE MAKOVEC/AFP/Getty Images

An anti-immigration party won the most votes in Slovenia’s parliamentary elections on June 3, making Slovenia the latest nation to join the recent far-right shift in European politics. This swing to the right has affected many nations across Europe, including Austria, Italy, the Czech Republic, Hungary and now Slovenia. The migrant crisis has been a major catalyst for this political shift, which is destabilizing politics across the Continent.

The Slovenia Democratic Party (sds), led by Janez Janša, took 25 percent of the vote in Slovenia’s parliamentary elections this past weekend. Janša told his supporters, “Those who cast their ballots for us have elected a party that will put Slovenia first.” But Janša’s party may struggle to form a majority coalition with other parties that aren’t as hard-line on immigration.

Slovenia has been hard-hit by the migrant crisis. After Hungary closed its borders with Croatia in 2015, the flow of migrants from the Middle East and North Africa shifted west into Slovenia. Slovenia has a population of just over 2 million and a land area about the size of the state of New Jersey. For a country this small, the sudden influx of hundreds of thousands of people have made a huge impact.

The immigration issue is close to home for Slovenian voters. Janša promised to do something about it. “We will never allow this to happen again,” he said.

Janša served as Slovenia’s defense minister from 1990 to 1994 and as prime minister from 2004 to 2008. During his previous terms in office, he was known for his authoritarian leadership and his strong stance on immigration. Many news sources compare him with Hungarian Prime Minister Viktor Orbán, who is strongly anti-immigrant. Orbán vocally supported Janša before the election. One source asked if Janša is “another Orbán?”

Danilo Türk served as president of Slovenia between 2007 and 2012. He told the Guardian that he was “very concerned” about Janša’s sds party rhetoric. “We have never had this kind of hate-mongering, xenophobia and plain lies in our electoral campaigns,” Türk said. “All this is coming at the time of a general movement of the European electorate to the right—in some countries to [the] far right. The situation is disturbing.”

A spokesperson for Jean-Claude Juncker, the president of the European Commission, said about the Slovenian elections: “The president is confident that the future government will make a valid contribution or join the effort building a democratic, successful and stronger European Union.” But will it?

Italy has also joined the populist trend. Matteo Salvini is Italy’s new interior minister and the head of the far-right Lega party. On the campaign trail, he spoke out strongly against illegal immigration. Salvini promised after gaining office that he would consider “how to reduce the number of arriving migrants and increase the number of expulsions.” His anti-immigration stance is what got him elected. He’s showing no sign of backing down.

More than a million refugees and migrants came to Europe at the height of the migrant crisis in 2015. Although the flow of migrants has slowed considerably since then, more than 150,000 migrants entered Europe through the Mediterranean in 2017.

While Greece remains the most popular European entry point for Mediterranean migrants, Italy is a close second. The peninsular country is an ideal place for seaborne North African refugees to land. At least 700,000 migrants and refugees have come to Italy in the last five years.

Salvini has promised to send half a million migrants back where they came from. At a rally in northern Italy on June 2, Salvini said, “The good times for illegals [are] over—get ready to pack your bags.” He said that Italy would no longer be “Europe’s refugee camp.” For Italian voters, this is a huge national issue. It’s also one that they think many established parties aren’t doing enough about.

Salvini’s party has entered a shaky coalition with Luigi Di Maio’s populist Five Star Movement. The two parties disagree on immigration and other issues. However, both parties will have to make concessions in order for this government to work. At the very least, the fact that Salvini’s party earned a significant percentage of the vote indicates that Italians want something to be done about the migrant crisis.

Salvini has said that he looks forward to working with Hungary’s Orbán on the migrant crisis. However, the Telegraph pointed out that Salvini and Orbán disagree on one key issue: migrant quotas. Salvini wants the refugees Italy supports to be spread around the EU. Orbán is strongly against the idea: That is why he closed his country’s borders in the first place.

Orbán’s view on the migrant crisis is that Europe is in danger of being “de-Christianized.” He is concerned that the EU is destroying national identity. In his view, the EU wants to make a “new, mixed, Islamized Europe” by allowing and encouraging out-of-control Muslim immigration. “The main question over the next few decades is this,” he said, “Will Europe remain the continent of the Europeans?” Blocking migrants is a way for him to protect what he sees as his country’s national interests.

The Czech Republic has also shifted to the right. Reuters reported on June 6 that Czech President Milos Zeman is reappointing Andrej Babiš as prime minister. Babiš leads the anti-establishment ano party. His party won elections seven months ago, but it has been struggling to form a government. Babiš is currently working to form a coalition with the Social Democrats.

After Babiš formed ano in 2011, his party won close to 20 percent of the vote in the 2013 Czech parliamentary election. The Atlantic asked, “How did he do it? The short answer is that he did not do it. The respectable democratic leaders of the European Union did it for him, by failing to respond to mass migration from Africa and the Middle East.”

Illegal immigration, the refugee crisis—these form the common refrain in all of these right-leaning movements. Europeans feel like nothing is being done to resolve the issue, so they are voting in people they think will take action.

Like Orbán, Babiš rejects the EU’s idea of migrant quotas, which would spread asylum seekers equally throughout the EU. Instead, he thinks the EU should reinforce its borders and try to make living conditions better in the places where the migrants come from.

The Guardian explained Europe’s shift toward the right and populism in a November 2016 article:

These parties have built a coherent ideology and steadily chipped away at the establishment parties’ hold on power by pursuing a new and devastatingly effective electoral strategy. They have made a very public break with the symbols of the old right’s past, distancing themselves from skinheads, neo-Nazis and homophobes. They have also deftly co-opted the causes, policies and rhetoric of their opponents. They have sought to outflank the left when it comes to defending a strong welfare state and protecting social benefits that they claim are threatened by an influx of freeloading migrants. …

These parties have steadily filled an electoral vacuum left open by social democratic and center-right parties, who ignored voters’ growing anger over immigration—some of it legitimate, some of it bigoted—or simply waited too long to address it.

Slovenia and other states are getting frustrated with the illegal immigration problem. Their politics are changing because of it. Many EU member nations are voting in euroskeptic, far-right parties. That doesn’t bode well for European unity. What it does indicate, however, is the rise of more action-oriented strongmen like Viktor Orbán.

We are in the midst of a shift in the European political climate. This change is causing strongmen to rise up in European governments—leaders who are willing to take controversial action.

The Trumpet has been waiting for the rise of one specific European leader for years: a strongman in Germany. The Bible describes this leader in many passages, including Daniel 8. Trumpet editor in chief Gerald Flurry writes in A Strong German Leader Is Imminent: “When the Bible talks about a king, in most cases it’s saying that this is not a democratic government. Even if he doesn’t have that title, he is going to lead like a king. This vision in Daniel shows that the European empire is about to become a lot more authoritative.”

The climate in Europe today is ripe for such a strongman to emerge. But as Trumpet writer Richard Palmer brought out in the January 2018 issue, the Bible also prophesies that there will be 10 strong leaders under this king. Revelation 17 describes 10 horns, or kings, who “give their power and strength unto the beast” (verse 13). Palmer wrote: “This prophecy describes a modern European power that will be ruled by 10 similar kings, authoritarian leaders who have power—which they give to an even stronger king.”

If you want to understand more about this subject, please read our article “Introducing Europe’s Eastern Strongmen” and Mr. Flurry’s free booklet A Strong German Leader Is Imminent.