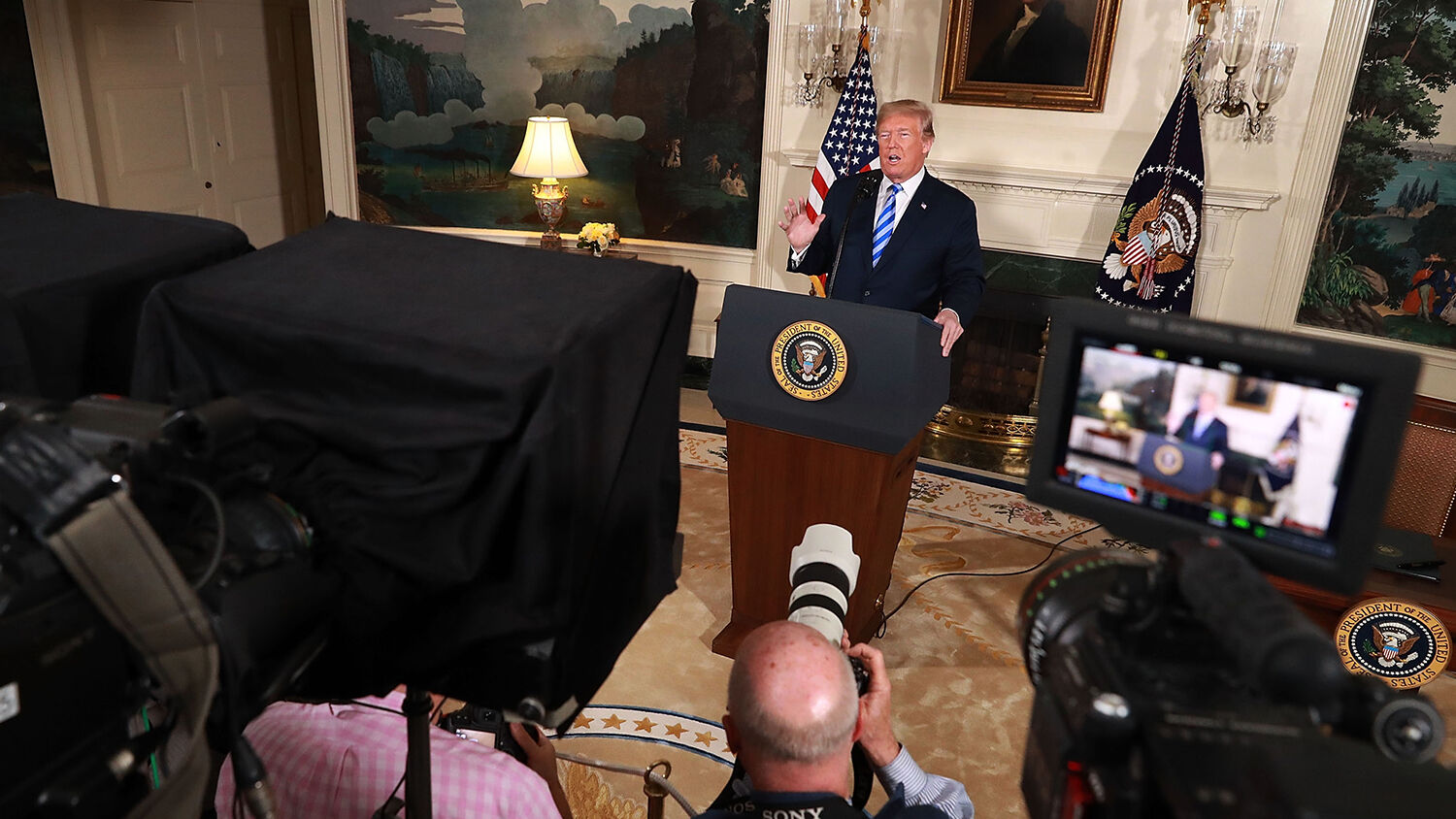 President Donald Trump announces his decision on May 8 to withdraw the United States from the 2015 Iran nuclear deal.
Getty Images

The president of the United States is canceling the worst foreign-policy decision this country has ever made. What will this lead to?

“Donald Trump has proved himself willing to take a stand where others have not,” my father wrote recently. The United States president certainly showed the truth of that statement yesterday when he announced that he is canceling the nuclear deal his predecessor negotiated with Iran.

The media backlash against his decision was immediate and violent. To listen to the commentators, it’s as if President Trump is a terrorist seeking nuclear weapons, instead of the one who is trying to stop the world’s biggest state sponsor of terror from gaining nuclear weapons.

“[T]he United States will withdraw from the Iran nuclear deal,” President Trump stated yesterday. “In a few moments, I will sign a presidential memorandum … reinstating U.S. nuclear sanctions on the Iranian regime. We will be instituting the highest level of economic sanction. Any nation that helps Iran in its quest for nuclear weapons could also be strongly sanctioned by the United States. America will not be held hostage to nuclear blackmail” (emphasis added).

The president summarized some of the history of the deal, calling it “disastrous” and a “great embarrassment” to all Americans. He referred to the April 30 revelation by Israeli Prime Minister Benjamin Netanyahu that proved Iran lied about its nuclear program while it was negotiating the nuclear deal (formally called the Joint Comprehensive Plan of Action, jcpoa). The whole deal was based on lies!

When Barack Obama was sworn in as America’s president, the Iranian regime was crumbling. Along with the International Atomic Energy Agency and Germany, the members of the United Nations Security Council (China, France, Russia, the United Kingdom and the United States) had ratcheted up political and economic pressure over a matter of years. Sanctions passed in late 2006, early 2007 and early 2008 were crippling Iran’s weapons program and hurting its economy.

June 2009 would see citizens demonstrating in the streets for weeks on end, protesting the allegedly rigged elections that brought hard-liner Mahmoud Ahmadinejad into power. Summer 2010 would bring a major increase in sanctions by the unsc, increased sanctions passed by the U.S. Congress and further sanctions by the European Union. September 2010 would reveal that the Stuxnet computer virus was originally and, apparently, successfully targeted at Iran’s nuclear enrichment facilities. Further sanctions would follow in 2011 and 2012.

But even as the world’s most terror-enabling, most vociferous regime was failing, it received a helping hand—from America. The Obama administration began orchestrating a deal that wasn’t good for anyone other than Iran. It was a parachute that President Obama threw to the mullahs—a rescue operation for this murderous regime. That’s the truth of it! The Trumpet named Obama’s jcpoa the “worst foreign-policy blunder in American history,” as my father called it. Americans blundered by allowing their leaders to go through with the deal—but President Obama, Secretary of State John Kerry and other leaders knew exactly what they were doing.

This was a disastrous deal from the get-go. It gave Iran hundreds of millions of dollars, and Iran changed nothing.

“The fact is, this was a horrible, one-sided deal that should have never, ever been made,” President Trump said in his statement. “It didn’t bring calm. It didn’t bring peace. And it never will. In the years since the deal was reached, Iran’s military budget has grown by almost 40 percent, while its economy is doing very badly. After the sanctions were lifted, the dictatorship used its new funds to build nuclear-capable missiles, support terrorism, and cause havoc throughout the Middle East and beyond.

“The agreement was so poorly negotiated that even if Iran fully complies, the regime can still be on the verge of a nuclear breakout in just a short period of time. The deal’s sunset provisions are totally unacceptable. If I allowed this deal to stand, there would soon be a nuclear arms race in the Middle East. Everyone would want their weapons ready by the time Iran had theirs.”

That is a sharply opposing viewpoint to the Obama administration’s. President Trump has “proved himself willing to take a stand where others have not,” my father wrote. Note the language the president used to describe the Iranian regime—“murderous,” “dictatorship.” Remember the verbal gymnastics the Obama administration went through when it was sending representatives to sit down across from Iranian representatives to negotiate a deal?

Former President Obama posted a statement on Facebook yesterday saying that the jcpoa is working. Obama is not one to ride off quietly into the sunset. He continues to use his massive influence to meddle any way he can. So does former Secretary Kerry. Kerry, whose daughter is married to an Iranian-American with numerous ties back to Iran, has been conducting his own shadow diplomacy in the Middle East this whole time, working against the sitting United States president’s goals in the region. But you won’t hear much about that in the media.

The French defense minister claimed Tuesday that weakening the deal might “aggravate the region.” The deal is a “source of peace.”

Meanwhile Iran’s regime is celebrating what it calls the “victory” of Hezbollah in Lebanon’s elections. The only armed party to participate in the elections and the only major party not to include any women on its list enjoyed unprecedented privileges at the ballot box. So while Western leaders were praising the “peace” and “stability” of the Iran deal, Iran was supporting the equivalent of a kkk-style armed organization running in the Lebanese election.

And President Trump is the one destabilizing the Middle East by insisting that Iran not obtain nuclear weapons? And we are assuming that the Middle East was previously stable?

President Obama said in his Facebook statement: “Debates in our country should be informed by facts, especially debates that have proven to be divisive. So it’s important to review several facts about the jcpoa.” Sounds like a wise, honest viewpoint concerned about facts. But look at the facts about what his administration did to seal this deal with Iran. High-ranking members of his administration admitted that they had to lie to make it happen!

Ben Rhodes admitted that he manufactured the narrative about the Iran deal. “The way in which most Americans have heard the story of the Iran deal presented … was largely manufactured for the purpose for selling the deal. Even where the particulars of that story are true, the implications that readers and viewers are encouraged to take away from those particulars are often misleading or false.”

Around the same time, a reporter asked then State Department spokeswoman Jen Psaki, “Is it the policy of the State Department, where the preservation or the secrecy of secret negotiations is concerned, to lie in order to achieve that goal?” Psaki responded: “I think there are times where diplomacy needs privacy in order to progress. This is a good example of that.”

So Obama administration officials admitted that they lied about the nuclear deal to the American people. And then Obama comes out and says, “Here are the facts about the deal.” Do you believe you can trust his “facts”?

Obama said, “The jcpoa does not rely on trust. It is rooted in the most far-reaching inspections and verification regime ever negotiated in an arms control deal.” He also said, “International monitors also have access to Iran’s entire nuclear supply chain so that we can catch them if they cheat.”

Iran is operating a larger number of advanced nuclear centrifuges than is allowed under the deal, it has exceeded its heavy-water cap, and it continues to refuse International Atomic Energy Agency inspectors access to its nuclear-research and military facilities—where, in all likelihood, they would find other violations in spades.

Iran, in an unusual arrangement, will be allowed to use its own experts to inspect a site it allegedly used to develop nuclear arms under a secret agreement with the UN agency that normally carries out such work, according to a document seen by the Associated Press. …

[T]he agency won’t even get photo or video information from areas Iran says are off-limits ….

Does this sound like the “most far-reaching inspections and verification regime ever negotiated in an arms control deal” that gives international monitors “access to Iran’s entire nuclear supply chain”?

“It is clear to me that we cannot prevent an Iranian nuclear bomb under the decaying and rotten structure of the current agreement,” President Trump continued in his announcement. “The Iran deal is defective at its core. If we do nothing, we know exactly what will happen. In just a short period of time, the world’s leading state sponsor of terror will be on the cusp of acquiring the world’s most dangerous weapons.”

Those are some pretty strong words from the president. The question for us is, what does this mean from a prophetic standpoint?

In my father’s article “Saving America From the Radical Left—Temporarily,” he explained the situation in America today:

What we are seeing is actually a modern-day fulfillment of what happened in ancient Israel under Jeroboam ii. A bit of a resurgence, some renewed prosperity, a swell of religious activity—but not true religion—with the blessing of the “king.” … It is a time of people being lulled into a false sense of security and a sense that God is with them. And meanwhile, the character of the leader is deeply flawed, and the sins of the people remain great and are growing worse.

If it seems like America is actually becoming great again under Donald Trump, it’s because it is. At least in comparison to what it was under a radical-leftist president. But it’s not President Trump who is stabilizing the ship. And it’s not a permanent course correction.

As my father emphasized in his article, the comparative resurgence in strength the U.S. is experiencing right now is temporary. Bible prophecy shows that we are approaching a time when America’s decisions regarding the nuclear deal—and America itself—will be irrelevant.

Daniel 11:40 describes a future clash between the king of the north (a European empire) and the king of the south (radical Islam, led by Iran). No matter how the dust settles after this nuclear deal throw-down, the major clash that will dwarf it into insignificance is the coming war between European allies and Iranian allies. By the time this major war between two world powers breaks out, the U.S. is not even a factor.

It is refreshing to see an American leader standing up and doing something sane for a change. He didn’t mince words in his announcement; President Trump is not one to sugarcoat things.

The deal was disastrous, and it should be nullified. But despite this temporary resurgence, the rod of correction is still coming on America, and our people need to wake up to what’s happening.

If you want to understand more about how and why the Trump administration has been able to do some good things for America, please read my father’s article “Saving America From the Radical Left—Temporarily.”