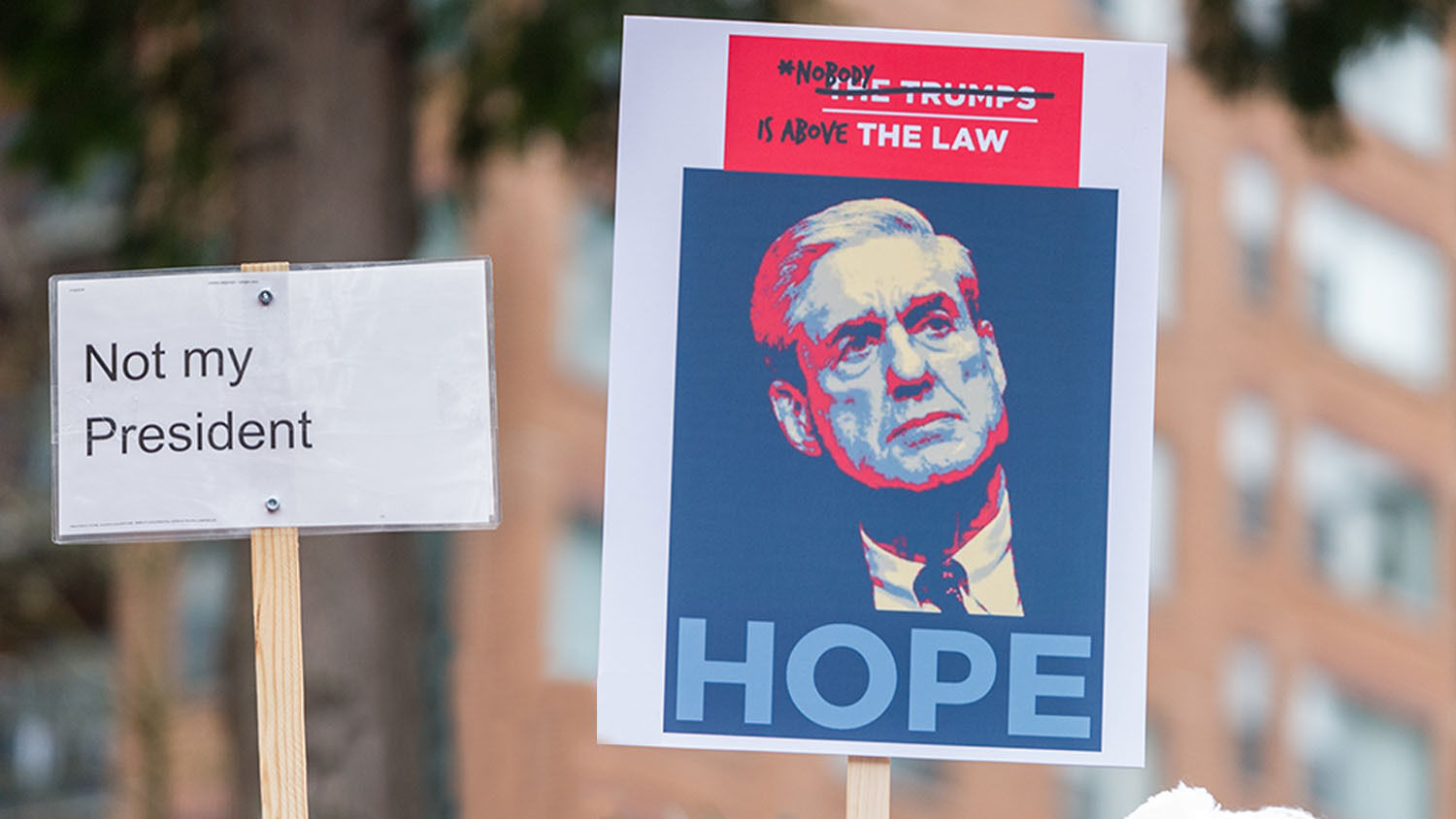 A protester wields a “hope” poster with the image of Special Counsel Robert Mueller at Portland’s National March for Impeachment on January 20 in Oregon.
Diego Diaz/Icon Sportswire via Getty Images)

Whatever the outcome of Mueller’s probe or the president’s response, rancor is worsening in Washington and across the nation.

It appears that hundreds of thousands of Americans will protest if President Donald Trump fires any member of the special counsel that is investigating Russian interference in the 2016 presidential elections. Special Counsel Robert Mueller reportedly passed information from his probe on to the Justice Department, which resulted in the controversial raid of the offices, home and hotel room of Michael Cohen, Mr. Trump’s personal attorney. White House Press Secretary Sarah Huckabee Sanders said that Mr. Trump believes he is within his constitutional rights to fire Mueller.

Advocacy group MoveOn.org pounced on the statement, saying that firing Mueller would be a “power grab” by the Trump administration that would cause a constitutional crisis and prompt the organization to hold “Nobody Is Above the Law” rallies across the nation. The organization says that, so far, 300,000 people have committed to attend the rallies.

Their voices are among the contingent who believes it would be illegal for President Trump to fire Mueller. This assumption is based on special counsel regulations laid down by the Office of the Attorney General. The regulation ascertains that a special counsel, Mueller in this instance, can be fired by the attorney general or deputy attorney general for “misconduct, dereliction of duty, incapacity, conflict of interest, or for other good cause.” The assumption is that because these two can fire a special counsel, then the president cannot. Mr. Trump’s critics believe that if he fires Mueller, or if he fires Rosenstein for refusing to fire Mueller, he will have committed a punishable crime. But what critics fail to consider is that Justice Department regulations, including those that govern the department’s handling of the Mueller investigation, are subordinate to the supreme law of the land: the Constitution of the United States.

As columnist Andrew McCarthy explained for the National Review, “[W]e have a unitary executive. All executive power is vested in a single official, the president of the United States. That means subordinate executive officers do not have their own power; they are delegated to exercise the president’s power. When they act, they are, in effect, the president acting. … Prosecutorial power is executive in nature. Federal prosecutors therefore exercise the president’s power. Deputy Attorney General Rod Rosenstein and Special Counsel Robert Mueller have no power of their own; they exercise President Trump’s prosecutorial power for as long as that arrangement suits President Trump. The president does not need a cause to fire them. He does not need to explain any dismissal to Congress …” (emphasis added).

McCarthy agrees with James Madison, who authored much of the Constitution and who stated in 1789, “I conceive that if any power whatsoever is in its nature executive, it is the power of appointing, overseeing and controlling those who execute the laws.” This means that the proposal put forth by the Senate Judiciary Committee to prevent Mr. Trump from executing this constitutional right is, strictly speaking, unlawful.

Congress does has one constitutional tool to remove the president from office. Article 2, Section 4 states: “The president, vice president and all civil officers of the United States, shall be removed from office on impeachment for, and conviction of, treason, bribery, or other high crimes and misdemeanors.” Impeachment consists of an accusation of wrongdoing, made by the House of Representatives and decided by a two-thirds majority of the Senate.

President Trump is caught between a rock and a hard place. If he allows Mueller to keep his job, he remains exposed to continued probing and perhaps more raids on his associates and confidantes. If he fires Mueller, 300,000 Americans may demonstrate in the streets and spark civil unrest. If Congress impeaches Trump for something revealed by a Cohen-style raid, or for something related to firing a member of the Mueller investigation, civil unrest may be sparked by Trump supporters.

“Try to impeach him. Just try it,” political consultant Roger Stone said last year. “You will have a spasm of violence in this country, an insurrection like you’ve never seen. Both sides are heavily armed, my friend. This is not 1974. People will not stand for impeachment.”

No matter what President Trump does, the rancor in Washington will only worsen between Americans. This is because America’s serious problems are not caused by one man or a group of government officials. They are caused by the American people as a whole. Only national repentance can prevent the sickness in America’s government from escalating into revolution and war.

“Donald Trump’s win is a prophetic sign of impending civil war and anarchy, followed by America’s worst military defeat ever!” wrote Trumpet editor in chief Gerald Flurry in his article “America’s Coming Civil War.” “But don’t blame the politicians or the race-baiters or the professional rioters. This situation exists in America only because of the sins of the nation—of all Americans! We can no longer ignore what we have reaped by giving ourselves over to sin. This is a reckoning!”

Yet as Mr. Flurry pointed out, there is an awe-inspiring purpose to this destruction. It is meticulously crafted and measured by God to bring His people to repentance. Then God will heal our divisions and unite Israel and the entire world under the righteous rule of His Son, Jesus Christ. To learn more about the crisis in America’s government and where it is leading, request Gerald Flurry’s free booklet Great Again.