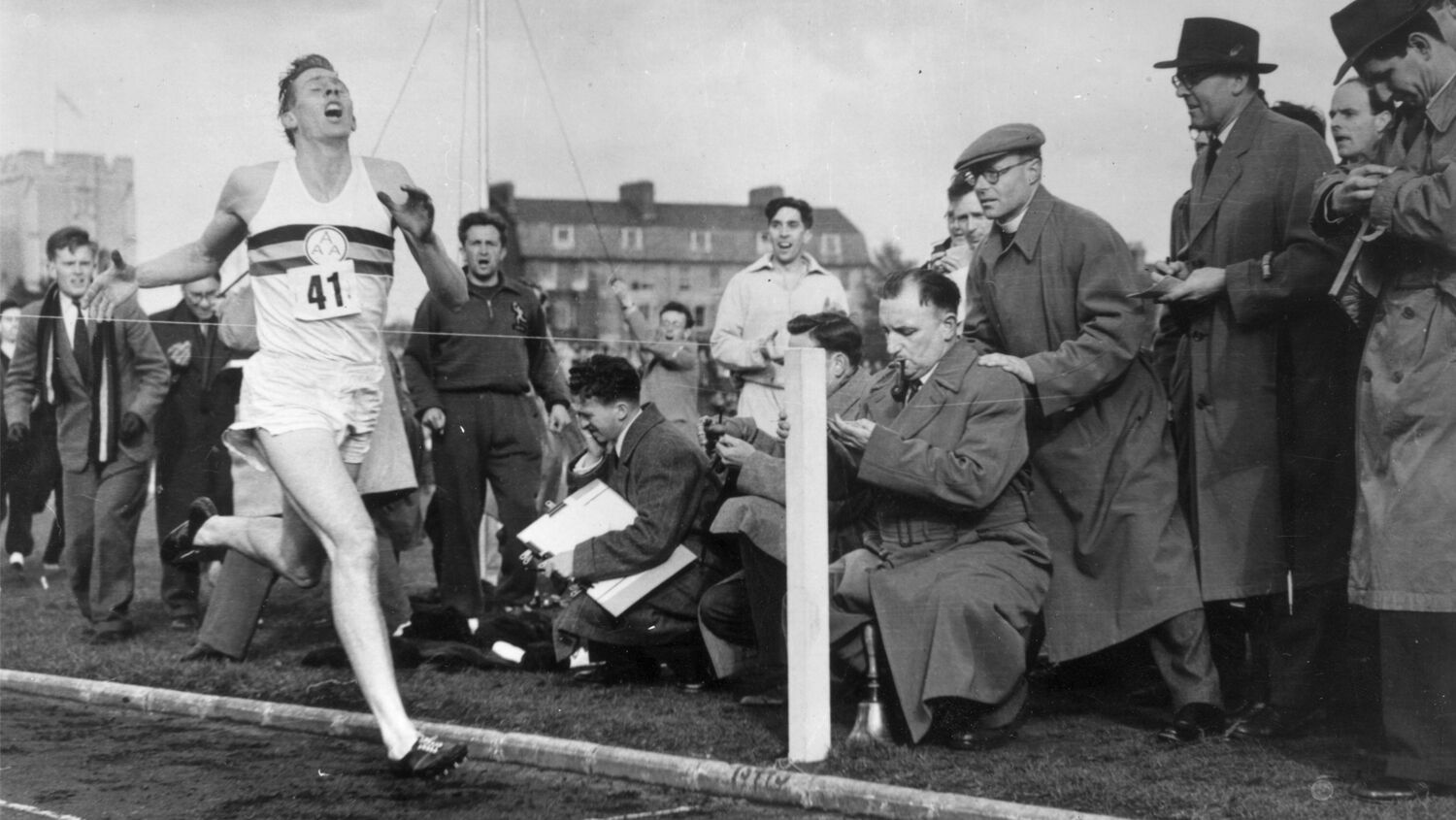 Roger Bannister about to cross the tape at the end of his record-breaking mile run at Iffley Road, Oxford. He was the first person to run the mile in under four minutes, with a time of 3 minutes, 59.4 seconds.
Getty Images

Many people once thought running a mile in under four minutes was impossible—until Roger Bannister stepped onto the track.

The 4-minute mile. There was something almost mythical about it. Four perfect laps, four perfect minutes, one perfect mile. No one in recorded history had ever run a mile in 240 seconds. Many physicians, commentators and athletes thought that the human body was incapable of running fast enough, long enough to break that barrier.

Then Roger Bannister stepped onto the Iffley Road Track in Oxford.

Bannister had grown up in a regular working-class family in greater London. He was a smart young man who wanted to study medicine, but his family was not wealthy enough to pay for his education.

He discovered that he had a talent for running, and he decided to use this talent to further his education, eventually obtaining a track scholarship to Oxford University.

The dream of middle-distance runners was to beat the 4-minute mile. But many of them gave up. They believed it couldn’t be done, by themselves or possibly by any human being. The Swedes thought that beating four minutes was impossible. The world’s fastest miler, Australian John Landy, repeatedly hit 4:02, and admitted that it was like hitting a brick wall (Oxford University interview).

“As a medical student, it didn’t seem to me logical that it was not possible to knock off a couple of seconds,” Bannister said. He believed the barrier was psychological and that it was inevitable that it would be broken. So he went after it with a passion! Like the other runners trying to break the world record, he was an amateur, someone who earns his living doing something besides running. But unlike the others, he was carrying the academic and workload of a medical student. So he would squeeze in his training during lunch break and after hours, meanwhile studying medicine and working at St. Mary’s Hospital in London.

While attending Oxford, Bannister competed in the 1952 Olympics. At that time, he was considered one of the best runners in the world, if not the best. Everyone in the United Kingdom expected Bannister to win. But according to an article by Joel Runyon, some unexpected changes were made at the last minute that disrupted Bannister’s routine. He came fourth.

“Well,” Bannister said, “I had failed in the 1952 Helsinki Olympics …. I was very disappointed with myself, the team was disappointed in me and also the British public. By then it was getting difficult to combine sport and my medical studies, so I had the alternative of retiring feeling dissatisfied or going on for two more years when there were the Commonwealth games and also the chance perhaps to break the 4-minute mile. So those are the reasons why 1954 became important to me, and it was my last opportunity before having to retire.”

Rather than give up and quit, Bannister “decided to use his pain and humiliation to drive himself forward and push his limits” (ibid).

It would have been much easier to use his pain and humiliation to retire from running and move on with his medical career and the rest of his life.

“Yes, 9 in 10, at least once or twice in a lifetime, come to the place where they appear to be totally defeated!” the late educator Herbert W. Armstrong wrote in The Seven Laws of Success. “All is lost!—apparently, that is. They give up and quit, when just a little more determined hanging on, just a little more faith and perseverance—just a little more STICK-TO-IT-IVENESS—would have turned apparent certain failure into glorious success.”

“To be a record-breaker,” Bannister later said, “I think that you have to have determination, and you have to be prepared for upsets and reverses, which I certainly had in my career” (emphasis added).

After his defeat in 1952, Bannister intensified his training. The more he trained, the more time he shaved off his personal best. The same was true with Landy, his archrival. These two men were making the impossible now seem possible. It now seemed to be not a matter of if someone would break the 4-minute barrier, but when—and who.

Bannister’s opportunity came on May 6, 1954. The experts believed he would need ideal conditions to break the barrier—no wind; a nice, hard, dry track; tens of thousands of cheering fans. But May 6 was not that kind of day.

“The main memory was whether the weather was too bad for me to even attempt it,” Bannister said. “If you are running with a high wind, and a sticky track, then your time would have to be four seconds faster than it would be on an ideal day. And I was watching the flag on the church, and just on the Iffley Road north of the track, and it was fluttering very strongly—but then just before we decided to have the race, it fluttered less strongly, and I realized that the weather was improving perhaps enough to make the full effort. And so I told Chris Brasher and Chris Chataway, It’s on.”

Bannister knew that the conditions were not ideal—but if he didn’t break the record that day, Landy probably would soon after. So he entered the race with five other runners. The starting pistol sounded.

Following pace-setters early on, Bannister clocked in at a little over three minutes after three laps. He needed a strong kick for his final lap in order to break through. The pace-setters lost steam and fell back. Now it was just Bannister, imperfect conditions, 59 seconds, and the impossible.

Bannister sprinted past the finish line, the clock stopped, and the announcer reported the result: “In a time which, subject to ratification, is a new track record, British Native record, British all-comers record, European record, Commonwealth record and world record … 3 minutes ….” The crowd roared. Later they would hear the actual time, the world’s new record of human achievement in the mile: 3 minutes, 59.4 seconds!

Two years earlier, Bannister was about to retire from running. But on May 6, 1954, he was the fastest miler in recorded world history! He had inspired the British public and the world. He had smashed through an unbreakable barrier, clearing the way for many others to follow. Today, the world record for the mile run is under 3:43!

Sir Roger Bannister, noted neurologist and history-making runner, died last month at the age of 88. It is impossible to see what this man accomplished and not think of what Paul wrote in 1 Corinthians 9 about the race of a Christian: “Know ye not that they which run in a race run all, but one receiveth the prize? So run, that ye may obtain” (verse 24).

Paul is saying, Run the race to win it! That takes a lot of hard work!

“And every man that striveth for the mastery is temperate in all things. Now they do it to obtain a corruptible crown; but we an incorruptible. I therefore so run, not as uncertainly; so fight I, not as one that beateth the air” (verses 25-26).

Paul knew where he was going. He wasn’t running his race uncertainly—he knew the course and headed straight for the finish line, spiritually speaking. He understood the difficulties, the obstacles and the foes along the way. He put forth his maximum effort to win the race.

Forget about if the conditions are less than ideal, or if you have had setbacks in the past—just press toward the finish—toward the prize! God is offering an incredible reward to Christians who run this race (verse 14).

Train hard, train long, push through failures and setbacks, take on imperfect conditions, be temperate, strive for the mastery, and press forward for that prize!