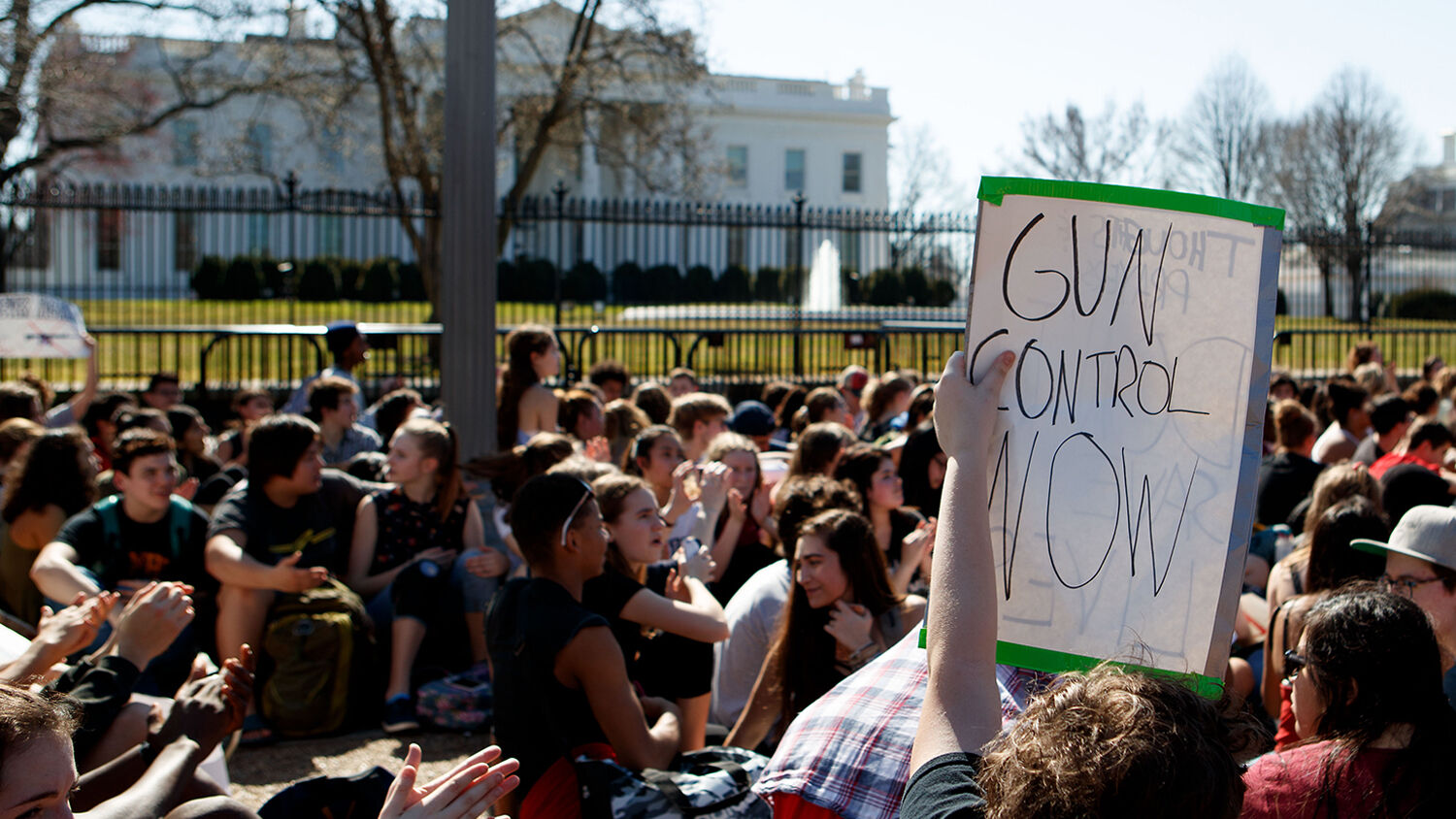 After the shooting at Marjory Stoneman Douglas High School, mainstream media began pushing for gun-control reforms. Is this the solution to America’s problems?

After 17 people died from a school shooting in Marjory Stoneman Douglas High School in Parkland, Florida, on February 14, cnn sponsored a town hall discussion for those affected by the shooting. The televised event on February 21 put several students from the high school up on a stage. cnn named the event “Stand Up: The Students of Stoneman Douglas Demand Action” and promoted it as if it were an open forum for community discussion. In reality, it was an advocacy event for gun confiscation.

Brandon Minoff, an 18-year-old student who attends Stoneman Douglas, was quoted in an article at the Daily Caller saying that the media immediately politicized the tragedy. “It seems that gun-control laws is the major topic of conversation rather than focusing on the bigger issue of 17 innocent lives being taken at the hands of another human,” he said.

Minoff also told Fox News that the entire day after the shooting “cnn was interviewing gun experts and specialists to brainwash the audience that gun control is a necessity.”

He also revealed how they are using teenagers to promote their anti-gun agenda: “They even have an army of my classmates trying to persuade other students that guns are unnecessary and should be illegal.”

The same day as the town hall meeting, cnn further exposed its bias by tweeting:

Here are the 71 Florida lawmakers — all of them Republicans — who refused to vote for an assault weapons ban, along with their NRA rating https://t.co/GiwvTdwzZy pic.twitter.com/jUFUSuXSea

cnn wanted people to know about all of the lawmakers who didn’t vote for a ban on “assault” weapons. It even revealed all of their ratings from the National Rifle Association, because, from its perspective, Republicans and the nra are the ones responsible for the tragedy—not the demon-possessed mass murderer!

Some Republicans and youth spoke up against this biased agenda during the town hall discussion. But they, along with nra spokeswoman Dana Loesch, were shouted down for most of the evening.

I was astounded by a statement made by 17-year-old student Cameron Kasky. Kasky told Florida Republican Sen. Marco Rubio, “It’s hard to look at you and not look down the barrel on an AR-15 and not look at Nikolas Cruz ….”

Here was a teenager equating his state’s United States senator to a mass murderer! The crowd cheered. And the moderator said nothing. None of the adults in the room challenged the teenager.

The day after the cnn gun-control pep rally, we learned about all of the missed opportunities law enforcement officials had to prevent the teenage psychopath from carrying out the atrocity.

During the town hall meeting, Sheriff Scott Israel clearly positioned himself on the side of the leftist gun-control advocates. According to Israel, 19-year-olds shouldn’t be able to purchase rifles. He also said that what would help law enforcement agencies prevent massacres like this is more power from the federal government.

National Rifle Association spokeswoman Dana Loesch challenged the sheriff. Why didn’t he use the power he already had to stop the tragedy? There were so many red flags! This was a killer who bragged online about becoming a “professional school shooter.” He had threatened the lives of fellow students. He had brought weapons to school. Law enforcement officials visited the killer’s home dozens of times before the tragedy because of the many complaints and disturbances. “And you couldn’t pull this guy off the streets?” Loesch asked. “Thirty-nine visits did not meet that standard? Thirty-nine visits, assaulting students, assaulting parents, taking bullets and knives to school—did that not meet that standard?”

“This is what I’m talking about,” she said. “We have to follow up on these red flags!”

The Broward County law enforcement officials had all the power they needed to lock up this monster! The sad truth is that something actually could have been done before this shooting. But nothing was, except a few slaps on the wrist.

And now we know that the police also had firepower onsite while the mass shooting was happening—but the armed deputy on duty waited outside the school until the massacre was over!

According to Sheriff Israel, the deputy “was absolutely on campus through this entire event,” but he never entered the building, despite knowing there was an active shooter on campus.

After this startling revelation, Sheriff Israel told reporters he was “devastated” and sick to his stomach by the deputy’s inaction. He said that the deputy definitely should have confronted the killer.

What amazes me is that for eight years during the Obama administration, the major media attacked local law enforcement agencies time and again for what they viewed as excessive force or maybe racial profiling.

And here we have clear negligence on the part of local and federal law enforcement agencies—before, during and after this unspeakable tragedy—and now the media are busy defending law enforcement even as they trash Republicans and the nra.

In her recent article, “Amazing Breakthrough to Reduce Mass Shootings,” Ann Coulter wrote about why the fbi could have easily missed the many red flags on Nikolas Cruz. The fbi has millions of people on its watch list, thanks, in part, to millions of unvetted immigrants who are streaming into America.

These facts, however, do not faze the activists who seemed to be obsessed with repealing America’s Second Amendment. During the town hall meeting, a history teacher from Stoneman Douglas called into question the wisdom of Americans’ right to bear arms. The history teacher! She’s the one “teaching” these left-wing teens about America’s Bill of Rights.

The Founding Fathers thought this amendment was so important that they put it second—right after the amendment that protects free speech, freedom of the press, freedom of assembly and freedom of religion!

Notice what my father said concerning the Second Amendment in his booklet America Under Attack:

The Second Amendment in the U.S. protects the people’s right to bear arms, but for what? If you listen to the left, you would never know. To hear them talk about it, its purpose is so Americans can go out and shoot deer.

That isn’t the reason for the Second Amendment at all. The main point was to protect the citizens from government tyranny. The government might decide to take over, and if you don’t have guns or something to defend yourself, what are you going to do (unless you have God’s protection)?

America’s Founding Fathers were not ignorant of this history. They established this nation on the belief that the freedom of individuals should be maximized, and that they should control the government and not the other way around. That is why they established the Constitution and the Bill of Rights, including the Second Amendment. Do our young people remember and understand the sacrifices it took to obtain the freedoms we enjoy today?

How many American adults even know about this history anymore?

In a Key of David program from over 10 years ago, my father explained the root cause of mass shootings:

The same Founding Fathers who established the Second Amendment also knew that freedom would not be preserved unless the American people held fast to religion and morality. They understood that people owning guns to protect themselves from government tyranny was not the main factor that would keep them free. They knew that Americans would only be free as long as it held to the principles of biblical morality.

Human nature and the god of this world (2 Corinthians 4:4) are the cause of all the evil that we see in this world, and the solution is to get back to God’s law! That is the only way out. Gun control is not going to solve the problem. Man’s evil nature needs to be changed.

If you would like to learn more about this subject, you can listen to my recent Trumpet Daily Radio Show podcast or request a free copy of my father’s booklet America Under Attack.