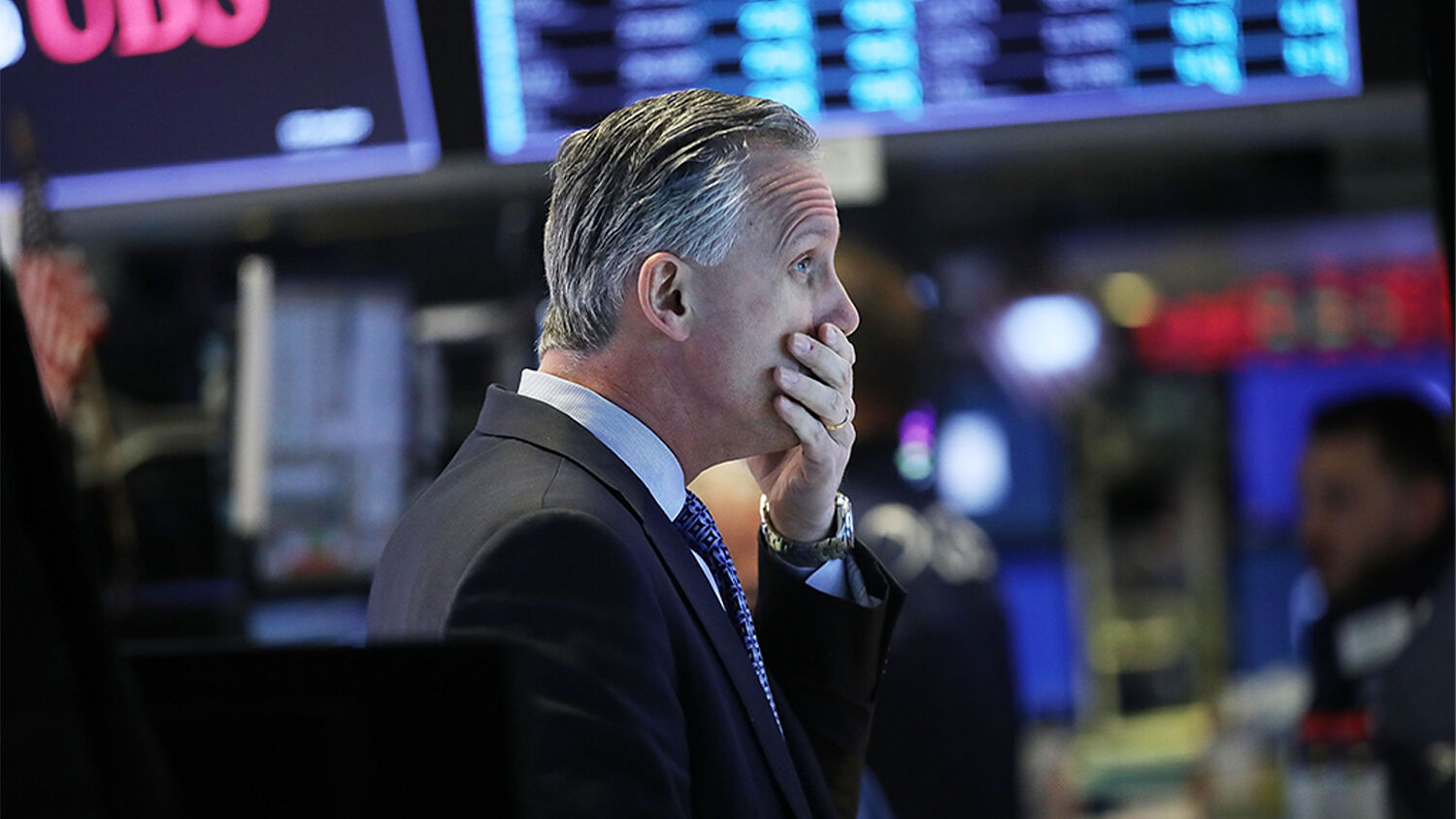 A trader works on the floor of the New York Stock Exchange.
Getty Images

Market jitters are a harbinger of things to come.

On Monday, the United States stock market plunged by 1,175 points, making it the worst day of trading in six years. The 4.6 percent decrease wiped out all gains made in 2018 and sent investors running. At one point, the market had fallen 1,600 points, before bouncing back. On Tuesday, panicked investors waded back into the marketplace, and by the end of the day, stocks were up 1.7 percent.

For the past year, all eyes have been on the stock markets, thanks to U.S. President Donald Trump. Since becoming president, Trump has pointed to the hot stock market as a sign of the success of his administration. During his one year in office, the market has smashed records and added nearly $6.9 trillion in market cap. That’s close to half of what was added in the eight years Barack Obama was president.

Monday’s loss comes as the first major blow to the smooth stock markets under President Trump. Jitters began creeping through the marketplace on Friday, February 2, when stocks fell 665 points, a precursor to what happened on Monday. News broke that day that the U.S. created more jobs in January than expected, and that wages saw their biggest jump since 2008 when the economic crises hit. At the same time, U.S. Treasury yields increased, as did the value of the U.S. dollar.

Those are all good developments, but the market plunged. Why?

All those factors put together signal that a period of inflation could be on the horizon. Higher wages mean higher costs to produce goods. To help prevent inflation from running away, governments will raise interest rates to restrict the flow of money in the economy.

It was the fear of inflation and rising interest rates that sent investors fleeing from the stock market on Monday. Hussein Sayed, a currency dealer and market strategist, said, “The era of cheap money is ending, and for markets who got addicted to it, it’s undoubtedly bad news.”

Interest rates have been at record lows for the past decade as the U.S. allowed easy access to money to help prop up the economy. Individuals and companies could borrow with little worry since interest payments were meager. Now that the economy seems to be recovering, the government has to consider raising interest rates to stave off inflation.

Cheap money has led to a hot, overvalued stock market. Any increase in interest rates would put a squeeze on that market. Fearing a loss in their investment, investors simply dumped stocks. As Stratfor pointed out, “[A]fter years of quantitative easing, the bubble received a small puncture and global prices rapidly deflated—though, thus far, only to a manageable degree.”

What happened on Monday was what most financial commentators view as a market correction, cooling down inflated stock values. The question now is, Was this a one-time event or will there be more wild swings? Stratfor noted:

The next few weeks may well demonstrate that the two-day plunge was merely an anomaly and that stock markets will recommence the steady upward plod that has become so familiar in recent years. But even if that is the case, and this proved to be just a temporary market event, there are some indications that the market’s roller-coaster ride might be an important harbinger of future behavior.

If the stock market is indeed propped up by debt, future interest rate hikes could send investors running again.

The biggest story, and the most concerning to America, is the fact that the U.S. bond market is changing in some big ways. Over the past month, a quiet sell-off of U.S. government bonds has added more uncertainty to markets.

To generate money, the U.S. government sells bonds, which equate to receiving loans from private investors. Someone will buy a bond for a certain time period at a certain interest rate. The government pays out interest each year, and when the bond expires, the government pays back the amount of the bond. These are considered the safest investment you can make. Bonds bring in immediate cash to the government, but also add to the debt.

The bond sell-off means that investors don’t care for U.S. dollars anymore. Interest rates on 10-year bonds rose to 2.8 percent, the highest since early 2014. When interest rates on bonds go up, it means the government is working harder to attract more buyers. It also means that the cost of bonds already issued goes down. Why would you buy an older bond when you can get a newer one with a higher interest rate?

Rising bond rates also contributed to the market plunge on Monday, as investors feared losing on their investments. This is bad news for the U.S. government. If it starts losing customers to buy its bonds, it won’t have any way to finance more debt. Already the government is facing a near $1 trillion deficit in 2018, and much of the funding for the debt comes from new bonds. If interest in bonds continues to slump, the government won’t be able to finance its debt.

The lack of interest in bonds is due to a variety of reasons. The stock market rate of return has been much higher than bonds, luring investors to get rid of bonds for more lucrative stocks. Another reason is that yields on European bonds are rising, also making U.S. bonds less appealing with a lower rate of return.

Even as interest in U.S. bonds is waning, the U.S. Federal Reserve announced its plans to reduce its bond holdings. As TheStreet noted, “The strategy eliminates a key source of buying that has helped to prop up the bond market over the past decade.” Without the Federal Reserve buying up bonds to fund the government, the Treasury needs to find new clients with deep pockets.

Not only is the Treasury losing a customer in the Federal Reserve, it may also be losing one of its biggest customers of all: China. In January, Bloomberg reported that senior government officials in Beijing recommended slowing or even halting purchases of U.S. bonds, causing a bond sell-off. China denied that claim, however, and bonds recovered. But it shows how shaky the bond market is. If China did suspend purchasing, it would strike a huge blow to America. The U.S. needs to sell more bonds to fund its debt, and America would be hard-pressed to find another customer as big as Beijing. China currently owns $1.4 trillion in U.S. government bonds.

Any slump in bonds means that the U.S. debt will increase faster. It means the government has to spend more money on interest payments—which means more borrowing to cover the cost of those higher interest payments.

The Curse of Debt

As the dust settles from Monday’s crash, most news sources point to fears of inflation and rising interest rates as the cause of the crash.

But that is not the case.

For the past 10 years, Americans have had access to cheap money. Low interest rates have meant they could live beyond their means on borrowed money with little consequence. Companies have used borrowed money to increase sales. The government has borrowed at unprecedentedly low rates from its citizens and other nations by artificially propping up its debt with the help of the Federal Reserve. All this has given the illusion of prosperity. In reality, it has revealed how weak the economy is.

Monday’s crash is a sign that the house of cards that is America’s economy is beginning to wobble. It’s not a matter of if it will fall, but when.

Despite President Trump’s claims, a strong stock market doesn’t mean a strong economy. Following the plunge, President Trump took to Twitter to criticize the market for going down on good news. More jobs and more wages is good news on the surface, but all the debt lurking in the background makes it very bad news.

That’s because America’s economy runs on debt. It needs cheap debt to keep going. The U.S. national debt is over $20 trillion. U.S. personal debt is over $18 trillion. In November 2017, U.S. credit card debt hit an all-time high of over $1 trillion. That surpasses the previous all-time-high posted in July 2008, right before the financial crisis of 2008. Student and auto loans are also at never-before-seen records!

The Trumpet has repeatedly drawn attention to America’s addiction to debt, warning of its deadly consequences. Based on Bible prophecy, it has forecast that America will soon suffer total economic failure, collapsing under the monstrous weight of its own debt. Monday’s crash was just another shudder showing that a collapse is coming.

For those willing to listen, there is a way out of this economic collapse. It starts by understanding that God instituted laws of finance. America is cursed because it breaks those laws, along with many other laws of God. If you want to know how you can escape the snare of debt, be sure to study our free booklet Solve Your Money Troubles!