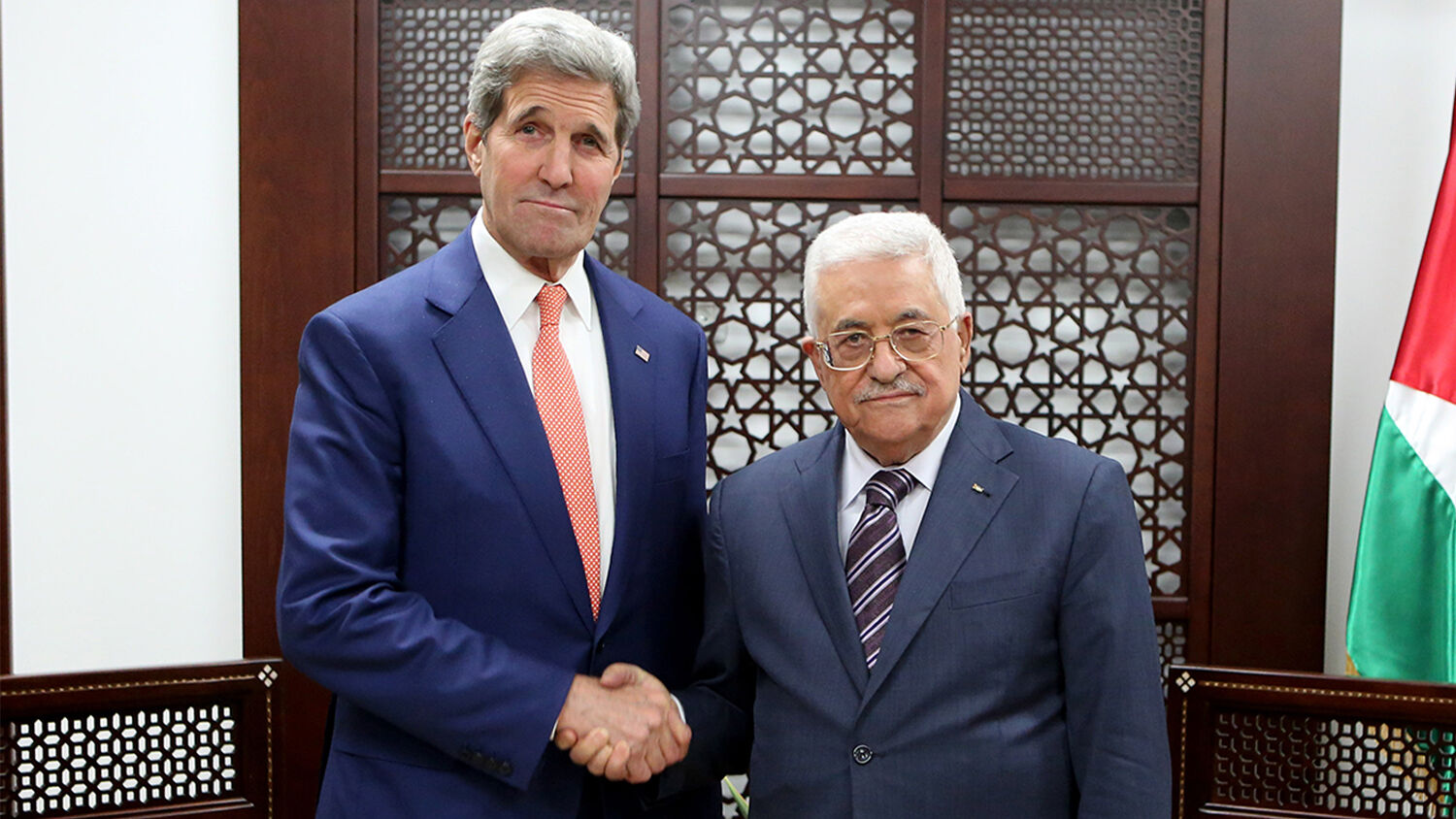 Last week, former United States Secretary of State John Kerry met with Hussein Agha, a close associate of Palestinian President Mahmoud Abbas. In their hourlong meeting in London, Kerry did his best to undermine U.S. President Donald Trump, as well as to destroy the possibility of restarting the Palestinian-Israeli peace process.

According to a report from Israeli newspaper Maariv, which was later published in the English-language Jerusalem Post, Kerry’s message for Abbas was to “hold on and be strong,” and that Abbas “should stay strong in his spirit and play for time, that he will not break and will not yield to President Trump’s demands” (emphasis added throughout).

According to Israeli press coverage, Kerry then said that he didn’t think President Trump would be in office much longer—perhaps no more than a year. He also allegedly urged Abbas not to attack the U.S. or the Trump administration, but instead to focus his attack on Donald Trump himself!

This is a bombshell story. Who could have imagined a situation like this even five or 10 years ago? A former secretary of state is undermining the current U.S. president by encouraging other nations to resist the president’s demands and assassinate his character!

Jerusalem Post paraphrased the report, saying that “Kerry used derogatory terms and even worse. Kerry offered to help create an alternative peace initiative and promised to help garner international support, among others, of Europeans, Arab states and the international community.”

So here we have the previous U.S. administration actively colluding with the Palestinians, Arab states and the European Union, in an effort to undercut a sitting U.S. president! And yet, what do you suppose the news coverage in the U.S. has been like on this story? A quick Google search shows that most mainstream liberal media outlets completely ignored it. Those who have written on it approached it from the standpoint that the conversation probably never happened.

Compare this to the coverage of President Trump’s alleged collusion with the Russians last year. In 2017, coverage of the Russia scandal accounted for a fifth of all media coverage of the president—an astonishing 1,234 minutes of tv time, pretty much all of which was negative. And the media still hasn’t given up on this story. Even last week, there were some new twists and turns in the ongoing saga.

Jerusalem Post continued: “Kerry hinted that many in the American establishment, as well as in American intelligence, are dissatisfied with Trump’s performance and the way he leads America.”

This is a revealing statement. You see, for Kerry and others on his side, the real issue is not Russia collusion or some kind of obstruction of justice. They just don’t like Donald Trump. They are dissatisfied with his performance. And they want him out!

It’s not like President Trump has done everything perfectly, or that he hasn’t made mistakes. But the U.S. Constitution is very clear about what grounds for impeachment are: “treason, bribery and other high crimes and misdemeanors.” It doesn’t say he can be removed if the opposition party is dissatisfied with his performance!

On January 22, Vice President Mike Pence delivered a speech to the Knesset. In that speech, he said, “The United States appreciates your government’s declared willingness to resume direct peace negotiations with the Palestinian Authority. And today, we strongly urge the Palestinian leadership to return to the table. Peace can only come through dialogue.”

Today, former U.S. officials who hate the current administration are actively working to subvert U.S.-Palestinian relations and even destroy the United States—from within! My father writes in his booklet Great Again:

The radical left and its Marxist ideas have gained control of the Democratic Party. …

Communists first corrupt, pollute and agitate from within. But their final phase is a violent overthrow of the government. They aim to destroy the system, because they can’t build another one until that happens.

Can you get any more radical leftist than to tell the Palestinians to ignore the peace process because of an “arrogant” and “sloppy” Republican president? They don’t even try to cover their tracks because they know the media will provide them with all the cover they need.

My father continues: “The Communist attack from within America is far more significant than you may realize.”

The attack from within! That is what brings America down first—what weakens the U.S. and makes it vulnerable to an attack from without. The nations in the international community are taking their cue from the leftist U.S. media. The U.S. itself is leading the charge—against its own president!

Vice President Pence continued in his speech to the Knesset:

But just last month, President Donald Trump made history. He righted a 70-year wrong; he kept his word to the American people when he announced that the United States of America will finally acknowledge Jerusalem is Israel’s capital.

President Trump did what President Barack Obama, President George W. Bush, President Bill Clinton and so many others on the campaign trail said they would do—declare Jerusalem as the capital of Israel. President Trump states that he intends to follow through on this campaign promise, and now he’s the problem. He’s the one who is undermining the peace process.

We need to think deeply about what God says in Revelation 12:9 about Satan being cast down. That evil being has deceived the whole world, and he is now confined to this Earth with millions of demons. He loves to attack the truth. This is the sobering reality of our times! In America Under Attack, my father writes:

When Satan was cast down, he immediately went after spiritual Israel. That was his first target. But he didn’t stop there. After that, he directed his attack against physical Israel. Who is that? Specifically, it is three of the modern nations that descended from the biblical nation of Israel—chiefly the United States, Britain and the Jewish state.

Did you catch that? The modern nations of Israel are his primary target! Chief among those nations is the United States of America. The United States is a massive target in the eyes of the devil, and you can see him actively working to bring down not just one man, but the entire nation!

Can you see the devil’s fingerprints? This attack from within is far more significant than you may realize.

To understand more about this subject, please read America Under Attack and Great Again. These two booklets explain the current political climate in the United States and why truth is being cast to the ground.